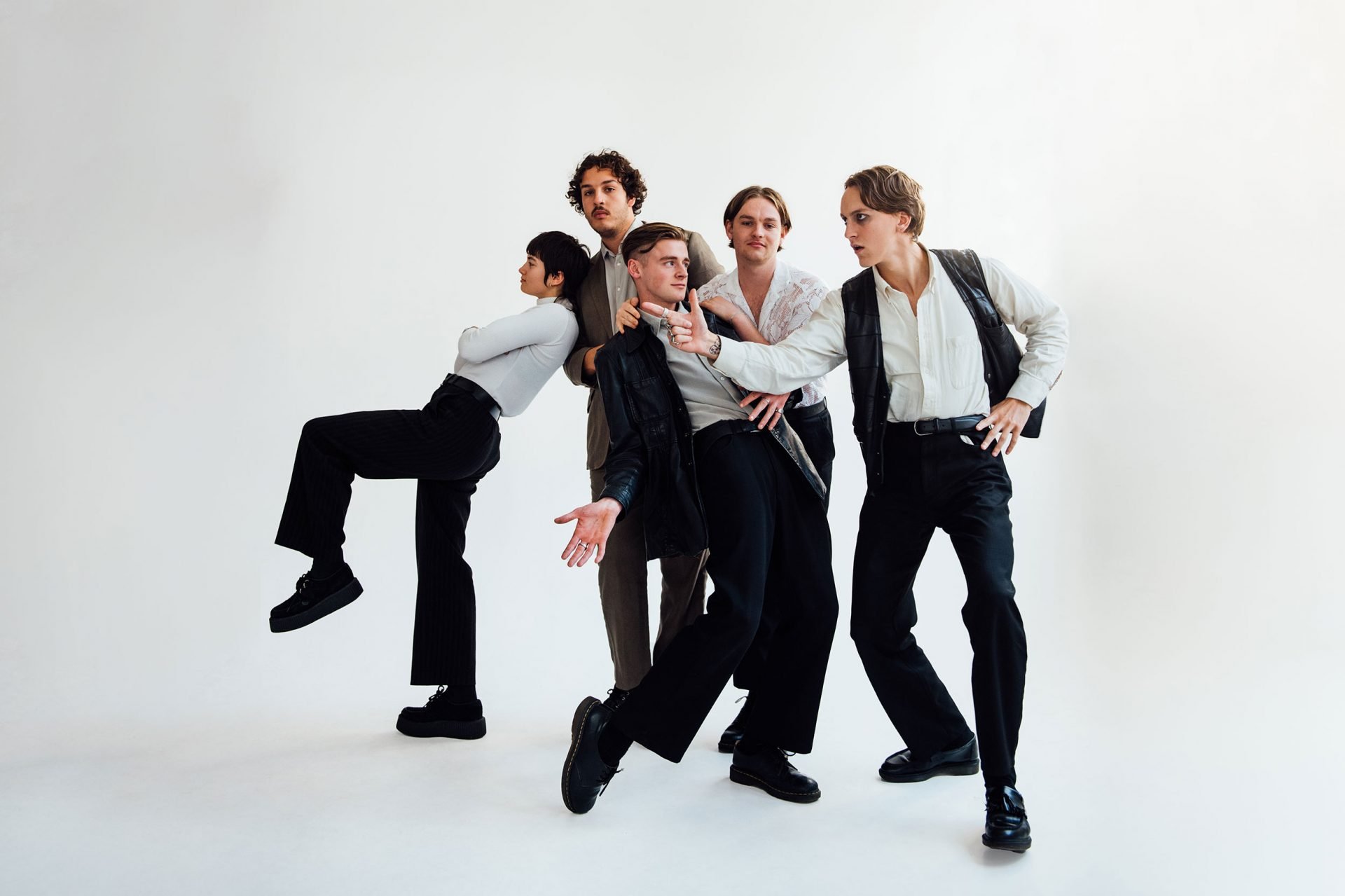 The Best New Live Band On The Planet is perhaps a bit of a lofty title, Dear Reader. We know. But for Priestgate, it’s pretty damn accurate. Their shows have you falling into their glorious world of spinning new-wave, dream-pop, punk, indie-pop, and so much more.

“It’s funny because when I’m onstage, that’s when I’m the most calm,” explains frontman Rob Schofield, reflecting on a live show full of barnstorming energy. “Being animated onstage and stuff felt right for us and our music. Some bands can do the whole head-down, sunglasses-on vibe for an hour, and it’s the best thing ever. We tried that, and it didn’t feel organic at all – we just looked like a band trying to be The Strokes!”

If there’s anything Priestgate are not, it’s heads-down and sunglasses-on. “Some bands can do that, and it’s amazing,” continues Rob, “but we’re not like that as people, either. I feel like there’s this whole thing about being in a band where people feel like it has to take over your entire life, but I don’t think it should be like that.”

Instead, Priestgate is very much an extension of five mates dreaming of something bigger. They’re not here to wait for you to stumble across them; instead, with one simple click, they’ll be your next favourite band and leading their own glorious revolution.

That larger-than-life energy serves as a reaction to the years growing up in Driffield, a small market town in Yorkshire where “there’s stuff to do if you like playing pool and drinking pints of piss”. The idea of being in a band together, something that doesn’t happen in a town like Driffield, was spurred on by a dream that bound Rob, Bridie, Connor, Isaac and Kai together.

“It was such a weird thing to happen in Driffield,” recalls Rob. “We liked that idea of being in a band together – of making something of it and doing it together. It was an excuse to just get off my arse and do something.”

The reality that’s come from it has been life-changing. “For all of us, it really helped us to learn to like socialise with people, y’know? In a band, a lot of it is speaking to each other and different people, and we’ve all grown a lot in the sense that through this band, we’ve all become more confident. I think that’s the case for a lot of other people – they don’t have this confidence about them, but they can find confidence through the music.”

Not knowing how to play an instrument at the time, Rob quickly found himself as the singer. Bonding over acts like DIIV and the blending worlds of two lead guitars, it opened a box for which Priestgate could form and morph. Trading off natural instinct, they’ve gone about carving out their own special place on Planet Pop. After early singles ‘NOW’ and ‘Summ(air)’, debut EP ‘Eyes Closed For The Winter’ arrived early in 2022 like an opening pick-and-mix box of every flavour and ingredient which makes up their ever-expanding world. Tracks written from one-liners heard when out and about, or stories they’ve garnered from modern life melded with sheer exhilarating release. It’s mirrored in a drive which catches them always looking forward and always looking for the new.

“It’s weird because when you first start a band, you’re like – one day, we’re gonna do this stuff, and it’s gonna be amazing. And then when it comes, you’re sort of thinking about the other stuff. Stuff keeps happening!” explains Rob. “Looking ahead to next year and doing this and that and then what’s next. You’ve always got to be looking at what’s next and what we can bring to the table now.”

For Priestgate, it’s about breaking away from any boxes or expected standards that may come their way. With a melting pot of music tastes comes the freedom to explore anything they want. It’s shown in every release they’ve put out so far for a band that have “always just tried exhausting all our options for the most part. It’d be really nice to do the whole Nirvana thing where you write a song in 10 minutes, and it be like the best song ever,” laughs Rob. “But as a band, we very much like to marinate songs in a sense. Put them in a fridge and let them sit for quite a while.”

After a year that has seen them take to stages up and down the UK, they’re absorbing every moment. “The band we are now, we don’t want to be this band in two years, y’know? We always want to push ourselves.”

Take latest single ‘Some Things Never Change’. While that shining Priestgate DNA is there, it’s yet another tweak and evolution for a band aiming to keep the world firmly on its toes – a pumping 80s drive-time groover that sits somewhere between Depeche Mode and Blur.

“Each song has this reason to exist; that’s definitely what we’ve realised. We never saw it as a single, unlike something like ‘Bedtime Story’, which felt like a single from the start. We feel songs should exist in a variety of different ways and for a variety of different reasons. We’ll always try and turn over as many leaves as possible to get there. To get to that next step.”

Watching them live, you’re left with no doubt. With enough ripped vests already in their gig history, it comes from a feeling that very few new bands have right now. Each show is another step towards the big leagues, a blistering tour-de-force of energy and devotion.

“It’s slowly but surely turned into what it is now,” details Rob, recalling homecoming shows at The Polar Bear in nearby Hull, Wild Paths festival in Norwich and a slot at Brighton’s Green Door Store at The Great Escape being particular highlights. “There’s been a lot of practising stuff in the mirror and asking Isaac – does this look cool when I do this? We’re gonna write a book at some point. ‘A Guide To Priestgate: 5 Yoga Moves With Rob Schofield’. That’s where the money is at.”

There’s a place for all in the world of Priestgate. A band continually learning but possessing that elusive sense of magic in their every move. “It can be really easy to get caught up on accolades and all that stuff, but that can get quite unhealthy, y’know?” Rob notes. “I feel like that’s where ego comes from. When you start thinking – we’re a band. We’ve done this, you owe us this, when actually we owe everything we have to people who are checking us out and coming to the shows. They’re the ones listening to the music, and if nobody was listening, then well… we wouldn’t be a band, would we?”

As word spreads, the possibilities of Priestgate feel endless. At the moment, the band are writing “some slower stuff, so it might get a bit weird if I started doing like karate kicks to them live,” laughs Rob. “I’m going to need to practice some slower-paced moves for that. Maybe a really slow roly-poly or army crawl over the stage for 10 minutes. I’ll have a think.”

Until then, it’s all about showcasing to the world a journey that began as a way to reach for more than their small-town surroundings. “I guess we want people to just see that we’re enjoying it. It’s an unbelievable privilege to be able to do what we do, and for people to want to come along and see us – even when they’re not there to see us, we don’t take that for granted ever,” states Rob. “I want people to get that both from us playing live and through our recorded music too. It’s fun for us to play with what Priestgate could be or what Priestgate is, or what Priestgate will be. We don’t know where any of these places are yet or what they’ll sound like, and I think that’s the fun. The mystery of what Priestgate will be in a year. That’s what’s fun about bands. That’s why bands are so interesting. Plus… if you don’t like it, there’s always the old stuff!” he laughs.

“I read an interview with Kevin Parker from Tame Impala, and he was like – the fact I don’t know what I’m doing is what makes this really interesting,” Rob continues. “It’s that sort of mystery I really like.” ■