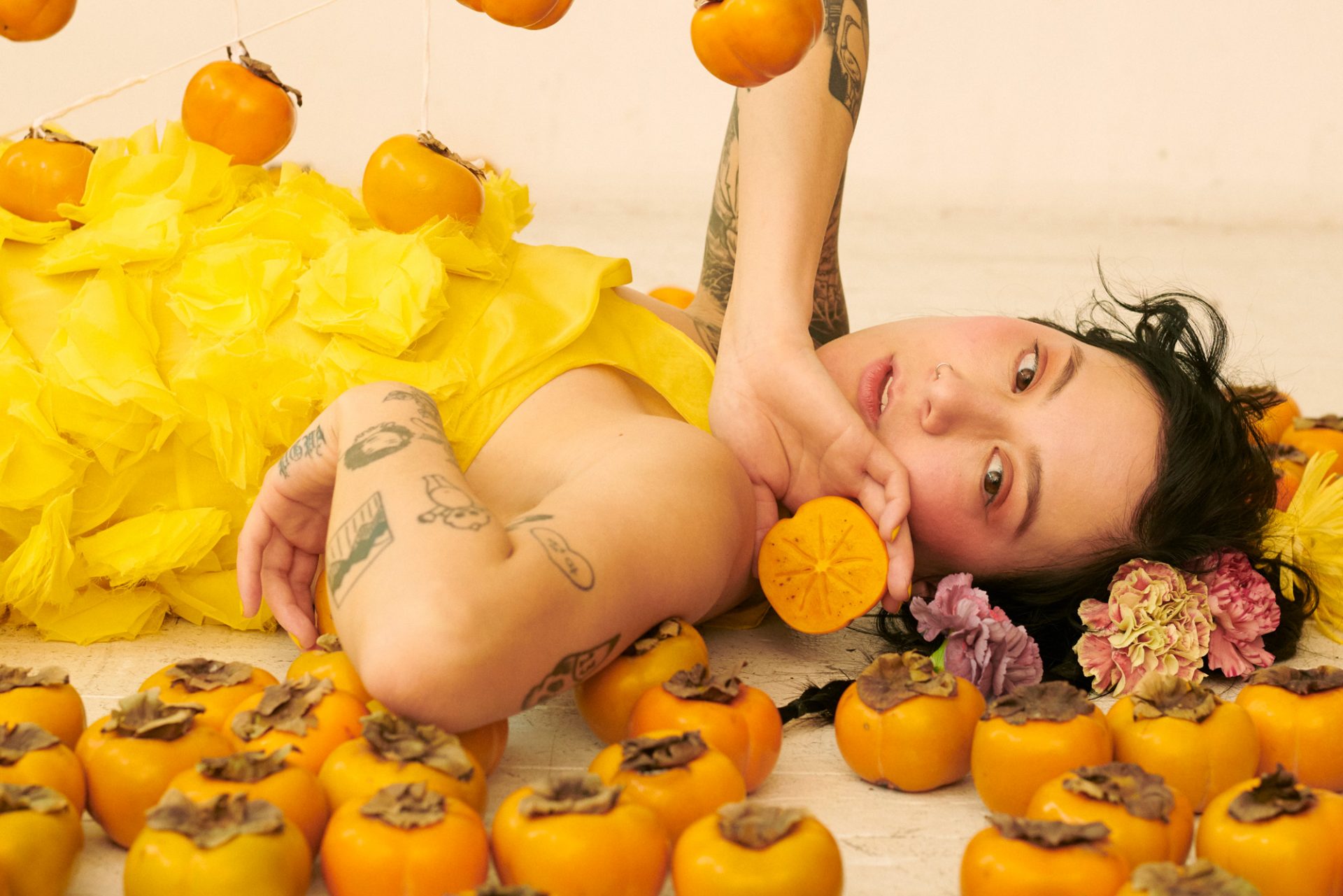 With a new outlook, a revolutionary new record and even An Actual Book, Japanese Breakfast’s Michelle Zauner is in full bloom.

There’s a line in the song ‘In Hell’ from ‘Jubilee’, Michelle Zauner’s third album as Japanese Breakfast, where she sings passionately and clearly, “There’s nothing left to fear.” After five years navigating her way through trauma and grief and documenting it through her music, Michelle has come out the other side with a stunning record that reshapes Japanese Breakfast as an artist and forges a new path for a brighter future.

“It feels like a new chapter for me because my narrative as an artist is so rooted in grief and loss,” begins Michelle as she talks about the years immediately following the death of her mother and the two albums she made documenting that period, 2016’s debut ‘Psychopomp’ and 2017’s ‘Soft Sounds From Another Planet’. “I wrote two albums that were largely about losing my mum and also an entire book about that experience. I’m looking forward to changing that narrative and putting something out into the world that will be unexpected for a lot of people.”

The book she talks about is Crying In H-Mart. Available this summer in the UK, it talks candidly and tenderly about her early childhood, her Asian American heritage and coming to terms with and dealing with her mother’s illness and death from cancer. As you would expect, it’s a subsequently deep but compellingly beautiful read that is touching and illuminating in equal measure. It’s a work in keeping with Michelle’s whole career in which she has constantly challenged herself and pushed herself to keep on creatively going forward. It’s a drive and ambition that was nurtured in her time in a band back in the early 2010s that set the subsequent decade of invention in motion.

As Little Big League morphed into Japanese Breakfast and Michelle spun out on her own, she traversed dealing with personal turmoil with a gradual but significant ramping up of her music career. “It’s wild to see how things have grown. It wasn’t looking too good for me, so I’m really glad it turned around since I hit 25, and it’s been a slow growth from there. Now it feels like an explosive time,” says Michelle, who turned 32 this year. “For so much of the last 6 years, I’ve just been head down working as hard as I can and trying to push myself to be a better composer, arranger and producer. We started touring in a minivan with three people. Three changed to four people, and four people changed to a 15 passenger van. In two months, we’ll be on a bus with nine people and a six-member band. Similarly with the music video budgets, I started with $500 and borrowed gear from a friend’s house, and now we’re doing these huge videos like the new one with Michael Imperioli from The Sopranos,” she continues. “Everything has been a series of step-ups. It’s pretty exciting, but sometimes it’s hard to appreciate it because you’re just so busy thinking, ‘don’t fuck it up’. The first song on the album ‘Paprika’ is about reminding yourself to enjoy what you’ve built sometimes.”

‘Jubilee’ marks both a culmination and a revelation. “I knew that I wanted to write about something different,” says Michelle. “I even wanted to do that with ‘Soft Sounds’ because ‘Psychopomp’ was so personal, and it was tough to do interviews all the time about unpacking my trauma, so I was like, ok, I need to write an album about space,” she laughs. “It was hard for me to not write about my mum because she had just passed two years before, and I wasn’t ready to let it go. I said everything I needed to say about the experience in my book, and I was finally ready to move on. I had the title ‘Jubilee’ in my head for a while, so I knew I wanted the album to be about joy.”

An album rooted in positivity and seeking and enjoying pleasure once again called for a bigger, brighter and more powerful sound, so Michelle once again broadened her musical palette incorporating brass, strings, and a huge dynamic sound to complement the songs.  “I was conscious of it being a third album, and I wanted it to be really theatrical and bombastic,” she says excitedly.

That positivity manifests itself beautifully on the album’s lead single ‘Be Sweet’. It’s an opening banger that immediately says this album is going right for that pop sweet spot. The pop Michelle is aiming for is delivered in her own unique way, though. ‘Be Sweet’ is such a radio single, but the rest of the record is really different, she explains. “I’ve always naturally been interested in pop music. I didn’t want to set out and make a pop record, though. It is still a really strange album.” The strangeness she talks about is what makes the album so compelling. For Michelle, she was channelling someone who remains an icon of otherworldly pop. “I was specifically influenced by Kate Bush and her ability to have mass appeal but also be so bizarre and very surreal and idiosyncratic,” she says. “I wanted to lean into those parts of myself and find what made me a strange writer and not just a pop writer. Why did so many people love Kate Bush? ‘Wuthering Heights’ and all of her songs are just so weird. It’s not like Madonna. You can get why Madonna has mainstream popularity, but Kate Bush is just a weirdo. It’s strange how she was so beloved and widely embraced while managing to be so nerdy and weird. I really loved that about her. You don’t have to compromise your vision into something palatable to have mass appeal.”

Michelle’s vision is present in every aspect of the record. From the songs to the artwork to the accompanying visuals. The songs are primarily about seeking a better future but doing it in a way that is personal to you. “It is an album about joy, but it doesn’t mean that all the songs are happy,” clarifies Michelle. “They are all about trying to be happy or trying to protect happiness. Or even struggling to be happy.”

Her book has passages featuring Michelle questioning in the immediate wake of her mother’s passing whether or not she would ever feel pleasure again or whether it would be even right to consider feeling that way. “The songs on the album deal with how you can work through that and come out the other side. I think it’s about recognising that achieving joy is a constant human struggle,” she says. “We all lead our lives trying to find that and trying to carve out that rare moment. This album was giving myself permission to feel joy for the first time. I felt ready to embrace feeling in this way. The last record was about disassociating and protecting yourself from overwhelming emotion. Almost seven years have passed since my mum died, and I feel like a really different person.”

A curious aspect about the album is that the record was done and completed in 2019 but held back due to the pandemic. It leaves Michelle with something of a different attitude to the album as she thinks back. “I like the record more with this perspective,” she ponders. “I feel more confident in it. It feels like no one can hurt me because I like it, and I’ve sat with it for a year. I feel shielded. I have a better understanding of what the record’s about because I’ve lived with it. I might have been more unsure if we were going into it when it was supposed to. I’m so glad we waited because it feels like the right time to release this kind of record.”

There are some perks of the job that she misses, though. “At the time, it was really sad because I was really looking forward to my press trips to Europe when the label flies you over to London or Paris and spends your money to put you over there and talk to like eight people a day by a canal or something. I was really depressed about not getting to do that,” she laughs. “Now I’m like, what a petty thing to be upset about. Now that enough time has passed, I’m just happy that it’s fucking coming out.”

Hugely prolific Michelle has used the enforced shutdown of the pandemic to indulge in some of her other passions like composing for video games and creating videos, but the first few months of the year were tough. “I desperately grasped at straws to busy myself,” she says. “I tried to practice piano and become a better musician. It was tough, though, because I had just finished a book and a record, so I couldn’t take on too big of a project before letting go of those babies first.”

The release of her book has perhaps given her most pleasure as she looks back on the process with clarity. “It didn’t feel like it was important; it just felt necessary,” she says of the impetus to write. “I needed to purge what had happened and make sense of it. Now I see that it is really important for me to have let this go and document it. I didn’t realise how nice it would feel to see my mum’s paintings in the New York Times or photos of my mum on the Daily Show. All this stuff came later, and I realised I was immortalising my mum in a way. It feels great to say that I’ve written a book.”

And then, after writing a book, she immediately wrote and recorded an album. There’s that driving ambition in full effect. “I was so happy for that change of pace,” she says of the different process making music compared to writing. “I had never written a book but had made a series of album’s by that point, so it was jumping into a familiar bed. It was so insular, isolating and hard to write this type of book, so it was like, oh my God, now I get to go play with my friends. It was such a relief, and I was able to go into the album process with a lot more joy naturally.”

For Michelle and her project as Japanese Breakfast art is all-encompassing. She lives it every day. A key component is the visuals to accompany the songs. A task that is hugely challenging but massively rewarding. “The scale of it is so large. It’s pretty exhausting,” she says of the music video process. “I go back and forth from enjoying it to not because it’s just so much labour and so expensive. It’s the highest mountain to climb in the arts, in a way. Everyone can watch something. If you can figure out how to do that, you can do anything.”

Yes, indeed you can do anything as Michelle has shown time and time again in a decade of music and creation. ‘Jubilee’ is the blossoming of an artist exploring new ground and radically shaking things up, showing that there’s always hope and you can once again capture joy.

Taken from the July 2021 edition of Dork, out now. Japanese Breakfast’s album ‘Jubilee’ is out now.