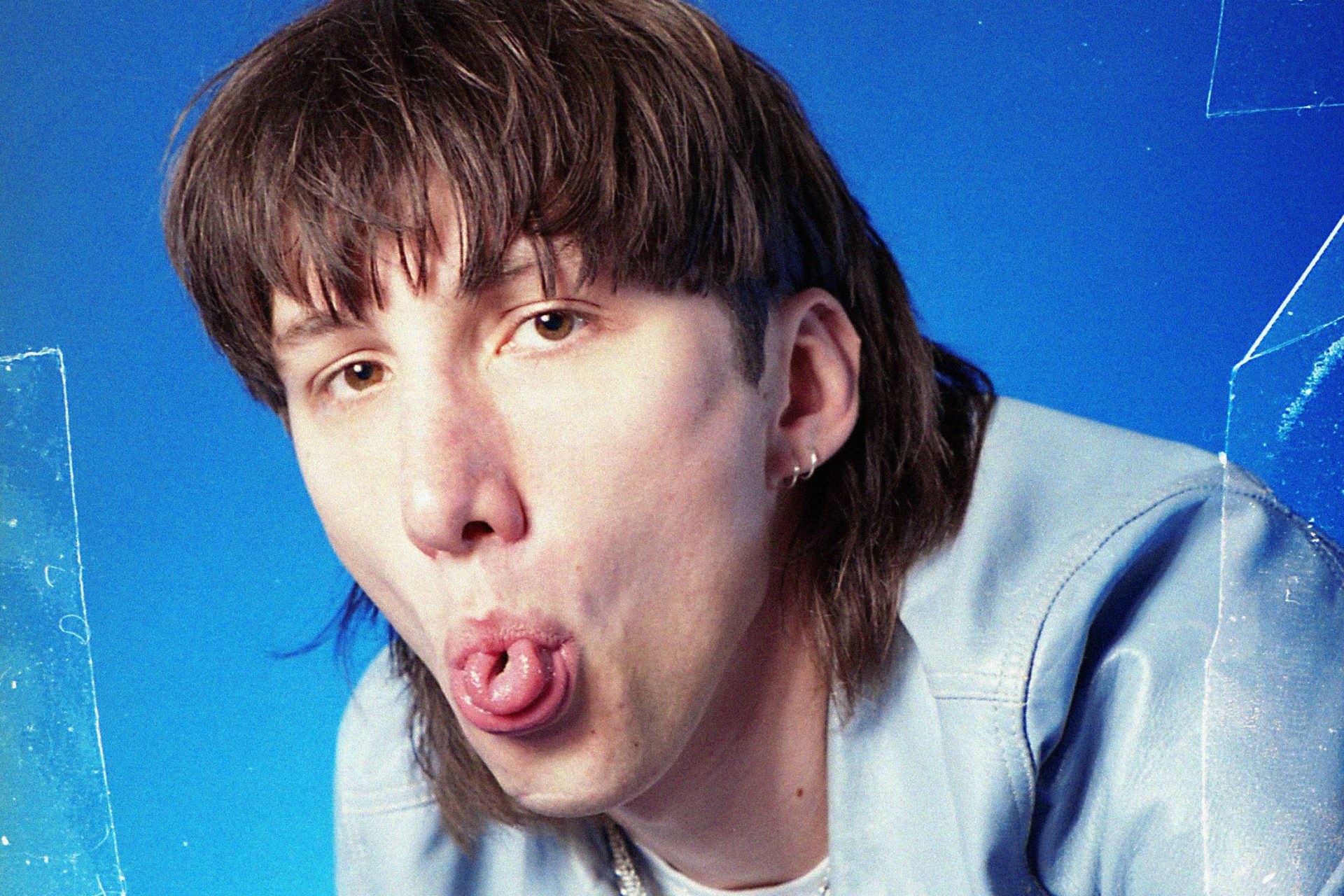 It takes a lot to win the title of ‘Dork fave’, but Joey Maxwell is on his way.

London-based popster Joey Maxwell has moved beyond the genre boundaries of his past musical experiments. His new mixtape ‘Trying Not To Deep It’ features honest declarations alongside dynamic sonic environments, finding him infusing pop beats with jazz instrumentals and R&B supplements. From his flat in London, Joey updates us on his year of reflection and self-growth.

Hey Joey. What have you been up to recently?
I’ve been running loads recently because I’m doing a marathon next month. Up until the last couple of weeks, it was fun, and I was enjoying the mileage, but now, at the business end doing really long runs, to be honest, I’m getting horrible aches – my feet are actually disgusting.

Where did this project come from?
I was in a band called Indigo Husk before this, which made lo-fi garage rock, but a couple of years ago, we sort of hit our peak and were interested in different music and wanting to write other things, so that group had run its course, and so here I am.

Was it a big change going solo?
I only realised how different it was when I released something by myself. It’s way more scary and intimidating because there’s no one else to hide behind, which sounds cliché, but it is true.

Do you like using a full range of media to get your personal message across?
Yeah, I’ve always come up with cool video narratives, but I’ve found with the bigger budget videos that so much of the vibe comes from the camera styles and equipment, so the collaborations I’ve done on those have been a perfect balance of filling in each other’s creative and technical gaps. In the latest video, we had a huge camera rig to imitate Peep Show, which I couldn’t have set up alone.

Does “R&B-tinged indie pop” pinpoint your intended sound?
The mixtape project coming out has such a range of styles that you could use that tag for a couple of the songs, but it would be inappropriate for others. So yeah, I do whatever kind of music I like, and I don’t know how anyone would define that.

Do you think it’s a useful skill to be able to pull from many genres?
Yeah, that’s a product of the single-based world we live in now, but also the way in which people make music now has massively changed. Accessing music is so much easier and bigger, and the fact that you can essentially sit on a computer and make any style of music is a big part of it. I’m a fan of so many genres, and I can go and recreate them and make them my own – that’s why it’s such a big jumble of sounds.

Can you tell us about your new single ‘Infrared’?
The song has no double meaning or anything; I was just falling in love with this girl who is now my girlfriend. It’s a true love song, and what better to have that with than a saxophone – what’s more romantic than a sax breakdown?
I really liked the musician’s style, so I told him to come in the studio and play whatever he wanted. He’s a bit of an overplayer, like most saxophonists are, so he came out with this ridiculous solo. I wanted some real musical elements, which is quite a juxtaposition in the song because it’s quite computer-based throughout the rest of the instrumentation, so the surprise of the obnoxious sax is sick.

What inspired your YouTube series Trying Not To Deep It?
Predominantly the idea came from the fact that while playing shows or festivals, you always meet other bands, and I think the most authentic time you get to know other artists is just hanging around backstage, in the dressing room or whatever, so I’ve missed that collaboration. It’s nice to see some friends, too; me and Finn Askew are label mates, so it’s always fun to hang out with him. I’ve just done an episode with Will Joseph Cook as well; we’re friends too.

Where did that title come from?
Trying Not To Deep It is the name of the series and now also the name of the mixtape; it’s the motto of this whole project so far. This mixtape is partially me sharing my experiences, but doing it in a way that is entertaining because I understand that my role as a musician is to be an “entertainer”. It’s also important to share personal experiences, so the way I like to do that is to keep it enjoyable for myself and not go too deep – enjoying creating art but without worrying too much about the end result or reaction too much.

Lots of the conversation going on in the last year has been very deep!
Yeah, it’s an important thing. Having any platform, big or small, it’s important to be involved with these conversations and social commentary. For me, it’s important to make sure news is spread correctly because misinformation can be very dangerous. I’ve definitely sat back on some things to educate myself better so that I know everything I share is important and correct. It’s important to be plugged in and take these things seriously without trivialising them.

You’ve said you see the rock’n’roll star image as being dated, how can it adapt to the modern era?
I think the traditional image of rock’n’roll is dated because ultimately being a rock star back in the day meant having a total disregard for everything and anyone else; you vandalise hotels, take loads of drugs and don’t care about any of the consequences. That isn’t very cool – when you’re young, you think it’s cool not to give a fuck about anything, but then you grow up and realise that’s the least attractive thing; it’s actually good to do things that you care about. Cancel culture means realistically you couldn’t exactly get away with being Ozzy Osbourne anymore. In terms of someone who embodies the stardom well now, I’d definitely say Harry Styles. He’s socially conscious, charismatic and cool without being a dick; that’s the modern rock star

Do you ever find yourself listening to or creating things that you would’ve dismissed in the past?
I certainly used to listen to very specific genres, but I always had interest beyond that, so it wasn’t such an aggressive change – I wasn’t like, “ugh, pop!” Recently I’ve listened to loads of cool PC Music, like 100 gecs and have been making high fidelity dance music – I wouldn’t believe I’d do that a few years ago. That’s the beauty of being a solo artist and building a reputation of being genre-fluid; if I put that out, people wouldn’t even bat an eyelid.

We heard you struggled to maintain a mullet over lockdown and consider it an art form – what other things in your daily life would you consider an art form?
Breakfast food is definitely an art form – I can do a lot of stuff with baked beans. I’ve really mastered the ways to digest them; I can make that shit gourmet.

What’s your goal with this ‘Trying Not To Deep It’ mixtape release?
The goals have changed from when I made it in 2019; I thought I’d be able to tour it and share it while I’m being exposed to people. I want it now to be a good foundation for when I can do that again; it’s a cool snapshot of me as an artist so people can check out my tunes and become a fan.

What can you tell us about the track ‘fuck’?
It’s another bare romantic little tune. I thought it’d be pretty funny to have a long song with that title but looking back it’s not that funny. The instrumentation is really stripped back, I’m playing guitar on it and it’s nice to take a moment to flex my lyrical bone a bit. Sometimes lyrics and buried in the melodies, but here they’re exposed and I’m focused on being a softy.

What do you want listeners to get from the EP?
It’s up to them, really. I want them to enjoy it and relate to my experiences, my lyrics are quite personable, so I hope there’ll be some eureka moments where people find my words apply to what they’ve got going on. Ultimately I hope to create a common thread between my fans and myself to build a community – I think ‘fan base’ isn’t a great term, I think ‘community’ is better to describe people who have a dialogue with each other, which is what I want to do. P

Taken from the June 2021 edition of Dork, out now.  Joey Maxwell’s mixtape ‘Trying Not To Deep It’ is out soon.