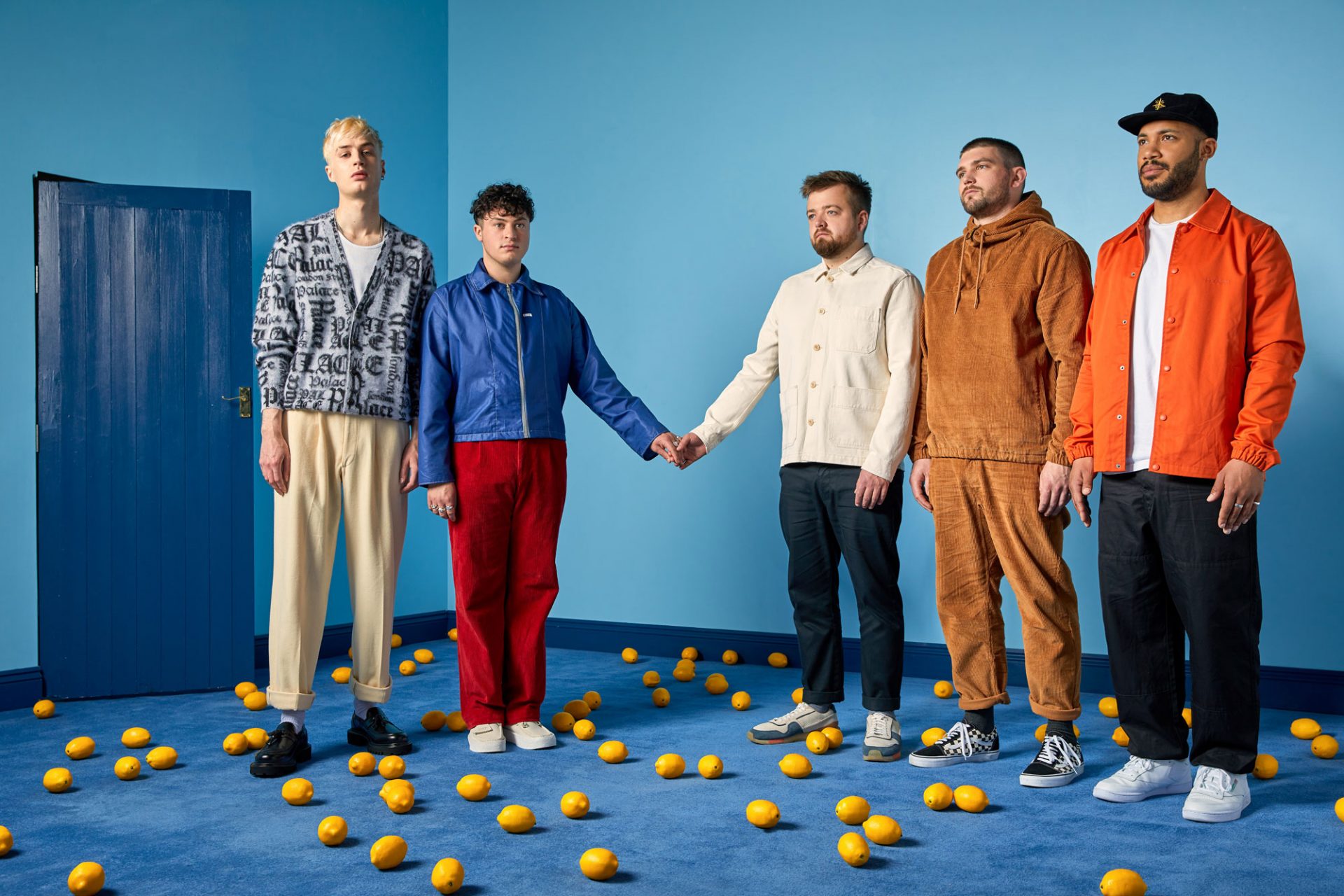 Indie boys KAWALA are all about sunny vibes with their debut mixtape, ‘Paradise Heights’. Time to break out the Factor 30.

Can you hear that? It’s the sound of summer calling, and KAWALA are answering.

No, really. If you want to know what holding a delicious ice cream, sitting in the sun sizzling sounds like, then look no further. Burgeoning London five-piece KAWALA have you covered.

This the story of vocalist Jim Higson and guitarist-vocalist Dan McCarthy growing up together, North Londoners through and through, unaware those salad days would lead to them embark on a journey that’s taken them out into the wide world, going from strength to strength, and even a spot on the FIFA 21 soundtrack.

Flanked by the rest of the band – Dan Lee (guitar), Reeve Coulson (bass), and Ben Batten (drums) – KAWALA are all about seizing the day and not taking life too seriously. Organised via WhatsApp groups, they’ve not long set off on their first UK tour out of lockdown, straight from the boot of their car.

Parked up on a bench in the blistering heat, it’s almost as if they’ve bestowed it upon Dork for our chat. Even if Jim is, erm, in a beanie. And multiple layers. A couple of cold refreshments later (or hot coffee if you’re Jim, apparently), and they’re ready to knuckle down and dig into band life.

Writers of the kind of easy, breezy songs that require listening sunglasses thanks to their embracing, beaming sunlight, KAWALA are here to give this (fingers crossed) open season summer the perfect soundtrack. One ready to be filled with kicking back and relishing in that sweet smell of cut grass, the sound of annoying midges, and more importantly, hope with their mixtape ‘Paradise Heights’.

“Coming up with things like the TV show, suddenly the press want to talk about you”

Certainly not an album, this is bits and bobs that have been kicking around the KAWALA sphere along with some lockdown garden writing. “It felt like a little line in the sand,” Dan explains. “We had this eureka moment where we didn’t realise we had this body of work ready to be released, and it was just there waiting for it. All we had to do was put the pieces of the puzzle together.”

Slotting those final perfectly curved edges into place, it all comes together to make for a rather lovely listen, which, in case you couldn’t tell, is all about sun, fun and chums. Mentioning that they’ve previously been bogged down in wondering if what they’re doing is “cool enough”, this time it’s quite simply all about making “pop-happy music that is summery and fun.”

Indeed, none of this would’ve cropped up had the world kept turning back in 2020. Once things did stutter to a halt, the loss of a packed diary full of gigs, including supporting Bombay Bicycle Club and other dream moments, was, of course, “heartbreaking”. But ever the optimist Dan also notes that when one door closes, another opens. “What it has done is given us the chance to step back and think, what do we want to do? Would we be doing a TV show if we weren’t locked down?”

That’s right; they’ve even been creating their own sitcom. Named after the mixtape, Paradise Heights is a zany peek into the world of these mates and those that orbit, along with a chance to get a peek at their upcoming tunes.

“This whole thing that we’ve created, it’s bigger than a TV show. It’s a concept. It’s a whole world. The whole thing is about wanting people to buy into it,” Dan readily explains. Taking place in a fictional apartment, think Friends with a touch of surrealism for good measure, it’s on a purposeful set constructed for maximum chaos. So, the next step is to wait for the Netflix contract to roll in then? “Oh, yeah. And then we’ll sign our souls to the devil!” Dan affirms with a smirk. “Everyone was always riffing off each other’s weird ideas and funny concepts,” he continues on its origins. “And suddenly we’re in a position where we had come up with the idea of making a kind of sitcom, and the label was happy to facilitate… we’ll probably just get sponsored by Gucci for the next one.”

KAWALA’s exuberant energy is indeed easy to buy into, especially when they go all-in on their ideas. Certainly, the music finds itself residing in a folk core while those summery sounds bloom and blossom from the spring into full-on vibes, but when they’re a band of mates, it’s hard for that energy to not be palpable. Which is good. This is a world that craves more than just some lovely songs. It wants something bigger, something different.

“How do we stand out? Honestly, it’s a constant thought process,” the guitarist explains on their place in the landscape. “We were the first people to go out and do a tour after lockdown one. We are constantly trying to come up with concepts that make our projects a bit different and boost your presence.”

Noting with a snooty air, for flavour: “It’s sad that you can’t just be completely music-focused, like, ‘Oh, we’re such purists’.” Continuing, he says, “You can’t do that. So, coming up with some things like [the] TV show, or going on a park tour, things like that start getting traction, suddenly the press want to talk about you. It’s all part of it, isn’t it? It’s kind of sad… not sad, it’s just part of it. And it’s fun! Because it means we get to make a TV show and go on tours.”

It does seem like KAWALA are ahead of the curve in riding these bubbling waves of attention spans and sugar-rush content. Brightly acknowledging this fact, Jim says: “If you don’t play the game, then you’re just gonna fall behind. It’s not something that we’re scared of because we do enjoy it.” With their TikTok fanbase now eclipsing all other mediums (63,000 for those counting), KAWALA are primed and ready to keep ducking and weaving whatever the world throws up next.

KAWALA’s music certainly lives in its own universe; you can pop a track on and feel like you’re a thousand miles away from any concrete jungle. Truthfully though, they come to life in a live environment. It’s where they flourish amidst their banter, or even wrong-door-situations, such as they had on a visit to Glasgow. During the particularly intense and delicate, harmonising, acapella-featuring moment of ‘Mighty River’, the pair’s faces lighting up at the memory as they explain: “Someone just walked in at the wrong moment, they’d obviously got the wrong room…and just goes ‘Fuck!’”

It’s gems like this that play into KAWALA’s personality. They want to be free and easy, with Dan noting: “We want to it feel like if you’re turning up for one of our shows, you’re gonna get whatever turns up on the day.”

They’re looking forward to the rest of the year finally shifting into gear so they can begin catalysing these moments again. So far, diary entries include kicking off this year’s Latitude’s Main Stage and a tour later on, along with a visit to Kentish Town Forum, which it turns out is equidistant between Jim and Dan’s childhood homes, properly bringing their journey full circle. The year’s looking a bit more positive, and even when the heat’s hiding away in those winter months, KAWALA are promising to bring their brand of sunshine no matter the weather to keep that feeling alive.

So, what does paradise actually look like for KAWALA? For Jim, it’s best found in their song ‘Ticket To Ride’. “It kind of describes what paradise looks like for us because it’s all about travelling to paradise, you know, the sun’s out. Beautiful.”

As for Dan, it’s a little more physical. “Maybe it’s shifted, but paradise is absolutely being onstage somewhere for a silly amount of people and just being with your best buds having the best time in the sunshine.” See you in a field soon then, eh lads?

Taken from the August 2021 edition of Dork, out now. Kawala’s mixtape ‘Paradise Heights’ is out now. Find their TV show on YouTube.