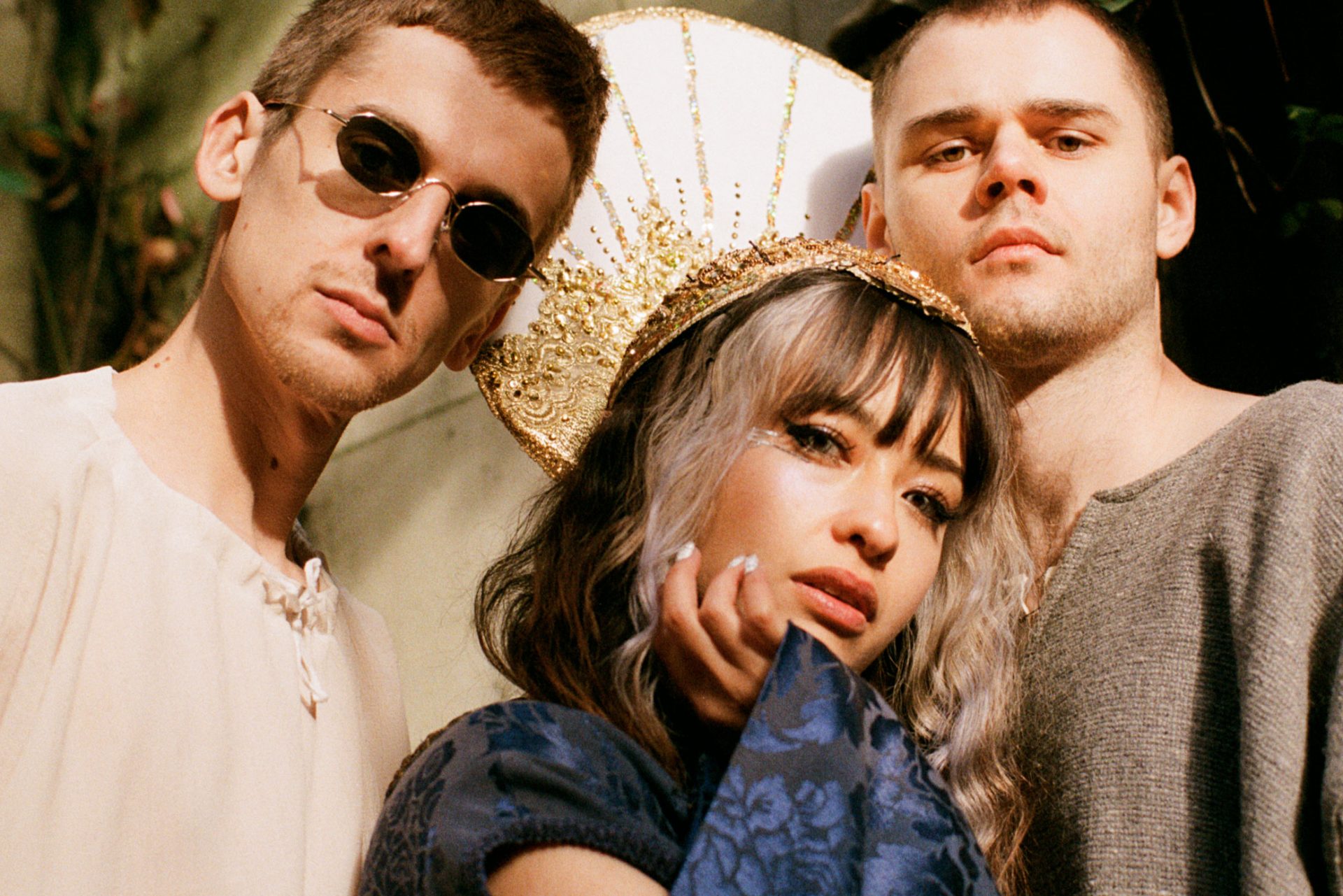 Everything has been ‘a lot’ of late. As Kero Kero Bonito offer up their new EP ‘Civilisation II’, we’re more than up for checking out their alternate-reality.

Kero Kero Bonito are in the midst of a pretty ambitious project: a one-two of EPs – 2019’s ‘Civilisation I’ and this spring’s ‘Civilisation II’ – that see them explore an alternate-reality of their own making. The trio, Sarah Bonito, Gus Lobban and Jamie Bulled, introduce their latest foray into slightly bonkers alt-pop.

Your new EP is fun, continuing your alternate-reality theme – can you tell us a bit about how it develops that concept?

Gus: The “alternate reality” aspect of ‘Civilisation’ relates to Svetlana Boym’s theory of off-modernism, which posits that if we retrace our cultural history and find avenues that were possible or suggested, but never truly investigated, we can create parallel timelines of cultural development by exploring them now. We implemented the concept on ‘Civilisation’ by attempting to make fantastical, progressive modern pop music using only old hardware synths; the result is something feasible decades ago, but realised for the first time today. It’s an interesting concept because it interrogates our assumptions about history, creativity and cultural values.

Where do you draw inspiration from when it comes to storytelling? Are you into books, TV, film? Do you consume a lot of fiction?

Gus: I try to keep my antennae switched onto whatever media I come across, though video games (especially the ones I grew up with and internalised) definitely have to be included, and I own way, way more music than anything else. I probably read more non-fiction actually; fiction is great obviously but learning unfamiliar raw concepts is like finding new tools to make stuff with.

Jamie: I’m a big fan of Douglas Coupland, and over the years, I have realised that our work shares a lot of similar elements, ie mundanity vs world-defining events.

How do you approach turning your story ideas into song, is the process similar to when you’re writing about other themes, or an entirely different beast?

Gus: It’s not entirely different, but it is a distinct genre and possibly the hardest to pull off. Cool-sounding platitudes relevant to a specific theme (or not!) work well for most songs, but narrative songs have to be very tightly wound to communicate a story without compromising the music itself. For example, you’ll probably need to describe a series of events to move the plot along without the language becoming boring, all while maintaining metre and performability. This makes fitting a story into a song really difficult. A successful narrative song, as with so many things, should feel natural enough that you can’t hear the work that went into crafting it.

Are there parallels between the narratives going on here and what’s going on in your own life?

Gus: The songs on ‘Civilisation’ lie on a spectrum encompassing our real, even mundane everyday lives and an existential, mystical framing of those experiences. ‘When the Fires Come’ recounts the wildfires we literally witnessed in the USA in 2018, but also places that within the context of the climate change society faces as a whole. The idea is to break down and copy the methods of historical cultural artefacts so we can express ourselves in the same paradigm, staking our place within the history of civilisation.

“It interrogates our assumptions about history, creativity and cultural values”

It feels a bit like we’ve been living in an alternate reality over the past year doesn’t it, how have all the pandemic restrictions impacted you guys?

Gus: Boringly in that we could no longer record together and had to work from separate recording setups, and that it made concentrating extremely difficult. There was an interesting moment at the very start of lockdown where the enforced return to DIY invention opened the floor up to any ridiculous, interesting ideas people could come up with. That was really exciting, and I felt it putting KKB’s SPF420 live stream set together. I think that’s long since dissipated now though, and that instead, we’re all trying to jump back on the culture train where we left off in the hope that it’ll be moving again by the time we’re ready for action.

Jamie: I’m starting to feel that pre-2020 was the ‘alternate reality’. Regarding the restrictions, I really miss bouncing off each other in a room.

Sarah: My perception of time has changed. It feels like we are living in double time, and it’s been strange not seeing Gus and Jamie.

If you could go live in an alternate reality of your own design, what would it be like?

Gus: In my alternate reality, all pop music is as close to original expression as possible, and that aspect is appreciated on a mass mainstream scale.

Sarah: I want humans to have wings and animals to talk.

Are there any other artists working on similarly high-concept ideas that you’re particularly into at the moment?

Gus: If we’re talking concepts specifically, I think Yves Tumor occupies a really interesting space that no-one else is exploring. Their last record updated the lineage of Black crossover artists like Jimi Hendrix, George Clinton and Prince, but in a way that feels more vital than almost anything else I can think of, without compromising the considerable musicianship required to make those records.

What else are you working on at the moment? What’s your next project?

Gus: We’re doing a few fun bits and pieces that should appear soon. We have to preserve some surprise for our next album, but you won’t be waiting another two years for it.

Do you have any predictions for later this year?

Gus: I predict that people will continue to make hopelessly inaccurate predictions.

Sarah: My wisdom teeth will finally finish growing and not hurt anymore. P

Taken from the May 2021 edition of Dork, out now. Kero Kero Bonito’s EP ‘Civilisation II’ is out 21st April.