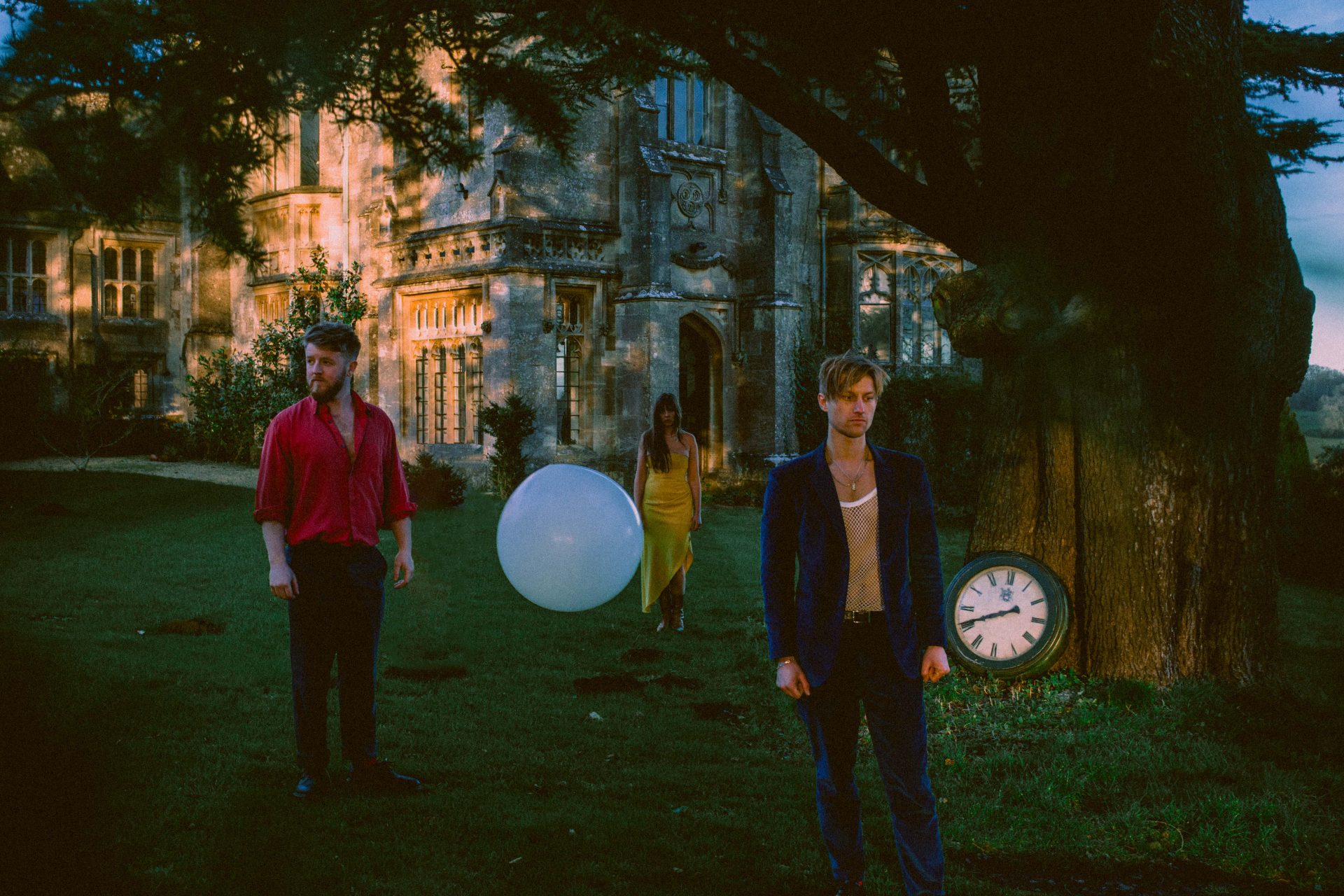 Having already picked up comparisons to Wolf Alice and Sunflower Bean, London three-piece KHARTOUM guarantee a nice time with their warm guitar-pop tunes. With their second EP ‘Some Days’ fast approaching – written and recorded at their self-built studio – they’re stepping up and into a mould all of their own.

Hi Jake! It’s weird that we’re already halfway through the year isn’t it, how have you found 2022 so far?
It’s going quickly, definitely much quicker than the last couple of years has gone. This year has been excellent so far: we’ve managed to write and record our second EP and get most of it out there with our label Young Poet with some great support along the way. We’ve got exciting plans for the rest of the year; I think 2022 is going to be a tasty one.

Tell us about your band then – who are you all, and what are your roles within the group?
We’re named after the Racehorse in The Godfather… the one that meets an unfortunate end. Hopefully, things work out a bit better for the band. I’m Jake, the bass player and unofficial tour manager (meaning I can be more relied upon than the others not to miss our train, plane, automobile). Cam is the guitarist, lead singer and producer and pretty much single-handedly built our studio in the depths of Devon where we recorded this EP (who knew floating drum floors could be so interesting), and Scarlett is the drummer extraordinaire.

When did you all meet? Who’s idea was it to start making music together?
Cam and I met at Uni, where we both studied music; we lived together there and were always playing our guitars and messing about musically. We bonded over a mutual respect for Josh Homme. We met Scarlett later down the line at a party in a field somewhere, and she felt like the right person to complete the missing piece of the band’s puzzle.

How long did it take you to find your sound?
We’re always developing our sound, but getting where we are now stylistically has evolved over the last 12 months, having spent time dug in at our own studio with fewer distractions and more space to try things out and really put the needle on the records we want to be making. We all like different music and have a vast range of influences, so the process of working those influences together to create our sound has been a really fulfilling process for the three of us.

What do you most enjoy writing songs about, are there any topics you’re particularly drawn to?
A lot of our writing comes from personal experiences. I’ve found there’s no better way to process an experience than writing a song about it, and like a lot of people, the last 24 months have thrown up a lot of things that you want to get out there in some shape or form… when you write something, you’re always excited about the next thing as writing and releasing is a form of therapy. In our heads, we’re already on the next EP and ready to exercise some demons.

How did you pull together your new EP, ‘Some Days’? What was your starting point, and how did you approach curating the track-listing?
Following our previous EP ‘Vultures’, this was just naturally the next step, I guess. By this point, we’d all had a good influence on each other’s process and the kind of sound we wanted to pursue. Generally, we start with a lot of ideas, and those ideas get shaped and moulded into the songs that end up on the record… a chorus idea might end up as a middle 8, and seemingly incidental moments might end up as a key hook. We fine-tune things and then share it with the likes of George Murphy and Eduardo De La Paz (who’s got a rather nice Grammy perched on his studio shelf).

How did building your own studio come about?
Cam moved out of London last year and converted an old milking shed into what we now call our studio. Cam nailed it with YouTube tutorials, and before we knew it, we had a fully functioning studio, complete with the aforementioned floating floors and soundproofing… although I don’t think the cows would mind the odd rumbling bass-line.

Was building a studio difficult? What were the logistics like?
Both Cam and I have worked in the trades so I like to think we’re pretty handy with a nail gun. Essentially the studio was coming together at the same time as recording the EP, so it became about finishing the drum room to record the drums, and then next week finishing the vocal booth to record the vocals. It was full-on, but I think the end result is a justified reflection of all the blood, sweat and tears.

What are you working on at the moment?
More tunes to release soon! We want to get more than just this EP out this year, so we will be spending plenty of time in the studio and already have a couple of songs in the works, which we are really excited about. They are coming thick and fast, which is nice. It’s a great space for rehearsals, too, so we’ll be doing that too in preparations for the shows in the pipeline.

Do you have a busy summer ahead?
Plenty going on, so much. Not too much, though. Never enough. We’ll be returning to Glastonbury after the long Covid break and will be announcing some more festivals and shows very soon.

Is there anything else we should know?
If you listen really carefully, you can check out one of our tunes in the current season 3 of The Servant on Apple TV. ■

Taken from the July 2022 edition of Dork, out now. KHARTOUM’s EP ‘Some Days’ is out now.