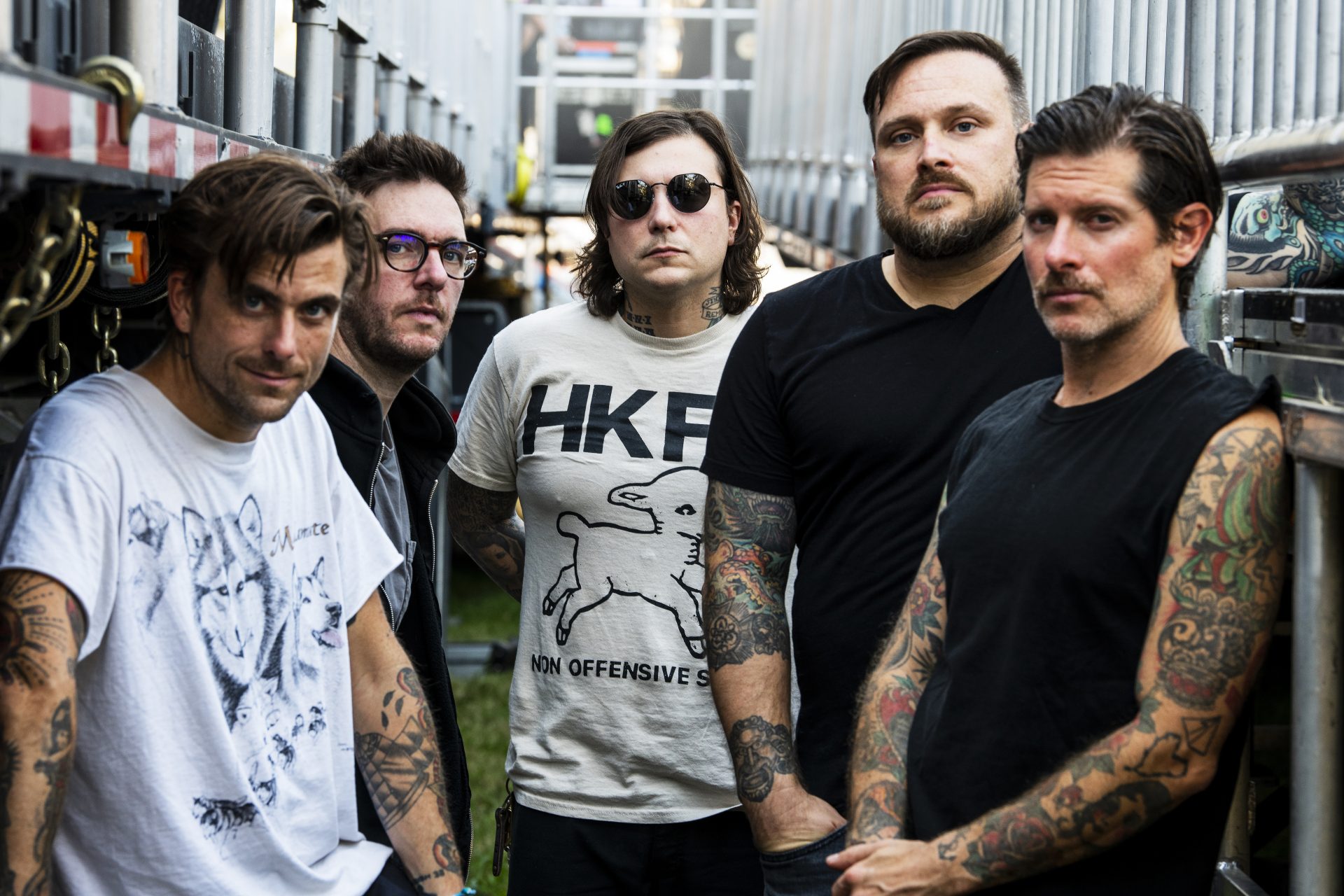 Featuring some of rock’s most well-loved faces, L.S. Dunes have taken 2022 by storm – just don’t call them a supergroup.

Trying to get your mates together is hard enough at the best of times, but what about when you’re all in busy bands? Well, L.S. Dunes managed to make it work, with its five pieces all coming together to create a barnstorming mix of emo, post-rock, and hardcore.

“You don’t find the connection that we have very often,” says Anthony. “It’s rare. So to have it with these guys, and to have it with this band is such a gift.” It certainly seems as if there’s something in the water amongst these five chaps. Or as Tucker quips, “Some people’s grandma just know how to make sauce; they don’t have to measure anything. They just throw it in…so we are the grandmas of our craft!” Tasty.

It’s such a joining of forces, in fact – a Power Rangers morphin’ time situation if you will – that even when telling people, they didn’t believe it. “I told some guys about it that thought I was lying,” Anthony grins. “And I was like, no, I’m in a band with them now! And they were like, ‘No, you’re not…’. And then a year later, we announced that we were a band and I was like, see, I told you!”

Not turning up empty-handed, their debut outing – ‘Past Lives’ – found itself being created during the various lockdowns. A pandemic reaction born out of backstage promises in passing between its members over the years, in 2020 emails were finally sent, and text groups were alight.

“When Dunes started, it was at the height of it,” starts Frank. “And you had five individuals who all they ever knew was playing music for live audiences. All of a sudden, that gets snatched from you, and you don’t know what to do anymore. The only thing you’ve ever known is gone. So for me, L.S. Dunes has always represented a lifeline. A new lease on life and a new opportunity to figure out how to do the thing you love in a new and exciting way.”

The first time the gang was able to get together in person was at Frank’s house. But hanging over the group was a sneaking subconscious; “What if this doesn’t work? What if playing the songs together sucks? What if the feeling isn’t there?” As Tucker recalls, “But I think that we just trusted in one another, and then everything just clicked into place for everybody.”

Their first actual IRL performance together was for the video for single ‘Bombsquad’. “I couldn’t stop smiling the whole time that we were hanging out,” Anthony casts back. “I felt like a little kid. I felt so lucky to be in a band with these guys who were able to joke around but also able to get serious and talk about a song in a way that was respectful and loving to everybody.” For a band steeped in emo prestige, it’s only fitting too that their debut public outing came last month at emo-nostalgia festival When We Were Young in Las Vegas

Of course, when you’re dealing with such high stakes – after all, between them, they have a musical reputation most bands could only dream of – it means things have to be kept hush-hush until ready. Anthony found this to be quite the challenge. “I had a hard time not just posting and sharing the first demo,” he laughs. “Like, I wanted to tell everybody right away, and I’ve always had a difficult time with that, [but] it needed to be a thing that was more strategic.”

Tucker adds his perspective, “It’s insane because this writing process, and this whole thing has been such a huge part of all of our lives, literally for me besides the birth of my daughter and any of that stuff, this is the thing that I’m most proud of and to not be able to talk about it was gut-wrenching.”

Once word got out about L.S. Dunes, a certain S-word began being bandied about by the press and fans, allowing another reckoning to set in. “It’s nerve-racking because people throw around that ‘supergroup’ term, so people have an expectation that the record is going to be a certain way,” admits Tucker. “And I know that we love it the way that it is, so I think there’s a level of excitement to show people what we’ve been doing because it was such an important thing in our lives.” And on that supergroup term, Frank smirkingly adds, “I don’t really think much of that word. It’s kinda silly really. I’d prefer super-handsome group or soup-or-salad group.”

It’s evident that ‘Past Lives’ means a lot to its creators. Mostly because it was a chance for each member to reignite that feeling of first stepping into a room with a bunch of your friends and stabbing at instruments until you made a unifying sound – even if it was created “in the cloud” as Tucker puts it. “We joke that the L.S. in L.S. Dunes stands for Low Stress because that’s literally how we wanted to have it,” he explains. “The mantra for this band is like if you’re gonna get stressed, let’s shelve this idea. Let’s make this a place to be talking purely creatively.”

Given each member is at a stage in their respective careers where they’ve been around the block a few times, it also gave them a chance to peek behind the curtain of each other’s processes. “It’s like sitting in your living room,” Tucker reasons. “You would never think you would be able to have two living rooms,like everything is just where you want it to be, everything feels natural. And it’s fun learning about everybody else’s process in their bands too.

“I think the surprising part is we’re all cheerleaders of each other’s bands and each other’s careers. It’s interesting to hear all the stories you know about our projects.”

Anthony adds, “Something that I think we’ve all learned is that if you keep the vibe respectful and loving, and make sure that the friendships that everybody has are intact, then everything else will fall into place. So we can be good friends to each other, hold space for each other and be respectful of one another in that way, then all the musical stuff is just going to benefit.”

And in case you couldn’t tell, the love in L.S. Dunes is palpable. “Me and a couple of the Thursday boys went out to see Anthony play, and I’m sitting there watching like, ‘Oh my god damn, that’s my fucking singer. He’s so fucking handsome. And he’s so good’,” Tucker beams. Returning the compliment, Anthony adds, “I was watching Thursday play the exact same place the night before, and I was having the exact same thought just watching Tucker thinking, damn, I get to be in this band. I get to be in a band with this guy.”

What the future holds for L.S. Dunes is anyone’s guess. The pandemic pause allowed its members to seize the day and create this swirling mass of their individual components. “Not to sound cheesy, but it’s time for us to let these songs take us where we’re supposed to go,” reckons Tucker. “People always ask, is this a full-time thing? And it’s like yes, and I think that we’re just gonna follow these songs where they take us.”

“Originally, its purpose was to keep us creative and out of a depressed state of not being able to do what we loved,” says Frank on Dunes’ initial intentions. “And now it’s taken on a new life; it’s alive now. And only growing. I’m curious what the future holds, and incredibly excited to actually be in this band that was never meant to be – playing these songs live for people…songs that were written in uncertainty and collective solitude.”

And it would seem ‘Past Lives’ is already paying dividends. “The other day I have I was somewhere I was walking and I heard somebody go, that’s the guy in L.S. Dunes, and I was like, ‘Shit, I’m the guy from L.S. Dunes’,” Anthony cackles.

The reaction to the band has even surprised Frank, who admits, “You never know what to expect when you put new art out into the world. Are people going to get it? Are they going to like it? Will they care at all? That would be the worst, to be met with indifference. But the response has been overwhelming so far, and they haven’t even heard the whole record yet! It’s very exciting. I really think it’s a fantastic record. I’m excited for people to live with it for a minute.”

Circling back to that supergroup tag being pasted over everything they appear near, Tucker chortles, before summing up L.S. Dunes nicely. “The only thing super about it is the fact that we talked about it and made it happen! There are so many times that I would hang out with Anthony in passing and be like, ‘Yo, we should do something together’, and it just never comes to fruition because everybody’s busy… but this is the project that happened. This is the project that’s happening.” ■