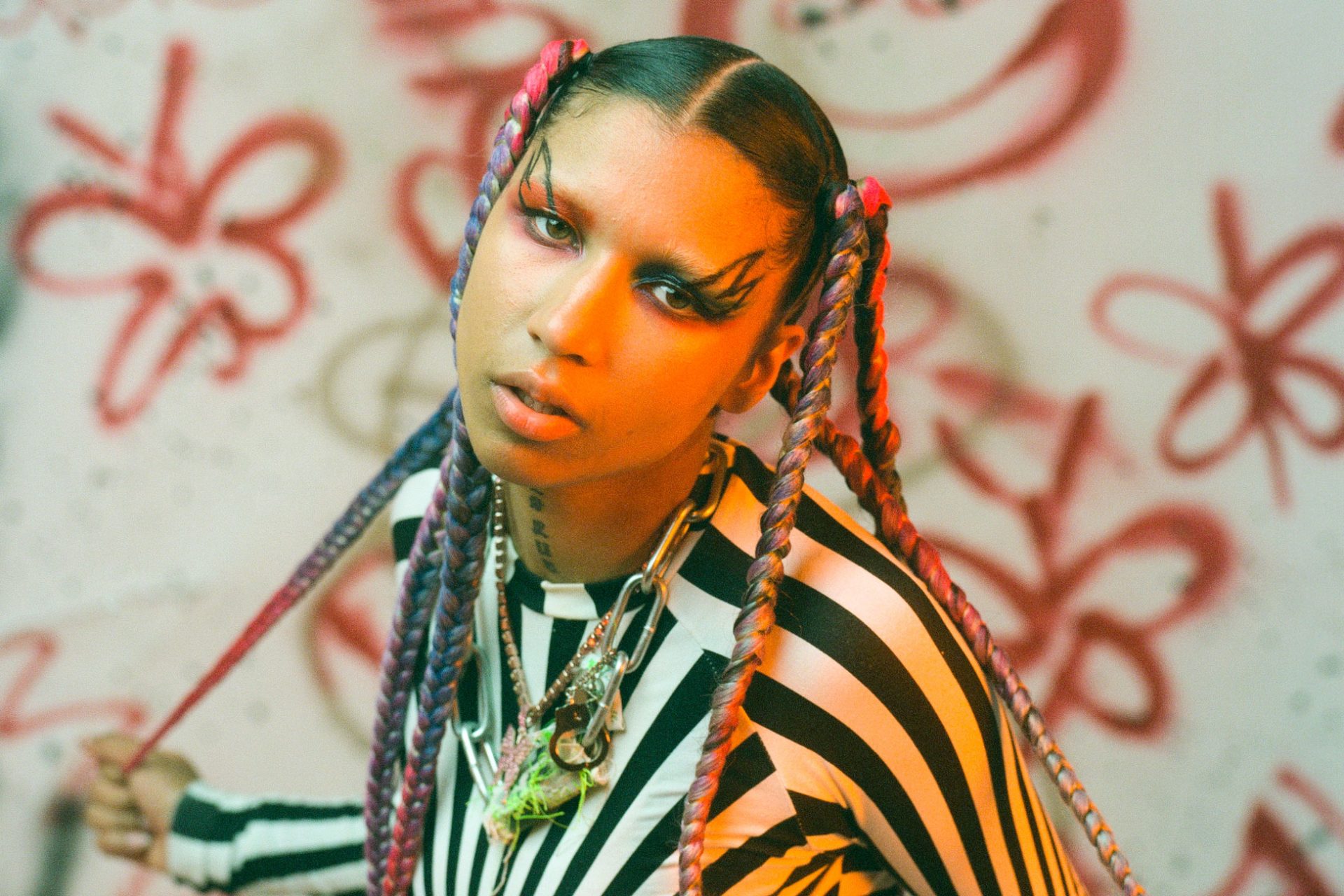 When it comes to exciting new talents, few come close to Lava La Rue. Part of the fast rising NiNE8 collective, her recent EP ‘Butter-Fly’ blazed a trail that’s worth getting in a bit of a flap over.

Hope lies in communities, and Lava La Rue is a living example that you can build and stand your musical ground on shared creative soil. They’ve been on the way to shake things up since childhood when writing songs as a kid brought up by Jamaican grandma and, later on, as a young teenager in foster care. Early on, Ava Laurel (Lava is a stage anagram) has decided to push past lack of connections and an underprivileged position in the art world, driven by an earth-shattering determination and cultural affairs played out on Ladbroke Grove.

“As some people know, West London is a very diverse area, and there’s a lot of different communities of people. A lot of subcultures, a lot of Rastafarians, punks and there are fusions. When you grew up around that, that comes into your work,” says 22-year-old Lava.

Not wasting a drop of that exalting essence, they’ve smartly used it all up to elevate their persona. Making a critically-acclaimed debut with ‘Stitches’, a hip-hop mixtape with R&B infusions, Lava set themselves up for inevitable success. After all, like a modern-age renaissance visionary, they do it all. From co-founding one of London’s coolest collectives in NiNE8 (home to some of the hottest names on the scene like Biig Piig), LGBTQ+ and Black Lives Matter activism, creating visual art and flashy garms, to only recently putting out new EP ‘Butter-Fly’, they make sure we’re always gonna get a whole package; one that’s overflowing with eclectic influences from Prince and Grace Jones to Tame Impala.

“The first-ever album I bought as a kid was Gorillaz’ debut,” Lava shares.

Just like Gorillaz, they pickpocket bits and bobs of diverse sounds and images to incorporate them into the Lavaland’s landscape. That’s what they’ve done in a video for ‘Magpie’ that represents the timeline of London’s alternative cultural history and is a moving call for unity and action in tribute to the past.

“It made a lot of sense for it to be placed in an underground train because it’s all about underground movements. It specifically focused on the Caribbean culture that came to the UK and black parts like rhyme and different music that started from these communities, and how that would affect the rest of the contemporary music industry. Both in Britain and the rest of the world,” Lava elaborates.

Appreciating that musical heritage, their exploration won’t stop there. Lava finds a comfort zone in a state of flux, constantly searching and taking in stuff needed at a current moment. That’s why they struggle when trying to define their sound. “It’s funny. I feel like I could have a long answer, but I just make the music based on how I’m feeling and my moods. I suppose, recently, I have been feeling more of a psychedelic sort of vibe, just because that’s mentally where I am at in my head.”

Newly released EP ‘Butter-Fly’ mirrors that headspace with its sun-drenched psych-rap and raw, heart-on-sleeve lyrics. It’s Lava’s best record yet. “I definitely wanted to push myself as an artist in terms of my songwriting, my lyrics and my singing. I feel like my first goal every time I was in the studio was to make something that sounded even better than the last song I made. I think that was a part of it, and I just wanted to create the feeling or the mood of a very transitional time in my life, whether that was about love or my area. That’s why it was called ‘Butter-Fly’, because it’s all about growing and transitioning.” Though while listening to tracks like ‘Goofy Hearts Club’ or ‘G.O.Y.D.’ (a collaboration with Clairo and response to her ‘B.O.Y.D.’), you can’t miss the EP’s recurring motif: love.

As a non-binary person, Lava has opened up like never before and contributed to the terribly under-represented, across all genres and decades, theme of queer relationships and dating. Always coming from a place of honesty about their experiences and sexual orientation to avoid complication down the line, and simply because they want to keep it real 100% of the time, Lava also recognises that everybody deserves their own process of coming to terms with who they are.

“You can still have your own individuality without doing everything alone”

“If an artist is secretly queer or gay and they get really, really big in their career, and then they come out as gay, it’s so much more controversial and a big deal than if you just start from the beginning being like, ‘this is me, take it or leave it’. Obviously, everyone has their reasons for it, for sure, but I mostly did it for my own sanity because I want to be able to talk about who I am. If you start off saying that, then the right kind of people will be drawn to you.”

Fashion is an important part of Lava’s stage image and constructing an everyday identity that echoes in their music; it goes well beyond playing with extravagant looks (they’ve got that nailed, though) or letting the inner weirdo loose. “It’s really funny because sometimes I’ll see maybe on TikTok, people being like, ‘Oh this is a new fashion choice, we’ll put our chain on a belt or whatever’. But in lesbian culture, if you wear your keys on the loop of your, belt that’s like a signal to show that you’re gay to other people. Just in case if you’re in a place where you can’t talk about it. This is just an example of how fashion for certain communities was almost like a uniform, so if there were other people who are like you, you could see that.”

There is power and freedom in belonging to a community, especially if mainstream society forces you into performing the role of an outcast. Lava, well aware of this strange magic and its flourishing properties, uses it to its fullest, whether it’s a collaboration with similar-minded musicians like Deb Never on ‘Angel’, an outstanding queer love story fuelled on 80s acid rock and raw emotions, or just jamming with mates.

“I find that you have more fun when you are achieving your goals with people that you care about. There’s something about it that I think is more fulfilling. I can appreciate and respect people who wanna do it themselves and are the lone wolf, but I believe you can still have your own individuality without doing everything alone. You can be individual and still care about the people around you and want them to be equally successful and collaborate. It’s more wholesome,” they share.

Longing for that kind of wholesomeness has built bases for what has started out as a bunch of school friends chilling and partying together and quickly evolved into a DIY collective and a creative network, NiNE8. “[That] all came from positivity because I feel like there can be a lot of negativity or elitism with some artists when things come to, I don’t know, being performative or whatever. We weren’t really caring about that. We just wanted to make good music with good people.”

A few years passed, and teenagers grew up into artists in their near-mid 20s with an impressive repertoire that gained recognition in the UK’s alternative scene, made charts and stole hearts of devoted followers who found role models and representation in this extraordinary crew of once social outcasts. “It’s really cool. It’s surreal. Even over the past two years, I’ve had people messaging me, or messaging NiNE8, saying how much the music has really helped them navigate their own identity. I remember when I was younger, and I would send those messages to the people I admired. I remember when I was 16, and I discovered the rapper Noname, and I remember trying to message her. I’m sure she never saw my message being like, ‘Your music changed my life; I love you so much’. It’s weird having the roles kind of reversed and have people do that with me,” shares still-astonished Lava.

Both NiNE8 and Lava La Rue’s prolific engines have been working like crazy over the lockdown period, perfecting and putting out new exciting projects. Though fresh from giving the world their last musical lovechild ‘Butter-Fly’, and enjoying the buzz and applause it’s received so far, Lava won’t rest on the laurels. They’re already planning on releasing remixes, marketing visuals for tracks of the EP and, obviously, constantly writing more music. Enthusiastic about the mad amount of support they’ve received over last year, Lava is too humble to take it for granted until seeing it with their own eyes. Preferably at a gig. “Right now we’re seeing a lot of love, but it’s all online, so it doesn’t really feel real.”

While waiting for the 2021 version of Summer of Love, fingers crossed, this June, Lava invites us to take a peek at their vision of the future. They want to facilitate more in real-life spaces, creating pop-ups and community-driven spots in West London where people can get merch and socialise. The main mission, though, remains unchanged: to continue to make music, videos and go on tours on a bigger scale. Bloomed on the rebellious grounds of Ladbroke Grove, the same ones that sheltered 1960s counterculture and saw the birth of The Clash, Lava’s ambition has always been bigger than their surroundings. “I really feel like I’ve only just begun, and I still feel like I’ll very much be on that journey in five years too,” they admit.

It’s only a matter of time before our favourite playlists will be flooded with Lava La Rue’s burning-hot and hazy musical mixture that we would indulge in every restless night. “Like a fever dream,” Lava defines it at last.