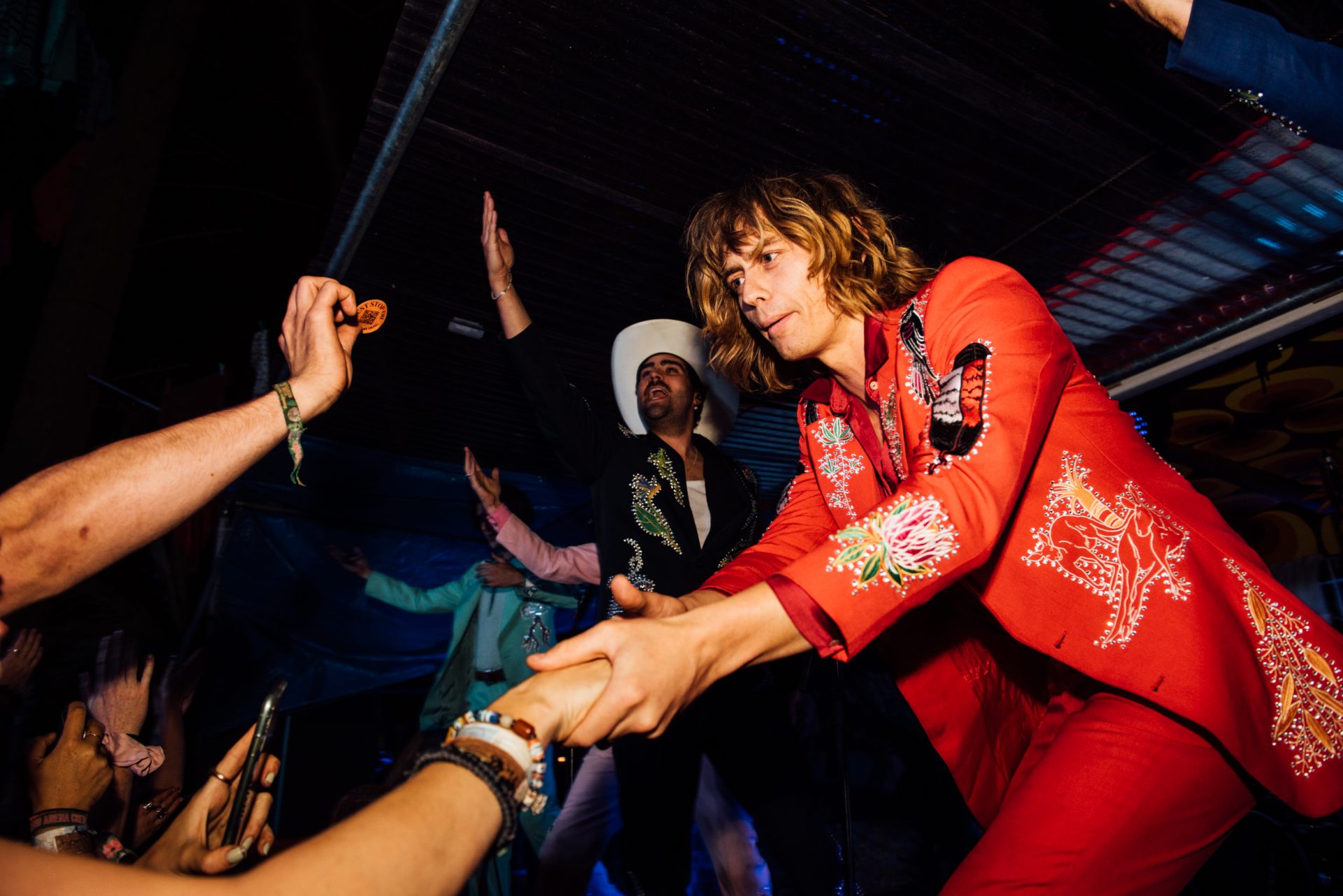 Aussie multi-instrumentals Lime Cordiale, led by Oli and Louis Leimbach, have been holed up down under while their second studio album caused a riot during lockdown. Having recently dropped an extended collaboration with none other than Idris Elba, the group are now back spreading their nonsense all over the globe with new tunes already on their way.

Two summers away from the UK and an all-out denial of adrenaline has had its effect on the brothers – “Who am I? What am I doing? I have no meaning in life!” – but the release of their second album, ’14 Steps To A Better You’, during this time helped to keep their extensive fanbase sane… not to mention it was an unforeseen success for the band too. “Everyone freaked out and thought, ‘oh no, we can’t release stuff with all this going on’, so we had a free run at it,” Oli grins. “We thought, ‘fuck it, we’re not holding onto this for another year or two’, however long it was going to be. Everyone in Australia got money from the government to spend on our merch, so it was a winner!”

Having bolstered their discography with a record that pushed their weird and wacky appeal one step further along a gleeful track, they began looking for a creative partner to bounce ideas off for their next single, ‘Apple Crumble’. “We were looking for a collaborator, someone that could offer something different,” he continues. “We looked all around the world for something a bit quirky – we didn’t want to default to the closest Australian act we could find; it’d be too obvious. Idris just happened to be in town, and once he knew we were looking, he volunteered immediately.”

The track was a success and soon evolved into something larger in scale; the ‘Cordi Elba’ EP dropped at the start of 2022, featuring the English actor and musician on all six tracks. Beyond his Hollywood fame, it became obvious that music was a true passion for Idris. “We were ready to leave after the single, and he started throwing more ideas at us. He was so enthusiastic; he must have enjoyed making music more than whatever he was filming,” Oli laughs. “Take that, anonymous director,” Louis chips in.

Team Leimbach used this as an excuse to expand their identity beyond the core indie roots, and their live show now boasts dance moments, a fun pop sensibility and rock star crowd interactions. “Louis always wanted to do a hip-hop EP, but we didn’t know how to make that transition as an indie band,” Oli shares. “‘Cordi Elba’ gave us permission to make that move. Now we’ve opened up that territory, people will be ready to observe us moving away from just guitar and drums.”

Lime Cordiale haven’t always held the confidence to make such bold moves, as they originally struggled to find a sonic that would work for them. “we had a period of writing songs that we thought radio might like but as soon as we stopped doing that, we started getting bigger as a band – and then radio actually did play us. When you start trying to force a hit, it becomes really boring. We don’t worry about finding a sound; just write a song, produce it how you want it to be and then it’ll end up fitting what you wanted anyway.”

“I’m surprised at how many bands go into it and have a sound straight away,” Louis admits. “That always impresses me because we really did struggle for a while. Now we know that the more stupid our music is, the more fun it is. Everything we’ve been writing at the moment has this weird country twang to it; I don’t know where that came from.”

The pair’s latest work definitely leans into this style; ‘Country Club’ is an upbeat tune that leers at those who have never experienced misfortune. On the chorus line – “in the real world, a life of leisure really has its limits” – Louis explains that they “were imagining the downfall of this upper-class person. They’re living it up, everything’s going super well for them, and then they get cancelled or fired, and everyone suddenly hates them, and they don’t know how to deal with being at the bottom of the food chain. We’re laughing at them being sucked into what most of the world experiences.”

“It’s about the upper class, being naïve about your privilege – a lot of us are privileged, but, in that position, there’s a certain amount of responsibility you have to carry,” Oli reflects. “Especially in England, there’s this entire upper class that have no idea what’s really going on in the world around them.”

This sharp and timely tune is a summery bop, weighing the serious-but-silly narrative against groovy beats and upbeat melodies. Fortunately for all, this second single (following on from May’s equally delightful ‘Facts Of Life’) is not just a standalone experience but is teeing up an upcoming, if not immediate, third full-length.

“These are the first two singles off our next album,” Oli announces, before bracing us with: “It’s not completely finished, we’re still working out the last little bits, but it’ll be out next year after a few more singles. It’s been hard to find time to finish that up now we’re back on the road, but we’re getting closer.”

Speaking of being back on the road, the Leimbach brothers and their three instrumental companions are once again taking every opportunity they can to get on stage, a claim proven by their two performances at Latitude, the latter of which saw them mount a trailer for a midnight showing.

“At the start of the band, we said yes to every gig; it didn’t matter how many people would be there,” Oli enthuses. “It might pay 100 bucks and get a crowd of five people; we’d take it.” (“That was the first 500 shows,” Louis interjects.) “We’re back to that now – the saying yes to everything part, I mean.”

The band have travelled from Australia to two shows in Amsterdam, two more in Germany, one in Ireland, another in Poland, two weeks in the US, then a London show before their appearance at Latitude. “It’s been a weird route because everything’s been rescheduled, but we’re trying to make up for lost time,” Oli explains. “You take what you can get in terms of venues being open.”

Lime Cordiale obviously have an immense following at home, but they confirm that their trips to the UK are often the most energising. Oli clarifies the key difference: “English audiences are wild; they love to drink and sing. Australians are wild, too, but they often run the risk of getting too loose – they don’t know how to hold their alcohol. If you play too late, everyone’s gone.”

“Every British show seems to be full of football fans,” Louis observes. “Between songs, all you hear are chants. We need all those troopers to come out for us.” As their dual showing amongst Suffolk’s finest evidences, these Aussie icons will always have a place on the English live circuit.