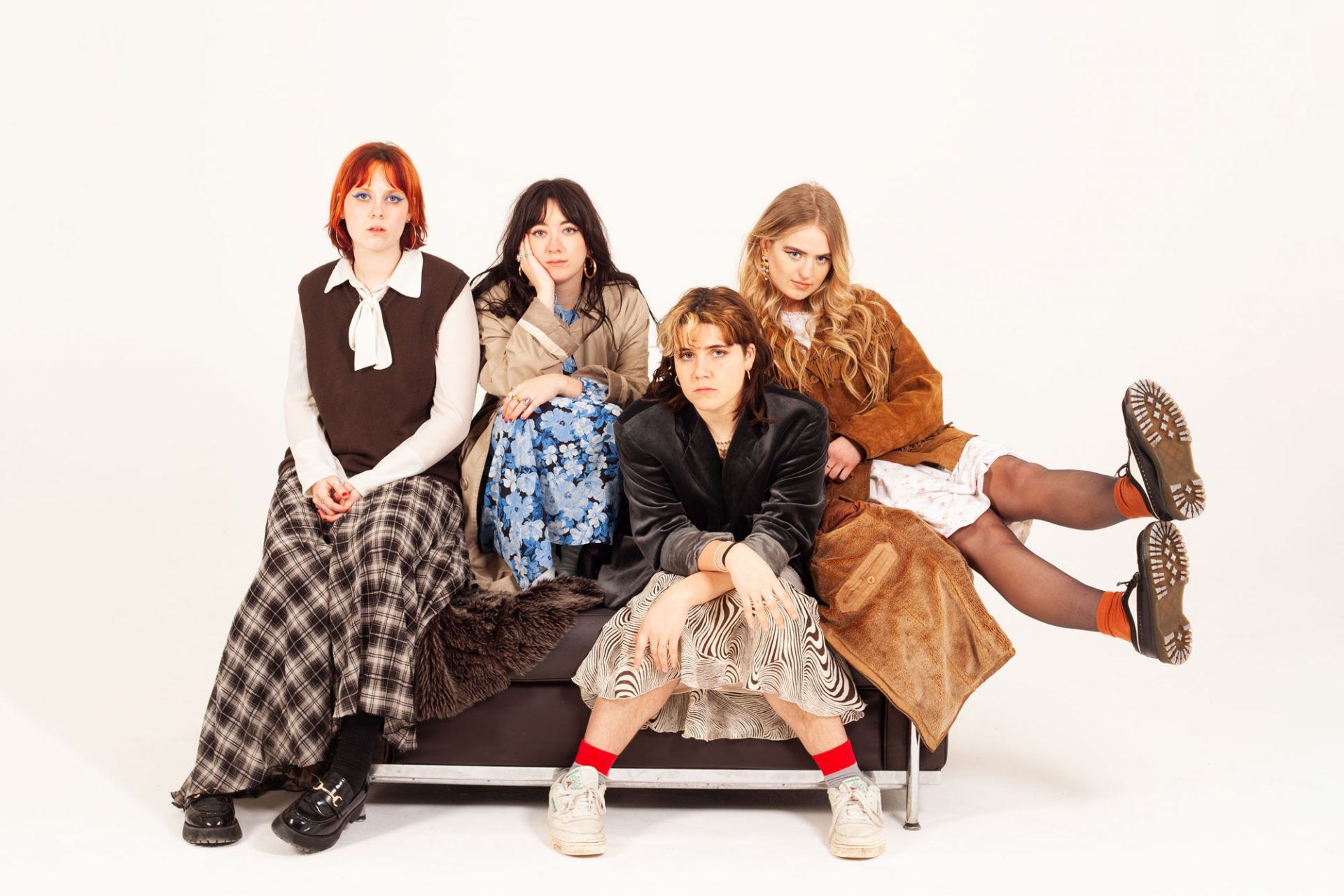 Lime Garden: “We started it because it’s fun, and we’re roommates”

“I’m sorry, I ate some cheese,” opens ‘Surf N Turf’, one of the scant few singles from Brighton geniuses Lime Garden. What’s not to love?

Lime Garden are hard to define. With a sound that has top notes of St. Vincent, Dream Wife and David Bowie, and undertones of Black Honey, Dead Coast and Blondie, they present a bouquet of psychedelic surf rock that is infused with the essence of disco.

The Brighton-based quartet are equally as unable to put a finger on it and merely run with their gut feelings when it comes to making music, preferring not to pigeonhole themselves so early on in their career. “Our sound changes over time – even our three singles sound pretty different – and as we’re learning new things, it is constantly changing,” says drummer Annabel Whittle. In fact, the band don’t put any pressure on themselves to stick to just one sound. “We’ve never felt the need to be restricted by giving ourselves a genre. We just make music that we like listening to,” says vocalist Chloe Howard echoing her bandmate’s earlier sentiment, and noting that to pigeonhole yourselves so early on in your career could be limiting for the trajectory in which you are aiming for.

Where their 2020 debut single ‘Surf N Turf’ transported you a woozy world in which you’re riding down West Palm Beach in a vintage Chevrolet towards the South Florida Fair, its follow-up ‘Fever’ was more direct in its existentialist contemplations that came in hues of space-age jazz. While it may be hard to pinpoint an exact reference from where Lime Garden’s sonic world has blossomed from, one thing is clear: it sounds like a group of friends who are simply having fun and putting their own stamp on a world in which music can be quite linear and uninspiring.

Having crossed paths via a Facebook group for the college that they were planning on attending when they left school, Chloe replied to a message that Annabel had posted, and the pair decided to meet up for a coffee at the Café Rouge in their local shopping centre. “I remember the first thing Annabel said to me: ‘Wow, you’re such a tall lady’,” Chloe laughs before Annabel doubles down on her statement, inciting laughter from the rest of the band. After scouting guitarist Leila Deeley at the same college, the trio eventually moved to Brighton and set their sights on making it as a band. They were, of course, missing a bassist until Annabel and Leila’s housemate Tippi Morgan came along. “Tippi is an absolute legend because she hadn’t even played bass before,” says Leila. Because of her extensive music knowledge and the way that she instantly clicked with the group, they asked her to learn bass guitar, and within a few months she was a part of the line-up.

As a band who released their debut singles just a few months before the pandemic hit, do they feel any pressure in terms of trying to get their career started? On the contrary, it seems as though the lockdown has been somewhat of a blessing for Lime Garden. “We started it because it’s fun, and we’re roommates,” Chloe says. “When things get serious, and you start working with other people, there’s a pressure on certain things, but the thing that we struggle with collectively is just making sure that it doesn’t become overwhelming and to keep it fun. There is [in the context of being a musician during the pandemic] an unavoidable pressure where there never used to be.”

By harnessing nonchalant vocal ambiguity and casting it amongst meticulously crafted incisive melodies, Lime Garden are drawing on their respective music consumption in order to create a sonic landscape that is unique to them. “We’ve always been very into keeping things a bit ambiguous and also letting people decide on their own versions of the song because it’s fun to hear,” Chloe elaborates. “It’s fun to think that when people listen to your music that they’re making a scenario in their head because that’s what I do when I listen to songs.” This open, yet ambiguous, approach is unsurprising with the knowledge that one of her earliest musical memories, and one of the reasons that she picked up a guitar, was because of a girl in her school who would always play ‘Yellow Submarine’ by The Beatles – a band who are well known for their eclectic and often undefinable catalogue.

Lime Garden’s effortless foray into the world of music hasn’t gone unnoticed. The release of their latest single ‘Sick & Tired’ saw them sign with So Young Records, and they’ve already picked up a whole host of radio plays, a sold-out headline tour, and a support slot with Katy J Pearson; it’s undeniable that the band have flourished throughout what has been a confusing time for many. With their upcoming single ‘Pulp’ serving a slice of avant-funk and dizzying post-punk, it’s impossible to say what will come next from the band, but it’s safe to say that they’re going to be completely fine. The future’s bright, the future’s… lime?

Taken from the August 2021 edition of Dork, out now.