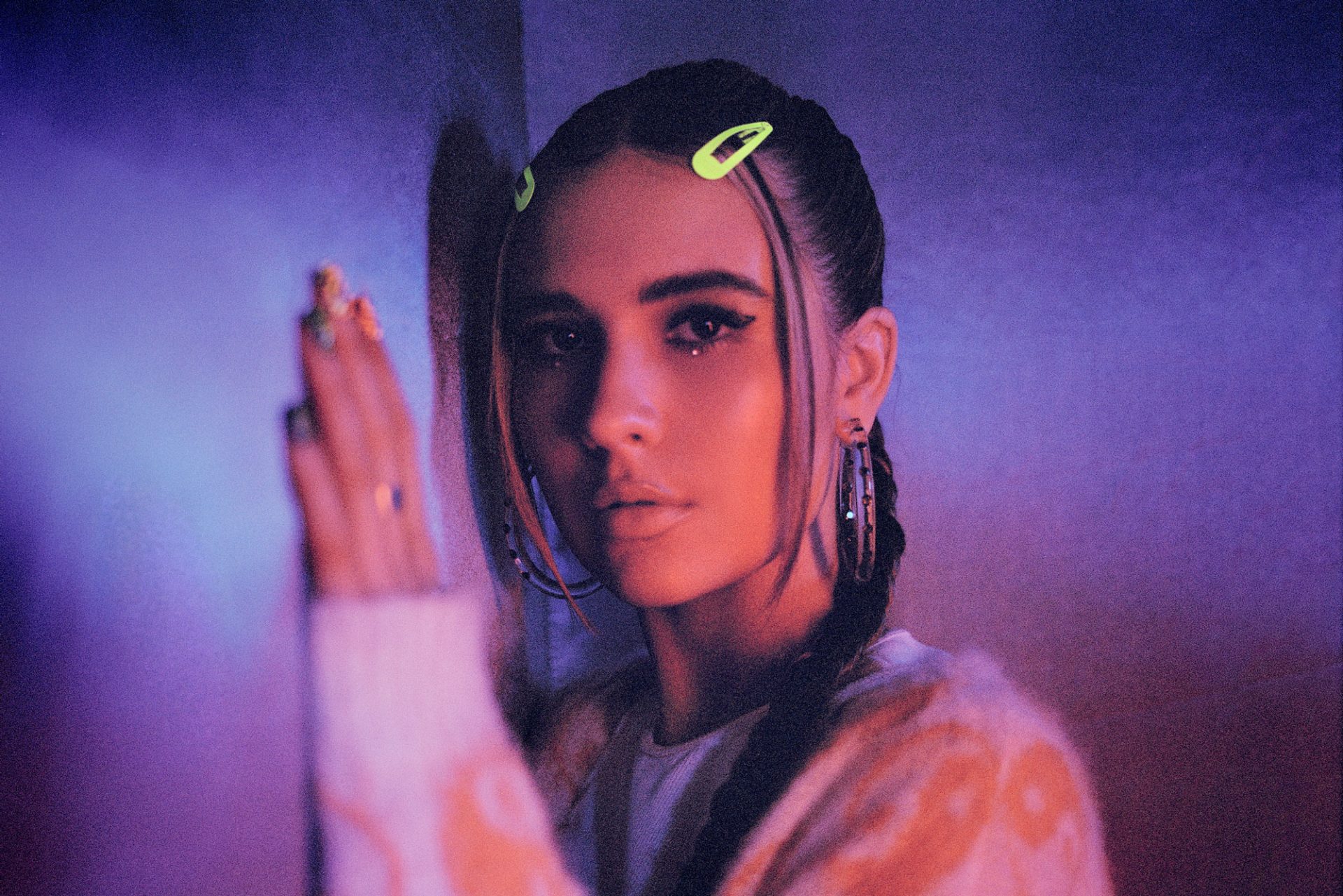 Mimi Webb: “I’m creating my sound and pushing my limits”

With three Top 40 singles already under her belt – including ‘Good Without’, which went Top 10 last year – the Number 3 spot on the BBC’s coveted Sound Of 2022 list, and a legion of fans on TikTok, Mimi Webb is a new force in pop.

In the currency of BIG pop, few things hold more value than harnessing pure goosebump-inducing emotion. Going in deep in matters of the heart and the maddening and beautiful ways it hurts and heals us. The best pop stars can do this almost effortlessly. Mimi Webb is only a year or so into her career, but she has already shown that this kind of elemental pop magic is second nature to her. She’s a star who embraces her feelings and puts every little piece of herself out there.

Mimi is riding a crest of a wave as she ascends mount pop, and it’s easy to see why. Bursting with personality and blessed with one of the most powerful voices you could hope to hear, she’s already made quite the impression with a Top 20 single, appearances on big-time US telly (hi Ellen!) and a boatload of buzzy online hype, but 2022 is all about taking things to the next level. “This year, it’s about doing everything times by 10,” says Mimi confidently. “I’ve got so much more music coming out. It’s about building that catalogue,” she says excitedly. “I’ll be touring so much this year. It’s going to be very intense.”

Mimi is incredibly comfortable with the job of being an actual massive living and breathing pop star. She’s at her happiest creating in the studio and relishes the pop game. “I absolutely love it,” she exclaims. “I really enjoy the promo. I really enjoy the routine. It’s something that I’m happy to sink my teeth into.”

She’s had to adapt quickly. It was only five months from releasing her first single ‘Before I Go’ to travelling to America and beginning to conquer the pop world. “It was very fast-paced and manic but incredible,” she explains. “I find it easier to be chucked in the deep end rather than have a pre build up to be anxious; I’m just like, no, chuck me in there, let’s do it.” That’s the striking thing with Mimi no matter what she says, you know she’s going to make it happen. You believe everything she says.

Mimi has always been destined to be a performer going right back to her days doing talent shows at school growing up in Canterbury and open mic nights while studying at music college. Any hint of stage fright or shrinking in the spotlight was prevented from an early age by her parents encouraging her to sing at every opportunity. “My mum and dad would always get me up to sing every time whenever we were in a restaurant. It was like, come on, we want to hear you sing, and I’d be like ‘Dad, that’s £5 then’!” she laughs. In a nice bit of serendipity, it was an acapella performance in a New York City restaurant that helped build that early buzz by blowing up on TikTok.with over 20 million views. Big Time.

Like any vibrant switched on pop star in 2022, Mimi recognises the importance of platforms like TikTok as a tool to build your audience and engage with your fans, and she sees it as a positive artistic space as she remembers the first rumblings of a real major breakthrough with last years signature heartbreaker ‘Good Without’. “Around the start of last year, when I was teasing ‘Good Without’ on TikTok, I was like, oh, this could be a thing we need to get this out ASAP. I’m really looking forward to being able to do that again this year with my new songs. I think it’s really nice with TikTok because you feel like you’re in control of your career. You can really help push those songs.”

With last year’s debut EP, ‘Seven Shades of Heartbreak’, Mimi introduced the world to her enormous voice and confessional stirring brand of pop. Vulnerability is a word that she regularly returns to as she emphasises how important it is for an artist to be in touch with your emotions and really open yourself up. It’s at the heart of everything about her. “I’m so open and vulnerable in my music with situations I’ve been through,” she says. “There’s always that worry that you’re putting it out there in the world and that certain someone will hear it but to see people connect and understand is so incredible. It’s amazing to see how I can put my vulnerability out there, and people can just take it and accept it, and it inspires them, and they connect completely.”

She’s already proven she can do soaring heartbreak anthems, but this year Mimi is excited about showcasing different sides to her music; think pulsing enormo-pop, like the fizzing electro rush of EP standout ‘Little Bit Louder’. “I’m creating my sound and pushing my limits,” she says of her time in the studio planning her next move. “I’m building up to a bigger project. It’s going to be my sound, but the nice thing is I can do a lot of different kinds of songs that will still fit in the same bubble. I’m enjoying doing some more upbeat stuff and then some really emotional ballads. It’s a mixture of the two. When I started as an artist, I never wanted to have just one sound. That’s the beauty of my voice and who I am as an artist.”

When you listen to a Mimi Webb song, whether it’s an inspiring electro anthem or a heartstopping ballad that leaves you in an emotional crumpled heap, you’re always getting an experience. You’re living those emotions with her, and she’s ready to ride that emotional wave to superstar success.

Taken from the March 2022 edition of Dork, out now.