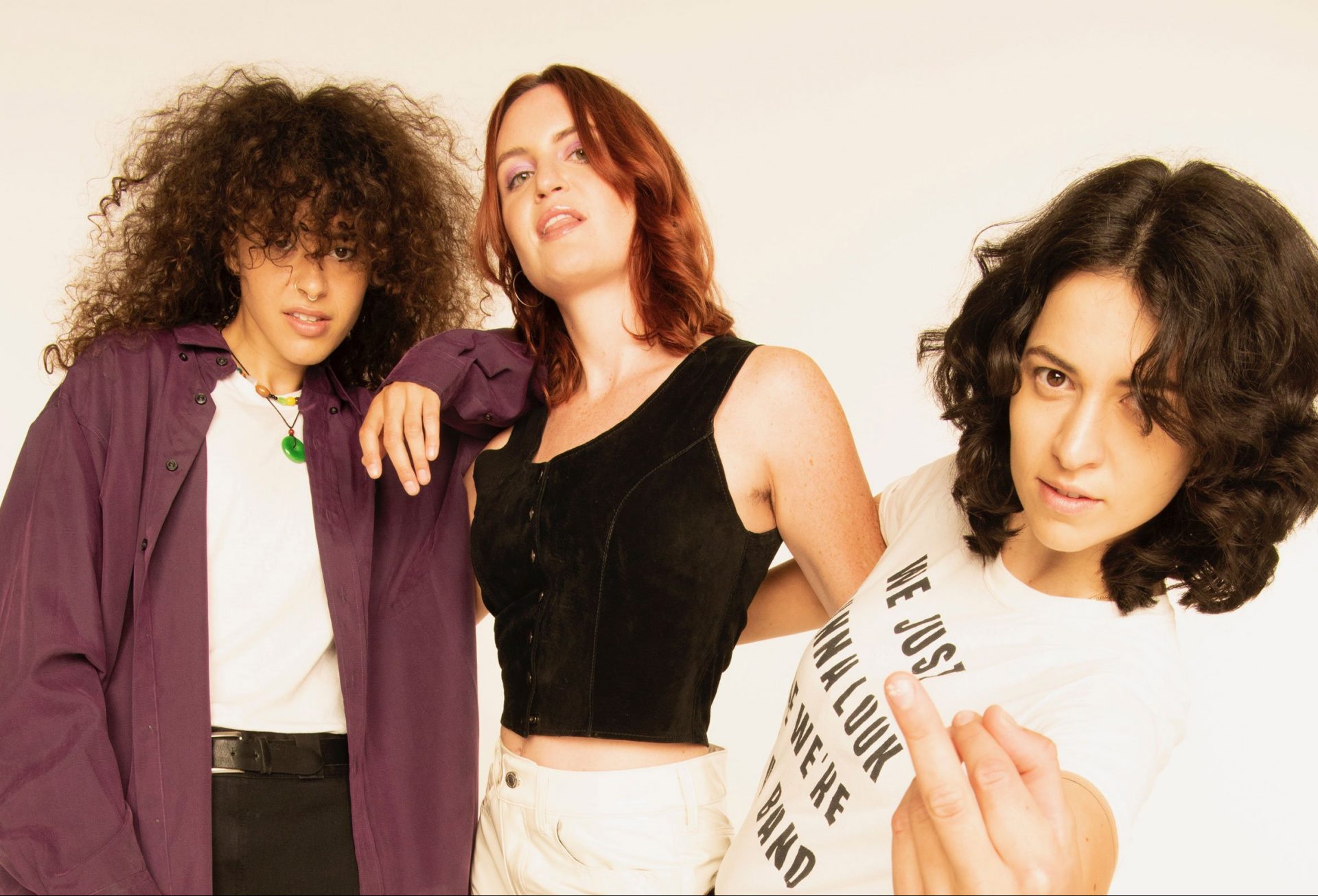 There’s a better than decent chance that MUNA are currently the BBOTP right now (that’s Best Band On The Planet, in case you were wondering – Ed). If you need convincing, their new singles ‘Anything But Me’ and ‘Kind of Girl’ should sort you out. Just make sure you’re atop of an appropriately sized horse first. We dropped the t’riffic trio a line to find out more about their stellar self-titled third album, due this June.

Things are feeling big in the world of MUNA right now. Gigantic, even. Though they’ve always been filed firmly under brilliant – they’re former Dork cover stars, dontchaknow – the last few months haven’t felt simply like a band in good form. If anything, MUNA feel like a full-on cultural reset.

“I think it’s a really exciting time to be us,” enthuses guitarist Naomi McPherson, “and also a scary time! Quite frankly, the more attention we get, the more I feel my own insecurities are coming to the fore.”

That’s the thing about realising undoubted stellar potential. The plaudits mean the beady eyes of the musical zeitgeist snap into focus, and the expectations head through the roof.

“‘Silk Chiffon’ was just purely joyful and not too overthought. It felt like an end credits song from an early 2000s rom-com”

“I’d like to try to be really present and enjoy this new phase we’ve entered because it does feel so hard-earned,” they continue, as open and honest as you’d expect from a band that connects so strongly with so many. “I’m trying not to be too hard on myself. Katie [Gavin], Jo [Maskin] and I have worked so fucking hard for damn near a decade in the hope that people would eventually see the potential we saw in ourselves. Weirdly, it feels like it’s finally kinda happening, which is a trip. I’m grateful to everyone who helped us get here, including all the fans who’ve believed in us and our music since day one.”

If those people were waiting for a payoff, they certainly saw the dividends last year. Signing to Phoebe Bridgers’ Saddest Factory Records, the trio enlisted their new boss to guest on ‘Silk Chiffon’, a song so brilliant it became a genuine contender for the best track of the whole damn year.

“It was a song we felt was such a shift from our previous work, tonally speaking – which was a good thing,” Naomi offers. “We make such deeply emotional and, at times, very sad music. ‘Silk Chiffon’ was just purely joyful and not too overthought. It felt like an end credits song from an early 2000s rom-com. People’s reception to it has been really fun and funny. We like all the ironic “Life’s So Fun” memes and TikToks because bitch, we’re depressed too! And sometimes life isn’t so fun! But sometimes it is, you know?”

Not only was it a significant point in MUNA’s musical evolution, but it also turns out it was the first music we heard of their forthcoming, self-titled third album. Starting work on it straight after the release of previous full-length ‘Saves The World’ (“We tend to just keep writing once a record comes out, or at least Katie does!”), the plan was simple; push for the positives while still staying true to who they are.

“We wanted to make bold, interesting, savvy musical decisions with regards to arrangement and production,” Naomi explains. “We wanted it to feel joyful and fun and a bit less heavy-hearted – though, of course, just as emotionally raw – as the last two records. For the OG fans, it was fun to make things we knew could toy with their expectations, but also satisfy them in the sense that it’s MUNA still through and through.”

And that it certainly is, which is why finally getting around to a self-titled album feels so apt. As Naomi admits, it “feels like a right of passage” for the band, “especially after the first record.”

“Beyonce’s self-titled album is quite possibly the best album ever made,” they offer. It might sound like a high bar to set for yourself, but trust us – we’ve heard the album, and it can take it.

“With it being our third record, this sounds woo-woo maybe, but there’s something powerful about the number three. There are three of us. The album cover concept came before we titled it – a portrait of each of us, then the band name – and it just felt right. Self-titled, fuck it.”

That “fuck it” attitude serves MUNA well. Anyone who’s heard the first taster of the record, ‘Anything But Me’, will know that with great attitude comes infinite power. Take that opening lyric. “You’re gonna say that I’m on a high horse / I think that my horse is regular-sized / Did you ever think maybe, you’re on a pony / Going in circles on a carousel ride?” Iconic, right?

“I bugged out when I first heard that line,” Naomi admits. “It’s so clever and funny, just like Katie is. She’s the queen of a cheeky, funny opening line.”

That’s not the track currently tugging on Naomi’s affections, though. “One of my faves is ‘Loose Garment’,” they admit. “It’s a style of production I had wanted to figure out how to do for a long time, and we just didn’t have exactly the right song for it. When this came along, and we decided to go the way it went style-wise, I was geeked. It’s such a deep cut, but I love it. But also, overall, I think ‘Kind of Girl’ is one of the best MUNA songs to date, period. It’s so hard to pick, man.”

“It’s so clever and funny, just like Katie is. She’s the queen of a cheeky, funny opening line”

It’s something the UK will have to do when MUNA finally return for a pair of live dates this May. With a showing at seaside spectacular The Great Escape planned, they’re also set to play a seemingly intimate show at London’s Garage a couple of days before. We say intimate because it sold out in what felt like seconds, with a multitude of fans desperately bemoaning their inability to score a ticket. Don’t worry too much, though. They’ll be back.

“The UK is one of our favourite places to play,” Naomi offers. “It was the first place we had fans. So yeah, we owe a lot to all of you and will definitely be back for more this year.”

But until then, there’s so much more to come. With one of what’s sure to be one of 2022’s highlights on the slate, MUNA’s time is here and now. Hold your horses, and prepare for one hell of a ride. ■

Taken from the May 2022 edition of Dork, out now. MUNA’s self-titled new album is out 24th June. They’ll hit the UK this May for shows at London’s Garage (10th) and The Great Escape (12th).