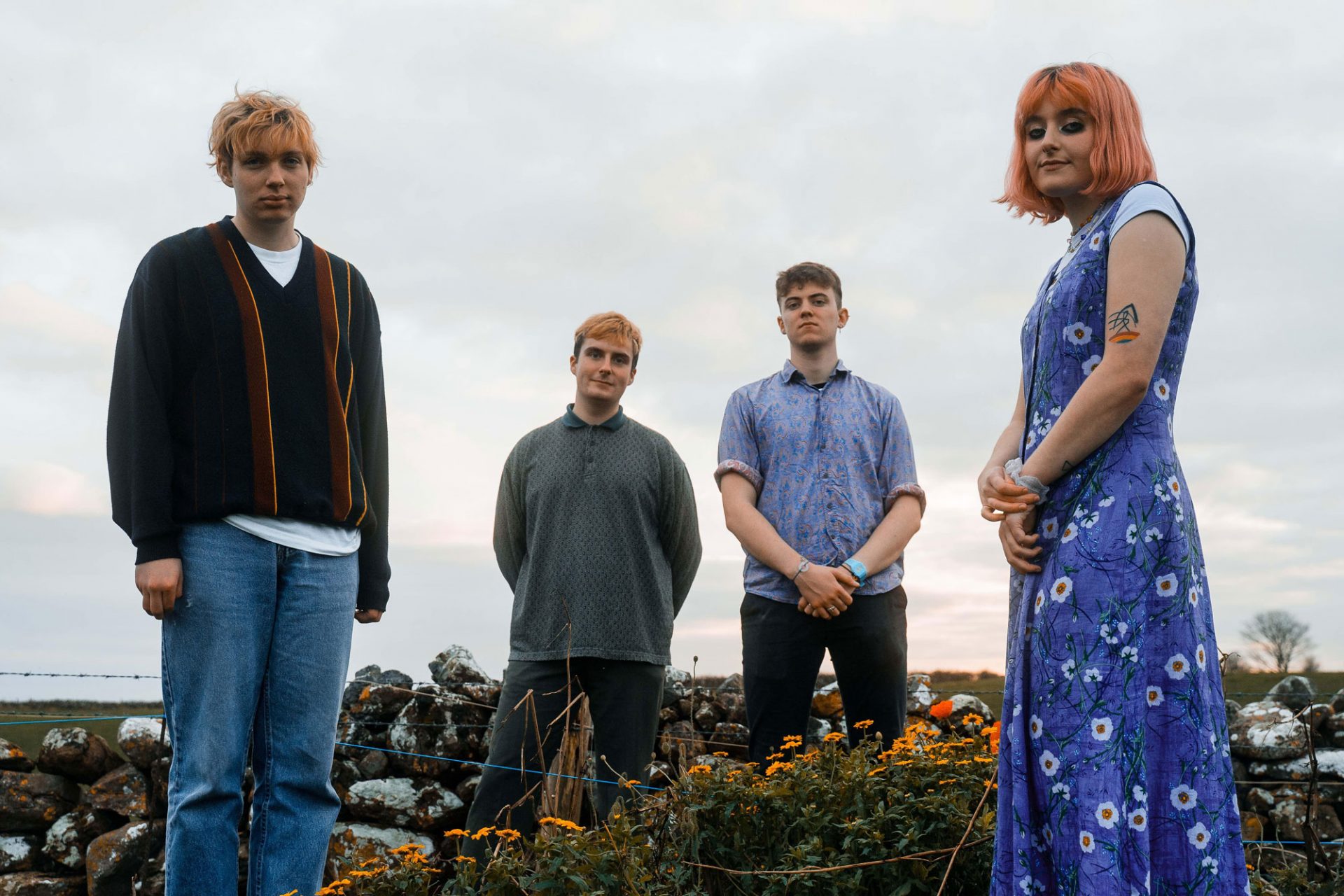 NewDad: “We don’t want anything to be too drab or serious”

With lo-fi 90s vibes aplenty, Galway four-piece NewDad are a like a great big, shoegazey hug – something to blitz away the dreary January blues. And they’re bang on trend, too.

“All my mum cares about is that Robert Smith is on that Gorillaz song – it’s crazy!” jokes Áindle O’Beirn of NewDad, Galway’s finest new band. The four-piece only released their first single last year, but they’ve quickly risen up the ranks. Nestling into BBC 6 Music’s A-List and brushing shoulders with big names left right and centre, there’s no doubt that their rise so far has been fast and furious.

Ireland itself is churning out a whole host of exciting new music – from Fontaines D.C. to The Murder Capital, something of a punk renaissance has swept the shores of the country. “We’re very happy that guitar music is coming back, because it’s what we do!” remarks Áindle, who plays bass in the band. However, whilst a heavier sound is having its heyday, NewDad bring something fresh. Operating in a hazy, dreamlike world, their sound feels worlds away from their contemporaries thrashing guitars – in the best way possible.

“When we’re writing a song, and we think it’s too heavy a sound we will try and put something in that brightens it up a bit. ‘Like ‘Blue’, a lot of it is sad…” lead singer and guitarist Julie remarks. “…but it’s got that funky beat!” Áindle jumps in. There’s something innately soothing about their tracks, and it lies within that sweet spot of sad and upbeat. It’s a direct encouragement to leave behind your thoughts and sway in time. “We don’t want anything to be too drab or serious – we’re not very sad people in real life, so we want our music to reflect our personalities a lot.” Áindle continues.

Over Zoom, that upbeat part of their music comes across fiercely – it’s all easy laughs and smiles and excitedly talking over one another. That very thing that asks you to free your inhibitions stems from the laidback nature of the band themselves. There’s a definite sense of self-assuredness about them, too. “We know ourselves, and what is NewDad,” guitarist Sean lays out. That confidence seems to only solidify with each release – none more than their upcoming ones. The new year will see the band releasing their debut EP, produced by Chris Ryan, who has previously mixed their tracks.

“When we’re writing a song, and we think it’s too heavy a sound we will try and put something in that brightens it up a bit”

“We went into the studio where he works, and he was just phenomenal. He’s just a pro – he’s like a seasoned professional, and he’s a young lad, so he’s amazing. He was so welcoming, and it was just such a relaxed atmosphere – it felt very natural,” Áindle recalls. Prior to this, the band had recorded their tracks at home and sent them to Chris remotely – the move to a studio recording was a major step.

“The songs evolved further in the studio. There’s such a difference in these tracks from all the tracks before – you can hear just from having them done in the studio and being so hands-on with Chris, the EP is just streets ahead in every way from what we’ve done before,” Julie assures. The EP’s first single, ‘I Don’t Recognise You’ was out at the end of November, and as the band hint, it’s phenomenal.

“I had a guitar idea and the chords in my head,” remembers Áindle. “I recorded it probably two years ago – I’d written it, and it was just sat in my notes. I was messing around with Julie’s guitar and started playing it, and they were all like “that’s nice, we should work on that”, and we did.” ‘I Don’t Recognise You’ details the difficult situation of someone you love losing themselves – it’s quintessential NewDad but blown to new proportions. Julie’s ethereal vocals, of course, lend the track a familiarly surreal effect, but the bridge is where they come into their own; taunting, swirling instrumentals propel the band’s sound towards something euphoric.

That euphoria translates on stage too – the band recently played a socially distanced gig in Galway. Whilst there’s doubt amongst music fans on whether they’re a good substitute for the sweaty, pints flying gigs we know and love, NewDad are decisive that they’re a good alternative. “It didn’t feel like a socially distanced gig when we were playing – everyone was sat down, and the room was still filled with tables,” Sean explains.

“I think for bands like us, it does benefit us quite a bit. We’d love to be playing at a normal gig, but for our sound it’s not too bad. I feel bad for a lot of more high energy acts because I don’t see an alternative for them right now for their live shows, but I think it was fine for us. We were just trying to have nice chilled vibes for our gigs.” Áindle continues. The gig also happened to be one of the best they’d played: “It was probably the best we’ve ever sounded,” Sean grins. Having finished recording their EP just the day before, the confidence of the band was at an all-time high, and rightly so.

Given the amount of time to spend writing this year has afforded the band, the debut EP may be shortly followed by another treat. “It’s really encouraging to see loads of other artists releasing loads of music and using the time to their advantage – we’ll never have this much time again to write and record,” Julie reflects. “We’ve been writing so much that we have another EP written basically, so we’d like to get back into the studio.”

Music has been a saviour for a lot of us in this time – the constant stream of new releases has been the light at the end of the tunnel. NewDad have brought a continually calming slice of shoegaze to the past few months and continue to do so. “The EP has a nice kind of flow, and cohesion about it when it’s all put together,” tells Sean. ‘I Don’t Recognise You’ hints at the ambitious tranquillity of the tracks to come – if they’re as good as their tracks so far, maybe this EP might be the antidote to get us through right now.

Taken from the February 2021 edition of Dork, out now.