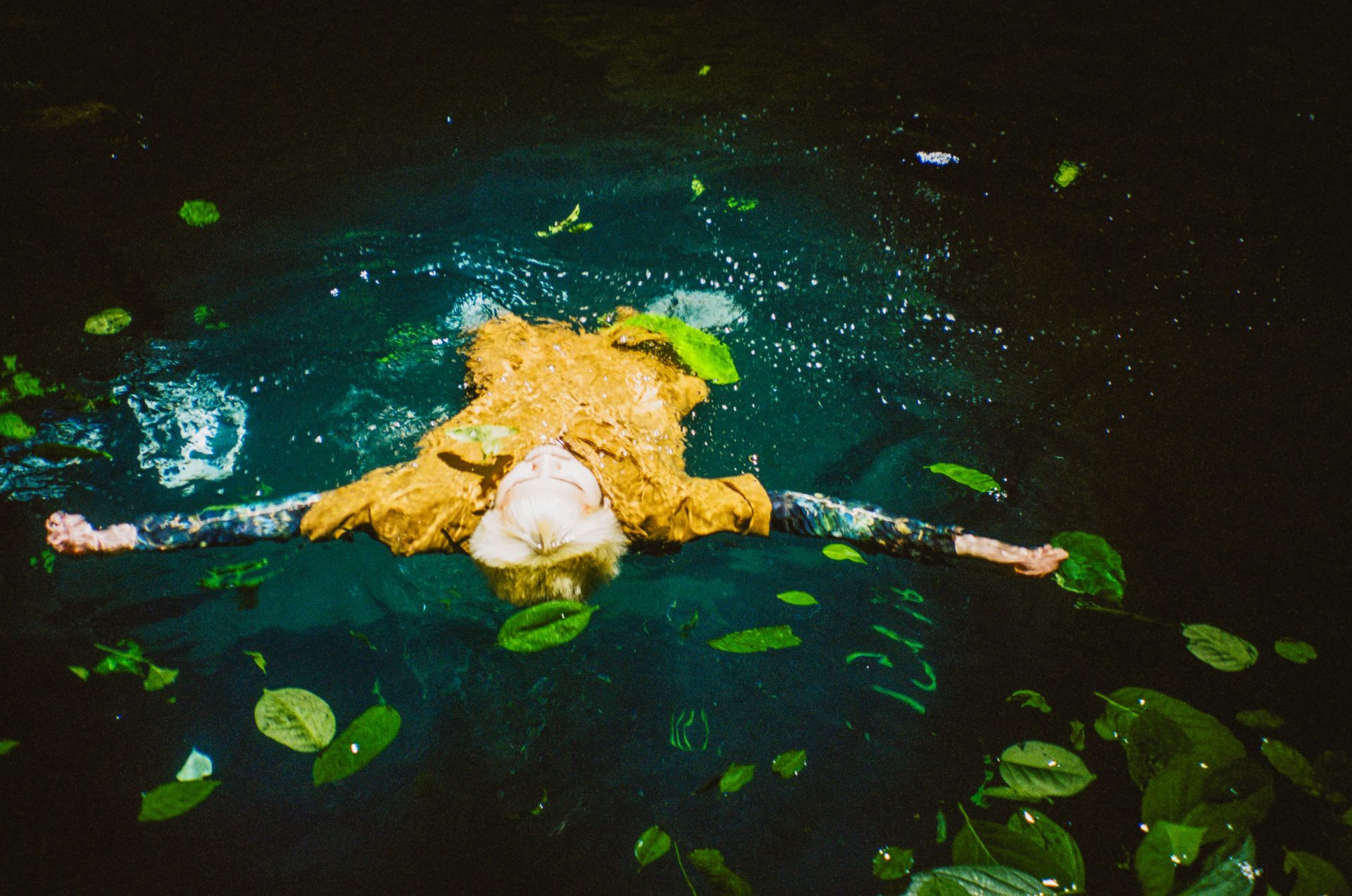 No Rome: “They say it takes your whole life to write your first album. I feel like that’s what happened to me”

If it feels like you’ve been waiting a long time for No Rome’s debut album, erm, that’s because you have. But rejoice! It’s finally here! And it’s brilliant!

For the first time in a while, No Rome is on holiday. He’s having a month off in New York – well, kind of, he’s on the phone with us – before he hops back over to the UK for album promotions.

And we finally have it! The big A! Four years in the making, No Rome’s debut ‘It’s All Smiles’ is imminent. Where to begin with it? Created – like all records from the past year seem to be – in his childhood bedroom back in the Philippines, where he’d been stuck while his parents recovered from COVID. It’s a deep dive into his psyche, featuring vignette lyrics and staring-at-the-ceiling-in-the-middle-of-the-night OST interludes.

Much like his frequent collaborators and labelmates The 1975, it pulls from every genre imaginable and invents its own sound, hitting the bullseye surrounded by emo, garage, R&B, grunge, electronic (deep breath) and pop. A sprawling soundtrack to his life so far, merging distorted guitars with vibrant synths and wobbly harmonies with speedy talk-rapping, it’s a rabbit hole worth getting lost down. It’ll be the first time since last March he’ll be popping over here, dropping in for an album launch party on 2nd December, but of course, we got the scoop ahead of time. Is it really all smiles?

This has been in the works for a really long time. Did the last couple of years slow down that process at all?
I’d say 2018, 2019 was about getting signed and becoming this full-time musician, figuring out how I want to do that. Not to be too pretentious or whatever, but, you know, they say it takes your whole life to write your first album, and I feel like that’s what happened to me. I had little bits of projects here and there. I think 2020 was just right, because, amidst a pandemic, I had nothing else to do but make music. You know, there wasn’t any distraction. I think that was like one of the beautiful thing that happened last year that I just kind of got around to really getting in deep with it. All my focus was in it; I was just locked in for months writing, writing, writing. So it’s kind of an intense but beautiful personal process.

So were you finishing all the tracks up remotely?
Oh, yeah. I worked on this album with BJ Burton, and George Daniel from The 1975, and we all did this remotely. It was nuts, except for I think when I started finalising the vocals, which I did in London, most of it was done over FaceTime, hours on FaceTime and Skype discussing what I wanted, where I wanted it to go. It was kind of weird to do it, I didn’t envision doing my first album in that way, but I feel like that’s what made me want to experiment more. Because everything was remotely done, you have time to think about stuff and digest stuff. When you’re in the studio, it’s like, “we got a month rented out in the studio; we got to finish the album in a month”. So yeah, it was a pretty weird experience.

You’ve been working with George a lot throughout your entire career. What’s your relationship like with him? Do you feel like The 1975 influenced your production style, or do you bring the same ideas to the table?
Like, he’s like my boyfriend xx <3. Yeah, no, I feel like we do bring the same ideas because we’re inspired by the same things. Specifically George, because I work very closely with George, we just get each other. He gives an idea, and I’m like, oh my god, I wanted to tell you that, and he just put it in or something like that, and I’m like yo, that’s what I was thinking about! So there’s this musical chemistry you have; once you find somebody like that in the music field, you want to go and roll with it.

Speaking of collaborations, you’ve obviously done a lot in your time, but this album is all you. Was there a reason that you wanted to do it completely solo?
I love making music with people. I enjoy that. But this is more personal; I really didn’t feel like it needed room for a feature. I was trying to do one feature, but I just ended up thinking that, nah, I should do this alone.

There’s a lot going on on the album. It’s sort of like, emo, electronic, a little bit garage. It feels like it builds on the stuff you’ve done before but also deviates from that. What kind of influences were you feeling on this one?
A whole lot. I feel like it’s my most maximalist record, just because there’s so much influence driven from it. And the idea was to kind of make a sound. I guess I don’t really like being shifted to one genre, because my favourite artists make all different kinds of music. There are influences like trip-hop, there’s like, Bjork effects to it, and then you got, like, All American Rejects, TV On The Radio vibes. I’m lucky that I’ve met BJ and Sachi along the way, who helped me kind of open it more to where I wanted to go. I feel like I wanted to make something in that world for people who actually listen to music, people who actually listen to albums and stuff like that. That’s one of the inspirations, you know what I mean? It’s like all different sounds, but the production is cohesive. There’s like an aesthetic to it, but it’s all different influences.

A lot of pop these days, there’s a lot of that kind of pop-punk influence coming through, but on this record instead, you’ve done it in a classic emo-y way, like an American football type of way. Then there are bits of Sonic Youth…
For sure, Sonic Youth especially. Then Mike Kinsella [from American Football] is one of my favourite songwriters, which I listen to a lot, and I guess it just comes out naturally. I grew up listening to Sonic Youth; Kim Gordon is also one of my favourite icons, I guess being in my childhood home with those records, because I wrote the whole album in the Philippines, back listening to my childhood records I used to have.

“It’s a pretty dark album, because it was a dark moment in time”

What was going on in your life when you were writing it then? Were you quite lonely?
The whole idea of ‘It’s All Smiles’ is music you can listen to when you’re alone. That’s why I like it’s like a maximalist setup. You can lay in your bedroom with the headphones on and listen to it. Not sure if people want to throw it into clubs, but that’d be sick. I’m sure it’s not that kind of music, which I did used to make, but it’s more like a sit-down, put it on your headphones kind of thing. There was a lot of personal stuff going on. There’s one song that I wrote about, it’s called ‘Secret Beach’, which I guess was the most intense one I wrote was because, at the time, I was diagnosed with some mental illness, and I was caught up in that loop. It’s a bit of a personal album; I feel like a lot of the lyrics were the things that actually happened. I tried to paint a picture of that moment, what I was thinking and seeing. It’s a pretty dark album, because it was a dark moment in time that I feel like I needed to let out.

There’s also a lot of instrumental moments on it. Where did the idea for those come from? Was it just like a little production moment?
Yeah, I think it’s a production moment, but at the same time, I’m paying homage to my favourite records growing up. It’s like, you would not enjoy it if you clicked on it on Spotify at random. You know what I mean? It’s one of those. But it needed to be on the album to get the whole mood of it. I wanted songs where there was a little bit of lyrics in the intro that goes into a full production soundscape thing, and that’s the idea. It’s almost like an OST vibe.

Are there any tracks on here that you’re particularly excited for people to hear?
I mean, I love the whole album. We just put out this new single called ‘I Want U’; that one I’ve had since 2019, so I’m really excited for people to hear it. Oh, it’s so hard. I like ‘Secret Beach’, just because it’s such a weird combination of inspirations, you know, the heavy guitars and the kind of running rapping vocals. The whole idea of the song is I’m talking to myself, because there’s a filtered voice on the intro, then it goes to these different vocal effects. So those two songs, but I’m sure it’ll change as the weeks go by.