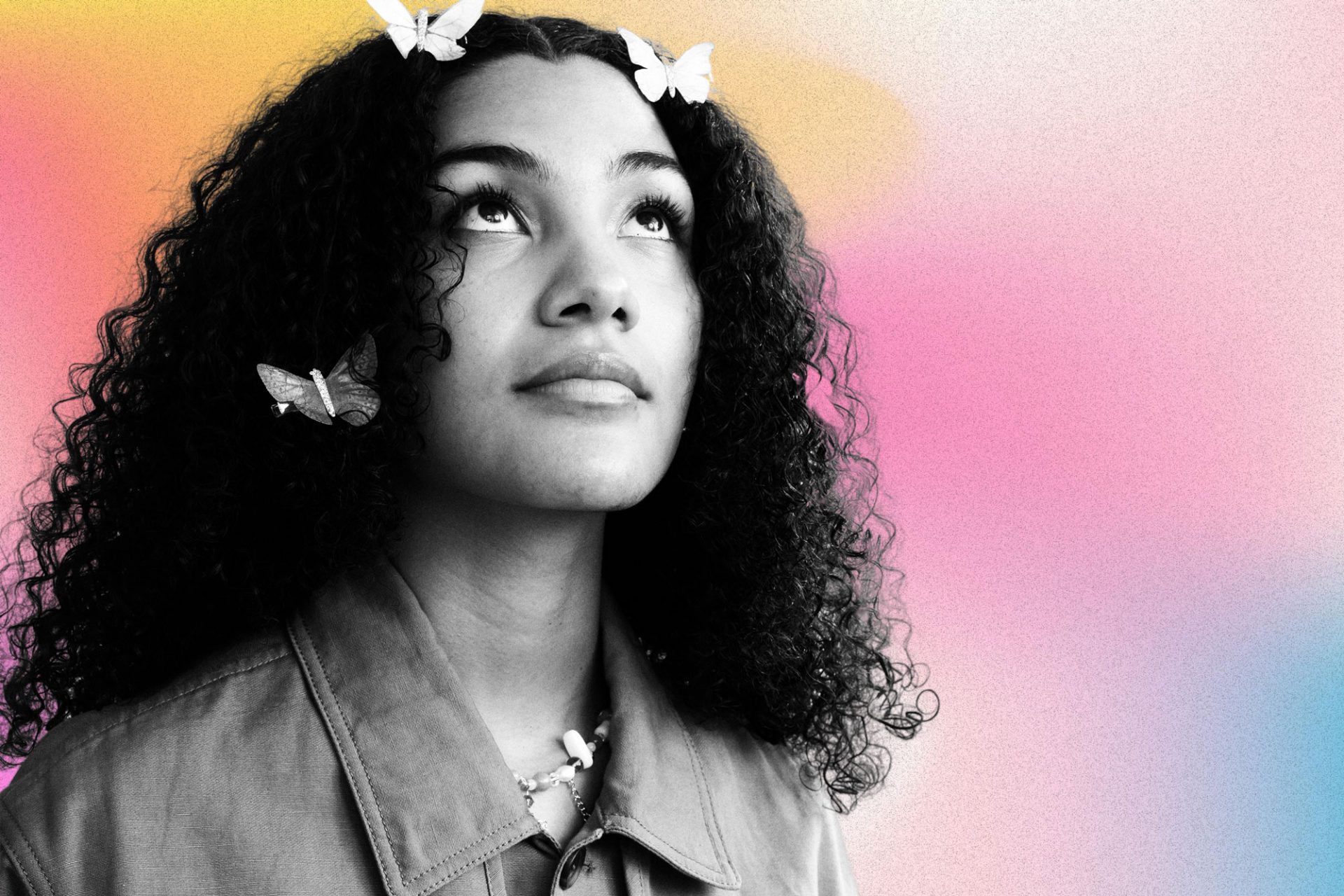 Olivia Dean: “If you can be your own best friend, then you’re laughing”

As she approaches the release her new EP ‘Growth’, London’s Olivia Dean reflects on a year in which she’s got to know herself a whole lot better.

“I feel like things are a lot better than they were this time last year, so I can only be grateful,” says Olivia Dean, as she ponders a period in which she has made great emotional and musical strides. Navigating her way through a stint of upheaval, uncertainty and isolation, she’s come out the other side with a greater understanding of her musical gift, deploying those innate talents to stunning effect on a new EP that looks set to reinforce her status as one of our brightest new songwriting talents.

“It’s been the most interesting year of my life,” she explains. “Considering everything, I’m pretty proud of myself. The first half of the last 18 months had been pretty hard. I spent a lot of time by myself in my flat.” The requirement to lock yourself away and lock yourself down was challenging for an artist who thrives on the visceral power and thrill of live performance. “I see myself as a live artist,” she affirms. “That’s what makes things feel full circle for me. Getting out of the studio and playing the songs live. I definitely feel like I write songs to play them. I was left feeling quite confused about what I was doing and what was my purpose.”

Fortunately, though, things are now looking up. “I have my two shows at the Jazz Cafe, and it feels like things are coming back to some form of normality,” she smiles. “I’m getting on with it. I’ve been very lucky to get in the studio and write and finish off this project,” she says excitedly. “I get to go to the pub and hang out in the park when it hasn’t been raining like it has EVERY DAY for the last two weeks.” Ah, the good old British weather. Forever spoiling our plans. Still, not even the weather can spoil where Olivia’s headed next.

The new music she has been working on provides something of a considered soundtrack to this most unusual year. “I’m really proud of this project I’ve made,” she begins. “I see it as a time capsule of the last year. It’s quite downtempo, but I think this last year has been like that. It feels like the natural way for it to sound.”

The EP is called ‘Growth’, and it radiates with all the soulful warmth and tender emotional resonance that pierces through all Olivia’s music. “I’ve been singing since I was 8 years old,” she says of her formative musical years. “I always remember it being something that I wanted to do, but I didn’t start writing songs until I was 15 or 16.” When she did start writing, the songs she was creating became an outlet for feelings that she struggled to otherwise express. The power of music became Olivia’s language. “I was thinking about why I started songwriting, and surprisingly, as a person, I’m not really good at talking about how I’m feeling,” she says. “Especially with the people closest to me in my life. It was an avenue for me to express myself and figure out what was going on in my brain in a roundabout way rather than addressing it with the person.”

“I said to myself I wasn’t going to write sad music, but I think that’s what I’m good at”

All that internal soul searching has fully manifested itself in a work that is full of depth and reflection. “The songs are some of the most intimate music I’ve ever written,” she reveals. “It’s really personal. I’m the most unsure and scared about how it will be received.”

Perhaps the most frightening thing about wondering how the stark emotional songs will be received is the absence of playing them live and feel the connection between audience and performer. “I haven’t had the chance to try them out as I had with my song ‘Echo’ from my last EP,” says Olivia. “I was playing that for a year before it even came out. I was confident it was good because I had the validation from people going to gigs and telling me I love that one. With this music, no one has heard it.”

That sort of validation is important to Olivia, and it has left a void in her musical life. She tells a story of how she was organising a club night last year right before lockdown. “I was putting on a gig, and I started this night called Out Out, and I wanted to make it a monthly night and get my mates to play, and I was headlining the first night. I had just put out ‘Crosswords’, and everybody came down. Some people didn’t come because they were worried about this thing called Coronavirus, and I was like, ‘naaah, come down, it’s fine, don’t worry about it’. I played the song that had only come out a week before, and it got to the chorus, and everybody started singing it. That was something that you see on live performances at Glastonbury, and just the people singing it back hit me. I was like, ‘oh my god, people are connecting to this music’. I’m holding on to that moment, hoping that something else like that will happen again.”

The importance of connection and both providing inspiration and comfort to people listening to the music is central to Olivia’s work. “That’s the reason why I do it, really,” she says. “I want people to just feel understood when they listen to my music. That’s what made me fall in love with the artists who inspired me to make music, like Amy Winehouse, Lauryn Hill and Aretha Franklin. Their voices and the words that they used made me feel like a person. It’s really easy, especially in the world today, to feel super disconnected and anxious and internally think I’m feeling all these things but wondering if anyone else is feeling them. I want to make people feel connected to each other.”

The songs that make up ‘Growth’ come from a subtly different place, both emotionally and sonically. Despite having all this free time cooped up in her flat, Olivia didn’t put pressure on herself to constantly create. “I don’t like to preplan too much. I don’t write too much. I don’t write a song every day,” she explains. “The best ones are the ones which I’m really emotionally connected to. I need to build up to them. In comparison to my previous projects, these songs are much more introspective. They’re more about my feelings about falling in love again, being quite reserved with that and having some growing to do. It’s about having some boundaries when falling in love. I hope I’ll look back as I do with most music and think, oh, I really learnt something. That was a period of learning. I’m still very much in this period. It’s all live thoughts.”

The EP finds Olivia working with different people for the first time, but the mood is more brevity and emphasising what isn’t there rather than throwing the kitchen sink for a big sound. The more considered and soft approach felt right. “When I first started writing, it was just me on my piano,” she says. “That’s how this year has felt. It’s just been me and my piano. I didn’t really want to do too much to them. I just wanted to keep them as is and just let the songs speak. It’s less produced and a really good stepping stone to my album that will come in the near future.”

The power of the songs very much comes from the emotion and the delivery. “They’re all super dramatic and kind of sad,” laughs Olivia. “I said to myself I wasn’t going to write sad music, but I think that’s what I’m good at.”

In many ways, the last year has been a year of reflection and discovery for Olivia as she processes how her music and artistry fits within a wider context. “Music is art that reflects the time you’re living in. Whether that’s a really personal thing in your immediate life or the bigger world, that’s the beautiful thing about music,” she says. “It hasn’t been something I’ve experimented with yet, but it definitely is something I’ve been building myself up to do. It’s scary commenting on big issues. I find it funny that artists are expected to be really politically switched on, but I’m still learning and excited to start exploring. Everything that happened with Black Lives Matter specifically has really affected me and my perspective on life, and that’s something I’m going to explore going forward.”

The events of 2020 and the Black Lives Matter movement have had a profound effect on Olivia. “I’m still working through those thoughts,” she explains .”I’m figuring out how I feel about being mixed race and Black, and that’s something I was still processing when Black Lives Matter hit, so I was like, woahh. It’s still quite emotional for me. Sometimes you have to process something and get out of the really emotional bit to write something about it. I think I’m getting there, and I hope I can offer an interesting insight. I don’t see myself as a political oracle. I’m just little old me.”

Olivia is certainly an artist who is measured and thinks deeply about her work and its effect. She wants her music to have a message as best encapsulated on ‘Growth’’s stunning lead track ‘Be My Own Boyfriend’. “I’ve got a lot of different sides to my personality,” she states.  “Sometimes, I can be very emotional and dramatic. Other times I’ve got my nothing really matters hat on. ‘Be My Own Boyfriend’ encapsulates my message, and the main thing I learnt from last year was all you can do is just try and be happy every day. The main thing you can do to be happy is just getting comfortable with yourself and the inside of your brain. I started therapy over the last 18 months, and it’s been the best thing I’ve done. I’ve learned so much about myself. If you can be your own best friend, then you’re laughing.”

Taken from the August 2021 edition of Dork, out now. Olivia Dean’s EP ‘Growth’ is out now.