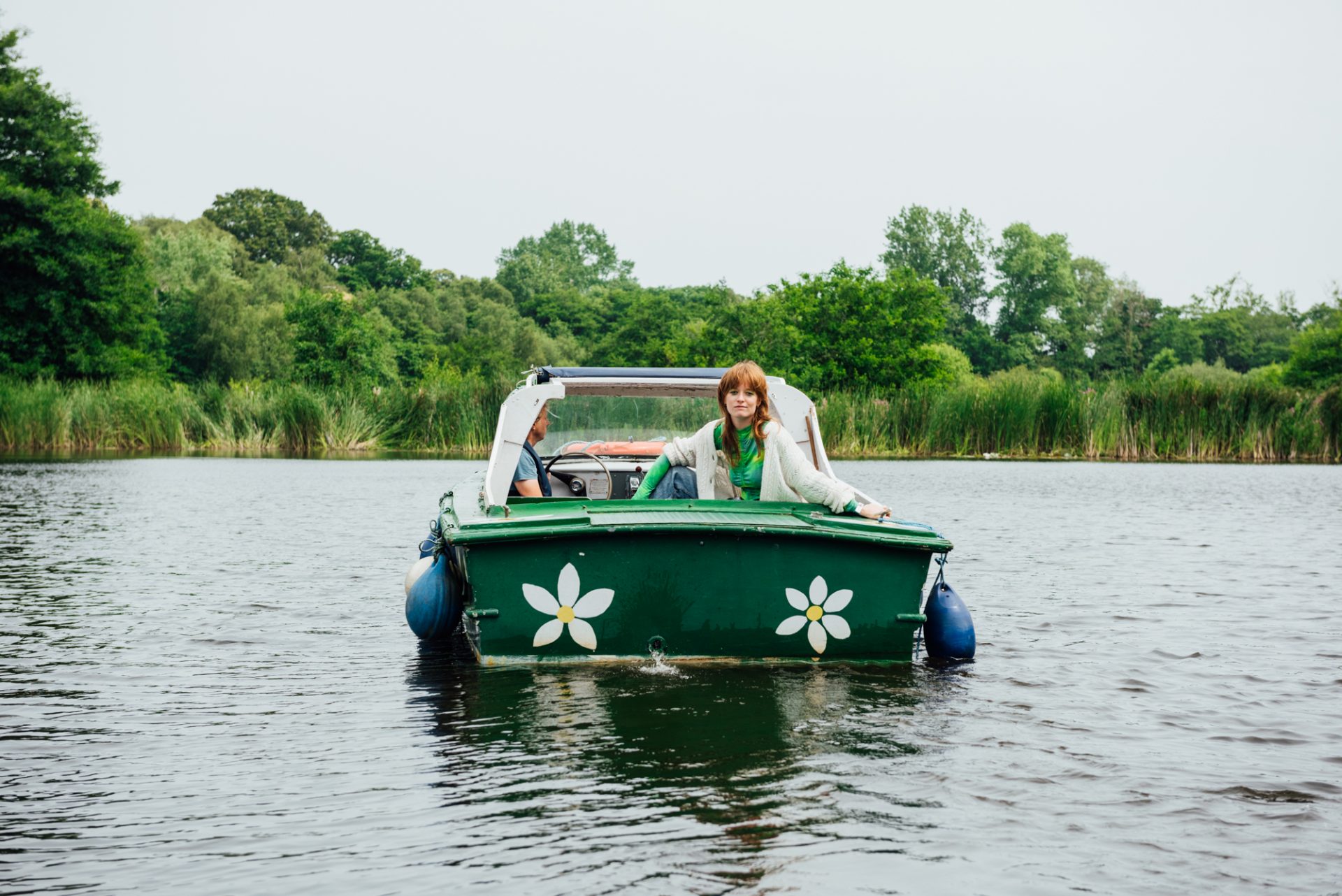 Orla Gartland: “I don’t want this to be the soundtrack for a sad time; I want it to be a soundtrack of life”

Dublin’s Orla Gartland charts the ups and downs of growing up and adjusting to adulthood (urgh) with a hefty dose of camaraderie and wit. Her debut album, ‘Woman On The Internet’ is really very special.

Orla Gartland seems relaxed and happy, chilling in her dressing room backstage at Latitude, waiting to soon unveil multiple new tracks from her forthcoming debut album ‘Woman On The Internet’ to a packed tent. Observing the much-missed hustle and bustle around her, she smiles calmly and sighs – “It’s so nice, isn’t it? So wholesome.” While punters are in for a treat with the return of live music, it is the sight of crew backstage that hits her most – after being pushed to retrain into other jobs, they can finally get back to what they know and love. “Just seeing it is so emotional. I cried just now; like, oh my god, live music is back.”

Fortunately, the reduction of progress to a slow crawl through virtual environments came at an opportune time for Orla, as she was already planning to take a step back to perfect her much-anticipated debut album. “Last year was always going to be a writing year for me; it’s the kind of year I would have had anyway, except with all the trimmings cut off. It gave me nothing but time to hyper-focus,” she notes. Diving deep into the nitty-gritty is something she expresses a keen fondness for: “I love poring over little details in songs… I can spend the whole day on one verse and just tweak drum sounds all day. I just love having the time to do that. I don’t think I would have had it otherwise, so that was actually a really good thing.”

This optimistic perspective did not present itself immediately, though. When a daunting task suddenly became even more formidable, Orla’s first response was to shut down. “The last thing I wanted to do was write songs. I wasn’t like, ‘get me to the studio’. I was fucking panicking.” When she rented a studio, she was granted a haven that became an important part of this record’s journey to completion. “It’s mentally so amazing to have another place to work, a degree of separation, and that obviously became an absolute godsend for life in lockdown,” she recalls.

Physical disconnect was never going to be a completely solvable problem, though. It is only back in the company of strangers that Orla can once again truly revel in her experiences. She explains: “What’s so nice about being here in person is that, until now, my whole campaign has felt so abstract because… it just feels like it’s happening off somewhere over there,” she gestures ambiguously. Never mind the sheer quantity of Zoom calls, the budding musician has had to deal with music videos, recording and mixing – just the whole shebang, really – from her little studio. Luckily, she’s been steadily building these skills over the years and was well-placed to adapt to the times. “I think a lot of artists struggled who aren’t massively self-sufficient,” she observes. “You have to wear so many hats now as an artist; even in a non-Covid world, you’re wearing long pants.” Clothing metaphors aplenty, then.

Orla finds joy in wearing these many ‘hats’, but she is adamant that it is, in fact, always her wearing them and getting across her individual stories and experiences. “I didn’t want my first album to be about anyone else,” she professes. “I’ve waited for this moment and worked towards it for so long; I just wanted to be about me.” While her songs have introspective tendencies, ‘Woman On The Internet’ is not mean to be heavy or sad – it would’ve been only too easy to come out with ten songs about being inside. “That’s exactly why I didn’t want to do that,” she grins. “I don’t want this to be the soundtrack for a sad time; I want it to be a soundtrack of life. This time. The glimpses of hope that are so special. It’s sunny and upbeat, and that was very deliberate.”

That being said, the songs, of course, do hold personal connections, and the studio room quickly became an environment of catharsis. “It definitely became ritualistic to go into that weird little room and just pour my heart out. It also became pretty maddening. So, at the end of the whole process, I had this finishing chunk where I got the band in. Everybody wanted it to be like a summer camp,” she reminisces. “We went to the country to a really fun, remote studio, slept in bunk beds, all recorded our separate parts – we even got a whiteboard with all the song parts on it!”

Devon’s Middle Farm Studios provided the perfect summer camp experience to inject the eleven tunes with some vital reinterpretation in the final stages of their construction. “I’d say 70% of the work was done going into production,” she judges, “but I needed that chaos at the end. I’m pretty good at demoing stuff now, so I just need the last bit of like madness and guidance, really – it’s hard to have that perspective on your own.”

The unique environment at this mini-Rockfield helped to instil a raucous element, and producer Peter Miles’ touch contributed too. “Pete made it such a fun experience because he’s this mad Wizard of sound. He’s got the whole place rigged up to record, so you want to do vocals in the bathroom? Let’s do vocals in the bathroom. Then let’s set the drum kit up in the kitchen. Why not? He brought the chaos I needed because, with just me in the room, I have too much control.”

The big, bad debut record is something that Orla is staying fairly calm about (“it holds less weight than it did a couple years ago, and that’s a really good thing”) as she has embraced the opportunity at a time that feels right for her. “I knew I was ready after the last EP; we did five songs, and I just wished it was longer,” she says, although she acknowledges that smaller, consistent releases may work better for some artists. “Some people will stay in EP land forever; at one point, I thought that I would too. Always a bridesmaid, never a bride… always an EP, never an LP. A lot of pieces of the puzzle take a long time to come together, like all these little islands that you have to get going. Well, you don’t have to, but I’m glad that I did.”

There are two main islands that Orla has ramped up for this release, the first being a fundamental revaluation of her perspective on songwriting. “I realise now that you don’t need to share the exact same experience as the person who’s saying something to relate to it. This year, and maybe every year, people just like to see themselves in songs. I used to think the key was to stay really and general and vague because then you don’t alienate anyone, but I found Pheobe Bridgers’ language to be so specific while also remaining conversational and accessible, and that taught me something.”

The second island is production, and this is where excess time proved useful once again; Orla found that while production is increasingly accessible, online sample archives left her originality feeling stunted. The solution? Hit everything you find and record the noise it makes to generate your own. “The search for the perfect sound is like an endless ‘how long is a piece of string?’” she exclaims. “If you confine yourself to real sounds you have, it’s a good way to focus because then you’re straight back into writing. It was practical, but also just fun.”

Orla has been hesitant to label herself as a producer in the past, but is starting to own it now. “I’ve probably struggled in the past because there aren’t a lot of girls in that space, honestly,” she admits. “I know so many female artists that are producing themselves, and they almost don’t even know that they are. If you’re recording your vocals plus harmonies, processing those vocals, adding other elements… that is production.”

Not all artists necessarily want to take on every responsibility of their work, and that’s fine too. “It’s good to own the skills that you have, but also know what someone else could do better – that delegation was important to this record. That’s what being an artist is: a perfect blend of self-sufficiency and delegating to people you trust. If you find that balance, it can be a beautiful thing.”

Taken from the September 2021 edition of Dork, out now. Orla Gartland’s debut album ‘Woman On The Internet’ is out 20th August.