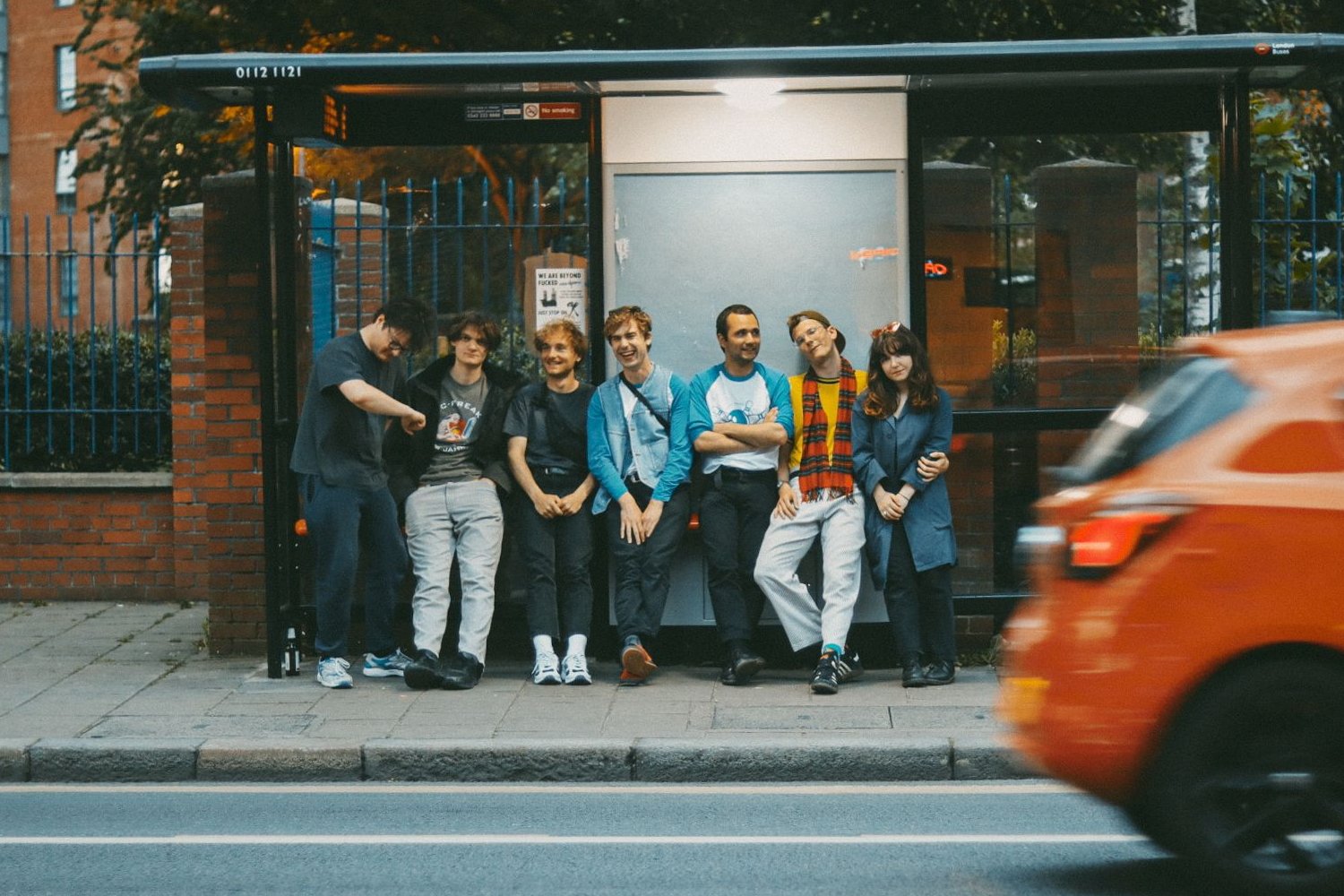 With a line-up that seems to have featured every musician in the Netherlands, and a debut album to cherish, maybe it’s time to consider a Personal Trainer after all?

Amsterdam seven-piece Personal Trainer have been building hype via an EP on buzzy label Holm Front (Walt Disco, Sports Team), and a reputation for must-see live shows featuring an ever-shifting line-up of friends. Now, it’s time for their debut album. Frontman Willem Smit – who you may recognise from Canshaker Pi – tells us more.

Hi Willem, how’s it going? What are you up to today?

I’m working on some band things today. Catching up on emails, making posters, stuff like that. I’m alright.

I’m going to have dinner in a bit with my friends Pip, Abe and Ruben, with whom I organised this festival in Amsterdam called Curly Teeth. We had a lot of great Dutch bands, as well as PVA, Home Counties, Perspex, Bull, Getdown Services and Sports Team in this big new place in Amsterdam called Markt Centraal. We had a good time, and Abe suggested that he would make us a nice meal.

I think The Lion King soundtrack, the song ‘The Company’ by my dad’s band Scram C Baby and the song ‘Op Fietse’ by Dutch band Skik. Those are early memories I have of enjoying music. I’ve been using things that I hung on the wall above the cupboard in my bedroom/living room as artwork for the singles we’ve been putting out. I picked a huge photograph of a big cruise ship by Joni Spaan that’s hung on my dad’s living room wall for the front cover of our record Big Love Blanket. I was looking for something that would make sense as artwork for our single ‘The Lazer’ and found this drawing of a band I made when I was five – hung on my dad’s wall. I must’ve wanted to be in a band, or like him when I was that age.

How did you all meet, was it from being in other bands?

We’ve met during shows – I like to watch shows here in Amsterdam and invited most people to join the band at shows, I think!

I met our bassist Ruben in school; we’ve been playing in bands together since we were 14.

We probably first met our drummer Kick when we went to see his band, Stoer, around that time.

I probably first met our guitar player Franti when she was playing with Fuz around the same time.

Our percussion player Kilian, we met when he was interviewing Rubens and my former band Paulo, The Speed Monkey.

I must’ve met our keyboard player Abel when he started playing in this band Ruben, Kilian and I are in called Steve French.

Leon, who plays guitar with us, used to play drums in my last band Canshaker Pi.

Can you remember the first song you wrote together? How has your music evolved since then?

I write the songs. Most parts are pretty much fixed, but we mess around a bit in the rehearsal space to have things make a bit more sense, as I’m a pretty sloppy songwriter.

I did record an album in 2019 with a lot of people who were in Personal Trainer at the time (and a lot of other musicians from the Netherlands) called ‘The Industry’. I wrote some very short and simple ideas for that, but the whole thing more collaborative and off-the-cuff than Personal Trainer material we work on as a band to play live.

I’m not 100% sure what the first song was I wrote for Personal Trainer, because I write in batches most of the time, and I had selected a couple of songs from my demo pile to work on with this new band. I do think ‘The Lazer’, which is on our album ‘Big Love Blanket’, was one of the first two or three.

What do you most enjoy writing songs about?

I don’t often set out to write a song about something in particular, and if I do try to, it’s either very bad, and I lose interest, or I sort of lose track of what it was supposed to be about in the first place. Most of the time, the themes or subjects kind of slip in subconsciously. I enjoy writing words when I think something is funny or has a nice rhythmic flow. Music and words can work together nicely. I enjoy that too.

Where would you like this album to take you?

I would love for us to play cool shows and festivals with bands I like.

Tell us about your 24-hour gig – where did the idea come from, and how was it to conduct? It sounds exhausting.

We were asked to do this residency at a Dutch venue called Patronaat in 2021. We could do what we wanted at this big venue. We did a brainstorming session to come up with a cool livestream idea. We had all these complicated ideas to make things more interactive, but then I thought it would be interesting to watch a band play for 24-hours straight. It seemed like a very powerful and sad thing to do. I could imagine you’d want to check in to see if they were really still going, so it would be kind of interesting enough to return to. The original venue didn’t want to go through with it, as they’d need to have people there non-stop, which would cost too much money or would be too hard to pull off or something. I was a bit obsessed with the idea, and I checked with the venue Paradiso in our hometown, Amsterdam. They wanted to do it, so we played non-stop to a huge legendary empty room for a very long time. We had prepared by working in hours. We had enough songs to fill an hour at the time, so we did roughly 24 shows. It was probably the most exhausting thing I’ve ever done, but it was fun too. ■