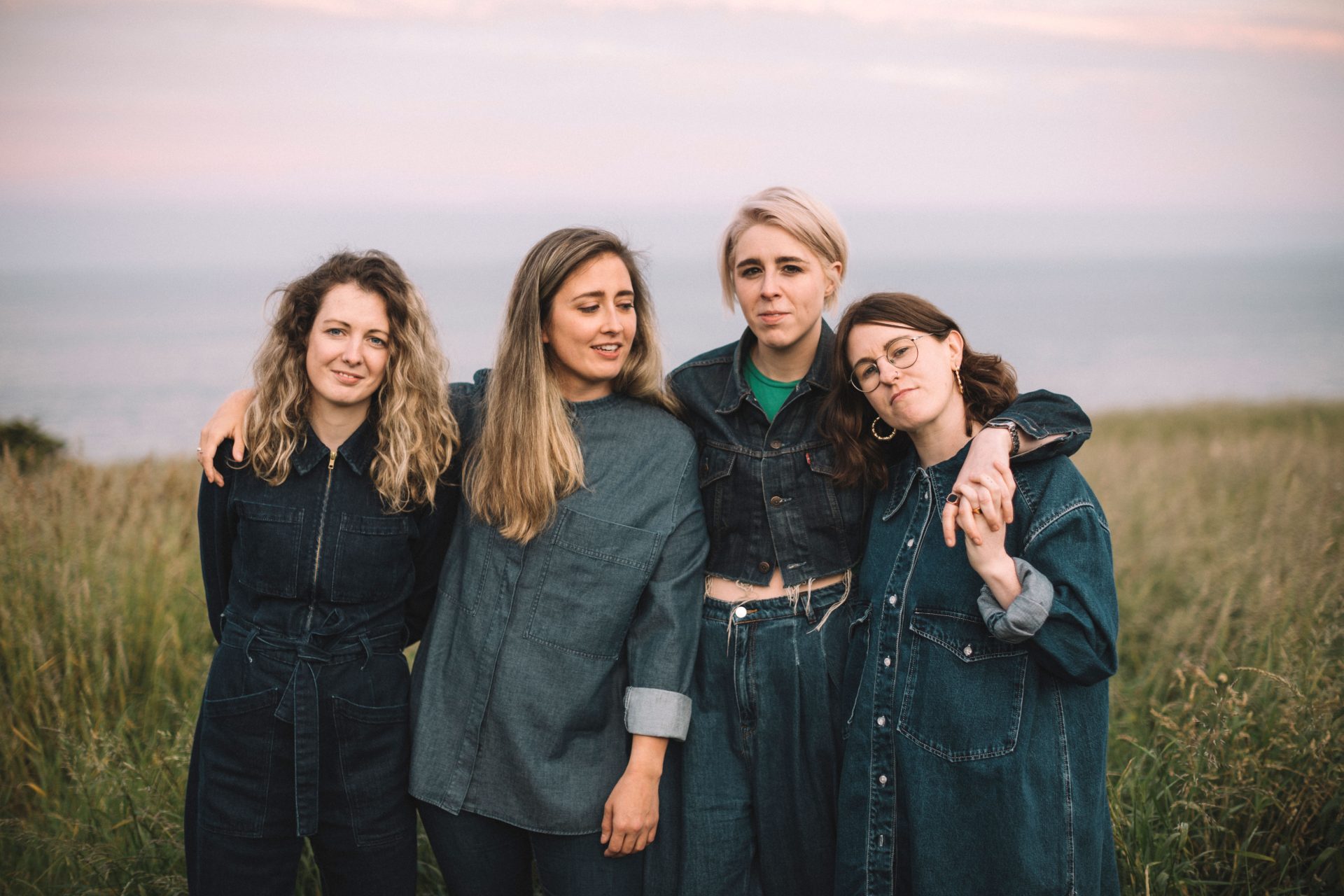 Pillow Queens: “We’ve learned to trust ourselves a bit more”

Pillow Queens’ debut album made moves in all the right ways – quietly stacking up the kind of rave plaudits that bed in firm foundations for whatever comes next. with second album ‘Leave The Light On’ now here, it’s time to cash in on all that promise.

Following a lockdown debut that had jaws dropping at an alt-indie ambition to stop you in your tracks, Pillow Queens are returning with their second record, ‘Leave The Light On’ – a documentation of four women trying to keep their heads above the water.

2020’s ‘In Waiting’ was indeed a record many had been waiting for since the band formed four years prior; it marked a major culmination of the Pillow Queens’ discography and musical exploration up to that point. As Sarah Corcoran recalls: “It was a gratifying experience because we released it right in the middle of the pandemic, and we were against all odds. We had to restart all our planning and strategy, so we were pleasantly surprised with how well received it was considering.”

Pamela Connolly admits that there was an unavoidable tension underlying the run-up to release because “we’ve existed as a band for so long and when you finally put out your debut, you always wonder: is this going to land flat? Is this ever going to be everything we want it to be?”

Fortunately, the record proved a critical home run and showed that an unsigned act still has the potential to put out one of the most exciting albums of the year. On the other hand, you don’t join a band for the post office trips.

“For the second record, we can hand some responsibility over to somebody else and have a little bit more time to play, write and just be a band, rather than a merch company,” Sarah reflects. “We have a label to do that stuff on our behalf, which allows us to do what we feel is most authentic; actually making the music.”

Speaking of the music, Pillow Queens have been heralded as a group here to push social change, but they’re more focused on simply expressing their own emotions and experiences.

“It’s a bi-product of being four queer women in a band that everything we sing about is seen as socially conscious or politically active when it’s not – it’s just our existence and how we engage with the world,” the singer-slash-guitarist explains. “We’re making music that we care about, first and foremost. We want to be a live band that people connect with on a personal level more than anything else.”

“We didn’t create a queer environment for our songs but more so for ourselves, as to not be the minority in our own band,” lead guitarist Cathy McGuinness reflects. “As long as the world can accept that and listen to the music, great.” The level of comfort enabled by this choice allows a cohesive and collaborative vulnerability.

It is undeniable that sailing forward in such a group causes unfair frictions in the world, never mind in music, and each member of Pillow Queens has had to adapt. When in a musical collective, “you can suddenly go from a person who can truly curate how people see you, particularly in terms of online presence, to being very aware of yourself,” Pam explains. “You go from being very comfortable with yourself to being thrown into a position where all eyes are on you.”

“Always aim high – if disappointed is the worst thing you can be, you’ve lost nothing”

Concerns and insecurities don’t fade with success, but, luckily for us listeners, the inspection of such turmoil has resulted in a cathartically expressive new LP, ‘Leave the Light On’.

Initially fighting to move on from protectiveness over their art, Sarah avows that the quartet have strived to find beauty in the new. “I loved [‘In Waiting’] so much and feared that we’d never have that again; how could we possibly move on? It’s been this weird, lovely growth where we’ve now made an album that I love in a totally different way.”

Each musician in Pillow Queens struggles with imposter syndrome and discomfort within their music industry experience. Still, they’ve all found their safe places – be it locked away in their rehearsal space or united as one on stage, Pillow Queens’ art grants a release from tension.

You can hear this struggle throughout the varied tones and tight sonics of ‘Leave The Light On’, although this wasn’t necessarily the intention. In fact, there seems to have been no overarching theme planned out in advance at all.

“We wrote this album over a very short period and went with moments and feelings rather than big themes,” Cathy reasons. “There are some – loneliness, love, all of these things that naturally came out – but we never sat down and actively thought what we were writing about.”

Pam chimes in: “If we did do that, we’d limit ourselves by overthinking. When making this new album, the last thing we wanted to do was overthink. We just wanted to get stuck into an environment where we could experiment, hear each other’s ideas and be our most creative.” She emphasises that hindsight has given her an appreciation of the heart they almost unknowingly spilt onto the page. “This album is unveiling itself to us day by day because it is so fresh for us. I thought I knew exactly what some songs were about at the time, but they only make sense to us now.”

Having only released two singles from the LP, there’s much yet to be unveiled to fans too. ‘Hearts & Minds’ gives a strong flavour of the intricate but strong melodies you can expect to find propped up against daunting soundscapes and embedded with heartfelt lyricism. The song alludes to growth and learning to get through tough times, which the band want to inspire others to do; pick up a guitar and use art for your own personal benefit.

Pillow Queens offer some definitive advice for those seeking to tread a similar path: “Don’t be disheartened because there’s a lot of shit, you’ll find that in any industry – you have to get through the shit before you get to the good stuff, and I mean that in all respects,” Sarah shares.

Pam encourages up and comers by requesting that they ditch any fear and take the leap they’re pining after. “Something that seems completely unachievable… why not give it a go? The worst you can do is not get it. Always aim high – if disappointed is the worst thing you can be, you’ve lost nothing.”

Facing lessons, love and loneliness, Pillow Queens are looking forward to what comes next – not in terms of even more new music (just yet), but the chance to finally revel in strings of tour dates around the globe and lap up the victory they missed on their debut. With the spring release of ‘Leave The Light On’ landing in the middle of a US excursion, there are still many roads left to travel.

“It was a very particular learning curve, putting out an album during a pandemic. The more useful learning curve is still yet to come, as we haven’t had the experiences which releasing a debut album would usually give us,” Pam looks back, with the hope of new excitement just over the horizon.

Some lessons did hit home, though, as Sarah concludes: “We’ve learned to trust ourselves a bit more because, with the first album, we thought it was a bit mad, and it might be better to stick to what we’re used to. We’ve started to trust ourselves more on [‘Leave The Light On’], and those moments ended up being highlights for us, so that’s something we’re going to keep doing.” Whatever magic the fantastic four-piece might have bottled to date, there’s plenty more to come from Pillow Queens.

Taken from the April 2022 edition of Dork, out now. Pillow Queens’ album ‘Leave The Light On’ is out now.