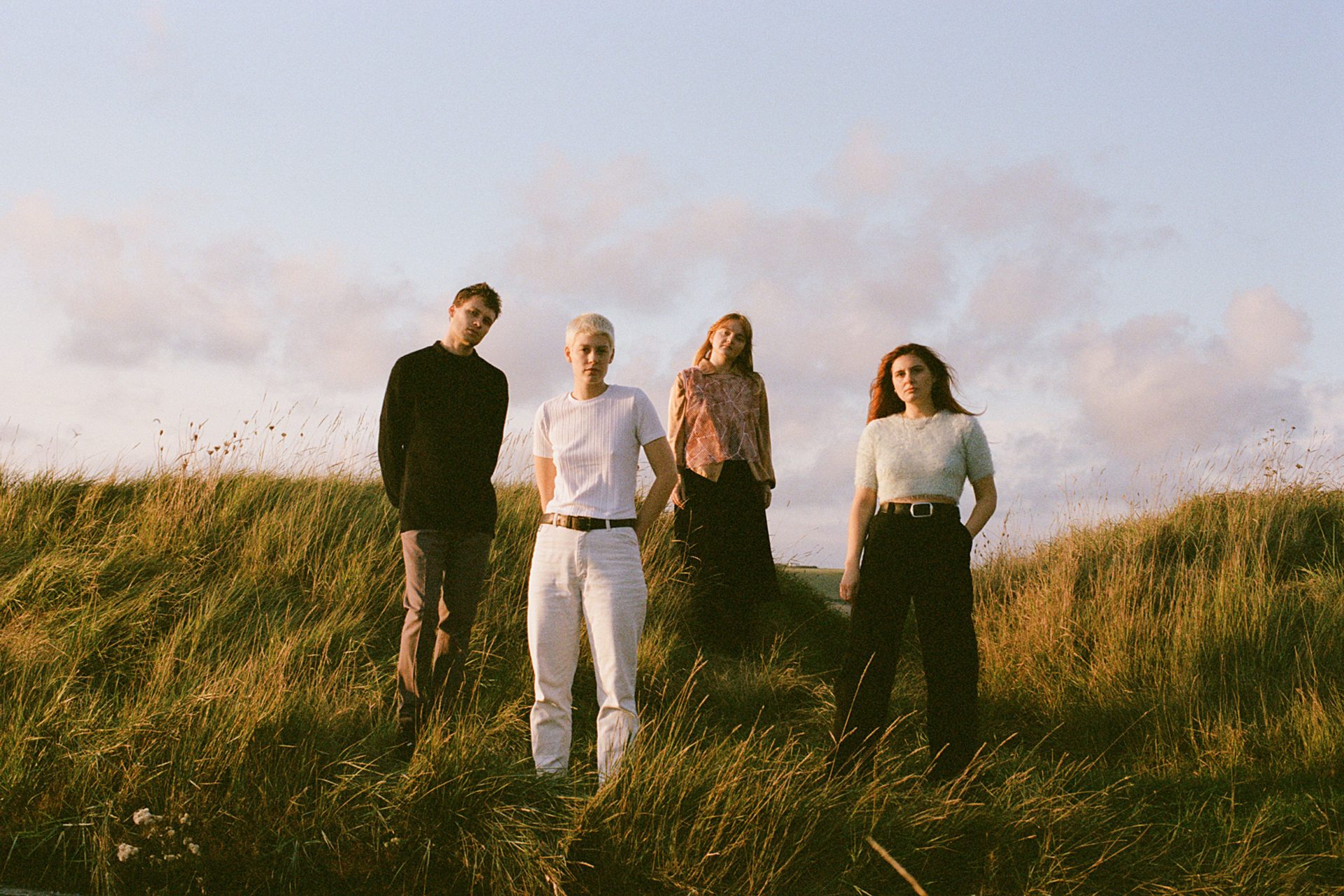 Their last album catapulted DIY darlings Porridge Radio into the stratosphere – so, where to now?

“I think this bit might be the calm before the storm,” drummer and co-producer Sam Yardley jokes as anticipation ramps up ahead of Porridge Radio’s third album, ‘Waterslide, Diving Board, Ladder to the Sky’. “I guess because we’re actually coming off the back of campaigning for the last album, which has been held at bay for the last two years.”

Despite their previous full-length ‘Every Bad’ debuting the same week as the 2020 Covid lockdown, there’s no whiff of disappointment or melancholy when recalling those days.

“It was what it was. It was a hard time, but it was alright,” vocalist, lead guitarist, and songwriter Dana Margolin explains. Their tour of ‘Every Bad’ was pushed into summer 2021 while the band was in the process of gathering their new album. Thanks to this and the ever-changing spurts of restrictions, ‘Waterslide…’ was built up through many sessions. So many that Dana and Sam spend a few minutes struggling to remember how and when they put the whole puzzle together.

“Now, finally, we have emerged in our true form”

“Some songs are at least as old as when we recorded ‘Every Bad’ back in 2018,” Sam recalls. “There are songs we’ve played and learned and then forgotten, re-learned and then demoed. There are some which have evolved over the years.”

Even through the mayhem, Dana believes it was a blessing to the recording process. “We recorded it in stints, and then we gave it some time to rest and came back to mix it. When you record, you get so deeply into the songs you forget how they sound. If you leave them for a few weeks and come back, they sound fresh.”

Fresh they certainly are. ‘Waterslide, Diving Board, Ladder to the Sky’ is not only a new injection of Porridge Radio into our collective ears, but also an enormous growth in their sound. The maturity of Dana’s lyricism and vocal expression read new levels, with a more measured approach compared to previous work. Porridge Radio still implement their no holds barred mentality, but this time with more precision and refinement.

It’s a change that’s immediately evident on the album’s first track, ‘Back to the Radio’ – an enormous ballad that swells and intensifies with the addition of horns, chorus and what feels like a million other layers. “When I was writing, I was just splurging out a song and bashing out chords on a guitar,” Dana explains. “This time, there was more intent to think about other ways to play that weren’t as heavy-handed.”

Sam says the sound was also influenced by Dana’s frequent requests for a ‘stadium epic’ sound while recording. “I kept being like, ‘Make that stadium epic!’ and Tom and Sam were like… ‘What the fuck?’” Dana recalls, laughing.

While they may achieve stadium epic status, make no mistake – this is still the same plucky band from their previous releases. “Because we had many years prior of doing it ourselves and have a very strong vision of how we want it to be, we still have the attitude of wanting to be sure we have ultimate control of what we’re making,” Sam states. “Making and creating things is the most rewarding part.”

‘Waterslide…’ is a testament to the benefit of creative ownership, with the tracklist boasting titanic pop tunes and stripped-down dirges alike. “Sometimes I wanna make a massive pop banger, and sometimes I wanna make a sad little song,” Dana says, shrugging. “You make what you make, no worries, no pressure.” Porridge Radio’s creative possession is almost authorial. Even the cover art is from a series of Dana’s paintings made during lockdown, which eventually inspired the album’s title.

While their music has gotten bigger, there’s still an undeniable sense of Porridge Radio’s unique tone in play. Sam sums it up, “We do just have our identity, so it’s still gonna sound like us.”

“It sounds more like us than ever before. Maybe the other ones sounded less like us, but now, finally, we have emerged in our true form,” Dana adds jokingly. “The next one will be even more like us until eventually, we make an album that is a glowing orb, and the orb is our souls.”

“We’ll only exist as waveforms,” Sam confirms, on board with the plan.

Two years of a pandemic has certainly not hampered the creative efforts of Porridge Radio. “It was an incredibly difficult few years, but it was also incredibly valuable,” Dana reflects on the time since ‘Every Bad’ was released. “It was very lucky that we had some time to just stop.”

Since it looks like nothing can stop the wheels from turning on this album, the band are excited to play live but are taking steps to ensure they look after themselves on their upcoming tour with plenty of rest, support and good food. “It would be nice to get to the end of a tour without having to collapse for weeks,” Dana chuckles while Sam nods knowingly.

‘Waterslide, Diving Board, Ladder to the Sky’ is not only a monolithic, emotional outpouring; it’s a pure expression of Porridge Radio in their current form. Just one of the many exciting steps in their journey to become glowing orbs. It’s nice to have goals, eh? ■

Taken from the June 2022 edition of Dork, out now. Porridge Radio’s album ‘Waterslide, Diving Board, Ladder to the Sky’ is out 20th May.