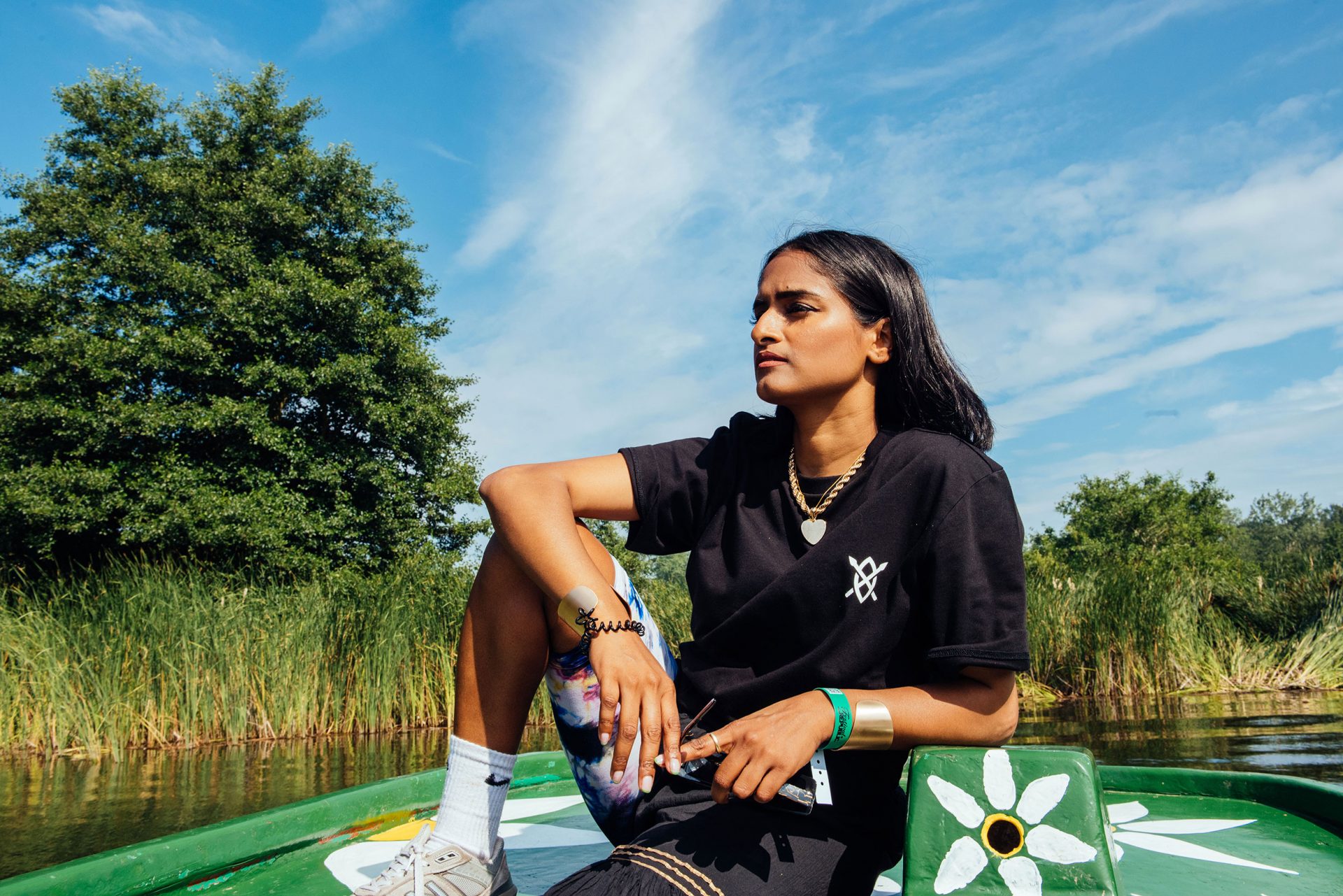 Priya Ragu: “I did my work. You know? I’m gonna just trust the universe”

Priya Ragu is introducing a fresh take on R&B that’s entirely her own.

Promising Swiss-Tamil performer Priya Ragu has dazzled audiences with her unifying and empowering tunes that redefine pop and merge a diverse array of influences into a fresh new sound – with a debut mixtape on the way, can she win the hearts of British crowds?

With her first UK live show under her belt, the already resounding answer is: yes, most definitely. Latitude provides the perfect opportunity for Priya to flex her musical muscles, and she clearly laps up the much-needed feeling of connection. “We had such a good time! 30 minutes felt like maybe 10?” she celebrates.

Indian percussion, guitar and keys flesh out a broad stage presence alongside Priya’s brother, Japhna Gold. “That experience actually makes it even crazier,” she notes. “My brother produces and is also in the band on bass and vocals. It just creates another level of energy on the stage. His ad-libs create a different dynamic to it.”

The road to this point has not been an easy or simple one for the artist. Her uplifting R&B has been a project kept behind closed doors for a long time while musical ambition took a backseat to career progression. Playing open mic nights alongside working as a technical purchaser, Priya worked hard at sculpting her direction into something hard-hitting; something both joyous and reflective.

“It’s been such a crazy journey so far. I mean, I just signed during a pandemic,” she laughs. “Now I’m in this momentum, and things keep happening – things that I never expected to happen. I needed some time to really grasp it.”

A collaboration with electronic duo Jungle on their third studio album is perhaps one of these striking moments for the singer-songwriter who was already a big fan. “’Casio’ was already on replay all day long. I was told ‘Josh from Jungle wants to get into the studio with you’, and I was super nervous,” she shares. “We were not planning to work on his album or mine. He was just like, come on in, let’s jam. And we did end up with a couple of songs coming out of it, so that was amazing.”

This experience has served as a moment of international validation for an artist that wasn’t sure she would be able to draw in Western audiences. With Tamil heritage, a Swiss upbringing and global aspirations, trying to please all parts of herself was a ride of internal division that has only recently felt somewhat resolved. Battling expectations from those around her – including her parents – was the first step down the path to mental freedom. “I had to fulfil my parent’s expectations, and then also society’s expectations. I felt like I had to meet everyone at a certain level, but at the same time, I had to do what I wanted to do. I finally got here; it just took me a long time.”

Flourishing through the mystery of the pandemic has enabled this growth to be cemented; Priya draws on her background to annihilate expectations, allowing her to dive fully into the pursuit of this project. “I was at the point in my life where I had to decide what I really wanted to do. Music was always in the background for me – it was just a side thing, a hobby,” she recalls. “But then, eventually, the voice inside got louder and louder… I just had to listen.”

Chasing this feeling has now obviously made a big impact on both Priya and Japhna’s lives, but the effects span further than just altering some day-to-day activities. “I was also on a spiritual journey when I decided to start creating music; my spirituality and music have evolved together,” she professes. This culminated in a songwriting expedition to New York, an exploration of her independence and identity. As she explains: “I wrote down three pages every day about anything going through my mind. I was trying to figure out what I like, what I don’t like, what I want to do, who I want to be, where I come from, where I’m going… all this big stuff, you know?”

After a fundamental and comprehensive reassessment of self, Priya feels ready to step forward with a strong notion of who she is, what she’s about, and the empowering message she wants to thrust into listeners hands; an informed message of self-belief and opportunity. “The universe tries to give you a sign, whether it’s through people, your inner voice, things that happen… you just have to realise it, grasp it and trust it blindly,” she advises. “Trust in yourself and in your talent.”

While some successes may appear to occur overnight – and, of course, sometimes they do – prospective artists must first place emphasis on development away from the limelight. As Priya divulges, “you have to take that time to explore your talent; sometimes you don’t know what you’re capable of. I found it important, out of respect to my talent, to give it a space, time and a place to evolve.”

Upcoming mixtape ‘damnshestamil’ is the proud result of this period of blossoming maturity; a genre-bending cauldron of sounds defining her own fluidity, the 10-track ‘Raguwavy’ release explores bright environments, lush and vibrant soundscapes, all with a pure heart that transcends the literal and metaphoric cultures that Priya aims to unite. “I’ve got to stay true to myself and create authentic music, and then the more it connects with people, the better, the more fulfilling it will be for me,” she rationalises.

There are some specific impressions she’d love to make with this first foray into expanded releases too. “There are a couple of different messages here,” she begins. “One is to follow your own instincts and don’t let society bring you down. Know that it’s okay to break out of a certain circle and do what you want to do.”

“The second thing is: family values are very important,” she adds – with her brother producing and playing alongside her, this blood connection is vital to Priya’s art but also heart. “For me, family is everything; more than success or even music. Family comes first, and you can hear that in my songs. There’s even one song that my parents wrote on this mixtape,” she reveals – bonus track ‘Santhosam’ is a true passion project that proves these messages are not simply ambiguous claims but beliefs driving this entire mixtape and project.

Despite the mixed origins of these sounds and themes, the overall delivery hits universally. “It’s something super familiar,” she agrees. “It’s something that you know, but then suddenly it takes you somewhere else. I hope to evoke some curiosity within you.”

2021 truly seems to be an era of change, and is the perfect year for such a unique piece of art. Inspiration happened to strike at the right time and, as she acknowledges, “it’s also the right time to release music like this. I feel that people are more open to new sounds, new languages, something that’s maybe unfamiliar. And I feel like, yeah, it’s always nice if we can keep evolving as human beings.”

Now the intangible and enigmatic ‘damnshestamil’ is finalised and ready to go, Priya is content and ready to get whirring up some new beats. “I did my work. You know? I’m gonna just trust the universe, and it will spread out to the right people,” she concludes, basking not in the attention of listeners but the appreciation of those closest to her. “At the end of the day, if you’re successful and you want to share that with somebody, who else would you want to share it with more than your family?”

Taken from the September 2021 edition of Dork, out now. Priya Ragu’s debut mixtape ‘damnshestamil’ is out 3rd September.