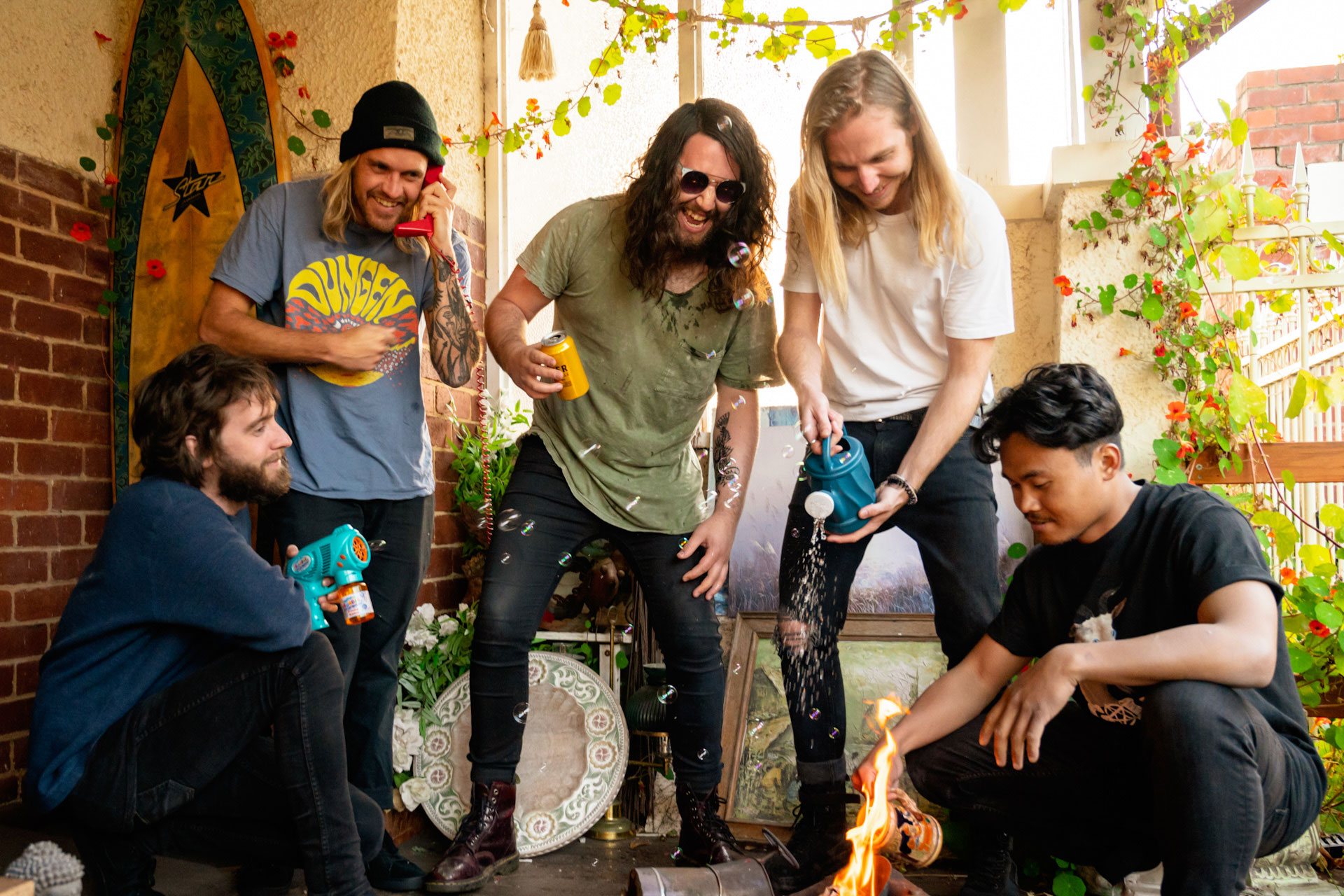 It’s been over a year and a half since the psych-rock outfit released their last record, ‘And Now For The Whatchamacallit’. In the time since then, they’ve toured the world, played the festivals of their dreams, and whiled away lockdown with frequent visits to their local bottle shop. “We’ve been given a sniff of the great life, and now we’re back into our days of playing golf and getting sunburned,” Jack laughs. “We don’t know what’s going on.”

They might claim not to have much of a clue, but their music tells a different story. Hitting play on ‘SHYGA! The Sunlight Mound’ is like taking a step inside a world of the band’s own making. Vivid and vibrant – or as they describe it, “colourful, convoluted, seventies nonsense” – this is the sound of a band at the top of their game. Their time at home – to relax, refresh, and reinvigorate their creativity – while unplanned, has served them well.

“It’s almost like being able to get a little bit of my life back in order, which is kind of weird,” Jack reflects. “I’m like, ‘oh right, I have all my friends and family here.’” Having spent so much time on the road, bringing their psych-drenched sound to life for audiences everywhere from Melbourne to Manchester, putting on a raucous live show became a part of the band’s character. Not being able to hit the road and tour might have started off feeling like a detriment, but the space and time to create whatever and however they wish has been a value they never expected. “I think when it all starts going back to normal, and they’re like, ‘alright, now you’ve got to go off for another six months’, I’m going to be like a kid that doesn’t want to go to school,” Jack laughs.

“There have been so many negatives, but I think the positive – at least, for creatives – is that everyone is at home, working on their magnum opus,” he continues. That could be anything from writing the book you always knew you had it in you to write, making the album you never knew you had it in you to make, or even finishing the world’s biggest puzzle (like the friend Jack had dinner with a few days prior to this conversation). It might be a cliché that hard times breed great creativity, but clichés are cliché for a reason. “It’ll be like a new renaissance of style,” Jack proclaims.

“It was originally supposed to be a metal record”

For Psychedelic Porn Crumpets, they’ve spent the past year hard at work on their fourth album. The strikingly titled ‘SHYGA! The Sunlight Mound’ is a dynamic wonderland every bit as sun-kissed as its title suggests. But that’s not how it started out. “It was originally supposed to be a metal record,” Jack grins. Initially inspired by the likes of Slipknot and System Of A Down, the album the group created ended up being more influenced by the likes of T. Rex and ELO. “If they were trying to be ambitious now, what would they do if they were just recording in a bedroom?” Jack questions.

Written at a time when there were very few places to go other than the local bottle shop, ‘SHYGA!…’ is a record inspired by booze, buzz, and boredom. “It’s an album about alcohol,” Jack describes. Unable to venture out around the world to make new memories, the record also takes heavy influence from the feeling of nostalgia. “All the lyrics have this really strong theme of being almost in a stalemate with the world,” Jack portrays. “I feel like it came together at the end to be almost like a Marc Bolan esque, Rocky Horror Picture Show kind of style of writing.”

As for what the title means, well, that’s left for you to decide. “That, for me, is the intriguing part,” Jack expresses of album and song names. “If you pick up a CD, you turn it around, and on the back, it lists, ‘Love Again’, ‘First Love’, ‘Second Love’. You’re like, ‘aw man, where is this guy going?’” he laughs. Turning a CD around to titles like ‘Tripolasaur’, ‘Hats Off To Green Bins’, and ‘Mango Terrarium’, what lies behind those names all but literally echoes out for exploration. “I feel like it adds to the character of the band or the style of what is going on in a way that sometimes chords or music can’t,” he adds. “If music is visual, what does that sound like?” Well, dear readers, you’ll have to listen to the record to find out.

“It was probably the first time since the first record I’ve actually felt like I’ve managed to write a whole album and be happy with it,” Jack enthuses. “I’ve signed off. Here it is.” Such a confident statement can only spell good things. Cinematic in scope and texture, this is music to immerse all the senses. “That, for me, feels like the best way to get to know the headspace of the people or person writing it,” he comments of the album format. “That’s their chance to almost create a score or a picture or movie.” What would the Psychedelic Porn Crumpets movie look like? “You’d have to learn to do cinema 4D and everything,” he laughs.

The band are about to release their fourth record, but just because they’ve been through these motions before doesn’t mean they don’t feel the nerves. “It’s something that will never not feel personal,” Jack earnestly expresses. “Because we’re just doing this in our bedrooms, something that I might not even show anyone then gets put on this record that’s shown to everyone in one moment,” he marvels. “Then you get asked questions on it!” It seems daunting, for sure, but that’s also where music finds its magic. “It’s this strange feeling of including yourself in someone else’s life, without you even realising that’s what you’re doing,” Jack portrays. “That’s our escapism.”

Touring the wider world might be off the cards for now, so the group are already back to doing what they do best: making music. “I’m straight into the next one,” Jack enthuses. Picking back up where the heavy metal influences for their new record were waylaid, what the band create next looks like it could see them turning everything up to eleven. “You feel so calm after listening to the heaviest song ever,” Jack conveys. “Whereas sometimes I listen to Belle and Sebastian and want to beat people up. It’s weird.” Whatever direction Psychedelic Porn Crumpets take, you can be sure it’ll be quite unlike anything else we’ve heard from them before. “We’re keeping writing music,” Jack asserts. “We’ll always be writing music.” And if that isn’t something we can’t get on board with, then we don’t know what is.