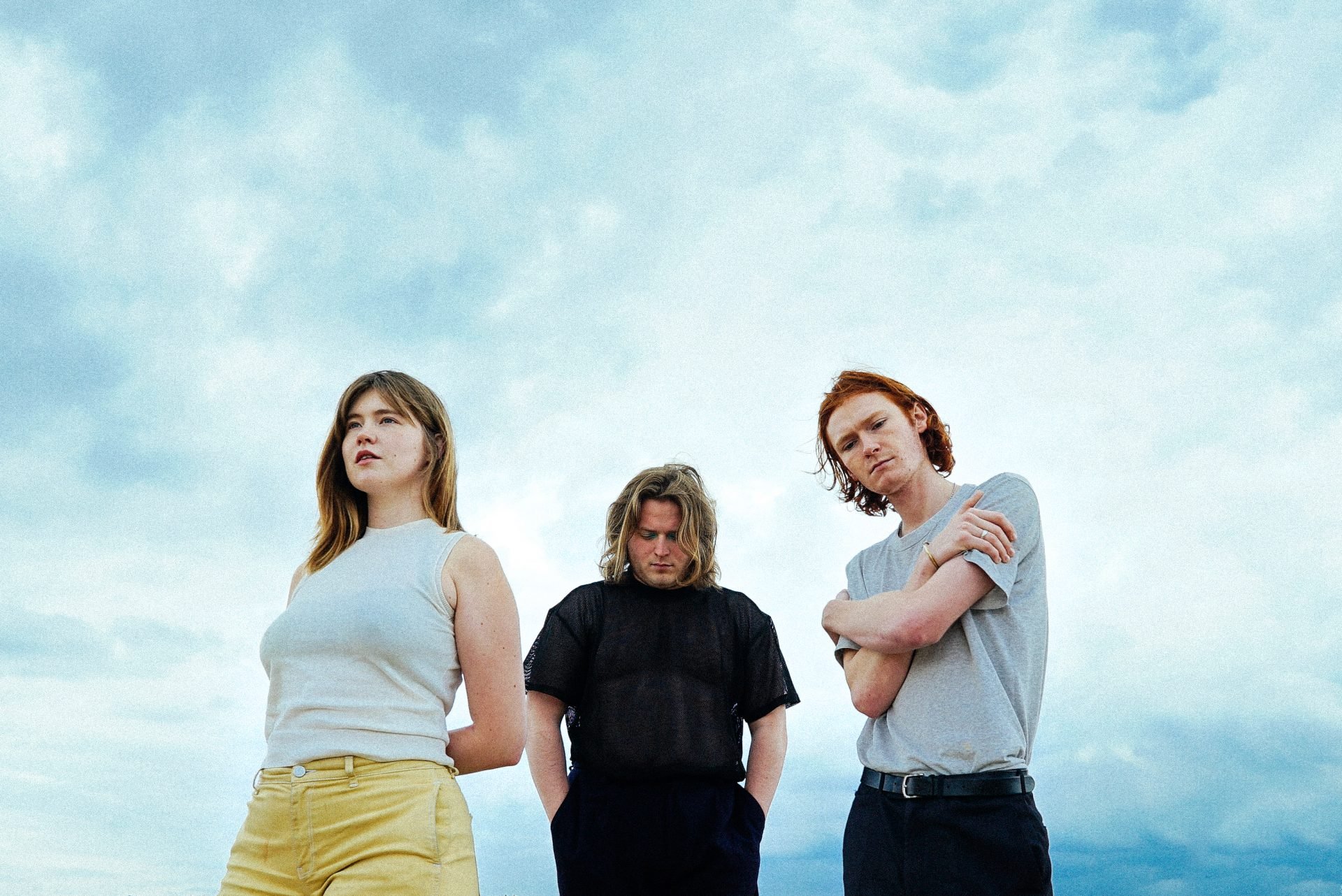 PVA: “We’re on a crazy joyride into chaos”

Ella Harris, Josh Baxter and Louis Satchell have been seeking sonic thrills since they came together to form PVA just a few years ago. In a short space of time, they have accumulated an audience of live music fanatics, released a bold EP and even had one of their remixes nominated for a Grammy. The trio’s sights are now firmly on the horizon, though, as they look towards their imminent debut album, ‘BLUSH’.

Although the record, and indeed much of their discography, boasts an intimidating darkness, the softly-spoken outfit don’t always reside within such a storm. In fact, Ella and Josh’s bond developed over a series of parties in London; singing karaoke to Mariah Carey sounds somewhat out of character, but this underlying pursuit of joy is subtly embodied within their musical output as well.

“We find catharsis in the darker moments, and we all really enjoy those textures and sounds in a way that’s ultimately leading us towards a lightness,” Ella shares. “We enjoy the moments of tension because that then builds up to a great release. If the record was all dark tones, it would be a very different project. We enjoy playing with textures at the appropriate time to signify moments of catharsis, joy, and complex emotions.”

The liberation she speaks of comes easily with a palette of such monumental sounds; each soundscape on ‘BUSH’ is painted with multiple brushes, and each one leaves a thick and hefty trace for fans to follow. Drawing from the tones of more than one genre, PVA focus on the evocative feel within each song and push these to their limits to maximise the emotional response attainable through an art as elusive as music.

“Catharsis is a big part of both electronic music and the darker side of post-punk, and we play on both those textures in our music – I know Working Men’s Club do that as well,” Ella continues. “That’s a really big part of our styles of music; it’s not only moments of building up the songs, but moments of release, moments of cluttering build-up, and moments where it all crashes down again. These moments affect how people interact with their emotions when they experience them live, whether it be through a moshpit or just with their hands up on a dance floor. Both of those styles are incredibly emotive.”

“They’re both so connected to live performance,” Josh adds. “Since their beginnings, electronic and dance has always been something that people gather en masse to listen to together. It’s the same with post-punk, writhing around in small bars and clubs. Both of them have such a strong connection with being amongst lots of other people and using the music to express both stresses and the joys of letting them go.”

As such, the London-based group have established a reputable name for themselves across the local live circuit. Having recently gone from the sweaty pits of the big city to the bright sunshine of festival slots, it is on the road alongside peers like Shame and Dry Cleaning that the three musicians learnt what it takes to cater to your audience.

“We find catharsis in the darker moments”

“We all found the Shame and Dry Cleaning tours really interesting. They taught us a lot about how our music comes off in different environments and how we can refine the live show further, so it is more accessible,” Ella reflects. “Dry Cleaning are a really cool band. They’re great at harnessing simplicity and putting on powerful performances just through drums, guitar, bass and Florence’s vocals.” Josh admires the energy of Shame’s Charlie Steen, a frontman who takes things in a more physical direction. “Watching Shame every night, they just give it every time,” he enthuses. “They’re so energetic. It’s interesting to see people perform in that way.”

With a crowd that’s as diverse as PVA’s influences, it’s not always easy to tell where or when people jump on board. That’s something that Ella enjoys. “We did a show at Corsica in London this summer. We sold out a headline and played the album for the first time,” she recalls. “It was so fun and sweaty in such a small club space, and just looking around the crowd, it felt very diverse. There were lots of different ages and just very different people – I wonder how we managed to pick them up along the way. We’re on a crazy joyride into chaos. Where did we find you?”

The band lean into electronic, punk, pop and everything in between, but the deep and rich weight of the harder tracks seems to be fuelling the most unsated appetites as of late. Still somewhat emerging from their lockdown-induced paralysis, this is something they are not too surprised by. That period prevented some ambitions for delivering a big and bold experience around their 2020 EP ‘Toner’, specifically in the form of a shelved VR project, but the desire to shape up an integrated and expansive body of work has merely continued into the campaign surrounding ‘BLUSH’, much to its benefit.

“We really wanted to create a cohesive visual and sonic identity for the album, and it took us a good year of thinking about it and six months of building it to get there,” Ella describes. “We wanted it to sound like a true statement of intent for PVA; a holistic introduction that includes all our personalities. With the visuals, we wanted something futuristic, unique, bold and colourful to reflect how we wanted the music to come off. The cover image shows a person caught between two places – pulled in one direction, but drawn towards another. That’s where the record sits for us thematically as well, in the movement between two states.”

That mentally torn sensibility was an obvious position to reach for following a period of anxiety for the band, and that feeling permeates through the entire tracklist. As Ella elaborates, “a lot of these songs are projections of feeling that are quite universal. We tried to create characters experiencing that and allow them to live within a song. The process of making a debut album is anxiety-inducing in itself; it’s an introduction for a lot of people. The first time they hear your music and get to know you, so we wanted it to feel honest. We wanted the stories and characters to be as close to our experiences as possible, and that turmoil carries across the album.”

Twisting an excess of time into hard-laboured songwriting getaways, the trio discovered their own complementary niche skills and watched each other grow at a rapid pace with a concentrated block of weeks away from their relentless touring. “Louis is amazing at arrangements, and his musicality is really strong. Josh is this incredible producer with a real ear for textures and where particular sounds sit, and I really enjoy writing lyrics and stories,” she continues. “We all take turns to offer up our own skillsets. Sometimes you’ve just got to give people space to work on what they’re good at; let someone do their thing and watch in awe.”

Even for Ella, Josh and Louis, ‘BLUSH’ is not the product they expected to form when they first discovered the intersection between live bands and late-night DJs, but the balance is mesmerising. This stable equilibrium between the light and dark, intimate and industrial, muscular and fragile, is what defines PVA’s immersive statement of intent.

Unifying opposing forces within their sound, the album promises to be just “a small taster of what to come” – the challenge of shaping up a cohesive project is one that has become addictive. “This is the first time we’ve felt as a band,” Ella concludes, “and it’s a really special thing for us.” ■

Taken from the November 2022 edition of Dork. PVA’s album ‘BLUSH’ is out now.