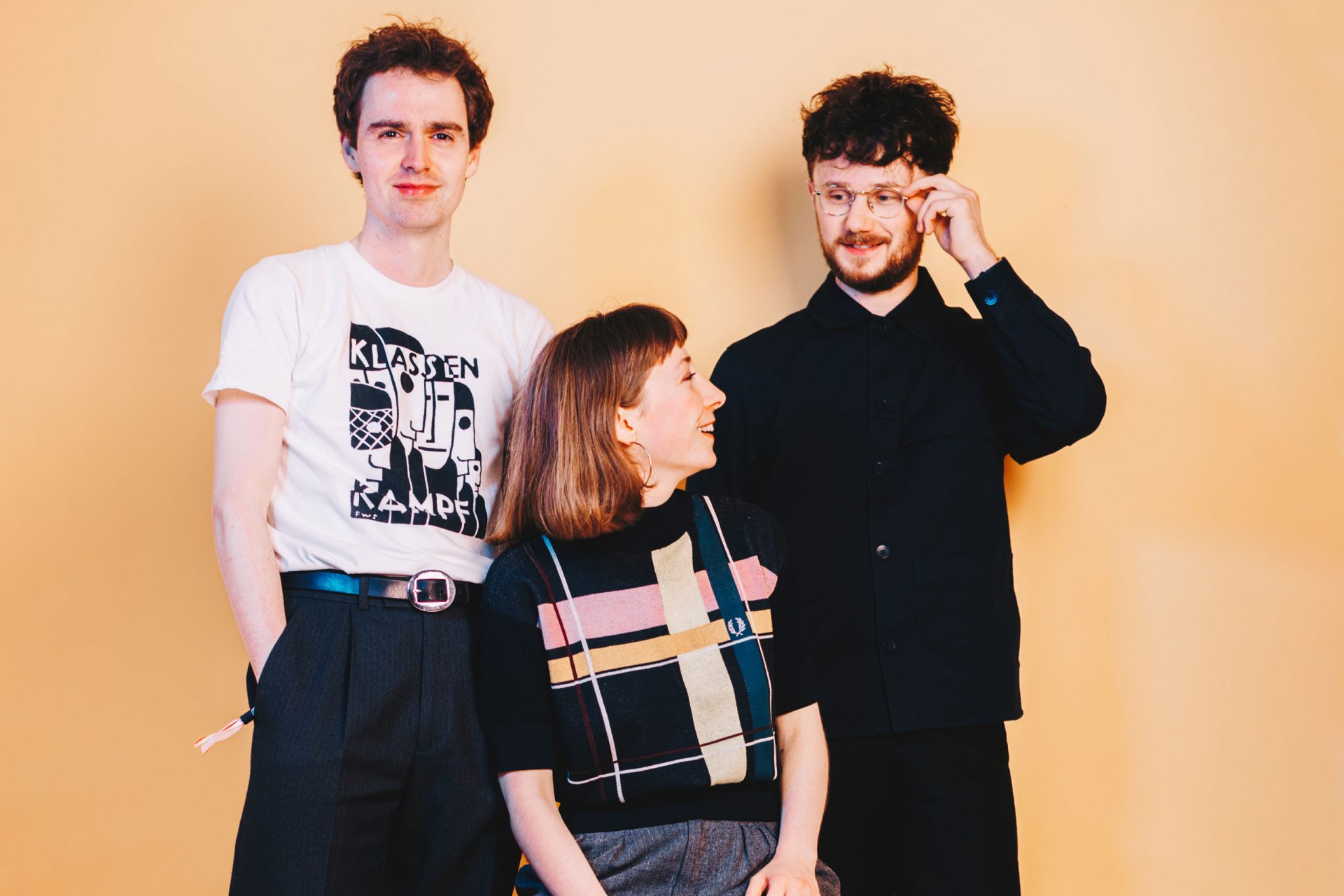 Regressive Left: “This is the time that we really go for it”

Luton trio Regressive Left sound more like they were made for the cool kids of Brooklyn. After paying their dues in indie bands that never quite sparked, this time round they’re ready to grab opportunity with both hands.

Luton. Not quite New York City, is it? And yet if we’re going to start throwing comparisons around in the vicinity of Regressive Left, they’re going to get awfully Brooklyn, awfully quickly. One listen to EP standout ‘Bad Faith’ will have even the most restrained reaching for those DFA parallels. Sharp, sardonic dance-punk, James Murphy would be proud. That’s more than enough to get our attention. In amongst the herdy and gerdy of this year’s Great Escape, we caught up with Simon, Georgia and Will to find out more.

How are things with you guys at the moment? Do you get that sense that stuff is happening?

Simon Tyrie (lead singer): Everything’s going as planned. There are no unexpected twists and turns. It’s like, yeah, the plot is continuing.

You’ve probably been playing live a lot more often over the past few months, doing festivals etc. What’s that been like?

Georgia Hardy (drummer): We started in the pandemic, so we released our first track, and we didn’t actually get to play a live show for about six or seven months after that. Which was nice in a different way. It was actually quite nice not having to do that kind of slog of shows. But I think now definitely, the songs have grown a lot more. Playing them live, we’re now to the point where it feels like a proper unit. Kind of developed.

Simon: It was stop-start for a long time by lockdown. How many shows did you say we’ve done now?

Will Crosby (guitars): As of today [for The Great Escape], we’ve done 28 gigs.

Simon: Actually, I would have thought we’d done more.

Georgia: A good moment for us was the tour with Bodega because they’re such an insane, dedicated live act. They played for like an hour 40 every night, and they did like 50 dates. They had one break the whole tour. Doing those shows with them, it felt like we were seeing a proper band. It was really inspiring.

When you started putting stuff out, did you have an idea of what you wanted to do as a band?

Georgia: Not at all, really.

Will: We didn’t really intend to put anything out there. Our friend told us to put a song out there that we’d sent him, and begrudgingly we did.

Georgia: Us three had been playing together for a long time, just mainly for fun. We never released anything. And then, I think the pandemic was a moment where we were like, why are we sitting in on all this recorded music and never just releasing it? We were always like, oh we can do better. The pandemic made us realise that time isn’t finite, so we were like, fuck it let’s just put this song up. We didn’t expect it to do anything, and it gained momentum. Our first live show ended up being at Latitude, and it was a bit like, ok fuck – now we’ve got to actually play.

How did you guys first meet? Were you playing in other bands before?

Georgia: We’re all from Bedfordshire – me and Simon grew up in Luton, so we’ve known each other since we were teenagers. Then we met Will playing in different local bands as teenagers. Since then, we’ve played in a few different projects together. We had a bassist originally, and they left and then we were like, what are we going to do now? That’s when we brought in the electronics, to replace the bass. That’s really how this music came about.

Simon: Which is also why it’s based on loops; when we get compared to people like Devo – it’s that repetitive mood-based stuff. That was more of a necessity because we didn’t want a bassist.

What were you doing before?

Simon: A couple of years before the pandemic, we were all going to see a lot of the new jazz stuff. We were DJing the 80s night at MOTH Club. It was a combination of what we were seeing at the time, and what we were DJing.

Was there a moment when you clicked as a band?

Will: We had a song called ‘Prospects’. It was the first thing we ever wrote, and we were like, oh we can write a song as a three, and it sounds good, and it sounds like a new thing. That was our patient zero song.

Georgia: We don’t play it in our set now, and we haven’t released it because that song was actually really hard. It was the first time we were really trying to push ourselves in terms of technicality and what we can do. It was a moment where it clicked, but also, we weren’t that good at it yet. It was the moment where we knew what we wanted to achieve.

And now people are interested and listening to the tracks, how has that been? Is that weird? Has the reaction been a surprise?

Will: I’m always surprised when people care about the things I do, just in general. Surprised and very grateful when people give a shit, or appear to give a shit.

Simon: One thing that sets this project apart from our others is when I’ve done other things in the past, I’ve not really listened back to it. With this stuff, we always feel like we’ve done a good job. We’ve never really been that bothered by the reactions because we’re happy with ourselves. It makes a big difference. In other projects, you get so fixated on what people think because you’re not really that happy with yourself.

Will: I always thought it was pretty uncool to listen to your own stuff, but I genuinely quite enjoy the way our music sounds.

Georgia: Because we weren’t releasing any music or playing any gigs, we were purely making the music for fun and for ourselves, and I think that was a massive difference.

Will: There wasn’t the pressure to just get a song that goes from A to B, that you can play live. We actually sat down, crafted a bunch of songs and a sound. We couldn’t play shows, so we just had a room to sit in, and we could actually listen to stuff back and work on it.

And your debut EP is coming out as well?

Georgia: We started writing an album before we wrote the EP. We had most of an album done, and then the songs on the EP we wrote after when we were starting to play live. Those newer songs we wrote felt like a moment. It felt fun, basically. We wanted the introduction to be fun and attention-grabbing, not that serious.

Will: The three tracks that we released previously were the sound of us in lockdown, of us meeting up between lockdowns to record stuff that we’d written, sending files back and forth. Whereas the EP is the way we sound having gigged the songs for six months, and written songs alongside gigging, and with the knowledge of what our sound is.

Was it hard to translate your lockdown songs to live, or has performing been an easy thing for you to step into?

Simon: It was easier than we thought it would be.

Will: We’ve all performed a lot before, and we’re used to playing with each other for the various projects we’ve been in. We spent a lot of time learning songs and understanding how we played them live. I felt quite relieved and happy; I didn’t find it stressful – I’d been cooped up for too long, and it was a really good release. You get to understand your songs all over again.

Ambition is a big word, but do you have things you want to do?

Georgia: We never released music in our other projects because I think we knew they weren’t good enough; the songs weren’t good enough. I think with this, we were done with making music for the sake of it. If we were to do this project, this had to be it. This is the time that we really go for it and try to make a real success of it. When we’ve written these songs, for the first time, we do feel confident in releasing them and that they will connect with people because I feel a connection when I listen to them and when I’m playing them.

Simon: The key thing is we’re happy with this, so it doesn’t really matter. If we end up being one of those bands that gets rediscovered in 20 years – like, what happened to that band? – that’s fine.  ■

Taken from the July 2022 edition of Dork, out now. Regressive Left’s debut EP ‘On The Wrong Side Of History’ is out 15th July.