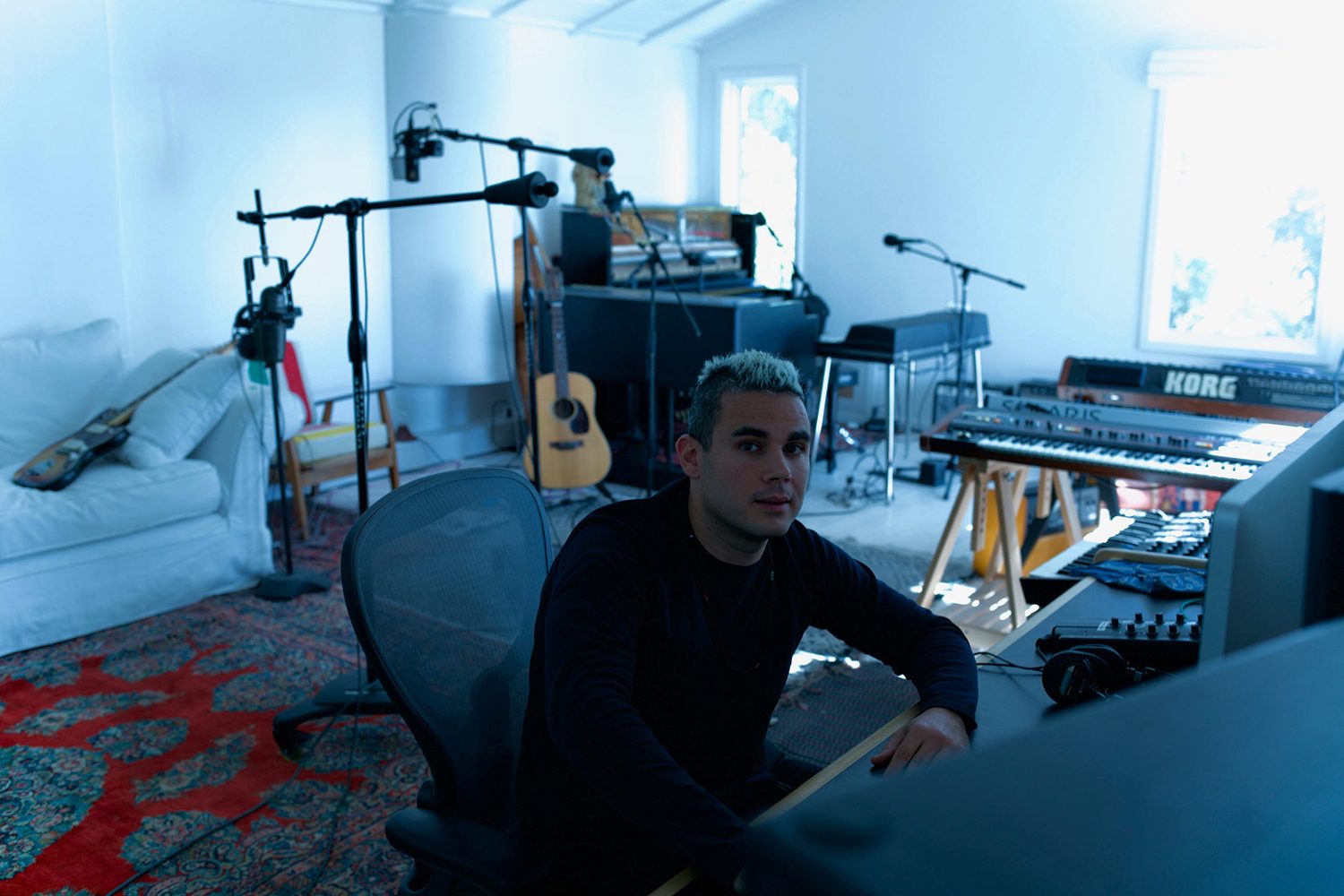 Rostam in the studio: “It feels like the beginning of a new era”

Well, kind of. He’s stepping out of his comfort zone to reference more bebop on his upcoming second solo album and the follow up to 2017’s ‘Half Light’. That’s proper music talk, but rest assured, it’s just a bit saxier than what we’re used to.

And it’s not the pop kind of sax we hear on, say, The 1975’s albums either, it’s the more unconventional, classic kind. We’ve heard bits of it on Haim’s ‘Women in Music Pt. III’ – a record entirely produced by Rostam alongside Ariel Rechtshaid – especially on ‘Summer Girl’, and there’s heaps of it on this album’s first offering ‘Unfold You’.

“I feel like some people I’ve seen have felt the song was very sexual, which I think is good. But I think for other people, maybe it doesn’t strike them that way,” he says of the song’s reception. The track is a delicate, finger-clicking number with, of course, a major saxophone line running throughout, and a little taster of what’s to come hopefully in the first half of 2021.

Rostam meets us live from his self-built studio in Los Angeles, which today, he notes is particularly lived in (although his assistant usually cleans it up and, get this, vacuums the couches for him) because he’s been hard at work finishing up his next solo record.

“I mean, it’s not supposed to be finished at any time. I guess it’s supposed to be finished when I’m happy with it, which is definitely what I believe. I think there are probably people who can work on something forever and there are people who maybe should work on things a little longer than they let themselves and I’m more in the camp of I could work on it forever.”

He’s been working on the record for some time now, and basically been in the studio all of lockdown, save for a trip to Massachusetts in July. It’s a trip that he takes every summer, and this time was a well-deserved break after polishing off two records – Clairo’s ‘Immunity’ and Haim’s latest – and buckling down with his own.

“I was even going so far as like, I was using Pro Tools as I was packing up to go get into the car to get to the airport. And I was like, trying to bring all my stuff that I would need to work on music while I was by the beach. And then I got to the beach. And I was like, oh I’m not doing this. I’m not doing music. So it was great to just take a break from everything for three weeks.

“And at the very end of the trip, I decided to make a music video, which was the video that came out for the song ‘Unfold You’, and that was made the last three days on the beach. When I came back, I basically had an album to finish, and I knew exactly what I needed to do, it’s been fun since then.”

This upcoming album has also been a chance for Rostam to break out of the sound he’s become known for in the past decade or so. Between his work as part of Vampire Weekend and his involvement in albums for Haim, Clairo, Charli XCX, Carly Rae Jepsen, Maggie Rogers and more, there’s a thread that runs through his production discography which is loosening up a little.

“I enjoy getting lost, and not exactly knowing what the record is, and kind of finding it and finding myself. I think, with this album, I wanted to make a change. Aesthetically, I look back on so much of the music that I’d made from the time I was 22, when I produced the first Vampire Weekend album, that was the beginning of my career as a musician and my career as a producer, and I felt like so much of that music was connected in different ways. Classical music for me was one of the things that connected all these different kinds of music and songs that I was making, and I decided I wanted to make a conscious effort not to lean on classical music as the touchstone. So like this record that I’m finishing now, it feels like the beginning of a new era.”

So he’s moving on from classical to jazz, and starting with arguably one of the best instruments of all time: the saxophone. Like he’s mentioned before, he’s not creating his own ‘Careless Whisper’, but he’s definitely showing off a sexier side, and a saxier side.

At this point, we ask Rostam for his top three saxophone solos, sadly to no answers, but he did dive a little further into why he’s not referencing pop-jazz. “I became so inspired by the idea of trying to put jazz from the Bebop era into the framework of a song, and there are definitely times that that’s happened. Like, A Tribe Called Quest is a great example of combining Bebop with rap music, but you don’t hear that much like old jazz in pop songs. So that was something that was floating around in the back of my mind.

“People like John Coltrane, and Charlie Parker, I think those people, those saxophone players, very much have a melodic style. To me, there’s something so inspiring about just trying to reference some of those melodic styles, in the context of a song that has lyrics and a song that like, your seven-year-old cousin could like. I guess my mission is to be able to make something that anybody could like, but then also is there to push the boundaries of what can be in a song that anyone can like. Can the interview just end now? Because I feel like I said, exactly what I wanted to say.”

Unfortunately, it can’t, because we’ve got some more twists to discuss. Like Rostam writing a whole song on the record heavily feverish and suffering from COVID-19. “A few people have said that that’s their favourite song on the record,” he says of the track, which he also states is structurally two verses on repeat along with a guitar solo the same length as the vocals.

He’s also working on some pretty exciting new stuff with Georgia, because spinning one plate is never enough for Rostam. “We started a song together that we wrote in one day about a year ago. And then she sent me another idea she started, and I’ve been working on that and adding things to that. And it’s fun. She’s in London, I’m in LA, but it’s been fun to collaborate remotely. And it’s been fun to make dance music and feel like my objective is to really make music that you’re forced to get up and dance to, and I hope that she feels the same way.”

Sounds like there’s plenty to look forward to in the coming year from Rostam, whether you’re bebopping or just bopping. He says he’s a natural optimist, so he’s looking forward to it too, and that he’s hopeful for the future.

“I feel like when you’re doing interviews about albums that haven’t come out yet, or aren’t even finished yet, sometimes you’ve learned more about the album from talking about it for the first time than from making the album itself, because you’re sort of guided by this other part of your brain. I would say the record is about change. I think internally, like how we experience change internally and how our minds adapt to change, and how sometimes we refuse change, and other times we’re able to embrace change. I would say that’s what the theme of the record is.”