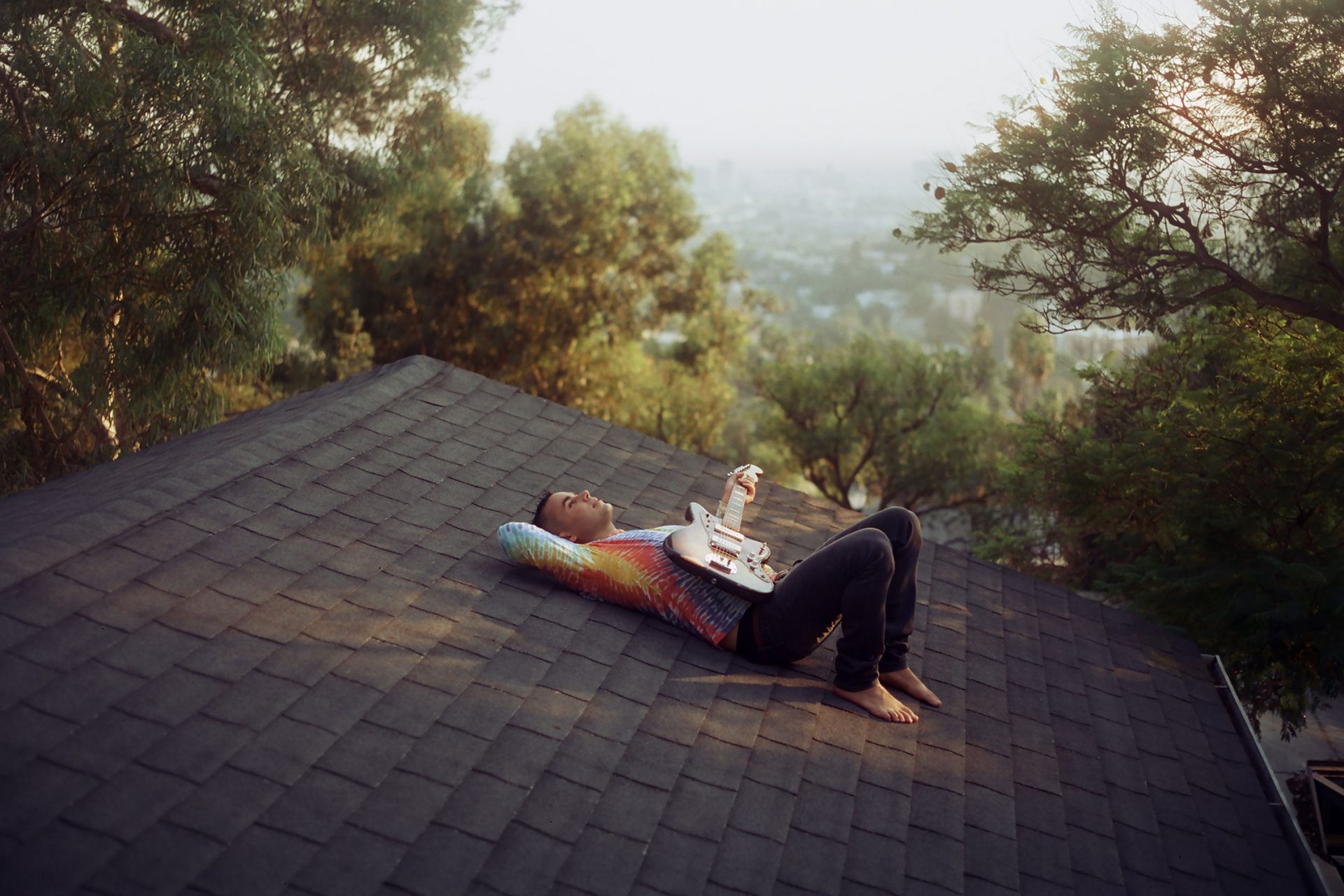 A chance encounter, a desire for change – Rostam is mixing things up for the better.

Receiving the life-altering advice of a stranger seems like the sort of thing that only happens in movies. For Rostam, however, a chance encounter on a park bench really did spark a total mindset transformation. Whether we like it or not, the past year has seen us all become uncomfortably acquainted with change. Thanks to that stranger, though, Rostam has long since been treading the ground of change. After hearing the encouragement to go forth and embrace change, the producer found himself pondering what change means, and why our attitudes towards it are so often riddled with fear. Out of that insistence that change can actually be positive, ‘Changephobia’ was born.

“I think there were multiple things in my life that coincided and led me to be interested in change,” Rostam muses. “Stylistic change, but also personal change and growth, and how those things are connected.” ‘Changephobia’ finds itself at the intersection of these avenues of his life: as it meditates upon our tendency to shy away from the uncertain and unstable, it sonically reaches into further than ever before and embraces that newness that comes with change. Leaning into a more jazz-enthused sound was a new venture for the producer, but the results show that venturing out of your comfort zone can have a really rewarding pay off.

“I had a rule that there would be no strings,” Rostam laughs. “I felt like I had used strings in so many eras of my career, and I didn’t want to do it anymore. If there were moments that were going to be grand, I didn’t want them to be grand because they had strings in them.” Rostam’s previous work has often had a grandness attached to it – it’s an innate quality to the soaring, atmospheric nature of his music. Tracks like ‘Unfold You’ might find a shivering intimacy through saxophonist Henry Solomon’s contributions, but they’re still pervaded by that dizzying expansiveness. It’s the type of music that invites you to get lost in thought as you listen in the same way that an ambitious string arrangement might.

The collaboration with Henry actually preceded the album. Following 2017’s ‘Half-Light’, Rostam found himself with multiple projects on the go, and the prospect of a follow-up album was really an idea to sporadically dip in and out of. “At the beginning of 2018, I booked some studio time, and that was when I met Henry. He came and played on the album before I had really finished the songwriting,” Rostam explains. “I was figuring out what the music was going to be before I had completed the lyrics and melodies process. I was kind of on a journey, and I was picking it up and putting it down. Two years after that, in the spring of 2020, I could feel it coalescing into a full record, and it just became about finishing it.”

Those earlier meanderings with Henry marked a new approach for Rostam, too. Characteristically meticulous in his process, past projects have seen the controls rest firmly in his own hands during the making of an album. “I was responsible for so much of the music in the songs I recorded historically,” Rostam recalls. “When I was writing for strings on ‘Half-Light’, I was writing every single note with notation software, this programme Sibelius, and I was extremely reliant on myself as composer. On this album, I integrated Henry into my workflow, and there were times where I would ask him to improvise a solo fifty times, and I’d construct a solo out of his improvisations, and then guide his improvisations. There was a little bit of letting go on this album. It was more collaborative than ever before.”

It translates to something like a long exhale. The shared contribution to the album might not have been entirely spontaneous, but there was a change regardless, and it resulted in an almost surprising end product. “There were moments where I did write out every note for Henry to play, and I knew exactly what I wanted him to play. But there were other moments where he was playing things that neither he nor I had ever heard before.”

This work together produces some of the best tracks on the album – ‘Bio18’ combines almost tribal drumming, which fades into an intoxicating saxophone solo, making an undoubtedly standout track. The album makes some unlikely combinations, but in doing so, its strongest moments are constructed. “For me, music is always experimental, and it is always spontaneous,” Rostam reflects. “I don’t know how else it could be. I don’t approach doing any aspect of making an album the same way every time.” The freshness of each release is palpable, and on ‘Changephobia’ more than ever: each ambitious pocket of it brings a sound both unexpected and revitalising because of it.

“A project becomes what it is as you’re making it,” he continues. It perhaps wasn’t until ‘Changephobia’ was a fully-fledged album that the link between the tracks was forged. Yet, that organic, authentic approach is evidently a winning one. Unpredictability can bring about some nice surprises.

A continued set of epiphanies arguably tied that invisible string of introspection which threads through the album. “I had a realisation as I was finishing the album that so many songs were about change, and as it relates to travel a lot of times – whether it’s in a car, or plane, or on a train. I think perhaps one of the things that I realised making this album was how important travel can be to giving you a perspective on your life that you might be missing.”

That break in the quotidian and opportunity to see things from a new angle is so valuable, and a completely different place is always primed to provide you with that new outlook. Rostam entirely channels that immersive experience in ‘Changephobia’. At just thirty-eight minutes long, you can’t help but feel engulfed by the seamless journey through each track. Emerging on the other side is like coming up for air, bursting out of your own ‘Changephobia’ bubble. In the same way that a long plane journey might see you taking a more inward glance, on ‘Changephobia’ Rostam provides you the time and space to contemplate things that would otherwise get lost in the flurry of day-to-day life. It’s a dedicated moment to sit and breathe – the perfect circuit-breaker to take solace in.

Being on the move also seems to be the perfect opportunity for creative inspiration, never mind just for that push you might need internally. “I think to some degree I’m always inspired, no matter where I am. I will sometimes take walks and do things like write lyrics, not for any specific songs, but just write lyrics down, or even listen to a beat that I like or I’m working on and come up with little vocal parts. Songs like ‘Kinney’ or ‘From the Back of a Cab’ started with beats, and it took me years to write the vocal parts. I was doing it wherever I was.”

‘Kinney’ is a jolting but necessary inclusion that sees Rostam reaching far from what is expected once more. Leaning into a more grunge sound, it was the source of some worry for the artist. “The song I had the most hesitation about putting on the album was ‘Kinney’,” Rostam jokes. “I think that I might lose the parents and grandparents. Any of the older generation listening that are saying ‘I love that saxophone, it reminds me of my childhood’, won’t be reminded of their childhood when they hear something that sounds like Nirvana.” The beauty of ‘Changephobia’, however, is its versatility: a perfect cocktail of genres and moods, there’s something to appease everyone. Dipping into so many sonic pools might seem ambitious, but it undoubtedly works in Rostam’s favour.

It’s not just sonically that Rostam branched out either. His lyrical process was also affected by these newfound realisations. The constant return to our state of flux infiltrated into approaching the lyrical side of ‘Changephobia’, too. “I find that recently I’ve been writing lyrics outside of the context of a specific song and then integrating them in songs. That was something I learnt from Hamilton Leithauser when I made a record with him – he’d take lyrics from other songs that he was writing and make them part of songs that we were writing together. I started to realise that there is something important about having some lyrics that have meaning in and of themselves – you want to say something with the lyrics of a song, and you want it to fit with the music. I do think there’s a limitation of if all the lyrics you write come over the music – I wanted to push past that on this album.” Luckily, the sound reflects it without overshadowing it: both share a mutual vision about progression and delicately dance around one another. The end product is balanced precisely because of that shared meaning.

The album comes to a rousing conclusion in the form of ‘Starlight’. An ethereal, twinkling grasp at closure, the track amps up the immersion, leaving you to emerge from your stupor in its wake. It’s a stunning piano-led moment on the album that invites tranquillity and epitomises the journey the album has taken you on thus far. “I started that song when I was in Japan, on a train,” recalls Rostam. “It was one of those bullet trains, which is called a Shinkansen, originally the song was called ‘Shinkansen’. I wrote the verse chords on that train. It must’ve been years later that I wrote the piano chorus part – when those two parts came together, I felt like I finally had the song.” The Shinkansen are some of the fastest trains in the world – ‘Starlight’ accompanies you on that headlong rush. It pelts through time and comes to a jolting conclusion.

‘Changephobia’ is one of the most optimistic albums to emerge in a while – even when lyrically, it might not seem so. ‘These Kids We Knew’ might be riddled with worry at climate change, but there’s an inescapable sense of hope laced into each beat. “We have to examine ourselves,” Rostam implores. “I think that’s what ‘Changephobia’ is a reminder about – that we can be better. The first step to being better is awareness and being aware of the root of our fears, and a lot of what I’m talking about on this album is that the root of that fear is really just a fear of change.” Without change, we would stagnate. Somewhere along the line, you come to realise that to grow and to progress and blossom into who you are, things cannot stay as they are, nor should we want them to. Change is inevitable. Rostam has come to terms with that, and he invites you to do the same.

Taken from the June 2021 edition of Dork, out now. Rostam’s album ‘Changephobia’ is out 4th June.