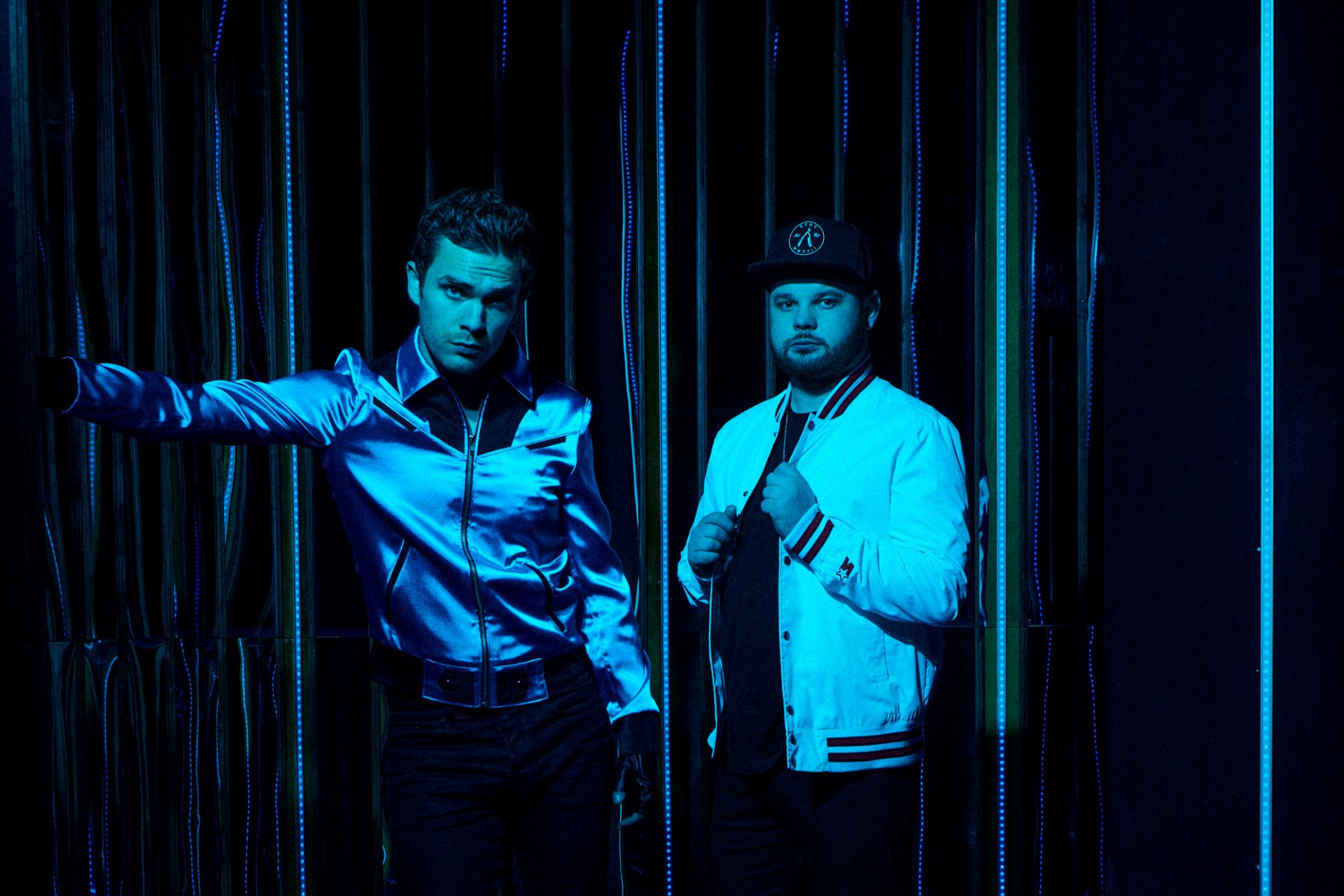 Royal Blood: “When it becomes life or death like that, it’s pretty serious”

Never mind all the awards, plaudits and sold-out arena tours; there was no disguising the trouble that was hiding on the horizon for Mike Kerr for some time before it swept in and crashed over the Royal Blood frontman. After a stratospheric rise for the Brighton band came a stumble, creatively if not commercially, and he soon found himself at a crossroads – both in his personal life and musically. Now coming out successfully on the other side, newly-found sobriety is going hand-in-hand with a triumphant record that is so good that it puts all the oooooohs into ‘Typhoons’.

To say Royal Blood got very big, very fast is as big an understatement as it gets. If any evidence of that rapid promotion through the ranks was needed, then consider this. After applying to play The Great Escape in their hometown back in 2013, they were dismissed out of hand. The following year, however, they were the hottest act in (their own) town and the talk of ALL the towns. “I wrote to them saying, can we get a gig?” remembers Mike with a laugh today. “They said, ‘sorry, no’. I was like, fuck you guys! I’ve always given a little wink to those guys since; remember when you said no to me?” The reaction to their self-titled and Mercury-nominated debut was just as feverish everywhere, and a host of awards soon fell at their feet. But by the time follow-up ‘How Did We Get So Dark?’ landed, the juggernaut looked to be finally running out of steam. Looking back now, it was something Mike was perfectly aware of. “Making the first one, we had a very clear idea of what we were doing, and why we were doing it,” he begins, “We were very self-assured of what we were making. The second one, we had outgrown that concept. It was no longer relevant, but we had to keep it up in order to fulfil everyone’s expectations.” Something needed to change then, but that shift wasn’t just confined to the studio.

After years of hard-living and hard-partying on tour, Mike was in a Las Vegas bar in early 2019 when he finally took the decision to quit drinking for good. “It wasn’t the first time I’d thought about getting sober; it was probably the three hundredth,” he says. “It was almost like I just surrendered to it. It’s like when you’re losing a fight, and you’re on the floor, and you keep getting smashed back down every time you peel yourself off the ground. It was the final punch in the teeth, you know? I was left with no other option.” There’s a long pause before he continues. “Although that isn’t true, is it? I could have carried on, to be honest with you. But I think I would probably have died. When it becomes life or death like that, it’s pretty serious,” he finishes quietly. Admitting that life as a rock star gave him a “free pass” when it came to excess, he points out that something would have been said to him in any other industry but his. “Being a lead singer in a rock band, though, if anything, you get a promotion for it?”

Hitting the studio once more with bandmate, and long-term friend, Ben Thatcher, they soon got the first rush from the newly sober Mike’s writing in ‘Boilermaker’, a track produced by one Josh Homme. But the big change was still to come. “Playing on tour that year, it just cemented my viewpoint that we needed to do something different,” he recalls. “Because as much as I loved playing those songs and I’m grateful for them, the idea of having ten more songs that sounded like that… I was so appalled by the idea of doing the same thing, I wasn’t going to be able to do that any more. Just for my own sanity.”

Describing it as a decision that left them with a “hunger” to be brave and do something different, it completely altered the band’s trajectory. “Had we not done that, we would have made the worst version yet of the first album.” Instead, ‘Typhoons’ was born, and it may just be the best version of a Royal Blood album yet.

It feels like a band reborn at every step. From the first stomp of ‘Trouble’s Coming’, through the full-on groove of ‘Limbo’ to the swaggering ‘Hold On’, it’s the sound of a duo who have finally clipped the strings holding them back to some idealised version of what their band should sound like. It’s taut, it’s tight, yet loose-limbed too, containing as many moments for the dance floors as the mosh pits. It is, frankly, one of the most surprising records that 2021 is likely to throw up.

“I don’t think I’ve ever felt as in charge; we just let the song ideas lead the way rather than adhere to what people expected of us,” nods Mike. “We weren’t like, let’s make a Royal Blood album. Instead, it was just, ‘let’s make the best fucking album we can. At whatever cost.”

Feeling increasingly clear-headed, it became easier and easier for him to focus on the ideas as they formed, and found that this period of turmoil and recovery was all he wanted to write about. “It just started coming out really,” he says, “and because I was writing through the eyes of sobriety, I was able to go darker and be as honest about it as possible. The whole idea of drinking and being on drugs is that you’re not able to be vulnerable because it’s too painful, but I had more strength and mental clarity in order to accurately talk about the past.”

All of which makes the lightness of touch in the music all the more surprising, but he describes it as “like cooking a dish you know, the bolder the flavour then you can counterpoint it with something equally strong. You know what I mean?” At this point, a more honest magazine may have admitted to the former chef that cooking any kind of dish like that is beyond most of us here. And that some at Dork (naming no names, but let’s just call that fictional writer Mamie Juir) think nothing of chucking in whatever random six items they find at the back of a cupboard into a saucepan and calling it job done. But instead, we protect our modesty, nod and act like we know just what Mike means.

Regardless of our lack of culinary skills, one thing that we can always smell is a banger. And ‘Typhoons’, a record that Mike describes today as “feel-good in a weird way”, is full of them. Perhaps it’s no coincidence that just as Daft Punk hang up their helmets, along comes another duo to replace them. “I don’t know if we have any chance of carrying on a legacy like that,” he laughs when asked if they are planning a move to Paris. It’s hard not to draw comparisons, to be fair, the ‘Limbo’ video containing faceless dancers working their stuff while in motorbike helmets. “It’s funny, I’ve noticed the word ‘electro’ getting thrown around a lot, but it’s a texture thing. Daft Punk and Justice made their synths sound like guitars, but I wanted my bass to sound like a synth emulating a guitar.”

Whatever the intention, it does again show the flexibility and genre-bouncing that modern rock music is currently enjoying. With a willingness to spread its wings into new sounds and styles, just like the success of Architects and Bring Me The Horizon, amongst others, it is yet another asteroid aimed firmly at the Big Rock Dinosaurs of Times Past. “It’s great, you know, and I think it’s probably more of a shift in the kind of music people are listening to,” smiles Mike at the success of the rock scene. “Those kinds of bands have evolved obviously, and are releasing some of their best material ever right now. I think people are tuning into that kind of rock world and are less squeamish around anything distorted, you know?”

Equally adamant that it is the talent of the acts around him and not just trends that are leading this moment, “If someone came out with the next ‘Back In Black’, it would never have gone unnoticed, you know?” It’s clearly an exciting time to be in the UK rock scene.

One plaudit he isn’t fussed about, though, is any potential chart success, shrugging at the thought of following fellow Brighton band Architects to top spot this year. “Awards and statistics, it doesn’t make me feel any differently about what we made. It’s not like, ‘Oh, this sounds better now I’ve got an award in my hand’,” he laughs.

But, waiting for the album release without all the launch razzle-dazzle that you would expect is a strange sensation for him. “I feel like a spectator at my own rocket launch, rather than being on it,” he ponders. “I’m not immersed in the chaos of what it’s usually like at this point. It’s just fingers crossed that it doesn’t blow up.” That return to live shows and normality is just as important to him as anything. “Everyone just wants to have a good time; it’s gonna be mayhem.” At last, it seems that it might just be only good times that Mike, and all of us, can see on the horizon once more.

Taken from the June 2021 edition of Dork, out now. Royal Blood’s album ‘Typhoons’ is out now.