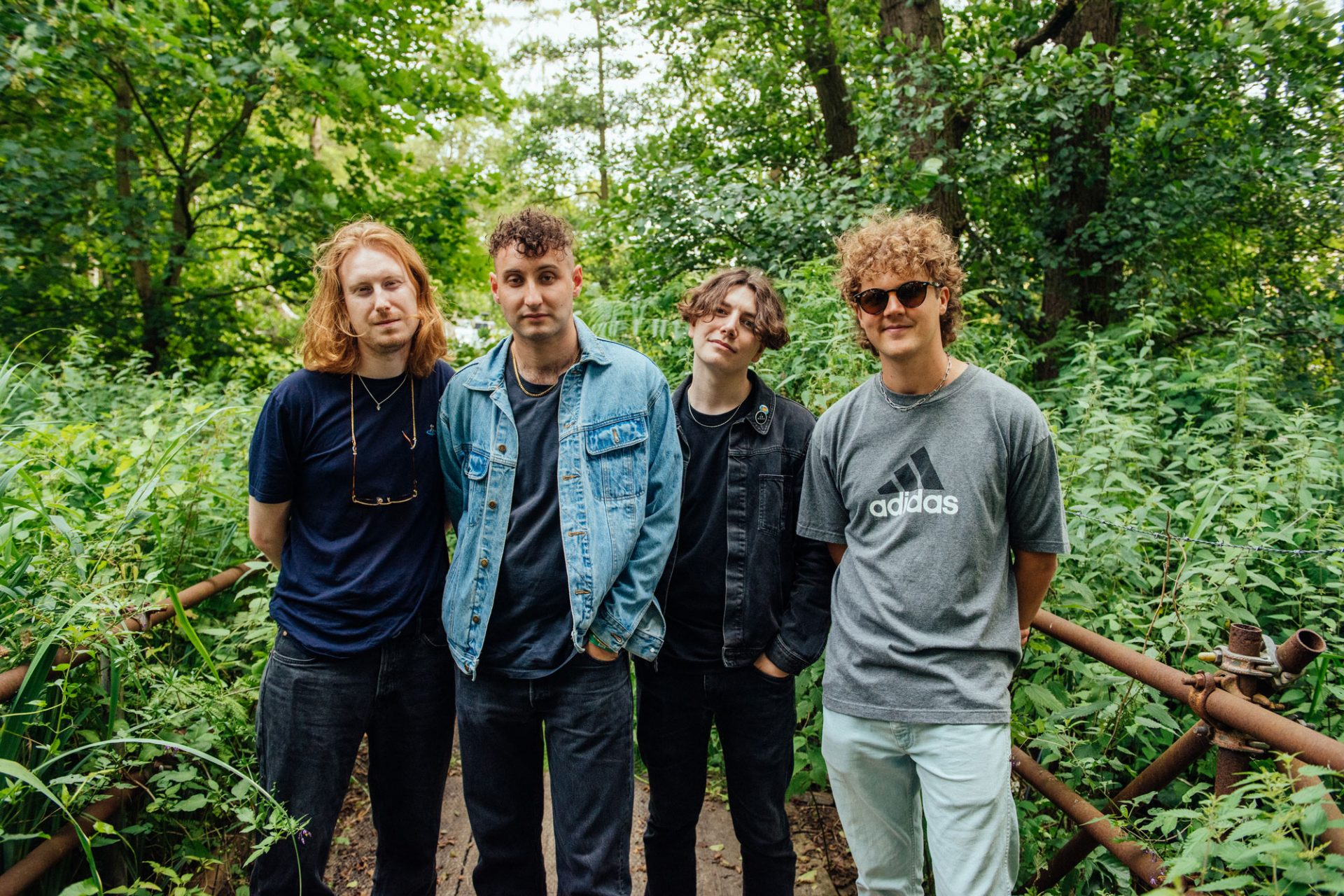 One year on from their debut album, and Sea Girls are gearing up for round two.

Sea Girls are notorious for consistently delivering anthemic indie-rock bangers that discuss mental turmoil in the most energetic and cathartic way possible. Following a long list of EP releases, they charted at Number 3 with 2020’s debut album ‘Open Up Your Head’, which certainly helped their spritely fanbase do exactly that. While their tunes are synonymous with bouncing live shows, Latitude provides their first in a long time and finally gives the band a chance to show off some of these invigorating tracks.

As frontman and songwriter Henry Camamile gushes backstage: “This is the most we’ve ever looked forward to a show. We never knew we wouldn’t be allowed to play for so long, and we’re desperate to play songs like ‘Do You Really Wanna Know’ for the first time.” With the huge impression this song has made, it’s hard to believe that it’s only played in headphones behind locked doors, but this is far from an isolated case. Bassist Andrew Dawson notes that “probably two-thirds of the album hasn’t been played live before, definitely at least half. We’ve not played some of our first album, ever!”

While the arena-ready nature of the record is instantly apparent from its bold, vibrant soundscapes, a lot of the songs on it are actually surprisingly personal, with Henry wearing his heart on his sleeve with tracks like opener ‘Transplant’ that explores blatant heartache. The confidence to bear all on these songs, particularly in front of thousands, is instilled by a group of supportive bandmates and friends. “You know that no one’s going to frown upon your ideas in this band,” he imparts. “We’ve always loved just helping people have a good time and making a room bounce. We’ve also always been quite emo-minded in our themes, not necessarily sad but quite heart-on-our-sleeves, yeah. There’s always something to be sad about.”

“People sometimes say the second album is the scary and horrible one, but this hasn’t felt like that at all”

On the balance between joy and sadness, introspection and energy, Andrew adds that Sea Girls are “letting people into our world when they’re listening at home, then giving them a really good time when they come and see the set.” After contemplating their roles as musicians, Henry explains: “The whole point of writing is to give something else that people can’t find in other aspects of life. It’s about putting more of ourselves into the world than the regular person on the street; that’s our job. That’s why people would listen to us: they see that we’re speaking about things that aren’t very cool and that – in its own way – is cool.”

Moving on from one period of reflection and into another, Sea Girls’ second album is now on its way. With single ‘Sick’ and news of second album ‘Homesick’ to follow next January recently making its appearance, teases of this new chapter are beginning to be unveiled. On this first glimmer, Henry explains: “’Sick’ is basically me ranting – it’s something that we haven’t given people, something we haven’t said. It’s a unique song that doesn’t hold back, and again isn’t necessarily the coolest thing to say, but it needs to be said.” Andrew adds that, “it’s probably a bit different to the classic indie banger that people might expect, but that’s how we’re not letting people down – we’re keeping it interesting.”

“We’re not coming back around with the same songs, the same stories. We want to keep growing and surprising”

It seems the ‘difficult second album’ is not dragging down the band’s ambitions at all, then. “People sometimes say the second album is the scary and horrible one, but this hasn’t felt like that at all,” the bassist continues. “We’ve been maybe even more honest.”

With a theme of promoting vulnerability as an essential criterion for growth continuing to unfold across an ever-growing discography, the walls of sound are also shooting higher and higher. “We’re still the same band, but we’ve been more ambitious with the sound; it’s way bigger,” Henry excitedly expands. “We’re not coming back around with the same songs, the same stories. We want to keep growing and surprising.”

With a UK headline tour slated for October, fans shouldn’t have to wait long to get a taste for these fresh flavours of indie-rock treats. They’re also bringing rising star Baby Queen along for the ride across the country. As a band that have recently risen from support act to headliner status, Sea Girls understand the importance these shows hold for such artists and empathise with the last year’s frustrations. “To get out in front of people is amazing,” Andrew shares, “and so to help others do the same is even better. We had Foals do the same for us, so it’s great to pay it forward.”

As Henry succinctly contributes, “I feel sorry for those people that got stopped in their tracks, particularly young people who should be out starting bands, but just remember that the dream is still alive.” How have they managed that so far? “Fuck knows,” Henry laughs. Andrew jumps in to say that, for them, “it comes down to simply entertaining people as best we can. If you do that well, hopefully, you’ll keep growing and get better. Entertain, share moments with people, and they’ll keep coming back for more.”

If the Sea Girls fanbase has proven one thing, it’s that they are indeed always ready for more (pun fully intended). The present members are quick to gush over the passion of their listeners, and Andrew addresses them directly, announcing that the new record is “as much for you as it is for us. It’s been a weird situation for everyone, and we’re honoured that you continue to support us – it’s really helped.”

Henry declares a similar message: “We still love you! We’ve had you in mind while making it. We feel so lucky to have fans that have stuck with us from song to song, lockdown to lockdown… this year, having our music to keep us together has been so great. Expect big things.”