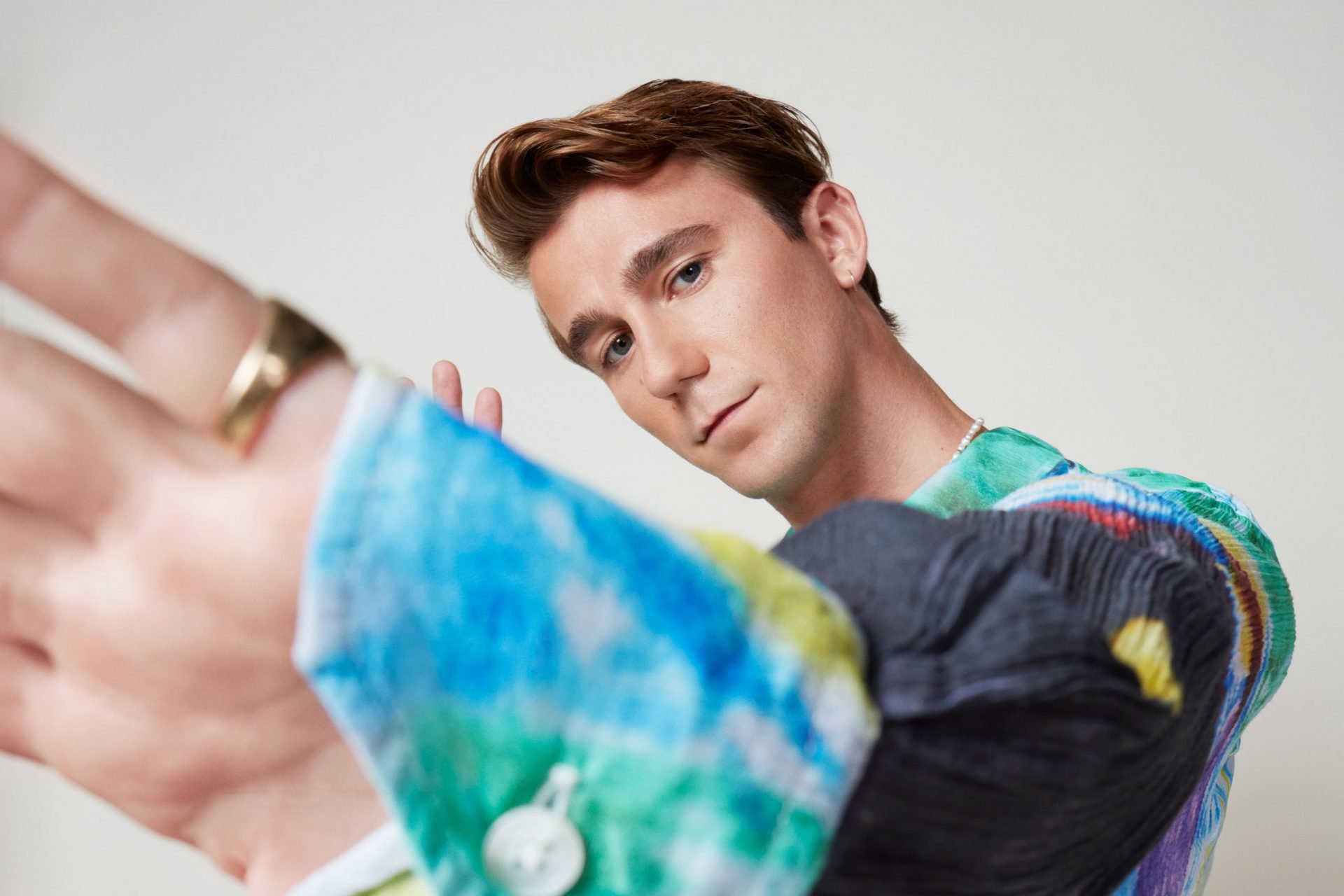 SG Lewis: “I definitely was, and still am, nervous about sharing some of this music”

Having already proven to be worth his weight in gold when it comes to dancefloor bangers, SG Lewis is now stepping up as a frontman to deliver a new double album of pop hits exploring the duality of love and lust.

The last time we caught up with SG Lewis, he was so desperate to get back to overpriced drinks and dirty dancefloors that he dropped a whole album in service of transporting us right back into that late-night euphoria. His first full-length project, released in 2021, was an ode to rose-tinted memories of the club and followed the trails blazed by a series of multi-faceted EPs.

“It was funny – in many ways, ‘times’ didn’t feel like a debut album to me, but just another project,” he reflects. “For the first time, I had enough to say and enough to express musically that I wanted a full-length runtime. It felt like a very natural process, and I wasn’t looking back at any point; I wasn’t thinking about music I’d made before or trying to better myself. I was just facing forward throughout, and that kept my momentum going.”

The forced stagnation of the last few years didn’t halt that progression, as the producer started to formulate new ideas with their own unique challenges. “Instead of taking inspiration from things externally, this album is a lot more introspective in its processes; its thoughts, the song topics, the feelings are more from an internal perspective because that’s the nature of isolation that was enforced upon us.”

Quickly finding new ambitions and more nuanced concepts with the confidence instilled by the success of ‘times’, Lewis began to flesh out a double-LP of new material through month-long stays at residential studios across the globe. The intensity of the methodology forged relationships that grew deeper than any previous collaborations. “With ‘times’, there were more features, and as such, you’re almost speed dating; you’re forging a creative partnership for one track,” he explains. “With this album, there’s a lot more consistency of the teams that I was writing with. That pushed things further because we built a level of trust through the process, which allowed us to try things that we wouldn’t necessarily be willing to do in the studio with someone you’re only working with for a day or two.”

“My comfort zone is always going to be behind the boards; the idea of fronting the show was petrifying”

That shared self-assurance has resulted in some surprising songs that could only have come about by becoming comfortable with being uncomfortable. “Being honest in a room with other people, speaking about your feelings in a vulnerable way, is really quite a nerve-wracking thing to do. It probably shouldn’t be, but it is. On an emotional level, being open with my collaborators and engaging in conversations that allowed us to create the best music that we could did require some pushing through.”

As well as those behind-the-scenes connections, Sam has allowed some room for other names at the forefront of this record, too; some familiar faces like Channel Tres and Lucky Daye return, while Tove Lo and Charlotte Day Wilson join the fold. “It’s really about the people that you’re surrounded by in the studio and having a good creative relationship with people,” he says of his willingness to involve external hands in his output. “The repeated collaboration just comes from the creative community I exist in, especially now living in LA; I would see Channel in the studio most weeks. Tove Lo is a new one, and that partnership was immediately fluid, and it was so easy making music together. It came so naturally that I’d imagine we’ll explore that more in the future.” The pair have already shared two of their tracks to date, but “if something feels good, why not try more of it?”

When throwing these collaborators into the spotlight, Sam can relax a little and hide behind the DJ decks, but this shyness is a trait that he’s clearly tried to push past through this entire venture. “My comfort zone is always going to be behind the boards, but it’s almost by necessity that I’ve ended up at the forefront,” he says. “In order to continue to grow as an artist, you have to be pushing yourself outside of your comfort zone. Originally, for me, the idea of fronting the show was petrifying; I wasn’t naturally inclined to be on stage when I was a kid. It’s something that I’ve grown into, and I can now get a lot of joy from expressing myself in that way. Coming to the forefront of the live show has come with singing more on records – because that’s the easiest way for a performer to connect with an audience – and gaining confidence from doing that.”

“‘times’ is very much a soundtrack to dancefloors; this is more reflective”

Tackling his feelings head-on also applies to this new set of songs; where ‘times’ sought to capture the energy of a headspace that seemed out of reach, ‘AudioLust & HigherLove’ stops to acknowledge the reality of SG Lewis’ world. “This album definitely doesn’t feel escapist in its fundamental nature,” he confirms.

“’times’ is very much a soundtrack to dancefloors, whereas this is more reflective and serves a very different purpose,” Sam continues. “It’s about laying my cards on the table and analysing what lies there without trying to run away from it all. It feels like a more selfish project – ‘times’ was a record for everyone else, this record is ultimately for me. Conceptually, yes, but also on an artistic level, I’ve wanted to make this album for a long time – being able to explore how far I can take my own voice and how far I can push my thoughts as a singer-songwriter. For having made this record, I now know a lot more about myself as a singer and songwriter, which I couldn’t necessarily say before.”

With a brave new project now complete, and a whole new planet of personality and colour opened up, there was much careful consideration around introducing this to listeners. Opting to tease the record with paired cuts from each side – the “rushy, moody” atmosphere of high-energy lust, and the “warm, psychedelic” form of more realised love – the album launch kicked off with two club hits, ‘Missing You’ and ‘Something About Your Love’, before taking a purposeful sidestep away from the dancefloor.

“It’s about laying my cards on the table”

“There was an intentional leading of the listeners down that new path,” he admits. “I definitely was, and still am, nervous about sharing some of this music. With club music, there’s a detachment that you can hide behind; with the escapism of dance, there’s less focus on the sentiment of the song; it’s more focused on the feeling. Once you remove the dance element, the focus shifts more onto the lyrical content.”

Citing yacht rock and 80s pop as the slower styles that he was channelling here, SG Lewis used the lack of context for rave tunes to tap into something new. The result is an LP that feels almost like an entire reintroduction to the now LA-based artist. “I think I’m just letting people further into my head rather than taking a deliberate risk, and I find some comfort in that,” he ponders. “My fear would be that people would be confused or not know what to expect, but I’ve always left breadcrumbs along the way hinting that people shouldn’t just expect dancefloor collaborations from me. That’s not to say that in the future, I won’t want to do more escapist club music – that is something I really enjoy creating, but this album was one that I felt that I had to make to understand myself as an artist more.”

Now out of the shadows with a diverse and expansive project that focuses on an idea rather than a sound, Sam initially considers ‘AudioLust & HigherLove’ to be a leap of faith before declaring, “actually, I don’t have any other option”. He continues: “I want to continue to push myself as a producer, writer, and singer, but I’m not having to beat myself or better the last album because I’m not repeating the same thing. It’s a whole new world; I’m just trying to keep facing forward.” ■

Taken from the February 2023 edition of Dork. SG Lewis’ album ‘AudioLust & HigherLove’ is out 27th January.