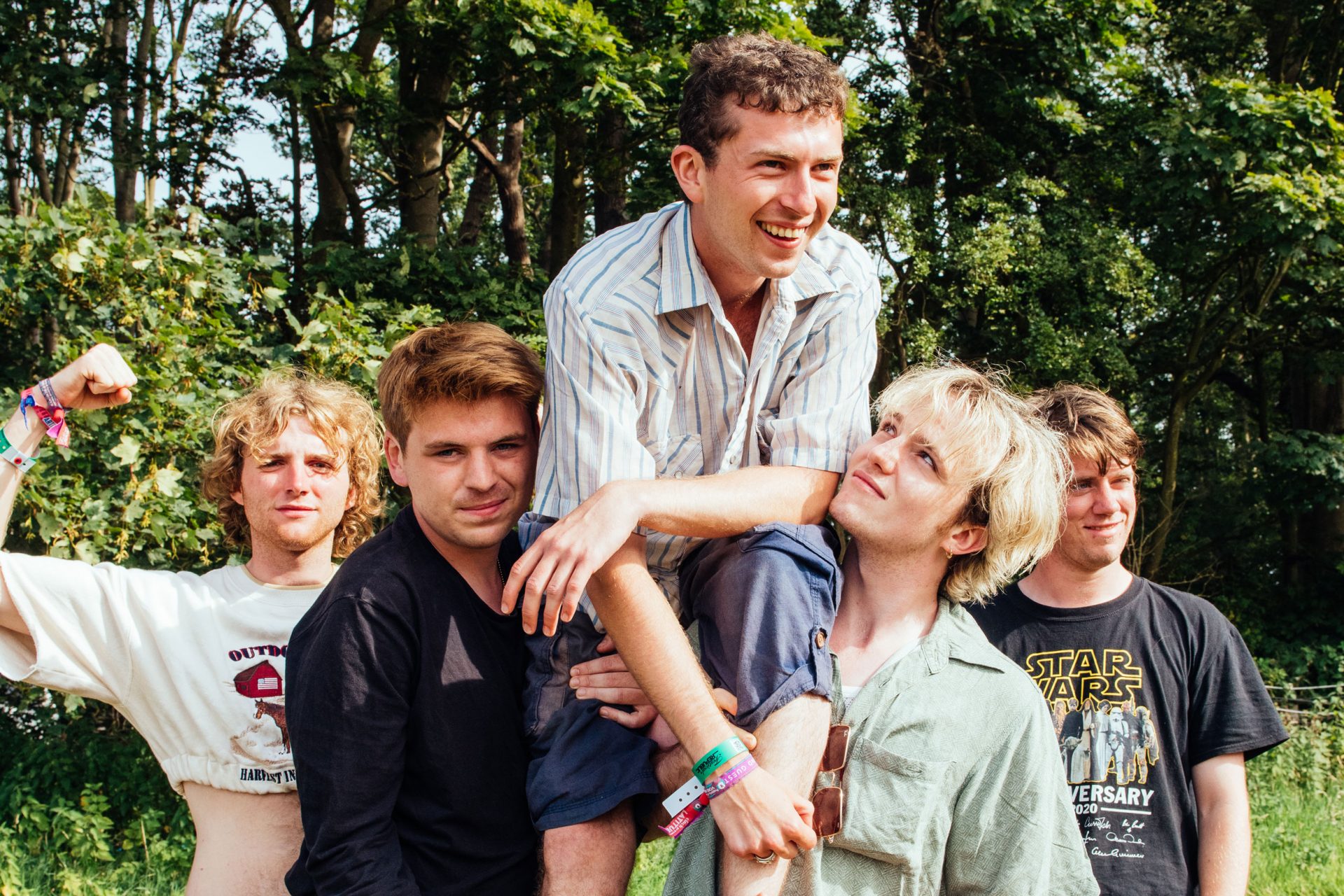 Shame: “‘We’re not the new kids on the block anymore”

Shame are finally back on stage, six months after the release of their new album.

Latitude may be a family-friendly enterprise, but among all the festivities and glittered-up adolescent faces happy to finally go out big, there’s Shame. A band whose new album ‘Drunk Tank Pink’ puts to bed any illusions on the messed-up state of things and directs a stream of post-punk consciousness to society’s most vulnerable spots. Now, after they’ve victoriously come back from Seven Circles of Isolation Hell, Shame are taking a brief break on the bright side; in the sizzling hot sun, we catch up with them to get a full report on their recent voyeurs, new remixes, and kicks to come.

How does it feel to perform ‘Drunk Tank Pink’ live in front of no-distance audience?

Eddie Green: It’s great because it’s so frustrating to have a record released and not be able to really tour it or do anything live with it. We did a socially distanced tour, but it’s difficult to replicate the feeling of playing tour for a full-capacity, no-distance crowd. Very excited for tonight, looks like it could be a pretty big show.

Sean Coyle-Smith: Up to this point, we did one festival show yesterday at Standon Calling. We’ve seen a lot of friends’ bands playing at this festival, but also at the same time people having to pull out; we’re some of the lucky ones, being able to do that.

Looking back at ‘Drunk Tank Pink’, you really deep-dived into the void and mirrored the worst parts of reality. What does it take to tap into this kind of mindset? How did the concept for the album start?

Charlie Steen: We made the virus while we were writing the album, and then we wanted to give it a 4D feel.

Sean: We were kind of ahead of the game. We saw it coming. We did write about isolation, and then everyone was forced, and we were like it worked.

Did you write it all before the pandemic, then?

Charlie Steen: We wrote the record before the pandemic. The record was written after we finished on a long stretch of touring. I think it was kind of coming to resolve about being static again.

Sean: When we were in the studio, we had just been in Chicago for New Year’s Eve, and we were in the studio two days later in Paris. When the news first broke, we were holed up in this beautiful mansion studio on the outskirts of Paris. We were lucky; I mean, if it had been delayed by a month or two months, it wouldn’t have happened.

Charlie Steen: We delayed the record; we were sitting on it for like, five or six months. That was really frustrating, but now we can play. We wanted to be able to, and we did a socially distanced tour. Three weeks around the UK, places we hadn’t been to before.

That’s great. Everyone now is thirsty for music live.

Eddie: Yeah, I think there was definitely a vibe that people were very grateful to be out again.

Sean: Also, we desperately needed the practice. I think up to a certain point until you play all those songs live, they’re not true. It was always like, ‘is it going to be weird playing our first album tracks with the new album tracks?’ It’s become second nature but, on that tour, they came to their own. You need time because the way you end up living with songs is not just through recording them and then listening to them afterwards. It’s playing them live. You end up feeling like a lot of things you would have done differently, but at the same time, like you feel closer to the songs than you did.

You’ve recently released remixes of ‘Born in Luton’, can you tell us a bit about that?

Eddie: It was something we really wanted to do because it was probably one of the only songs with a kind of electronic backbone. Over the last few years, we’ve become friends with artists who delve into the more electronic side of things, so it seemed like a pretty obvious thing to do.

Charlie Steen: Big up everyone who did the remixes.

What are your plans for the near future?

Charlie Steen: We’re working backwards. We’re going to be hopefully touring the UK in November, which is going to be good. They’ll be some big shows. In 2022, if things hopefully pick back up, then it will all go back to the way that it was before. And we’ll be doing a lot of travelling. Tour of all the other continents, hopefully.

Charlie, on Friday, you joined Lynks on stage for ‘This Is The Hit’; how did that collaboration come about?

Charlie Steen: I’ve known them since I was like, 14. They’re from South London. They went to a different school, but then they moved down into a place called The Rising Sun. That’s next door to the nursing home I used to live in, where we wrote ‘Drunk Tank Pink’. Lynks just send me a message saying, ‘I’ve got this song video remix for you, do you want to do some vocals?’ I went down, and it was like, half an hour. They’re so good.

How is the community in London now that the music scene is a kind of going back to life?

Eddie: It’s interesting because the scenes are built on the live aspect around them, so having been in the absence of that for so long, it’s difficult to quantify where the scene is at right now. We’re so out of the loop. We’re not the new kids on the block anymore. People think we’re old now.

Since we’re at a festival, what’s your weirdest festival memory?

Eddie: One time, at a festival in the Netherlands, we played on an island where there were no cars. After the show, I decided to cycle back to our hotel when I was no fit state to do so but rode it anyway. I kept falling off the bike into the bushes, and these two people in hi-vis vests, picked me up, asking me why I was really drunk. I was like, ‘well, I’m at a festival’. They were being quite judgmental and a little mean. They walked me back to my hotel, and they gave me all these leaflets. They turned around, and they had a weird logo on their high vis vest. Turns out they were a cult. They were trying to indoctrinate me.

Sean: Me and Steen had a proper ET moment at that festival. We thought just because it’s a festival where it’s only bikes, we’re in the Netherlands, that we didn’t need to lock up our bikes. So, someone stole it, obviously, and we spent like three hours literally going around bikes to try and find one that was unlocked. We eventually talked our way back into backstage at four in the morning, and we got a bike. I had to sit on the handlebars, and Steen cycled me home.