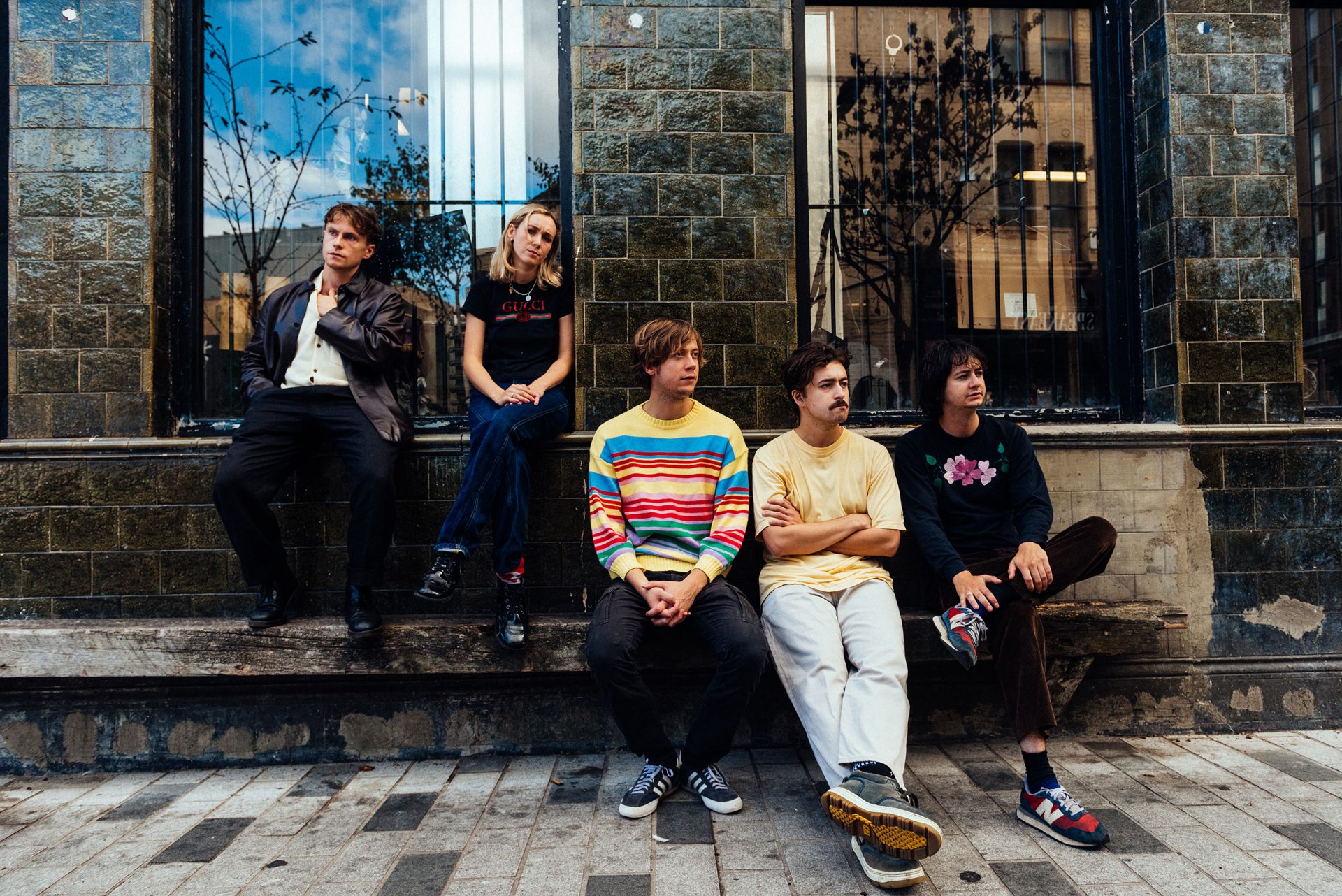 Sorry: “We’ve been in this city our whole life; it can be inspiring, and it can be lonely”

With their second album, London band SORRY examine their ever-evolving relationship with the city they call home.

“It’s wide out there,” Asha Lorenz remarks dazedly. She speaks of those weird plains of America, somewhere she and her Sorry bandmates recently became reacquainted with. Vampirish venues, a support slot with Sleaford Mods and a sense of prophetic happenings greeted them after their last venture to the States was abruptly interrupted by that pesky pandemic. An image of a deserted New York as it shut down stuck with the band. Returning back to that expansive world seems distinctly full circle.

With their first full-length ‘925’ arriving in late March 2020, that image of the excavated city had already taken root far too close to home. Two years on, the band return with ‘Anywhere But Here’. An inescapably moving time capsule of the period between records for the group, it’s a dark, brooding addition to the Sorry world – a more developed and assured sibling to their debut, for sure.

“Because we didn’t get to play our first album, we only read stuff about it on the internet,” Louis O’Bryen, the other half of Sorry’s core songwriting duo, recalls. “It’s hard to gauge how much people liked it, but I think that took a bit of the pressure off. The first album, you’re just judging it on what you think is best, but with the second album, it’s super easy for what people expect of you to creep in.” Despite the second-guessing and unasked-for opinions of others, ‘Anywhere But Here’ creates a world populated solely by Sorry – boldly expansive, gritty and intrinsically them.

“We wanted to do it backwards,” explains Asha. “We produced the songs already, then all the bits that came from the production, we recorded those in the studio with another producer. We put all those glitchy sounds within the live take rather than overlaying it. With the last album, when we started playing it live, the songs became way bigger. We didn’t want to be annoyed if it sounded cooler after we recorded it smaller.”

Going in with that mindset almost seems like, subconsciously, the band knew that what they were creating would spiral out of control and become its own entity once out in the world – the scope of what they could create was immense. But, in the context of the album, those broad, spacious moments are all important. ‘Anywhere But Here’ is a cavernous expanse where those fears of it becoming cooler once unleashed on the world are quickly dismissed.

“We wanted it to feel bigger and wider but for it to be quite slow as well,” says Asha. “We wanted the sounds to feel deeper. By recording it in the studio, trying to be cohesive and thinking about guitar sounds, it was stuff we had never thought about before.” Working with Adrian Utley (of Portishead fame, no less) and Ali Chant, the band captured that stretching, void-like space with every track. The relationship between the group allowed them to craft something that, production-wise, leant into modernity but remained distinctly classic elsewhere.

“When we were writing the songs, we wanted it to be more classic with more 70s songwriting where it’s really thought out,” Louis notes. “We were listening to a lot of Carly Simon,” they both agree. Lyrically, it becomes deeply reflective of that time frame everyone experiences – bewildered by the second coming-of-age your twenties brings, met by heartbreak, infatuation, spiralling emotions and that intense mental fog that lingers persistently at the moment. Gone are the satire-laden, sullen remarks of ‘925’, and in their place is a far more intricate, sensitive version of the band. There’s a richness to that newfound depth that is completely transformative for their sound.

In a lot of ways, it seems like a new state of being for Sorry – and so is the nature of a new album cycle. It’s an opportunity for reinvention, revitalisation, and reimagining what may come next. It’s more complex than that, though. These ideas of endings and resurrection are crucial to the album. The closing track, ‘Again’, hums with unease and repetition, yet Asha’s voice cuts in during the last moments to remark, “I don’t know how long it goes on for”. The sentiment feels prescient on an album which revisits these notions of change and inescapable cycles. Things draw to a close, but they bounce back into a disguised yet similar shape.

“One of the songs was about someone I loved before, and I remember feeling really sad about that song,” Asha reflects. “Then, I had another breakup, and I felt those same emotions in the other song. I realised it was not about that person. It’s about that feeling I was missing. It’s funny how the song changes, but it still has the same feeling.”

In making the album, though, the band seemed to find a way to close those chapters and free themselves from repeating cycles. Something you need to internalise and learn from will be delivered to you in different ways until you take it in – ‘Anywhere But Here’ acts as a means to deal with those lessons and move on from them. “It’s just like a rebirth. You have to go through these things. They can’t not happen once they’ve happened, and you have to deal with it. The album was like a shedding of skin – there are lots of things I can put in the past, and hopefully, people can connect to something,” Asha affirms.

“We’ve been in this city our whole life; it can be inspiring, and it can be lonely”

Louis echoes a similar idea: “Time goes by when you’re in between albums, and you change. We all change as people. It naturally feels like you’re seeing the world or the city you’re in differently. I think that builds a rebirth or reimagining of the world and how you see yourself.”

Seeing the city they were in in a different way was, of course, inevitable given how desolate it became. The North Londoners have long found that the culture of the pace  they know best has seeped into their sound, but on ‘Anywhere But Here’, that atmosphere soaks the album to the bone, lending an added layer of grit. ‘Key To The City’ roars through, hexing an ex as it situates itself within the stretching walls – “I know that you’re somewhere out there”, they repeat throughout, the knowledge of that proximity forcing a spiralling sense of loss in a place they call home. It comes in gasping breaths and shaking loss, an omniscient-like countdown dialling that palpable anxiety to the absolute max. “When your mind goes around like that, and there’s nothing you can do, I wanted to be a bit spiteful,” Asha laughs. “I feel like the only thing you can do is be spiteful. It doesn’t make a difference, but you have to do it for yourself.”

London is tied into these stories – it’s at the root of every interaction, each overheard whisper and reeling tale. ‘Anywhere But Here’ becomes a sonic embodiment of a dark, misted-over city; that brain fog another instrument in their arsenal. Those feelings of desolation and eeriness are more feverish than ever. ‘Screaming In The Rain’ is a more subdued, crawling moment, but the feelings it sits on shout through that void. Louis’ vocals are wrought with distress, swallowed up by the weight of those crushing emotions. Asha’s join with equal forlornness, making each note hit with growing vehemence even despite the despondent guitar lines.

“We were doing it really simply, and that’s when the two vocals played best off each other,” Louis shares. “It came together naturally. We tried loads of different things with that song, but we kept going back to this version of it. The lyrics and vocals are super intense, and we wanted everything else to mirror that intensity but still be quite simple.”

That ferocity at the album’s core is perhaps, again, a reflection of the band’s environment. Had they created it on a nice countryside retreat, would it have had the same impact? It’s unlikely. “We’ve been in this city our whole life, and there’s always lots of different personalities very close to you,” Asha resolves. “It can be inspiring, and it can be lonely when your emotions naturally go so high or low just from being around so many people all the time. The landscapes, as well. Because it’s busy, there’s lots of emotion. You can do what you want in a city and follow what you want.”

She touches on a key point of ‘Anywhere But Here’, one that hits you even from the first listen. It’s ultimately incredibly reactive – to those environments, that murk that looms over them, to every waning feeling. Anything could become a song for Sorry. “Usually, people will say something flippantly, and it’s like when you’re reading a book and one line unlocks loads of things that you’ve been thinking,” muses Asha. “I think I’ll be thinking about an idea, and someone will say something that unlocks the whole song. It can be really stupid, but it’s funny how your mind connects stuff.”

“We’ve done that a lot,” adds Louis. “If you’re having a conversation with a loved one and they say something that really resonates, maybe we’d make a note of it on our phone or just remember. It’s another way to start a song. When someone says something that sticks with you – and especially if it affects you in a personal way – it’s good to put that into a song. It helps you figure out that emotion you have more.”

Despite talking to both separately, Louis and Asha are deeply in sync with their thoughts on the album. They often mirror each other’s musings, and having worked together since being in school, it’s no surprise. It’s that bond which elevates the album, too – that synchronicity and the effortless way in which their vocals adapt to the song, wrapping around one another in an array of different ways. They can be unnerving and jolting, but at times they meld into one another soothingly. The guitars can be discordant and tremulous, but their vocals are often hushed and unstrained.

“Sometimes me and Louis can picture things,” Asha says. “If he puts on a voice, I can picture his character as a person that I see in my head, and he can as well. Sometimes we can just click on a song, and both know exactly what the other is talking about and what we want to evoke.”

‘Anywhere But Here’ proves Sorry are a band deeply in tune with themselves, each other and the world around them. If it falls apart, their sound disintegrates with it. On their second album, Sorry capture what it’s like to experience such an unpredictable period of life – as though you can feel their hearts beating with the stress and anticipation throughout every track. As they step up from their first record, their capacity for encapsulating a moment in time grows. “You learn a lot when you get into your twenties,” Louis ponders. “But maybe you don’t. Maybe I’ll look back at this and think, I was just a twenty-five-year-old. What do I know?” Only time will tell. ■

Taken from the October 2022 edition of Dork. Sorry’s album ‘Anywhere But Here’ is out 7th October.