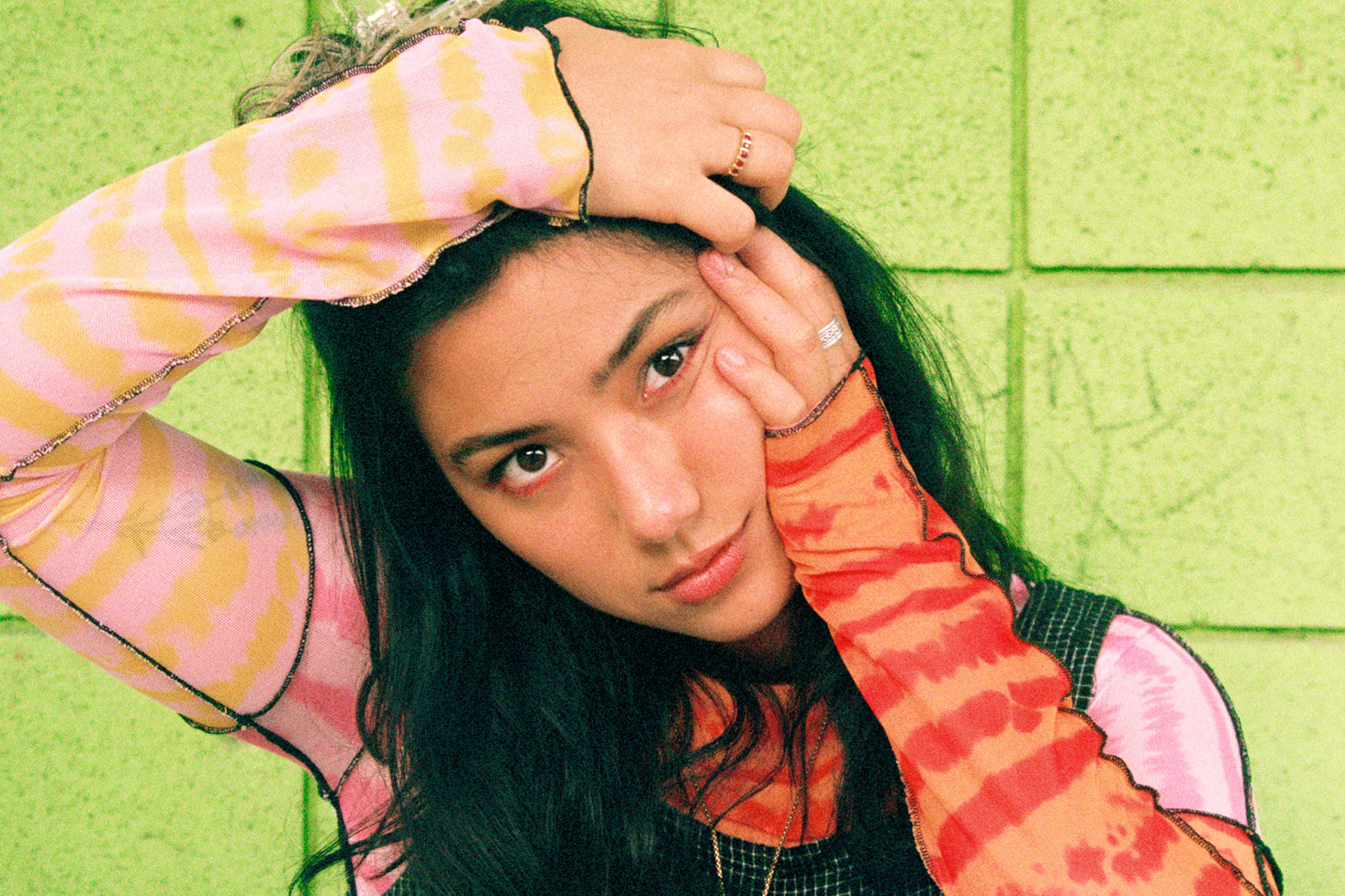 Spill Tab is one of those amazing people who’s effortlessly multi-talented. So multi-talented that sometimes they don’t even realise it themselves. The French-Korean-American artist, also known as Claire, has packed a whole load of experience into their young life. She’s made music across the globe, worked with a load of different cool people, and has the magical skill to create perfectly poised alt-pop songs that hit you right in the sweet spot between blissful beauty and I-don’t-know-what’s-going-on-here-but-it-sounds-amazing. We’ll get to Claire’s rising status as a new-gen rising alt-pop star, but first, let Claire tell us about one of her many talents that she’s particularly enjoying right now.

“I have been getting more and more into tattooing recently,” she explains from Paris, where she’s been working. “There’s just something about poking someone else’s skin with a needle. I made that way darker than I needed too,” she laughs. Oh yeah, she’s really funny too. That’s another talent. “It’s so far removed from music and really tactile, so it’s a great way to step away from the music medium,” she continues before describing her best tattoo creation so far. “I did a set of three different kinds of sushi on my friend’s thigh. There was a sushi trilogy going on!”

Spill Tab has only been making music for a couple of years but has already made a huge impression with a string of viral earworms collated on 2020’s debut ‘Oatmilk’ EP. She comes from a big musical background, with her Algerian father playing jazz saxophone and her Korean mother playing piano and harp. After moving from Bangkok to Los Angeles at 8 months old, Claire began a lifelong immersion in music and creation, taking in a wide breadth of different cultures and experiences that have informed everything that goes into her music as Spill Tab. “The nature of the whole thing has been just the idea of trying something new,” she explains about her vision behind Spill Tab. “That continues to be the spirit that ties it all together. I always want to be entertained and not bored by the things I make.”

As she started realising she could write songs and people might like them, the vision for Spill Tab grew ever more ambitious. “I definitely had it in mind from the start that I will become America’s number 1 top star,” she laughs. Maybe there’s a slight element of sarcasm in there, but maybe not. This could actually happen. There’s something beautifully relatable and resonant about Spill Tab’s music that connects across generations and cultures. “In the beginning, it was the idea of creating something that felt musically accessible but also accessible as a person,” she says. “I always want to come across as someone you can hang out and talk to and have a cool relationship with. I think it’s the idea of wanting to create a whole vibe that feels good where you and I can be friends.”

In only a few months, Claire’s writing and artistry has made great bounds. “What’s cool about writing is you can get better at it if you do more of it, which is true of many things in life,” she says. “Since January, I’ve been doing music full time, and that’s given me access to writing more, not just for myself but for other people, which is something that I really love doing. In that regard, it’s been really beneficial to grow that skillset and understand what I like in other people’s writing more and trying to reverse engineer it into something I like as well but is more personal and intimate to me.”

Her new EP is something special that meshes together all the creative impulses that make up the tapestry of Spill Tab’s sound. It almost came together by accident, though, as she explains. “It came about when I was writing on single songs, and by the fourth, fifth, sixth one, I was like, y’know what? This will sound good together. We can package them together in a nice little situation. I still haven’t wrapped my head around the idea of launching a project knowing that it’s going to be a project.” In comparison to ‘Oatmilk’, it’s a real step up. “This one has a bit more bite than the last one did,” she says. “It uses more distortion and is a little grittier. I’m getting more comfortable with songwriting.”

The EP also features lots of cool guests. Guests who all share the same creative spirit as Claire in Jawny, Tommy Genesis and Gus Dapperton. “The fundamental project of Spill Tab has been built on collaboration starting with Marinelli [her long-time chief collaborator, David] and I,” she says. “That collaborative spirit is always part of it. It’s cool that I get to share for the first time songs with other artists that I’m a huge fan of. It’s been very fucking cool to send up a song to one of these artists and get something back and be ‘holy shit, this is really good’. To be able to go damn, we’re doing this together, and it’s sort of like a little baby, a little song baby that we made together.” Ah, what a lovely wholesome message. “I’m building a family, what can I say?” she laughs.

Her grounding in travel and seeing the world fostered a real creative impulse in Claire that she brings to all her work. “The idea of experiencing so many different kinds of cultures and people has made me want to deeply want to continue to explore new places. It’s a hunger for wanting something new all the time,” she says of her restlessness. “I’ve never really settled in one place for a long time, both with my own body but also my mind as well. I’ve lived in LA for three years now in the same house with the same people, so it makes me need to get out, move, and talk to new people, which is similar to how I always want to try new things in music.”

Claire’s songs are very distinct, and she has a conceptual theory as to why this might be. “I just wanted to write songs that I myself wanted to listen to,” she explains. “Which I think is why they’re pretty short. I like the idea that instead of the length of a song being represented on the x-axis in terms of time, it’s represented on the Y. Instead of adding a new element to the last chorus, we’re going to add a new element to the first chorus. It’s the idea of building up on 1 minute 30 or 2 minutes where every time you listen to it, you can hear something new. In that way, the song can continue past those two minutes. It’s more vertical than it is horizontal.” That’s some deep thinking. Another talent for you. An amazing songwriter and a philosopher too.

There have been a few special songs already in Spill Tab’s short career, but her new EP features the song that best encapsulates so far what she’s saying as Spill Tab. “I really like ‘Pistolwhip’ because it’s like one of these a-ha moments. It’s a really cool meshing of acoustic, organic sounds and an electronic sound, and I think, in general, that’s what I really like hearing. That was a really cool moment sonically.”

It’s obviously very early in Spill Tab’s career, but there’s no harm in thinking about your legacy. “There’s this part of you that’s like it would be sick to produce for other people down the line. I’d like to have acquired those notches on my belt to help those people just starting out,” she says. “A part of me wants to continue in the music and entertainment world, but a part of me thinks it would be cool to be one of those artists that disappears off the grid and moves to Costa Rica or Spain to have a coffee farm and 18 cows. That would be kinda fly. Maybe I could do both. The locals in Spain will just know me as this crazy woman down the road that has all the farm animals in her house,” she laughs after spinning a typically imaginative tail.

So, before she disappears off to Spain forever, we need to cherish Spill Tab while we can. She’s already smashed her debut London show and is about to go out on tour with Gus and Jawny. There’s one thing you won’t catch her doing on stage just yet, though. “I’m so deathly afraid of the idea of one day stage diving, but I’m not stage-diving anytime soon,” she says. Maybe she has a bigger plan, though? “I’ll get into a harness so I can fly over above the audience,” she laughs. With the possible ability to take flight, Spill Tab can do it all. See, we told you she was talented.

Taken from the November 2021 edition of Dork, out now. Spill Tab’s new EP is out later this year.