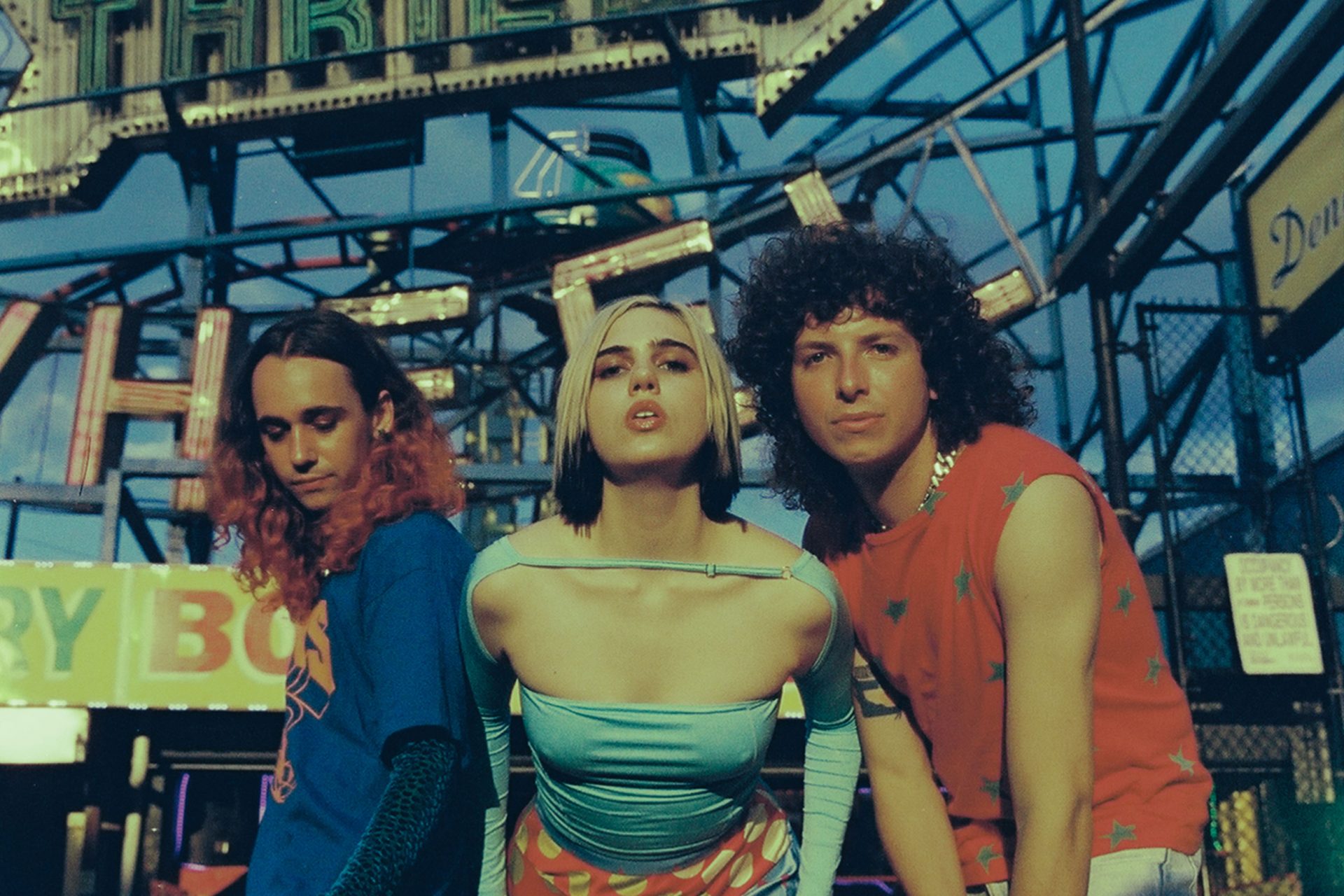 Sunflower Bean have never been slouches, but their latest full-length ‘Headful of Sugar’ is something altogether different.

Don’t be deceived by the soft strumming that introduces Sunflower Bean’s third album, ‘Headful of Sugar’. They’re not here for tenderness. No, they’re here for a riot. And they want you in the centre of it.

‘Headful of Sugar’ acts as an explosive invitation to embark on a night-long full-pelt rush of an adventure with the trio. All neon-lit corners and breathless pounding on pavements, it’s a pleasure-seeking reflection on how nothing is certain. You may as well embrace reckless abandon. Begun in May 2020, when that apocalyptic feeling was at its peak, there was a resounding sense that the opportunity to tour or release an album would potentially not come again. With the possibility that this may never see the light of day rampant, the ability to completely let go and push the boundaries of what they might make naturally came to pass.

It’s a difficult balance to strike: one in which that need to go hell for leather is adequately captured while maintaining meticulous care. In striving for that elusive middle ground, they found themselves working more and more intimately. “It became very small,” Julia explains. “It became the three of us recording at our home studio and working with Jake Portrait, who we had worked with before. I think the fewer people that are involved actually means it’s the truest you can get to what you and your little collective are trying to do. It became very old school and cool in that way, even though we were definitely trying to make different choices that aren’t based on typical or trendy indie stuff.”

The band have never been one to be pigeonholed into a genre in that sense and especially not on ‘Headful of Sugar’. It absorbs a wealth of influences and spits them out in an undefinable form: regardless of how they might vary, every track is bound together by the thematic high they chase. The album is fundamentally fearless: there’s never any diffidence or reluctance to try something new. Instead, they embrace the thrill of pushing the boat out and hit you hard, something that is reflected in the album’s whirlwind 35-minute runtime. “It’s supposed to come at you, and the lengthening of the experience might take away from the power of the experience. I think a lot of the record is influenced by where music is at right now and how people listen. 35 minutes of tight, powerful music feels like the right thing. We wanted everything to be in place, and if it wasn’t there, it didn’t need to be there,” Julia asserts.

In part, they achieved that by having their recording process mirror the impulse that their lyrics pay heed to. Drummer Olive Faber muses: “The whole recording process was just letting your inhibitions go. It was a lot of one-takes and not mulling over things for too long and letting the feeling get sucked out of it. There are so many actually magic, special takes on this album. I think it’s the first time we’ve achieved that in a larger way.”

“We tried to be really in tune with capturing magic when we felt we had it rather than trying to force the record into being something we didn’t want it to be. Our priority was the feeling and the energy,” adds Julia.

“Recording studios now are just where creativity goes to die”

This was also aided by Olive’s newfound skillset – stepping up as engineer for this album, she allowed ‘Headful of Sugar’ to come to life in an environment that facilitated its freeing nature. “I think it’s the most personal Sunflower Bean record we’ve ever made and the most personal to us three,” Olive reflects. “Sometimes I say this record was produced twice because we would write, record and produce a song that is just totally us three in our own insular world. Then we’d send that to Jake [Portrait, the band’s producer], and he’d filter through his brain and curate it like that. I think we’ve always wanted to do this – I know I’ve always wanted to do this. It felt strange. Being able to write but not record is like being able to speak and not write. Now that we can actually capture what we’re thinking on our own terms, it opens the door to much truer music to us.”

Recording at home proved to be nourishing to the trio’s creativity. Being able to walk downstairs and have the opportunity to create immediately at your fingertips and have the capacity to play around without any restraints clearly leant itself to more explorative, instinctual sounds. “I feel like recording studios now are just where creativity goes to die,” Nick laughs. “There’s too much gear; there are too many people. There’s a ticking clock because you’re paying for every single hour that you’re in there. Everyone’s on high alert, and it’s high emotions. Whereas when you can just wake up and have all the gear set up in your living room, you can sit and think for two hours before you have to do anything. That’s a better place to create.”

While eventually finalised between other studios and notably the esteemed Electric Lady, that added autonomy and pressure-free space to innovate was crucial in making of ‘Headful of Sugar’. The help of Jake Portrait, too, allowed the band to focus on what they were trying to achieve – “he really was a huge part artistically in that happening” –  and the result is a thematic wonder. It’s tight and expressive and revels in its own liberating energy.

Having those resources at hand also proved fruitful in getting those more difficult feelings lingering in the band’s minds into a turbulent track. For Julia, it offered a chance to work her way through those moments. “I’ve definitely felt a lot of times in my life that there was something I needed to say, and words didn’t make sense to do it, or when I tried to explain it, I never got the point across. When you’re able to make music about what you’re experiencing and how you feel, it’s a privilege and a way to express part of your soul. ‘Otherside’ came about when I was dealing with these really, really bad feelings of loss and pain for a bunch of months through the pandemic. I went downstairs to the basement one day, and Olive was playing on the keys. I picked up an instrument, and within thirty minutes, all the words were there. The melodies were there, the concepts were there. I never really felt like I had to explain it again. Once the song was made, I was like, ‘that’s me, that’s how I feel’, and that lives forever. It was like closure. Writing and being a musician is certainly a way to reckon with life, and I feel lucky that I’ve been able to be a musician and in love with it for this long.”

The track in question is a spacey, muted moment where those feelings take precedent. It’s questioning and seems to take place at a distance, with Julia’s vocals completely enthralling for every beat. It’s a rare pause for tranquillity on the album when everything else is so high-stakes and pressing. If the majority of the album is a rapid plunge down a water slide, ‘Otherside’ is a hazy jaunt down a lazy river.

‘Roll The Dice’ quickly follows, dialling up the vehemence on a track that feels like the epitome of the album’s mission: it’s relentlessly ambitious and seems to ignite a fire that continues to blaze throughout the rest of the album. The indignant need for risk the album dwells upon repeatedly lays the blame on late capitalism and examines how that fallout impacts the people living through it.

“We had a really amazing week where a bunch of really important songs for the record happened super quickly,” Nick elaborates. “’Headful of Sugar’ and ‘Roll The Dice’ all happened in the same week. ‘Roll The Dice’, we finally realised that the song has this really grey zone of where the sincerity in it is. It’s extremely hedonistic; it’s extremely in the mindset of capitalist grind – do what you got to do to survive. But it also has this layer of cynicism. I think that’s the coolest thing about the song – it makes you grapple with the fact that you can on paper believe all these things and be a socialist or a Marxist, but in your heart, you still have to live within whatever confines you’re put into. You have to compete with other people, you have to make money, and you have to do what you gotta do. The part of you that is such an overachiever and wanting to win and competitive – that’s the power of the song. It gets into that psyche of the right way to live your life and the wrong way to live your life and trying to make what you can of it.”

It adopts true classic rock forces to deliver that elaborate message, cementing the band as some kind of rock star figures for a new age. They have the effortless cool and thrilling guitar licks, but they’re tuned in, politically and personally. There’s a vulnerability, a much needed and valued chip in the mask of impenetrable sophistication. “We wanted it to be a personal thing, the lived experiences and all these personal anecdotes that play into this bigger picture of what’s going on in the world,” Nick illustrates.

Through that lens, the need to get lost in that wild, audacious streak feels more important. As everything shatters and fractures into varying levels of disarray, an album to give you a well-needed push through to the other side is undoubtedly necessary. It may lyrically grapple with some pressing issues and symptoms of society, but needless to say, it offers the opportunity to find pleasure and release. ‘Post Love’ is a synth-heavy venture into 80s-style dance-pop that is completely electrifying and creates an insatiable need to move.

“I think we just wanted to make something that was fun, and primary and visceral, instead of something that was ornate and serious. We wanted to peel everything back to what feels good. Hopefully, we ended up with a record that’s fun and enjoyable to listen to, that you can put on and get pumped,” Nick reasons.

That’s precisely what ‘Headful of Sugar’ lays on the table – it’s a hype-man in itself, every devious bassline and raucous percussive section offering you that boost. Leaning into what they might’ve once shied away from, there’s no fear on this album. It’s a guns-blazing demand to be heard. As those neon-lights flicker and the album leaves you in darkness, you might find yourself gasping for breath as the weight of its realisations hits you.

“This album was a lesson in letting go in so many ways,” Olive concludes. “Letting go is really hard, but it’s also so freeing. Once you learn how to do that, you can do anything, I think.” Sunflower Bean have relinquished control and embraced the capricious. Now it’s time for you to do the same. ■

Taken from the May 2022 edition of Dork, out now. Sunflower Bean’s album ‘Headful of Sugar’ is out now.