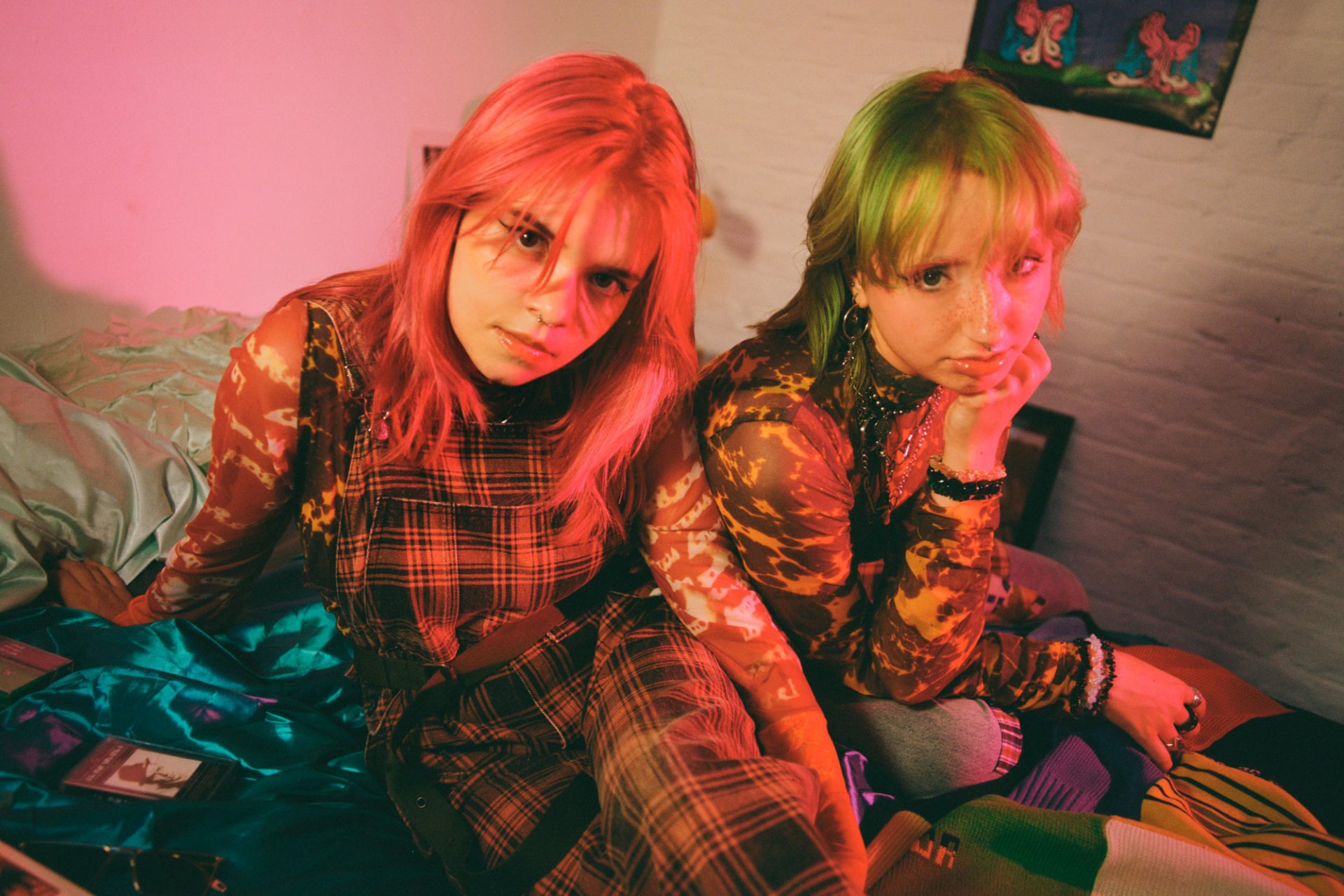 The Let Go: “We don’t want our five minutes of fame, we’re here for the long haul”

A new pop duo is on the scene, and The Let Go are rapidly drawing attention.

With a self-anointed tagline of “this is all just a trend”, The Let Go are more than your average pop duo, with origins rather far from their adopted home of Liverpool.

“We met in high school, your romanticised American high school, and started playing together when we were 16-17 in some shit pop-punk band,” lead vocalist Cole Bleu recalls of their connection back in her hometown of Washington, DC. “It felt like we jelled as soon as we met; something felt weirdly right.”

Scout, guitarist and fellow producer, chimes in: “There was definitely some universe work going on there.”

A few years later, the pair have got to know each other properly by moving in together across the pond, and it’s been something of culture shock. Attending Reading, their first-ever music festival, was a major surprise for newbies to the literal field. “Going to [a festival] felt super strange, but it also seemed like it’s part of the culture in the UK,” Scout observes. “I felt like I had to take three showers afterwards.”

Going on this bold journey together has helped both musicians evolve on a personal level, but also through their music which has changed drastically since those early days. “It’s definitely become a lot more honest; it’s easier to write just because we’re so close,” Cole comments, while Scout reveals that when problems do occur, “we can just go up or down the stairs and yell for each other.”

Producing their own music through an in-house setup due to the wonders of modern technology, The Let Go are keen to keep evolving as they go through constant experimentation that allows learning through the development process of each song. This raw approach has allowed their creativity to flourish beyond the boundaries of the studio.

“I’ve worked with a lot of people who are very experienced in the music industry,” Cole explains. “That’s great, and they have a lot to offer, but also music is so subjective. You don’t know what sounds good; it’s just what sounds good to your ears. If you want to push buttons or do something different that others haven’t done, run a sound through something that it’s not supposed to… why can’t you just do it?”

Perhaps the main benefit of seizing the production reigns is that The Let Go are able to blend their glossy, glamorised American influences with the authentic grit of Merseyside. “We take inspiration from BROCKHAMPTON, Remi Wolf, Dominic Fike… all these cool people who are so raw and real while living amongst palm trees,” Cole says. “We like to incorporate that energy in some way and hope people find it captivating.”

When asked why that vibrancy appeals to us Brits, Scout reflects: “The US is oversaturated with people trying to capture that aesthetic. We already had that vibe going for us as a baseline, but after coming here, it’s definitely morphed into something even newer – it’s a combination of the two scenes.”

An unforeseen consequence of the move was the discovery of the immense passion lying barely beneath the surface of the UK industry; a true commitment to new music, original art and the joy of sharing it. “That was a major moment for me, realising that we can really do this because people do actually care,” Cole gushes. “That was a big learning curve; I thought people wouldn’t care until you get to the top.”

Now making not steps but strides forward with their music, The Let Go are sure to start rising up those ranks exponentially. Following a signing to the tastemakers at Chess Club Records, a new single in the form of ‘Woke’ reinvented the band’s signature sound. It provided a galvanising reinvigoration of their indie-pop style. “It was one of the first things we wrote when I got [to Liverpool], so it was really us taking matters into our own hands and finding the start of our most authentic art,” Scout describes of their first entirely self-produced effort. The deftness of the duo’s unique touch is evident.

Through a whirlwind of gentle vocals, sharp lyrics, rumbling guitars and bouncing beats, a twisted view of self-acceptance is smartly navigated under a vibrant and euphoric façade. “Everyone online is about self-care, meditation, self-love, doing all these things just for you, and you’ll have the best life. It’s such bullshit,” Cole clarifies. “Not everyone can live up to those standards, and so I’m saying it’s only a trend to love yourself in that way, but will it make me more ‘woke’ if I do it? It’s about taking the pieces of yourself and trying to love them.”

With a completely contrasting listening experience arriving in the form of ‘02 Vegas’, The Let Go continue to subvert expectations. A second EP is looming over the horizon, and there is at least one thing that the catalyst ‘Woke’ has established as vital to the band’s very essence. “It’s the lyricism, just being honest and open,” Cole shares. “That was a big step forward for us and makes people gravitate towards our stuff more. That’s definitely the case with the stuff you’ll be hearing next.”

The goals of this exciting project don’t end at just honesty, though, as the pair declare grand ambitions. “Our intentions as a whole are to make a difference in the world,” she continues. “Growing up, we didn’t really have a relatable influence to grab on to, being women in the industry.”

“Only major ones, so they get thrown at you so much that you get sick of them at a certain point,” Scout expresses with an understandable amount of frustration. “There’s no one doing specifically what we’re doing, so we hope we can be that for someone; to become that ‘women in the industry’ story without having it thrown in your face. We want to be where we are because we deserve it, because we sound good enough to be heard, and not just because we’re just women.”

Part of achieving this success is to approach it with a long-term mindset. “We sit down to write a song and ask: in 20 years, will people want to listen to this?” Cole questions. “We don’t want our five minutes of fame, we’re here for the long haul, and that’s something that’s super interesting to us. People focus on the next thing that they do, but that’s not always what is important – the focus should be changing the world and the industry because we’re women, and we can do that.”

“It’s not about thinking ‘I’m the shit’,” Cole concludes. “It’s about thinking: ‘I have something to say’. We want a community that can hopefully change the industry for the better. So look the fuck up – if you want to come on this journey, you can.”

Taken from the November 2021 edition of Dork, out now. The Let Go’s single ‘Woke’ is out now.