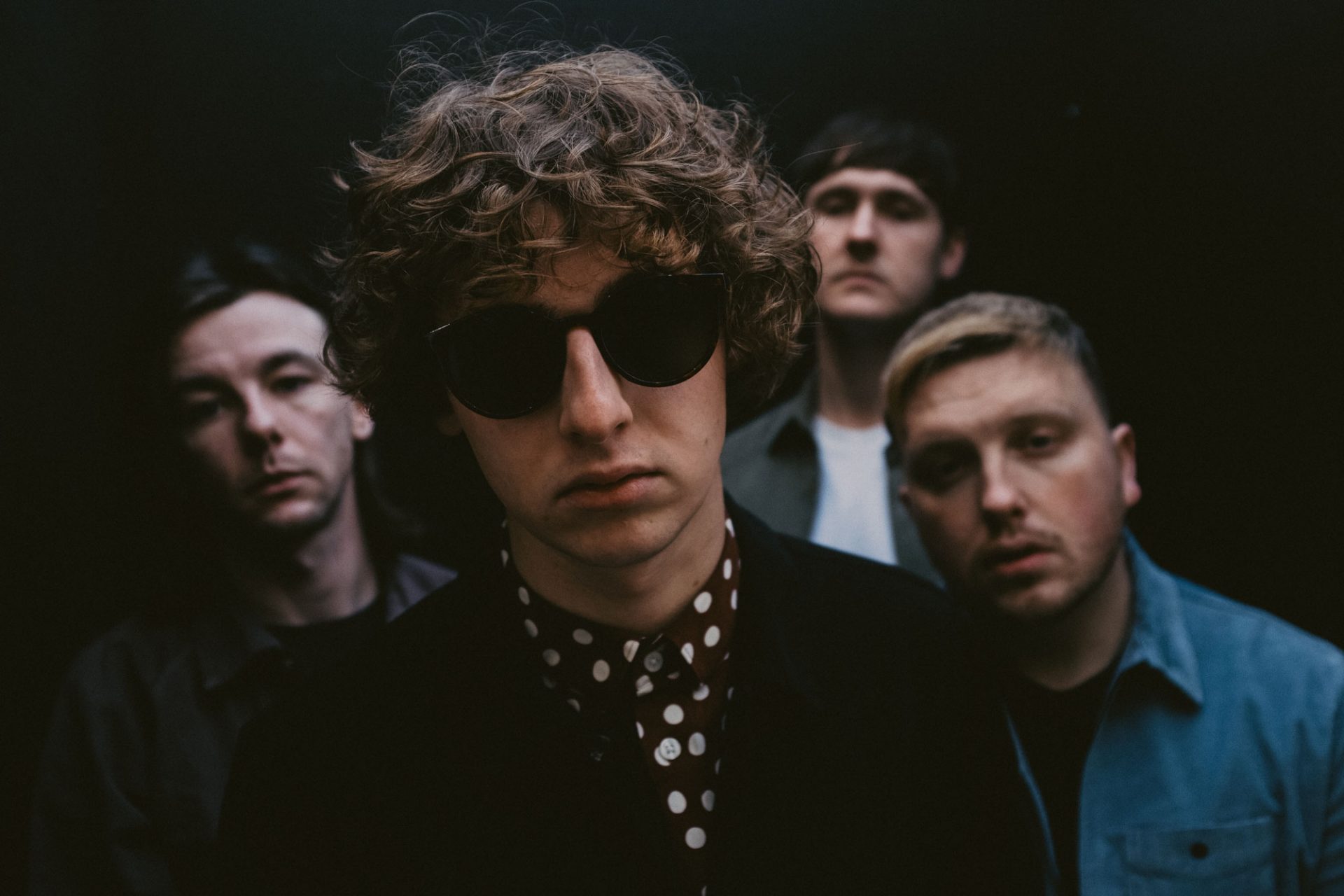 The Snuts: “We’ve even sampled elephant noises from YouTube”

After landing a Top 15 album chart position with their debut ‘Mixtape’ EP, Scottish indie rockers The Snuts have unveiled their debut album proper.

The Snuts have been building their following over years of writing, recording and rocking out venues. The time has finally come for them to unleash their first full-length, ‘W.L.’, and they intend to smash the dwindling expectations that can suffocate and pigeonhole hordes of aspiring indie-rockers.

The quartet have been working hard to produce an ambitious discography. Under the helm of songwriter, lead singer and guitarist Jack Cochrane, their songs have been delving into riskier territories as of late, as he explains with a twinkle in his eye from his home in Glasgow.

Having been raised on a healthy diet of Bob Dylan and Joni Mitchell, Jack’s priority has always been to show his strength as a serious songwriter, and he’s keen to emphasise the significance of bold decision making in ensuring this comes across.

“Young musicians should be encouraged to take risks and have freedoms with their music,” he explains. “People should stop putting brackets on them and telling them they have to make certain types of music. because that’s how you end up with a music scene that nobody prospers in.”

Perhaps this bold attitude has ensured their success up this point; the band’s music has undeniably evolved since debut single ‘Glasgow’. From both a songwriting and production perspective, Jack says he “never meant to go as far as I did on this album, but I’m glad I did – on ‘Elephants’ we’ve even sampled elephant noises from YouTube and played them through our guitars, just crazy shit man. Production is something we always wanted to experiment with, and working under someone with experience in crazy sounds makes you realise the things you can get away with doing, we just need a nudge in the right direction.”

It is lucky then that the band have been guided by a range of producers in studios at home and abroad to master the tracks they’ve been slowly compiling. Working from Glasgow and London to New York and LA, The Snuts proudly declare “we have taken advantage of every opportunity we were given whenever people wanted to work with us. We went for it, even though some of the producers could’ve been risky options, and we’ve learned a lot about what we can do.”

In the aftermath of recent political changes, it seems as though this approach could be harder to sustain in a future where working visas are to become a requirement. The lack of consideration for their industry is an issue that The Snuts hold dearly, with the absence of support during the pandemic making this ever more important for both established and aspiring artists.

“I think the governments in Westminster and here in Scotland are just completely ignoring musicians, artists and our entire sector quite blatantly – if they’re not ignoring us, they’re offending us. We wrote an open letter to Nicola Sturgeon back in August 2020 but received no reply, and I’ve written a letter to her every day since. There need to be conversations about how we get our industry back on its feet, and I genuinely feel that if we don’t push for that ourselves, we won’t be given it,” Jack expresses.

This push for change is a common theme and essential trait in a group of four lads that have been evolving together for over a decade; after performing as a group since they were 15, they share a strong camaraderie both on and off-stage.

“We have such a bond on stage, that’s what I miss most about not being able to gig at the moment. It’s something that brings us all together, and we all ride the same wavelength. Everything’s easier when you’re with friends. We’ve spent our whole lives making music together, and all that hard work has a huge payoff.”

One way that payoff can be seen is with their ‘Mixtape’ EP, which hit Number 14 in the Official Albums Chart – a welcome surprise and one of the few positives of March 2020. “There are a couple of tracks on that EP that I thought were certainly bolder than our older stuff and I was surprised people didn’t jump off our boat at that point. That’s the good thing about doing whatever the fuck you want with your music, people expect the unexpected with each new release, and that opened the floodgates for us to be able to take further risks.”

This outlook can easily be misinterpreted as arrogance, particularly when songs like ‘Don’t Forget It (Punk)’ accentuate this mindset, but it is clear that this is far from the truth. As Jack clarifies, “I’m usually pretty reserved and focused, but the stage is a great place to slip on that confidence and embrace the swagger to sing those songs – that’s what fans have come to expect, and I’m very happy to give it to them. I’ve wasted a lot of my life lacking that confidence, so now I just go for it.”

In fact, some of the hardest hitting moments hiding among their tracklist rely not on volume but almost solely on the persistent backbone of Jack’s deep-delving lyrics and raw vocal delivery. Among alt-pop bops and fast and aggressive rock tunes, they’re not afraid to stop for a ballad or two.

“Sometimes it can be easier to tell a story when you don’t add too much to it and embellish it with too many instruments,” Jack says. “I started out with just me in a room on an acoustic guitar, so it’s nice to have that side represented still. I felt like I could use my own voice a bit more in that way and say the shit I actually wanted to say.”

As he says himself, the darker thoughts in the back of Jack’s mind are manifested in songs such as ‘Boardwalk’, which, “for such a dark and sad song, has a hopeful, positive, resilient message within it, which is something we try to sneak in as much as possible. Even if a song is super sad, it doesn’t have to have a negative message – there’s enough of that in this world, that’s for sure.”

Despite all the expectations and frustration of the rock star lifestyle, he has clearly maintained a positive and constructive ethos, which is easier said than done in a position where the eyes of fans, record label executives and even fellow band members are often on you. “The only pressures I feel are the ones that I put upon myself. Waiting for inspiration to strike can be my main frustration, and that’s almost worse than outside pressure!”

As a young man in the 21st century who is promoting his art, social media has been something of a necessity at a time where face-to-face interaction is regulated – and this is something that Jack once again can flex a mature perspective.

“Musicians used to be able to just play music, but now how you come across seems to have become the main priority – even before hearing your music, people want to know who you are. Social media is something you should feel no pressure from in life because it’s just unhealthy to do so. Be it a band, a business or just a regular user, one way to crush all your dreams is to put your faith into social media. We try not to overdo social media and just be ourselves, and thankfully it’s let us stay connected with fans during this pandemic.”

Navigating such complicated waters shows the grit and resilience that The Snuts have built with hard work. If good things come to those who wait, then fans will have one hell of a gift when ‘W.L.’, named after their youthful nickname Whitburn Loopy, drops. With multiple sold-out live shows also scheduled for later in the year, there are high expectations on these multifaceted, sometimes thunderous and sometimes understated musicians.

A debut is a statement of intent; the first cohesive work that often establishes a career. With that in mind, ‘W.L.’ has been crafted as “a catalogue, a timestamp of what it’s been like for us growing up and getting to this point with our music and where it’s at right now,” Jack explains. “I want people to be able to see our growth from the very beginning of The Snuts, and be able to break down some of the more pressing issues that we write about, which will hopefully open up some positive conversation.”

What do the group have left in the tank? “Anything and everything. We never go into a song thinking ‘this is gonna be produced a certain way’. We’ve never chosen just one direction and stuck to it.”

The Snuts are originally from Whitburn, West Lothian. Here’s some facts.

Quite a few musicians ‘of note’ are from there. Namely, Lewis Capaldi, Iain Cook from Chvrches, and even former X-Factor winner Leon Jackson. How’s that for a bumper crop?

They also have some cracking bands! The Whitburn Band – a brass band formed in 1870 – have been Scottish champs on 19 occasions. There’s also a Whitburn Flute Band, if you prefer something more windy.

It was a fashion capital. Whitburn used to be the home of Levi’s – the plant opened in 1969, employing 500 people, and at its height made 4 million pairs of jeans a year. Unfortunately, it shut in 1999.

They know how to have fun it Whitburn! The town holds its annual gala day on the third Saturday in June; there is a parade through the town, followed by games and races at King George V Park.

They’re not twit-twoos, either! Since 2012 Polkemmet Park – located to the west of the town – has been the site of the Scottish Owl Centre. As well as our feathered friends, it also has a giant owl shaped slide! Winner.