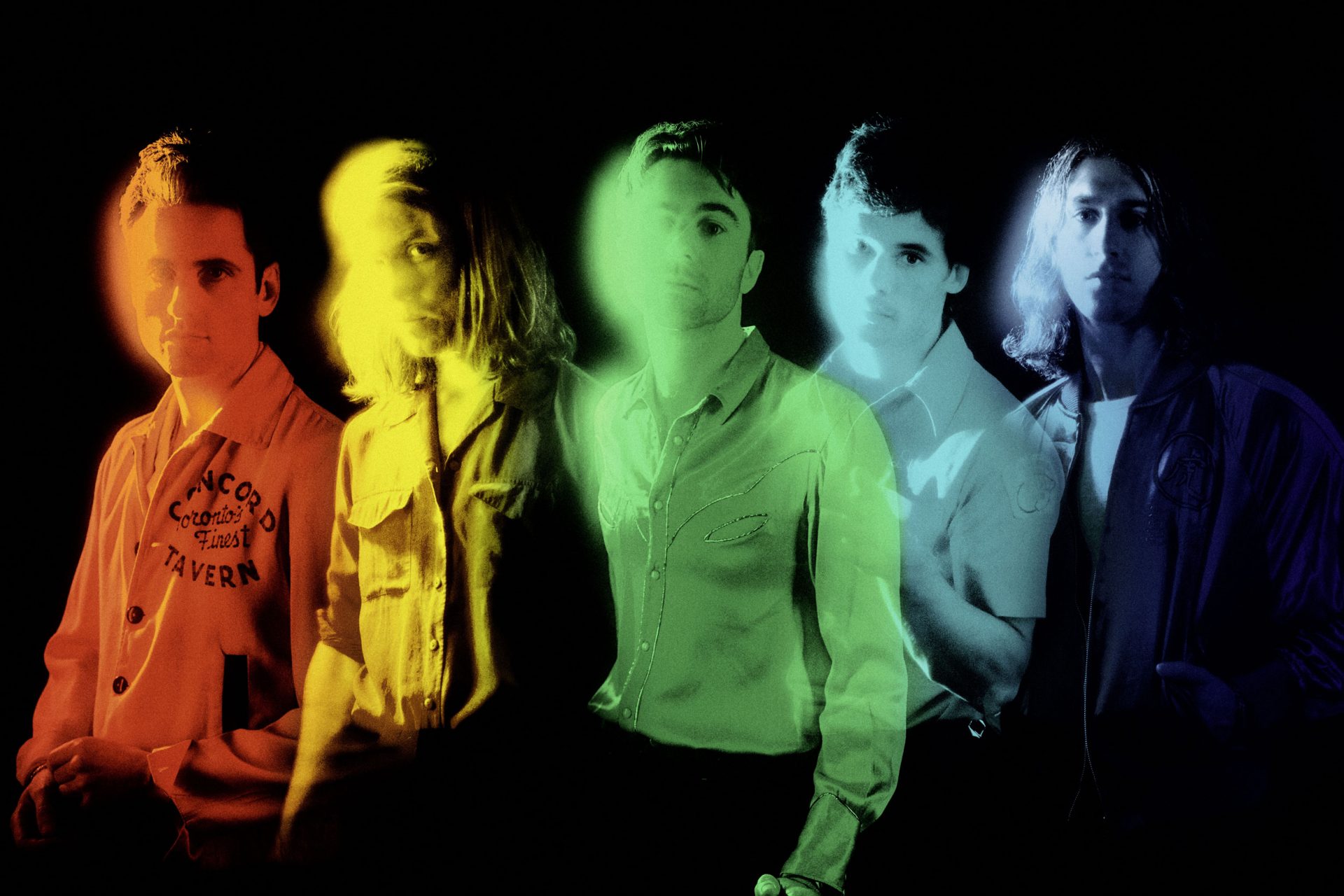 The Vaccines: “I really want it to feel like a hopeful, infectious record”

Feeling penned in by everyday constraints, The Vaccines’ new album ‘Back In Love City’ sees them trying on different lives and fictional places for size.

When thinking about the inception of The Vaccines’ fifth record ‘Back In Love City’, imagine frontman Justin Young cruising the streets of LA in a fancy car, on his way back from the gym and headed to a swanky apartment. Except it’s not his car, and it’s not his house. Nor is it his gym membership.

No, the brains behind one of the UK’s most beloved indie bands didn’t develop a kink for burglary and joy riding since the release of their last album [2018’s ‘Combat Sports’]; he did a house swap with a random stranger halfway across the globe.

“Daniel [Ledinsky] who produced the record was living in LA at the time, so it’s fun to be out there. I [thought] there must be a cheaper way of doing this, [so] I found this website, I guess it’s like a dating site. You find out all about a person’s personality, and then you send a message saying, ‘You look amazing’,” he laughs.

“I found this guy with a nice loft in downtown LA, and he came and lived in my house. It’s awesome. I drove his car and used his gym membership. I left my life pretty much under the mat for him. And he did the same for me. We probably passed each other, somewhere across the Atlantic.”

And as if the story couldn’t get more romantic, there was one more twist of serendipity waiting for Justin.

“At the end of it, I was like ‘I’m leaving now to Texas to work’, and I guess he knew I was a musician because he’d been in my house. He’s like, ‘oh you’re going to Sonic Ranch; I lived there for a month as a videographer for an artist’. He used to work at a record label; he was like one of probably only about 400 people on this planet that even know where or what Sonic Ranch is.”

The story of Justin’s life swap shows how intimate interactions, like letting a complete stranger drive your car and sleep in your bed, are becoming ever more transactional. It’s a concept that inadvertently provides the crux of what ‘Back In Love City’ is all about.

“I wouldn’t call it a concept record. I was fighting that a little bit. To a degree, it’s conceptual. I’m not sure it’s one of those opuses,” he admits.

“‘Back In Love City’ is a song on the record, and when I wrote that, I was like, what does that even mean? And then I was like, where is that? What is it that fell out of my mouth? We started to riff on this idea of Love City being this place, or it’s a dystopia or utopia, I’m not really sure. Funnily enough, when I was doing the house swap, this big climate march went past. I was watching, and I was thinking about Love City; what if emotions had finite properties? Maybe we might run out of emotion.”

“It’s not just love that you go to find,” he continues. “It’s any array of emotions or feelings. Love is a reductive word. It’s impossible to say what love feels like, or what hope feels like, or hate feels like. It’s basically impossible to condense that down into one word. It’s almost like there’s no direct translation, because actually, it’s a completely different thing for everybody, depending on who they’re thinking about. That goes for any emotion and feeling. Any song or any feeling could fit into this world. I’ve always been into assessing the idea of connection and disconnection.

“When we were writing this record, we were having so much fun being in the band and really into what we were doing. I felt a real sense of excitement, hope and positivity. I was thinking a lot about rock music and indie rock music. It gets a slap on the wrist for lots of things. The thing that winds people up about it is that it does take itself quite seriously. I really want it to feel like a hopeful, infectious record – like you can’t begrudge them. It sounds like they’re having the time of their life.”

‘Back In Love City’ was recorded at the famed Sonic Ranch, the world’s largest residential studio complex, sitting just outside El Paso in Texas. Though the gadgets inside didn’t phase Justin, it was what was going on outside the recording rooms that proved more compelling.

“I’m not someone who’s into studios, equipment, or anything like that. It’s pretty hard for me to get excited about studios; they’re kind of nerdy and windowless rooms. If they’re in a cool city, then that’s an appeal to me. [Sonic Ranch] is on a pecan farm on the border with Chihuahua, Mexico. There’s a lot of intensity; there’s a lot of death and destruction caused by the cartels that you see on the American side, because a lot of the people working on the farm and in the kitchen in the studio all live on the Mexican side of the border. In Tornillo, the town where the studio is, is where Trump had his internment camps. There’s a lot of sadness; there’s a lot of darkness. But amongst all this is this amazing place with amazing people that you don’t leave for weeks at a time. It’s a beautiful environment; you see the desert and the mountains. You do feel like you’re checking into another world.”

‘Back In Love City’ is painted boldly with cinematic and euphoric soundscapes, and twanging guitars that amp up the band’s penchant for rockabilly, which was only bound to happen when given the wild west-esque environment in which they were recording.

“I think that people will assume because we’re in Texas, that’s the stuff to make a space cowboy sounding record, and actually we went to Texas because it was already sounding like that.

“Every time you make a record, you’re trying to push these borders down. You’re trying to get better, and you’re trying to stay interesting and interested. You’re aware that you’re slightly being held hostage by your back catalogue, and it’s that constant trade-off or that balance. Primarily, I’m always thinking, what’s the through-line? In 20 years, and I look back, what did every The Vaccines record have? How could you describe The Vaccines in three words? We’ve always been searching, and I’m not sure we necessarily always found it.

“Obviously, there’s that frenetic energy, and there’s that euphoria. That lends itself quite well to the cinematic arrangements. If I think back to when we were first starting the band, and we were writing for [the debut], pretty much everything we were listening to was surf rock and rockabilly. So it’s always been there. If I think about ‘I Always Knew’ from [the band’s second album] ‘Come of Age’, I actually think that sounds like the same band as the band playing ‘Paranormal Romance’ on this record, like a continuation of that.”

2021 marks the release of a new album for The Vaccines and the ten-year anniversary of ‘What Did You Expect From The Vaccines?’ which became one of the most successful records of that year in the UK. When reflecting on that time, and the time that has passed since, the sanguine narrative traversed on ‘Back In Love City’ becomes ever more believable.

“We only felt comfortable [celebrating the anniversary] because we had a new record coming that we were really excited by. If there was nothing new, I don’t think we would have made a noise about the fact the first record was 10 years old. Every time we make a record, it feels like making a record for the first time. You’re aware that you’re The Vaccines, and you’re aware that you have a past. But I think as much as anything, you’re like, we still have a present and a future, and what does that look like?”

“When The Vaccines first came to the attention of the world of music, there was this intense hype around everything we were doing. As a result of that, we felt very insecure, very anxious. We’re very aware of the fact that not everybody agreed with all the great stuff people are saying about us, and there’s a sense of imposter syndrome. Coupled with no sleep for like two years, we were pretty fried. If I could go back, I would tell myself not to worry so much and enjoy it more. We spent way too much time worrying about what people didn’t like about us and not enough time worrying about all the people who did. Just looking back now and realising how few bands that happens to on that scale, it’s a mad situation we were in. It was fucking incredible.”

Taken from the October 2021 edition of Dork, out now. The Vaccines’ album ‘Back In Love City’ is out now.