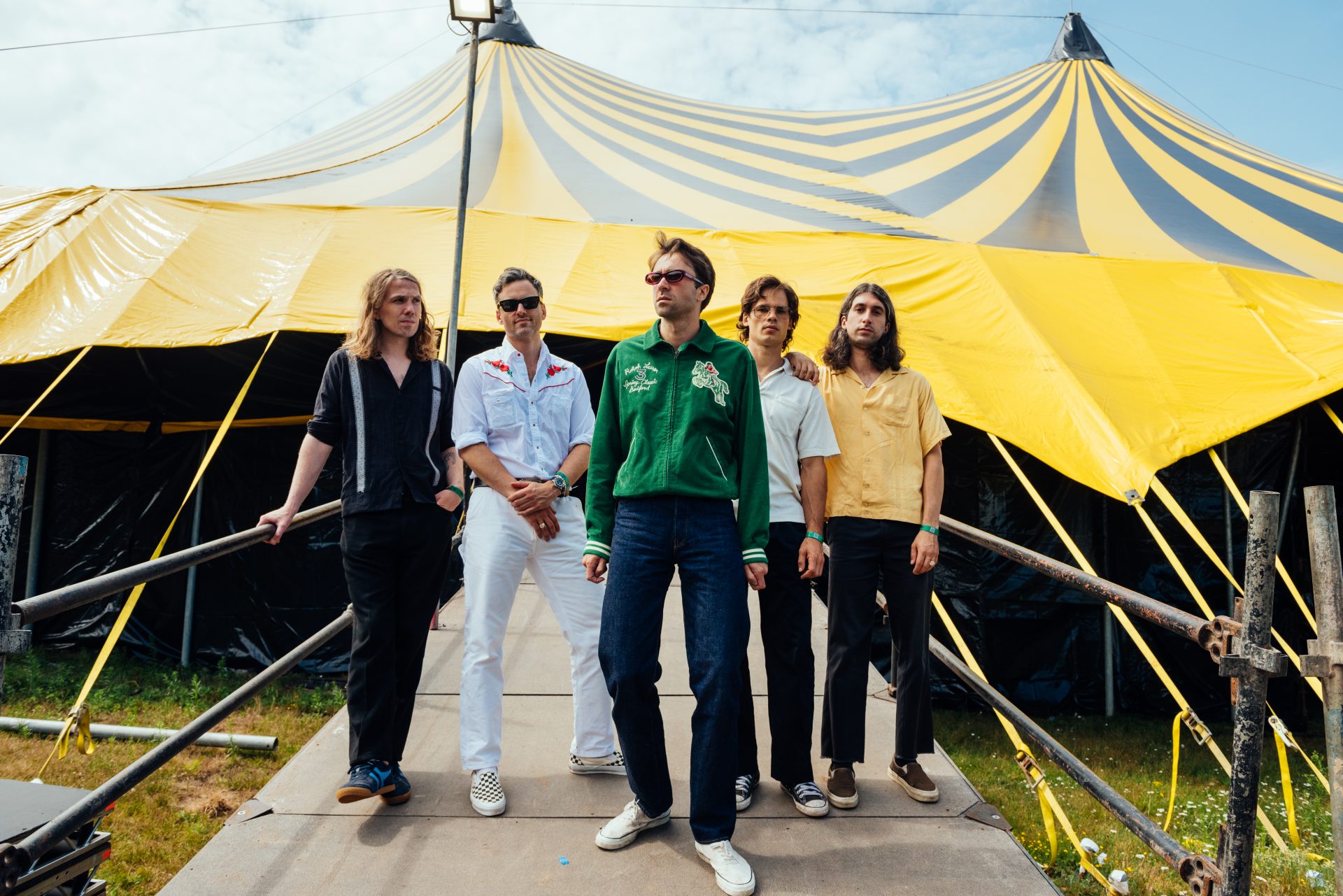 The Vaccines: “‘Back In Love City’ definitely isn’t a lockdown record”

The Vaccines are back with their fifth album.

The Vaccines, other than being a pun-fanatic’s heaven in times of late, are a relentless live force that perfectly fit the bill for any show involving high octane fun, bright sun and a cold beverage of choice. Latitude today welcomes them back with open arms for a not-so-secret set that marks the fourth show in Henham Park throughout a career that recently hit the decade mark.

However, after 18 months away from a crowd, Justin Young and Freddie Cowan express ambivalent attitudes towards their imminent return to stage. “On one hand, I’m relieved that we all got here and tested negative today,” the frontman notes, “but then I suppose there’s also some real anxiety pulsing through my veins right now.”

The anxiety is something that all festival-goers this summer will be grappling with, but it’s reassuring to note that walking into a crowd of thousands seems as cathartic as it is… normal? “It’s a weird paradox in that it’s extremely strange but also very familiar,” lead guitarist Freddie offers. Justin adds that it feels “like waking up from a coma or something; everything’s just back to normal.”

While we all wish the gig blackout was but a bad dream, it’s tough for this group to not think about the larger impact this has had: “Our entire crew are our family as much as the band, we spend as much time with them as you do together,” Justin reflects. “We never thought it’d be so long until we see them again.”

Both members struggle to recall the last fragment of a 2019 summer tour that would be their last outing until today, which is odd considering you’d expect this moment to have been replaying in their heads constantly. “Usually, with the last show of a long tour, we get off the bus, and our sanity is all over the place, which it is at the best of times – our things and people are physically and mentally trashed,” Freddie explains.

As an act with international roots, the five-piece departed from their studio in Texas in 2019, said a brief ‘see ya later’ at the airport, and then were not reunited until about three weeks ago. “We didn’t congregate again until very, very recently. We’ve all been on these crazy individual journeys since then,” Freddie says.

This is especially bonkers when you bear in mind the fact that The Vaccines were working on their fifth album, ‘Back In Love City’, behind closed doors. After the inconclusive farewell from El Paso, the band have been chipping away to perfect it for its September release. Although music in an introspective vein has flourished while music fans have been indoors, this album is one that feels like it had to be saved for a less restricted world. “When we finished it, it felt like a very fun, triumphant sounding record, and most of the ways we wanted people to enjoy it just weren’t possible during a lockdown,” Justin explains. “Be it road trips, festivals, parties, weddings, holidays… these situations where you create memories and connections with songs and friends were important to us. ‘Back In Love City’ definitely isn’t a lockdown record.”

This craving for energy and euphoria was unveiled with the first single from album five, ‘Headphones Baby’; a track that surprised listeners with its ecstatic heights of production that build upon the textures explored through 2018’s ‘Combat Sports’. “It’s a bit of an outlier,” Justin says. “That being said, it very much lives in the world of ‘Love City’ in terms of the writing, production and arrangements. I think it will be reframed once people have heard the context of the whole record.”

As a band who recently celebrated the tenth anniversary of their debut album, this new step forward maintains their legacy while invigorating it with a fresh array of sounds. “The only way an album can be a failure is if you’ve failed to excite yourself in the process of making it,” Freddie theorises. “We all have our own separate criteria for success, but a new album should always be something challenging, exciting and engaging.”

Justin adds: “The longer the band goes on, the more you feel this contractual obligation with your fandom and standom to give the people what they want while also refining what you’re doing, evolving, and finding new ways to both stay interesting and interested.”

If this incremental progression is intentional, the manifested results are at least obvious; the production ramp-up is actually only a slight growth from the aforementioned ‘Combat Sports’. By extensively touring the 11 songs on that LP, The Vaccines were able to interrogate themselves in order to discover where they wanted to move next. “What worked last time? What was fun? What ideas or processes do we want to explore further? What was too safe or didn’t work?” Justin queries. “The second you release music, the second you start getting feedback, you start pulling apart what you could’ve done differently or better. I don’t even mean that in a cynical way; it’s just a natural thing for any creative to think.”

While their own views are at the forefront, the band can’t help but listen to fans; when touring, recorded versions of each track are left behind, and new relationships are formed with songs as they are played and reacted to each and every night – in normal circumstances, anyway. “This perfect little creation that no one’s sullied or tainted… the world then receives it, and that completely re-contextualises your own opinions on it and feelings towards it,” Justin enthuses. “It doesn’t happen with blunt force; it’s something that happens very gradually over time.”

Freddie continues: “It’s a bit like having a belief system and then having to explain it to someone; you end up debating it, finding the holes and rethinking the fundamentals of how you’ve experienced that thing this whole time.”

For ‘Back In Love City’, the only feedback so far has come from forced introspection, but even that has had a heightened impact in an isolated world – Freddie states that lockdowns caused The Vaccines to take “something quite band-y and made it even more technicolour.” With multiple tracks now unveiled live, the true vibrancy of this record will soon be put through the wringer.