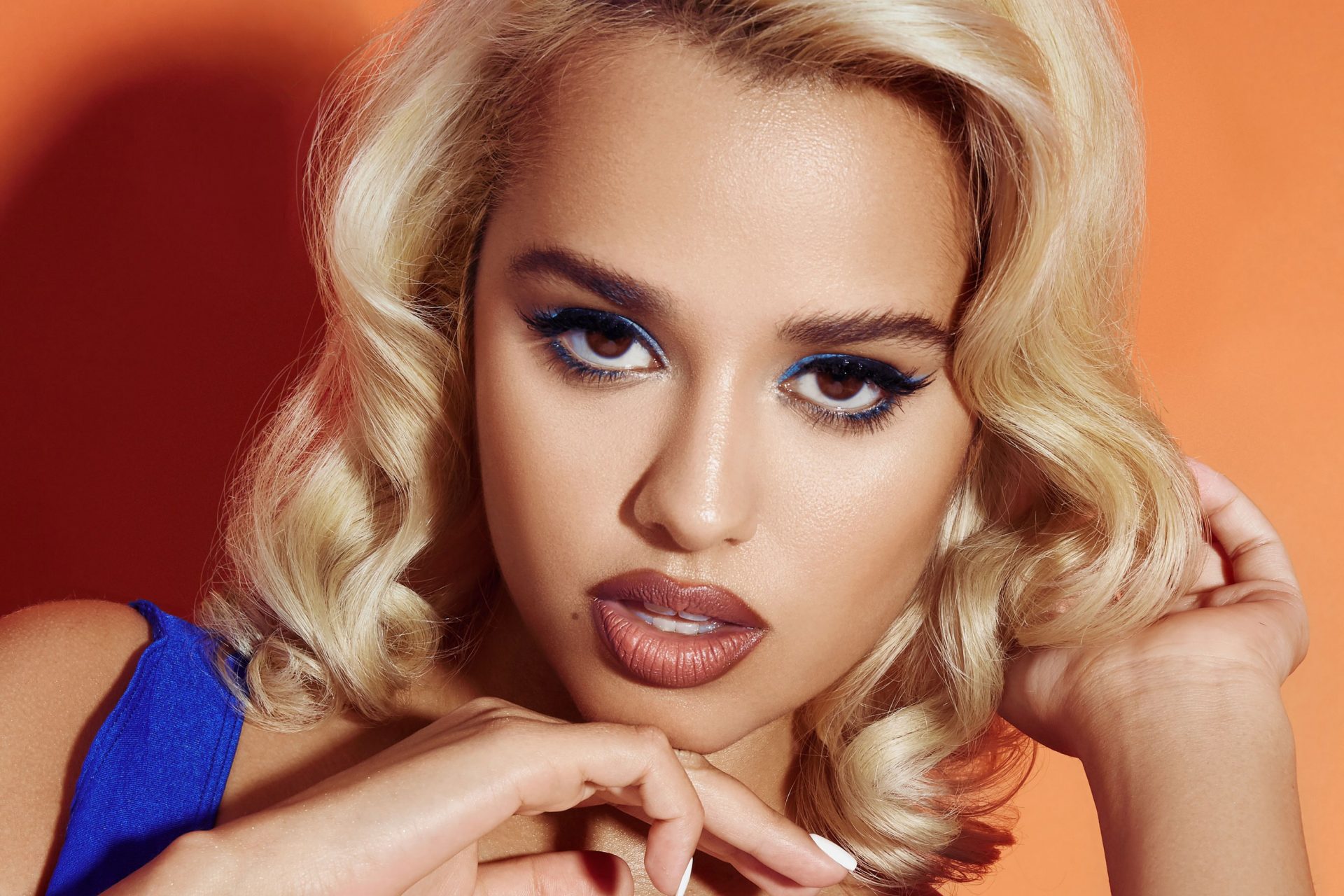 Tommy Genesis: “I just want my music to make people feel like a bad bitch”

Self-described “fetish rapper” Tommy Genesis is breaking into the unknown with her new album, ‘goldilocks x’.

Once upon a time, in Vancouver, Canada, a girl by the name of Genesis was born. She had a vision and a mission that didn’t align with what other artists were doing yet. She was effortlessly subversive, penning lyrics that’d give Fifty Shades of Grey a run for its money. In a few short years, she’d become Tommy Genesis, an underground icon, flicking her long blonde tresses across stages, catwalks and glossy adverts worldwide.

She’s living the dream, but like all good fairytales, there’s darkness before the dawn, and the world Tommy Genesis lives in on ‘goldilocks X’ is a grimy night out in sticky summer heat, one that starts with you feeling yourself and ends in tears.

It comes as a surprise, then, that Tommy’s life while recording this album was almost a direct opposite. She’s relaxing in LA with her dog and foster puppy – both of whom felt like contributing heavily to this interview – and generally just being chuffed about her life.

“It’s a nice place to be when your art kind of becomes your career, and then you can just be creative the rest of your life,” she says. “I’m also a very mellow person. I’ve definitely had my phases, but now, you know, I’m sitting in the sun in LA with my puppy.”

Tommy Genesis is extremely secretive. Emerging in 2015, Tommy still won’t tell the world her age (ideally, no one would know her gender), and she prefers to let her art speak for itself. That’s a big ask, because there’s a lot to take in.

Born in Canada to Tamil and Swedish parents, Tommy knew she was an artist from a young age. She grew up not fully fitting in but always felt comfortable expressing herself. She says there was never truly a plan for her life, but she wound up creating music after stumbling on a SoundCloud stream of Awful Records boss Father, who later asked her to feature on his track ‘Vamp’. Soon after came her mixtape ‘World Vision’, which does exactly what it says on the tin.

Following her breakout year in 2018, when she released her debut self-titled album, she received co-signs from Charli XCX, Dua Lipa, M.I.A, and Rihanna (an outstanding Christmas card list), proving her underground success and mainstream potential. On ‘goldilocks x’, she merges those worlds, making her most experimental, most pop, most danceable and most emotional concoction.

“I really liked actually, the concept of the Goldilocks effect, which is used as a theory in a lot of different things. It’s more just about something being in that sweet spot, where it’s sort of like the way gravity is with the Earth, where it’s just happening because it’s perfectly right. And for me, the album, I really liked that idea and that concept of, why is it happening? I don’t know. But it’s just perfect. It’s right. And that, to me, was why I picked Goldilocks.

“And then the ‘x’ is well, first off because if you just Google ‘Goldilocks’, you know, I’m not trying to taint childhood books with my cover. I’m like, okay, this is my concept for the album. But how do I make it unique? I added the x because x is just experimental. It’s punk. It also represents a lot of things; x is usually the unknown factor.”

On her third full-length, she’s exploring a more raw side of herself, opening up to new emotions and new genres and claiming her power. Half the record feels like signature Tommy – ballsy club bangers with bags of attitude – and the other half sees her dip her toe into something new. The single ‘woman is a god’ sounds made for the dancefloors of New York, with its deep house beat, ‘fuck u u know u can’t make me cry’ nods to the grungey pop-punk revival the mainstream is having a moment with, ‘baby’ lets her Swedish side shine as the record’s pop bop, and closer ‘hurricane’ takes the album on an emo turn.

“I love being subversive, but I also don’t try to be; it’s just my existence is subversive”

But dialling back the extra doesn’t mean she’s going boring. The influx of more organic (read: not electronic) instruments across the pop world finds its way onto Tommy’s record towards the end, particularly on ‘fuck u u know u can’t make me cry’, which feels like a sonic switch up for her. It’s a trend that she slides into effortlessly, and as it turns out, she’s been experimenting with different genres long before these tracks.

“I fucking love the end of the album, going from ‘baby’ to ‘fuck u’ to ‘hurricane’. I just feel like it’s so special because, as much as I like pop music, it doesn’t resonate as deep to me unless the lyrics really hit. I’ve always made music that isn’t necessarily one genre, and the music I grew up listening to isn’t rap music. Whatever trends are happening in the world, I’m not really sure of, but for me, it’s just a natural way for me to make music; I don’t always put music out like that. If I make songs like that, they just don’t always make the album. This time, I chose to put them on there.”

While there’s plenty of sad girl time on ‘goldilocks x’, there’s the other end of the spectrum on ‘men’. A track crafted in a group chat where Tommy lists everything she hates about, well, men, obviously.

“I literally was just like, I’m gonna write a song called ‘men’. I literally hit a group chat with a bunch of my friends in it, and I was like, ‘Hey, I’m in the studio, just send me everything you guys hate about men’. I swear to God, the verse where it’s like, ‘jealous, insecure, condescending, even when I come, I’m pretending’, I was just quoting all the funny shit everyone was sending me. I had so much help writing that song because people were like, this happened to me, this happened to me, and I was just like, man, I’m gonna put that in the song.”

Throughout ‘goldilocks x’, Tommy alludes to her own legacy. Whether she meant to or not, when she coined the phrase ‘fetish rap’, she found a definition for a new wave of female rappers taking ownership of their sexuality. The music of artists like Brooke Candy and Cupcakke, and later artists who’d hit the mainstream like Doja Cat, fit into this sub-genre, categorised by hyper explicit lyrics and heavy electronic beats.

On ‘manifesto’, she proclaims, “I wrote the manifesto so you could feel the hype”, ‘average’ has similar sentiments, and on lead single ‘peppermint’ she reiterates how she made fetish rap.

“Fetish rap is what I make because it’s not mainstream; it’s underground. It’s a niche, and I feel like if people fuck with it, they really fuck with it. And I also like the way fetish rap sounded because I would say I make art rap, but it just doesn’t hit. So I never did it to defend anything; I feel like it just made sense.”

This record also sees Tommy hit some personal goals as an artist. She often doesn’t write about a specific situation or moment, rather pulling from different feelings to create her own mood. She notes that ‘hurricane’ almost makes her cry because the feeling it gives her is so intense, and she hopes you feel it too.

“I feel like I lassoed the feeling and brought it in really pure, and to me as a writer, that’s what I’m always trying to do, is just like bring the feeling in as pure as I can, for whoever’s listening to it to feel what I’m feeling as purely as I was feeling it.

“I really wanted this album to feel perfect and not feel like you wanted something else, but also be surprised at what comes next, but after you’re surprised, you’re like excited for it to come again.”

Tommy is the princess, the evil queen, the dragon and the knight in shining armour all in one. She doesn’t need true love’s kiss, but she wants it. Unlike her titular character, she’ll have the biggest bed, the biggest bowl and help herself to the money in the safe too.

Taken from the October 2021 edition of Dork, out now. Tommy Genesis’ new album ‘goldilocks x’ is out now.