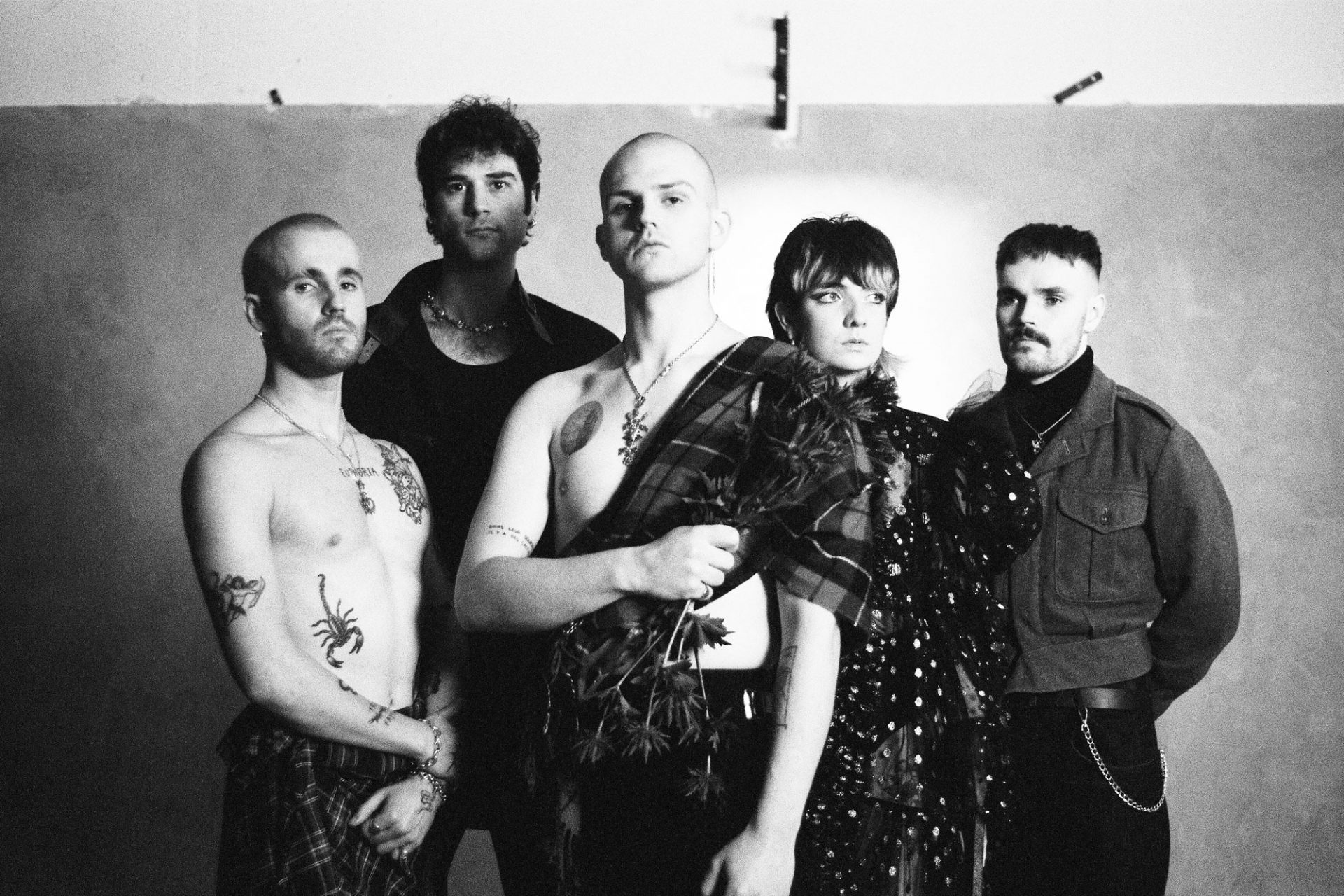 VLURE: “There’s a lot of power in vulnerability”

Having just completed their first run of headline shows, Glaswegian five-piece VLURE have cemented themselves as a band that instil a true sense of vigour through their multi-faceted music. The group are now looking towards their mountainous debut EP ‘Euphoria’ and the ambition that lies beyond.

VLURE are wholly in their element when unleashing waves of sonic zeal onstage, and having been quietly shaping their upcoming debut EP, the five Scots have fully embraced the detour from their regular lives in a five-date stint across the UK. “Now we’re all very sore and tired,” frontman Hamish Hutcheson admits. “We just realised how intense our show really is; we can’t go out there and not give two hundred per cent for the full 45 minutes, regardless of how many people are there. The music is written in such a way that it has to be performed with that truth and rawness. We’ve only now realised how big a toll that takes.”

Just about stirring himself back to life, drummer Carlo Kriekaard agrees that a price is paid but values the goods traded back in return. “It’s a very taxing show but very rewarding as well,” he adds. “We play each show as it’s meant to be played; that’s why it has such a big impact on us and the people that are there. It’s a life-affirming thing.”

This dedication to putting themselves on the line is something deeply engrained within the identity of each individual member of VLURE, something Hamish claims spans back to their roots in suburban Glasgow. “In these places, you really have to prove yourself in terms of what you’re trying to say; people are always going to be questioning it. You have to be strong and mentally aware to speak powerfully and be heard,” he explains, linking this to the band’s debut single. “Growing up in that environment shaped me as a lyricist; ‘Shattered Faith’ is a song that is about finding yourself, finding power in who you are and fighting back with that power.”

‘Shattered Faith’ is the vicious song that brought the first impression of VLURE to the world, and it is one that was sat on for a while – from pre-COVID all the way through to an eventual lift on live music restrictions – in order to storm onto the scene, maximising the impact of this exhilarating dance track. “There’s a lot of catharsis, release and rebellion in that, so to have it drop at the end of the 15 month period we had to endure was the right timing for it; it was the moment that it needed to be released,” says guitarist Conor Goldie.

While such a guttural punch to the senses alluded to a bold future for the band, they have since made clear that their volume and passion can be utilised in other fashions beyond rage. “You have to learn to be vulnerable, learn to trust others to not hurt you, and that you’re not going to hurt them. Trust creates love. This song is about learning that and how it gives you a fuller life,” Hamish says of the lyrical inspiration for their most recent single ‘I Won’t Run (From Love)’, which radiates a softer energy while still fitting inside the VLURE sound spectrum. “It’s quite a scary thing for a band like us to strip it back, tone it down and keep things simple, but there’s a lot of power in vulnerability,” Conor adds. “You don’t have to be brash or angry to feel strong.”

As a crux of their discography to date, this reflective track documents not only personal lessons from the past but indeed mentalities moving forward – while the value of breaking down internal walls to allow others into your live is now appreciated, the fierce quintet are now learning to take this approach into their collective spirit. “There’s a quote that goes something like: ‘At first you have nothing to give but yourself’. That rings true in all forms of art. If you’re putting yourself on the line, you can’t not get to where you want,” Conor explains.

Doing so in a tight-knit group certainly makes things easier, and the five musicians here prioritise honesty and friendship as a prerequisite for effectively generating their hive mind where no singular voice dominates; there is definitely not just one songwriter at work here. “We all create individually and generate unique ideas before anything is finalised,” the guitarist continues. “We all bring different things to the table, which makes VLURE a more organic being.”

If the band is indeed its own living and breathing organism its purpose for inception is as a vessel for raw emotion, and there is no greater example than ‘Euphoria’, the self-designated favourite and set-closer, which is also the title-track for their aforementioned EP.

“It’s a coming of age song that we’ve all related to at some point in our lives and, because of the way that it was written, it became a coming of age song for the band too,” Hamish begins. “It was the first song we really worked on together, as a band, from start to finish; we all put our own spin on it, and now it has a massive place in our heart. It was a real growth moment for us.”

Conor and Carlo are completely synchronised on this account, with the former admitting: “We always finish with ‘Euphoria’ and are on the verge of tears the whole time we’re playing it – that song is always complete catharsis. It’s about searching for meaning throughout our late teens and twenties in Glasgow. We search for said deeper meaning every time we play it.”

If it wasn’t abundantly clear already, VLURE thrive on the live stage, and they’ve already seen some meaningful results. “Although we’re still on quite a small scale, knowing people care really hits home,” Hamish admits sincerely. “You can’t understand it until it’s told to you. Just… never underestimate how good your music makes people feel.”

Artists relying so heavily on delivering a piercing performance could easily have felt an uncomfortable disconnect while releasing tunes from behind closed doors, and it seems VLURE may have fallen victim to not seeing the wood for the trees. Thankfully, any such notion has been put to bed for any who come into contact with songs this charged. “When we go on stage, we don’t leave any part of us behind.” Conor reinforces their dedication, but also the joy they have felt in wholly committing: “Five shows in a row was really emotionally intense, so that restores your faith in people wanting to connect with music.”

Walking a fine line between empowering and vulnerable, a choice has been made to settle for neither. Carlo clarifies that their goal is to “take you from one end to the other; we start with high intensity and then bring it down, release all this tension and create a whirlwind of emotion and expression. That’s how we curated the set and our EP – trying to capture the whole spectrum of feeling.”

The immersion into dramatised feelings is what they want, and also what you should expect when you tune in. Conor and Carlo emphasise the desire for listeners to go into ‘Euphoria’ with “an open mind”, and Hamish pronounces: “If people accept our honesty, they’ll take something away from it.”

With this slightly extended statement of intent almost out of the way, getting back into the live space they feel so at home in once again becomes a priority for 2022. The overarching plan? “Send it.” Sounds good to us.

Taken from the February 2022 edition of Dork, out now. VLURE’s new EP ‘Euphoria’ is out now.