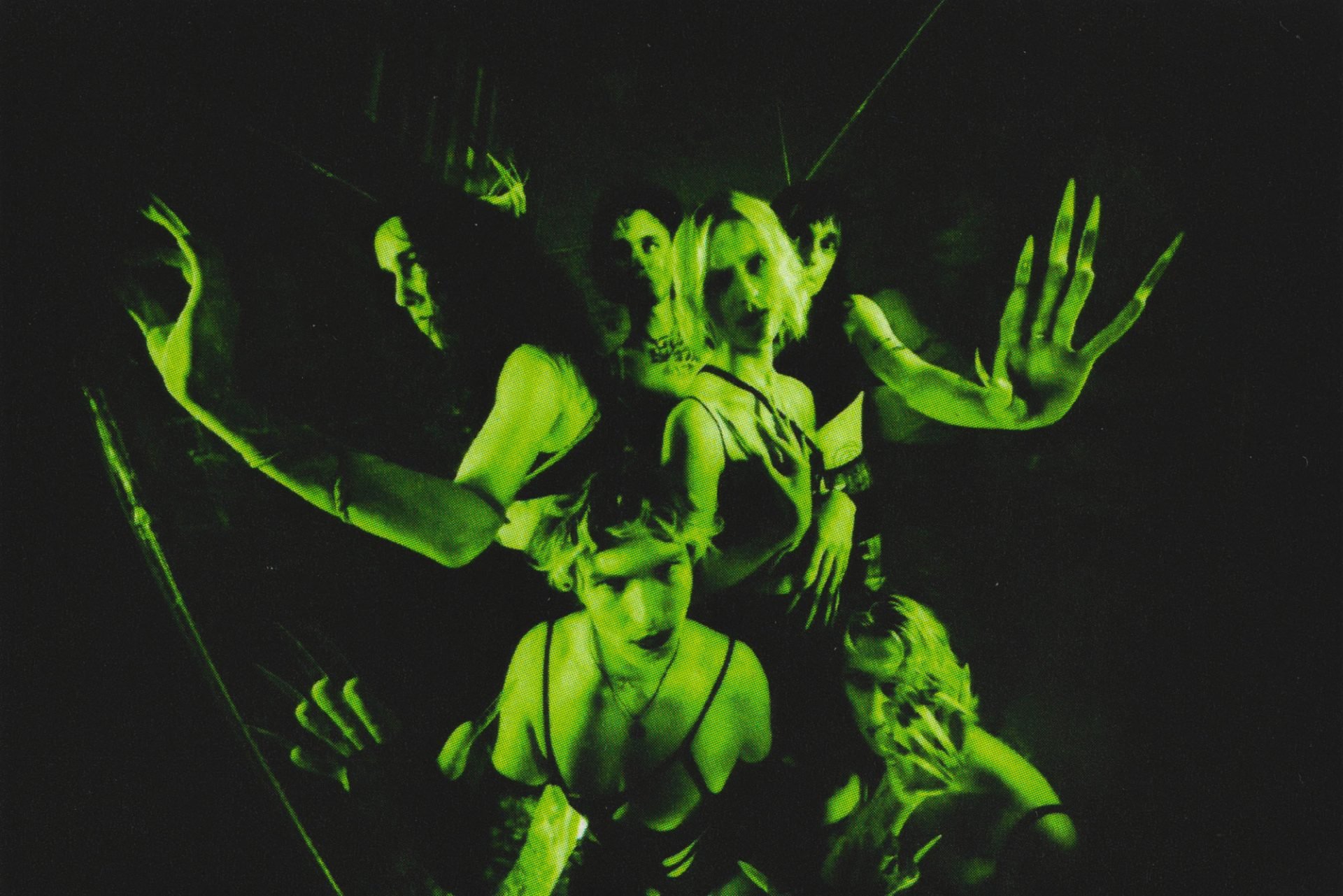 No one does a good time quite like Walt Disco, and now they’re pulling out all the stops for their debut album, ‘Unlearning’.

Walt Disco are a band like no other. The six-piece from Glasgow are warping the transcendent power of pop in their own beautiful, playful and wonderfully expressive image in a way that makes them stand out a mile in the creative mashed-up pop ecosystem of 2022. It’s been a long ride, encompassing a swelling line-up, years on the road, musical awakenings and long periods of personal reflection that have all culminated in the release of ‘Unlearning’, their stunning debut album.

When Walt Disco started, they were a very different beast to the glam-pop explosion they are now. Stuck with the all too convenient post-punk tag, the band were finding their way to express their true selves. The founding members of frontperson James, guitarist Lewis, and keyboardist Dave have been joined over the past five years by drummer Jack and guitarist and keyboardist Finlay and most recent addition Charlie on bass to flesh out the gorgeous blossoming of Walt Disco into a pop monster.

“It’s turned the band into a slightly different thing, or maybe more of a fruition of what it was meant to be,” explains Jack. “We’ve become best friends and are able to create together. It’s been an amazing time.”

The past two years have seen them evolve into potentially their final form as they spent the pandemic lockdowns fully ensconced in their own bubble, free to experiment and create and explore all their wildest musical notions. There were no outsiders, no big studios, no label directives, no extra pressure. What we have is pure, undistilled Walt Disco as they worked tirelessly out of Dave’s bedroom to create something special and further expand their own little world. “A lot of this album was self-produced, so we did a lot of learning as we went along and also we were making a lot of mistakes as we went,” laughs Finlay.

Like a lot of great pop though, the mistakes are where the magic happens. Just as important as the time spent creating together were the forged bonds and gang mentality that fostered a sense of ambition and strength between the six of them. “The album that has come out of it is really exciting,” beams Finlay. “The band has made us all feel a lot more confident in who we are.”

Confidence and exuberance are at the heart of everything Walt Disco do. “I’ve never had to brag before in front of anyone before joining this band,” laughs Jack. Bragging is good, though: Walt Disco have already more than earned the right to big themselves up as stars. The drive and ambition the band hold comes from a collective place.

“It’s brought a lot of good things out of us and helped us realise our potential as musicians,” explains James. “I’ve also come into my own more with singing and songwriting since doing that with the band. It’s definitely nurturing, and we’re all pushing each other and seeing what we’re capable of and helping each other achieve that.”

‘Unlearning’ is a debut characterised by a fevered rush of emotions that take you on an exhilarating journey. From the brash brilliance of ‘Cut Your Hair’, ‘Selfish Lover’ and ‘How Cool Are You?’ that front-load the beginning of the album to the second half’s tender exploration of the soul, the record tells the story of Walt Disco’s evolution both in a musical and personal sense.

“We wanted to make a record that was very different sounding to anything that’s been created before,” says James. “We wanted to be very experimental and mould new genres together while keeping it concise within the boundaries of a pop structure. I think we did it,” they continue.

“I’m really excited to see what people call this. It’s gonna have to be a seven-genre-long title,” adds Finlay, before James puts us on the spot to reveal our judgment on the sonic world of Walt Disco; fortunately, they gratefully accept our observation of an insane smorgasbord of glam-pop brilliance, like a beautiful selection of exotic cheeses. “We’re the antipasti platter of pop,” laughs James. Like all good platters, you have the opportunity to help yourself to a wide range of supremely satisfying treats. “I do quite like the idea of a song from the album being on a rock playlist and a hyperpop playlist at the same time,” ponders Finlay.

Over the past few years, the band have forged their reputation, powered by some incredible live shows and a string of iconic and uproariously fun singles. Consider the thrilling kiss-off shade of ‘Cut Your Hair’ and its mantra of being “young, hard and handsome, darling”. However, the album allowed them the opportunity to go a little bit deeper. “The album covers all sides of us,” says Finlay. “We do still love making a fun bouncy banger, but this album was a chance to explore the more introspective side of our songwriting.”

The way they recorded the album also gave them more opportunities to refine their songs. “The fact we didn’t have time restraints on studios, and we could just sit until 3am if we wanted to in front of a laptop driving ourselves mad gave us the chance to really think about what we wanted to do, which was quite a big thing on a first album,” he adds.

The insular mode of recording coupled with their naivety in dealing with new equipment and the actual practicalities of recording music led to them immersing themselves in the process to an extra degree. “There was a point making the album where there was one thing that would take us all day,” laughs James. “Obsessing over one tiny thing,” adds Finlay. “It took like an hour and a half to essentially record 20 seconds of guitar,” he laughs.

The search for perfection was necessary to match the development in James’ songs and lyrics which provide the record’s heart. “The album is about a lot of exploration,” they say. “These songs are about stories and relatable experiences that we had had in the past.”

The songs describe awakenings and affirmations of who they are and how they are going to present themselves. There’s a palpable feeling of inclusivity and discovery driven by the queerness that shapes and inspires the band, and the desire to encourage people to follow their own paths. A key song on the album is the opening track ‘Weightless’, which deals tenderly and beautifully with issues of gender identity. “That song was quite a breakthrough,” says Finlay.

“’Weightless’ shows that it can be difficult to be yourself, but there’s that feeling of bravery and accomplishment when you find that you can, and the album really gets that feeling across,” says Charlie. “We’ve all felt that way that there’s maybe a version of us inside that we don’t feel we can totally let out or explore fully, but in our songs and when we’re together as a band, we get to do that.”

Knowing that they are inspiring people to have the confidence to express themselves and find their own identity is something that Walt Disco cherish. “Even if it’s just for one person, then that’s the best feeling,” says Finlay proudly.

For primary songwriter James, the delicate, tender beauty of songs like ‘Those Kept Close’ or the heart-stopping epic of ‘If I Had a Perfect Life’ is amplified by being surrounded by the in-your-face shininess of the singles. “You can’t recognise happy moments if you also don’t feel low as well. That’s how the record goes. There’s a mix of emotions. I love albums that are just sad from start to finish, but I don’t think it represents the way we are. Extremes of emotions are how we function. I’m not saying it’s healthy, but it’s how we are. Those tender moments feel more special in between lots of different types of emotions.”

For a band with such a strong visual aesthetic – Walt Disco never look anything short of amazing – it makes sense that the album takes on a filmic quality or, indeed, that of a multi-act play. It even has an instrumental song called ‘The Costume Change’ in the middle. Faded Hollywood doomed glamour is a vital part of their aesthetic, and they revel in that here on songs like ‘Be An Actor’. “I love the Hollywood songs that are so ridiculous and over the top,” explains James. “On ‘If I Had A Perfect Life’, the chorus is slightly interpolated from a Doris Day song from Calamity Jane. I was obsessed with the melody that was so tragic and so beautiful.”

It’s important for Walt Disco that their message of inclusivity and self-expression is delivered in the most direct way possible. In a previous Dork Hype List feature, they revealed that they had sat down and decided, “right, we are a pop group”. ‘Unlearning’ is the ultimate fruition of that line in the sand mission statement. “Pop is one of the best ways to free yourself and be experimental,” says James. “There are so many things that define pop. Often, it’s just how concise you get your point across.”

The band have many touchstones from the golden pop era of the 70s and 80s – for example, the cult classic album ‘Hats’ by fellow Scots The Blue Nile. It’s a record also loved by a certain M. Healy from the-band-with-the-numbers. “It’s one of the most heart-wrenching records, but there are moments of tender joy on it. The space is really cold and electronic but still feels really human,” eulogises Finlay. You can trace some of the band’s glorious fashion choices and singular individualism back to Elton John’s outrageous stage costumes, something the band all agree was inspiring. Indeed, Elton influenced the album as they came up with the pop nonsense ‘la, la, la’ chorus earworm on ‘How Cool Are You?’ after watching Rocketman.

Despite their love of pop from the past, their primary influences now are the new generation of artists doing things differently. “It’s a really good time to be a group that wants to write pop-oriented music,” exclaims Finlay. “The average listener now is so much more open to crazy sounds in music and mashing up genres. If you look at people like Rina and Charli XCX – Charli’s ‘Pop2’ mixtape, some of the sounds on that are nuts, and Rina’s mashing up nu-metal, and everybody is up for it.”

“That’s what it’s all about,” sums up Jack. “Pop has always been a vehicle for change in music.”

The fact that a band as idiosyncratic and brilliantly creative as Walt Disco are thriving in a diverse and inclusive new pop ecosystem is testament to the fact that things have changed. Walt Disco are at the heart of a new way of expressing yourself. There’s a desire to explore new sounds and forge new paths. A desire to have fun and never restrict yourself. Perhaps their description of the Walt Disco live experience offers the best summary of the vibe that has made them so special: “It’s gonna be big, ridiculous and outrageous.”

Taken from the April 2022 edition of Dork, out now. Walt Disco’s album ‘Unlearning’ is out 1st April.