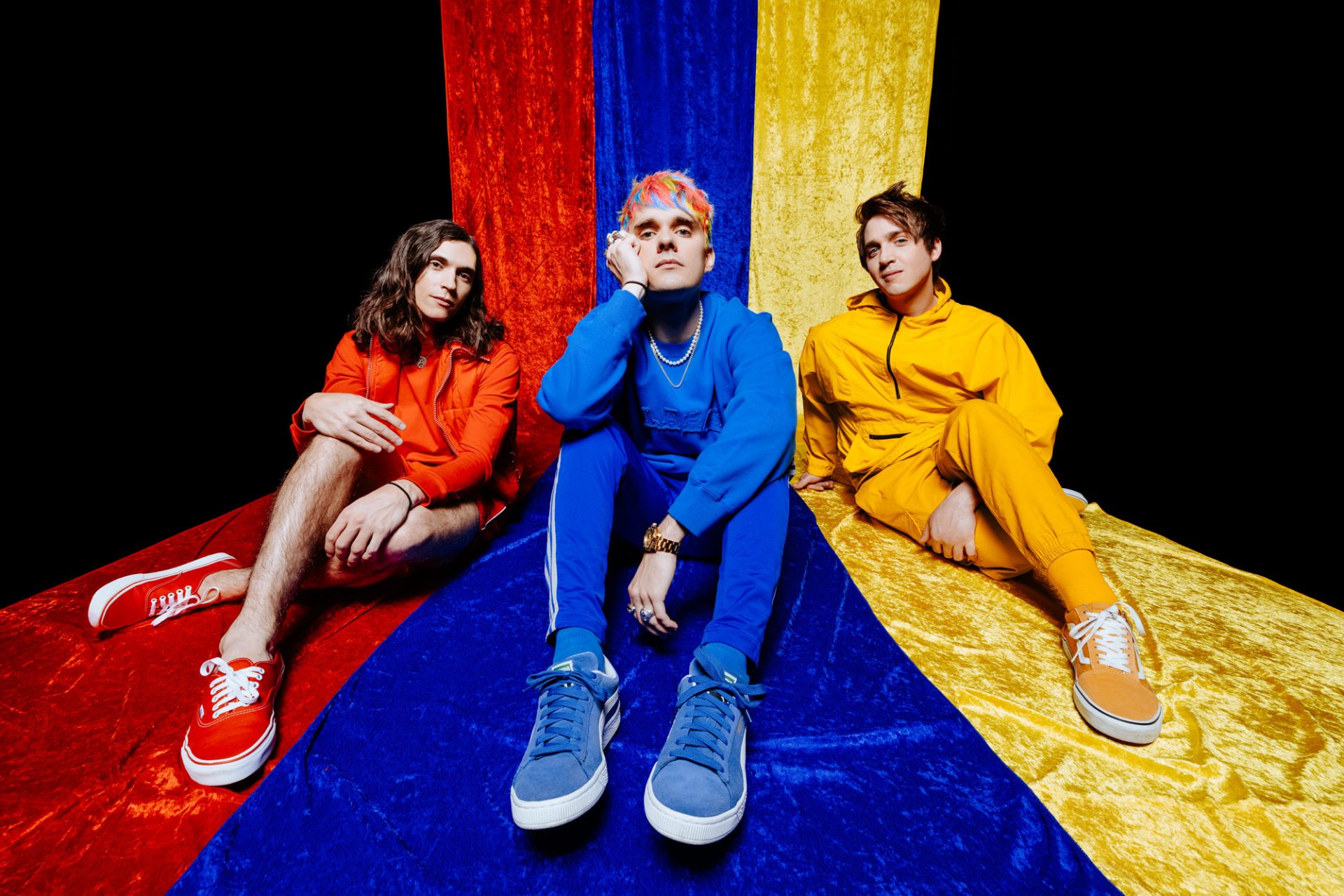 Arrogant? Stupid? Calling your new album ‘Greatest Hits’ certainly takes a bit of swagger, but then Waterparks’ Awsten Knight has never been one for keeping it lowkey.

Waterparks’ Awsten Knight is someone who’ll find a tangent and follow it to the ends of the earth. It’s alright by us, but it makes for frantic fun trying to get an article together. Chart stats from the last thirty years, an extensive list of his favourite films, which animals he’d pop in Waterparks (that’s our bad), and even him turning off his dryer – it’s all flying.

“Bumpkins still buy CDs – Republicans in the US don’t know about Spotify!” The frontman shrugs. “I typed in ‘Blake Shelton first-week sales’ – this wasn’t even his highest selling one – dude, first week 153,000 copies!”

Numbers are whizzing around his head. Frantically typing into the computer he’s beaming through while Dork sits watching, unable to stop the Awsten runaway train. His hunt? The various millions and millions that his band will potentially be up against come release day of their fourth album, ‘Greatest Hits’.

“We need to get the fuck to the Midwest! Oh my god. How… many…albums… has… I shouldn’t have a computer in front of me!” He says, typing through fits of laughter, “Blake Shelton sold… motherfucker! 10 mil!” He answers with a sigh that doesn’t feel defeated in the slightest.

They’re also up against Olivia Rodrigo – y’know, record-breaking ‘Drivers License’ Olivia Rodrigo – and previous Dork cover stars Twenty One Pilots with their own chart-topping success. But really, Waterparks shouldn’t have a problem.

Of all the pop-punk bands in this popping and punking world, Waterparks are the boldest. And we don’t just mean their effervescent chameleon skin effortlessly changing with each new era – including their most vocal members iconic hair, which is currently the ‘Greatest Hits’ tricolour of red, yellow and blue, hidden beneath a dramatically opposing grey hoodie. Who else other than the by-way-of-Texas trio would name their fourth album ‘Greatest Hits’, without any of their, err, actual hits?

“You can’t bitch out with an album called that, you just can’t do it… that’s so corny!” Awsten says, mocking the ratification for his band’s boldest move to date. “I had to have so many phone calls about it. There’s like maybe five people who press the emergency button… [and] that’s one of them. You’re like, ‘Oh shit, okay, I guess this needs to be a conversation’.”

It’s not hard to imagine the amount of ‘conversations’ Waterparks have had over the years. They’ve been bouncing their way around this fast-paced world for a while now. Understandably, Awsten’s flurries of CAPITALISED TWEETS, along with threatening to leak demos and whole albums – often following through when required by ‘Social Media Challenge’ rules – is more than enough to get his label’s sweating and rapidly smashing that emergency button.

Yet, here we are. ‘Greatest Hits’ could very well be Waterparks’ finest moment. Finding its start in – where else – lockdown, Awsten’s time alone rattling around his home meant he had the opportunity to scour his mind to see what really was going on. And it turns out, it was quite A Lot. There are songs on paranoia, depression, his band, and well, just about everything, to be honest, across its 17 (!!!) tracks.

However, its three constituents; Messr’s Awsten Knight, Otto Wood (drums) and Geoff Wigington (guitar) have also long since left behind their twinkle-eyed purest-essence pop-punk to entrench themselves in a far more complex world – one more akin to a shuffled hype-machine playlist than a ‘Now That’s What I Call Pop-Punk’ compilation. This is something they’ve been threatening since day dot, and far more explored than 2019’s ‘Fandom’ – there’s even a cheeky Limp Bizkit reference for good measure. But, just how pop are they ready to go, given they’re ‘God’s Favourite Boyband’?

It turns out all the way – as long as they don’t have to go full Backstreet Boys, mind you. “I don’t trust boys in white jeans like that,” Awsten reasons.

“But I think if they were to be like, ‘but you’ll have a billion-dollar budget’, I’d be like, ‘I got plans, let’s go!’ I would totally do the boyband route. That’d be amazing. Plus, they’d give me dance lessons; that’d be cool.”

So you’re up for choreography?

“I’m not a natural dancer. I like to dance – it’s fine – but I feel like if it was a mandatory part of the job, like, ‘And you have dance lessons on Wednesday at three’, I’d be like, ‘Good. First things first – Let’s. Moon. Walk,’” each separating clap conjuring the image of Waterparks gliding across stages the world over.

Like all good burgeoning pop icons, the trio seems to have their eyes set on creating something bigger than themselves – reaching for the stars on a ladder made of caps-lock tweets, albums chockful of unfiltered subconsciousness, and a fanbase to make even those chart giants wince. More importantly, though, just because within the five years or so since their 2016 debut album Double Dare they’ve opted for a more frantic style of working, doesn’t mean there’s any less consistency to what they’re creating.

Fully declaring that, “When people experience any art for the first time they should be alone,” Awsten’s wish for someone’s first listen of ‘Greatest Hits’ – and everything else – is “I want them to be in the fucking dark, maybe some dope headphones if they got ‘em!

“If not, whatever. I just want them to experience it not playing on their phone or texting people because you’re going to miss things, 100%. And you’re never going to get that first listen back. Everybody should just go on fuckin’ do not disturb on your phone and just experience it.”

Likening it to watching a movie alone for the first time to let the raw unfiltered out, he recalls one particular incident fuelling this motive. “I was at the movies with this girl, and we were watching Inside Out, and towards the end, I was starting to feel something, you know on the real sad, dramatic part? I had the hot feeling right here,” he gestures to between his eyes. “I was really in it. She fucking grabs my arm and was just like, ‘Oh my god are you gonna cry?!’ – ‘Well, now I’m not!’”

Similar to those legendary colourful icons, that’s right, the Power Rangers, Greatest Hits’ combination – red, yellow, and blue in this case – is each matching an aspect of Waterparks’ deepest essence, forming a MegaParx of sorts. It’s one that should be all-powerful, able to defeat those chart-smashing names they’re up against no problem. Maybe.

Referring to every album thus far as “someone jogging by taking a picture of where we’re at that time,” he says while taking mimed snaps of Dork’s face. “Then looking back at it and being like, ‘Oh, in 2020 this is what they were doing’. It’s always going to be a moving thing until I decide to press the big red button, and then…” A big Cheshire Cat grin breaking out.

“As far as ‘Greatest Hits’ goes, though, the songs are so different from each other, I wanted it to feel like… obviously it’s always going to still feel like us to some extent, it’s not like we’re reverting and being like, ‘Yeah. ‘Double Dare’!’” His voice hitting breakneck speeds. “I mean, people might want it, but they don’t need it. But because there were so many different styles and feelings, I wanted it to feel like it was the greatest hits of a bunch of albums they haven’t heard yet.”

It would also seem that this is the closest fans will be getting to an Actual greatest hits from Waterparks. Reckoning that if they ever released a comp as such, it would be “because we’re trying to escape a label situation – that’s what [American emo rockers] Taking Back Sunday did. If it’s strictly for an artistic thing, it’s a waste of a release or a waste of their attention.”

Awsten’s thoughts continue racing. “There’s always so much stuff to say, and do, and put out, that even just doing a month-long thing feels like a test – so much attention that’s getting wasted. There would be other things that I want to say so bad, but instead [we’d] be wasting that potential for new dope shit on a victory lap.”

So, does ‘Greatest Hits’, actually have The Greatest Hit Ever by Waterparks on it? Well, it turns out, no. They’re all the greatest, oddly enough. After essentially listing the whole album – and their perks – Awsten hits the nail on the head. “See, here’s the thing-” We’ve heard *that one* before “-if there was an easy answer, I would rewrite the album.”

In the distance, we hear the faint, frantic voice of Waterparks’ label begging Dork to hang up before they have to abandon the ‘Greatest Hits’ plan entirely – probably, anyway – and breathing a collective sigh of relief as he disappears back amongst those whizzing numbers. We don’t think Blake Shelton’s label has this problem, but where’s the fun in that?

Taken from the June 2021 edition of Dork, out now.  Waterparks’ album ‘Greatest Hits’ is out 21st May.