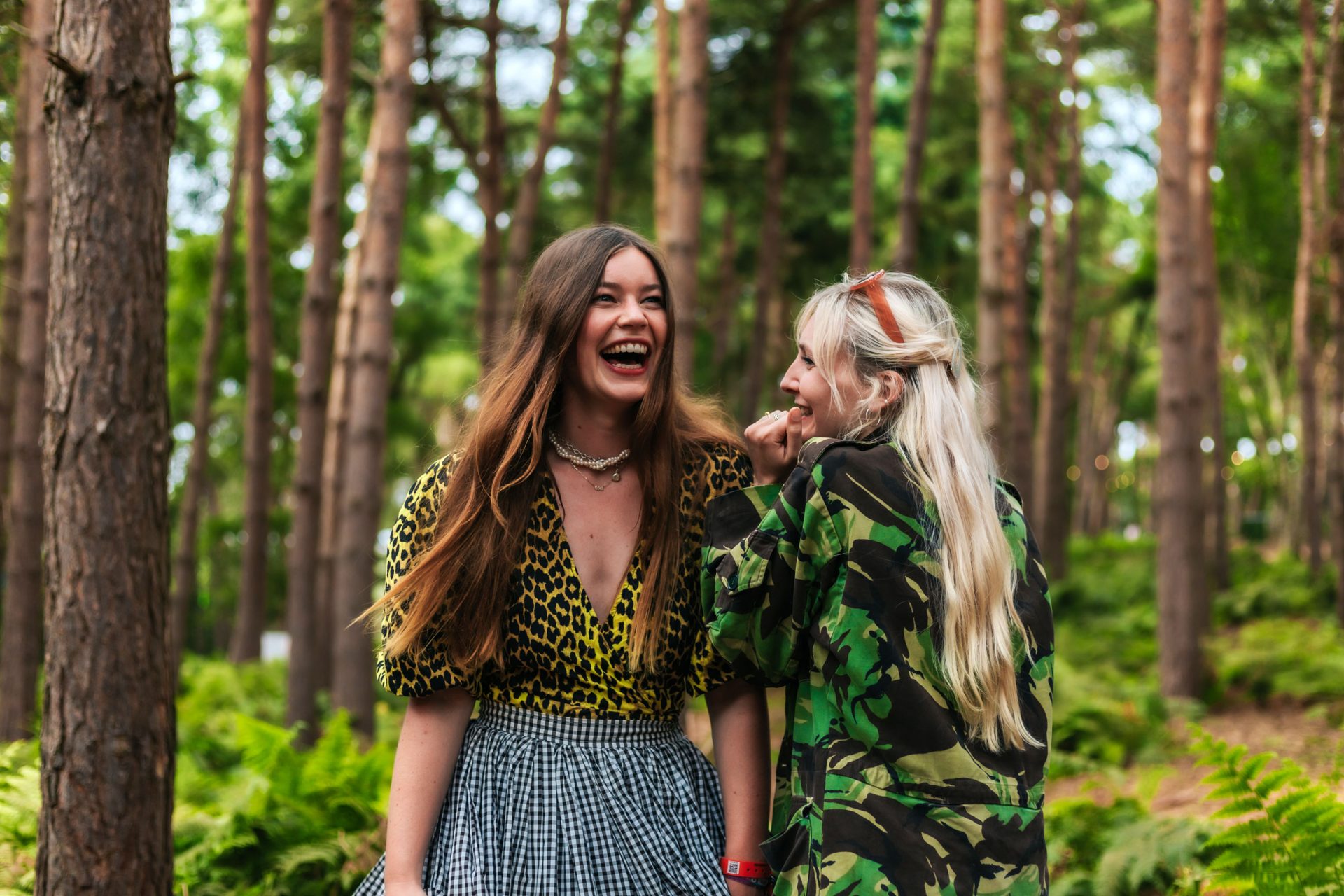 Wet Leg: “I keep looking at our schedule and waiting for someone to pinch me”

Need your musical muffin buttered? With quite probably the debut single of the year already on their scorecard, meet indie’s Next Big Thing™.

It’s been a bit quiet for new bands of late. We’re not sure why, but there have definitely been less of them around, cluttering up the function rooms of local pubs and the basements of sweaty venues. It might be because lockdown rules made it illegal for existing bands to practise together, and impossible for new people to meet. Or it could be because the complete lack of gigs over the last 18 months has meant no income and no end-goal for a new group to aim for (hint: it’s all of those things.)

With this in mind, we were even more excited than usual when Isle of Wight duo Wet Leg announced themselves to the world, seemingly fully-formed and ready to remind the world just how exciting new music can be. First off, they’re signed to Domino, home of niche but well-loved indie rapscallions Arctic Monkeys, among others. Added to this, their debut track ‘Chaise Longue’ is one of the catchiest, smartest songs we’ve heard in a long time, and we hear a lot of songs. So, like the giddy fans we are, we decided to give them a ring and find out a bit more about the Isle of Wight’s latest and greatest musical export ahead of their first gig since lockdown began, at Latitude Festival.

“We did actually form before everything shut down,” Rhian Teasdale, one half of the band, says when she picks up the phone on the first day of a heatwave the Met Office later labels as ‘extreme’. “I was doing some solo stuff, which started to not be very fun, and someone suggested that I ask Hester [Chambers, the second half of the duo] if she’d come and play with me, but I just didn’t think she’d want to do it. Then I had these festivals I was meant to go to on my own, and driving around on your own, being there without anyone else, it just isn’t very fun. So I asked Hester, she said yes and then we had the most awkward band practice of all time where we were both just really scared of each other.”

“We managed to record ‘Chaise Longue’ just before lockdown, and then somehow along the way, we got signed to a huge label?”

“I think we had maybe five gigs before all of this madness happened, and four of those were on the Isle of Wight,” continues Rhian. “We managed to record ‘Chaise Longue’ just before lockdown, and then somehow along the way, we got signed to a huge label? It’s all very hard to internalise. Very weird, and very nice! Honestly, I think we’re both looking forward to playing Latitude so that we can finally rip the band-aid off. There’s been so much chat and hype, so it’s very exciting and making us very nervous. It’ll be nice to go to one of the first festivals in over a year though, it’ll have a really interesting energy.”

“Plus, we get to have fun and go to gigs, all in one go,” Hester chips in.

The excitement to see other bands play isn’t just a result of lockdown, but also a lifetime spent on the Isle of Wight. Cut off from the mainland by the most expensive ferry trip per mile in the world, it may be geographically close to the rest of the UK, but for a teenager with limited funds it may as well be in the middle of the Atlantic Ocean.

“I think it works out at an extra twenty quid or so for the ferry if you want to see a gig,” says Rhian. “That doesn’t sound like too much, but what sixteen year old has forty quid to spend on a gig ticket and transport? I definitely didn’t.”

Here at Dork, we’re always asking the big questions, drilling deeper than any other publication dares to. So of course when a band releases a song called ‘Chaise Longue’, we had to ask them what their favourite items of furniture were…

Chaise longue
Hester: “We have one in the flat, but it isn’t actually very comfortable because it’s so old.
Rhian: It also has loads of mic stands underneath it, although I don’t know if it’s them that make it uncomfortable or if it’s just lumpy. A chaise lump.

A stool
Hester: I like a stool because you can stand on them to reach the top shelf in the cupboard. I’m quite short, so it’s very beneficial to have in your life.

1970s brown velvet modular sofa
Rhian: I got one of these for £100 on Wightbay, which is like eBay but for the Isle of Wight, obviously. It’s practical, it’s comfortable, and it’s very good.

“Plus, if you wanted to get the last boat home, you’d have to leave the gig early,” adds Hester. “It’s definitely a strange place to grow up because of that sense of disconnection. But I do think that the music scene is a very wholesome thing. It’s full of wonderful young people and, because there’s not much to do here, people get pushed together through music. A lot of different and lovely stuff comes from that, and it’s always been like that for us growing up. So the island has influenced us in that way, as well as through the isolation and inconvenience. Having said that, we’re also influenced by a lot of bands who aren’t from here, so we do have to go across the water occasionally.

“There is one good venue actually, it’s called Strings, and it’s in Newport. It’s a good place to play, a good place to see a band, and most importantly, it looks like the Bronze, the nightclub in Buffy the Vampire Slayer. So the options are travel to the mainland or try to convince bands that Strings is a worthwhile touring spot.”

“Either that or wait for them to play the Isle of Wight festival,” laughs Rhian. “We have to get our fix of music for the year in that three-day period, and then there are no more gigs for another twelve months.”

If the gigs won’t come to you, the only alternative is to go to them – which seems to be exactly Wet Leg’s plan, if their touring schedule is anything to go by. A slot at Sports Team’s Margate bus trip was pulled due to a clash with Latitude, but supports for Declan McKenna and Jungle are still set to go ahead. “I keep looking at our schedule and waiting for someone to pinch me, if I’m honest,” says Hester. “We’re a little baby band, and we’re trying to wrap our heads around being asked to support all these bands that are up on this pedestal as far as we’re concerned.”

Despite the modesty on their part, there’s no question in our eyes that Wet Leg are soon going to be a Very Big Deal Indeed. We know, don’t count your chickens before they hatch and all that, but with a debut single as cracking as theirs, it really does feel nailed on. It seems we’re not the only ones getting excited, with Chaise Longue getting regular radio airplay and blanket coverage which even reached publications in New York. In true rock’n’roll style, this unexpected success was celebrated with… a beach barbecue.

“It was an eventful barbecue, though!” says Rhian. “After it was done, we wanted to make a little campfire, and I decided to tip out the hot coals onto this pile of wood we’d made, to really get it going. So I pick up the barbecue, and I’m all full of myself like ‘this is a pretty cool idea’. I charge over to the wood holding the barbecue and just put my foot in the sand where the barbecue has been for several hours, and when I turn round to see why my foot is so hot, I realise I’m just in this glowing red sand! So yeah, we had a pre-recorded Radio 1 interview, and I listened to it with my foot in the sink for about four hours, hoping I hadn’t permanently crippled myself.”

“It was so gnarly!” says Hester. “Rhian was so cool about it, real rockstar stuff.”

“I’ve actually got fresh skin coming through now, which looks more beautiful than my skin has in years,” says Rhian. “So if the band doesn’t work out, I’m going to become a beauty therapist and get people to walk on burning hot sand. No pain, no gain.”