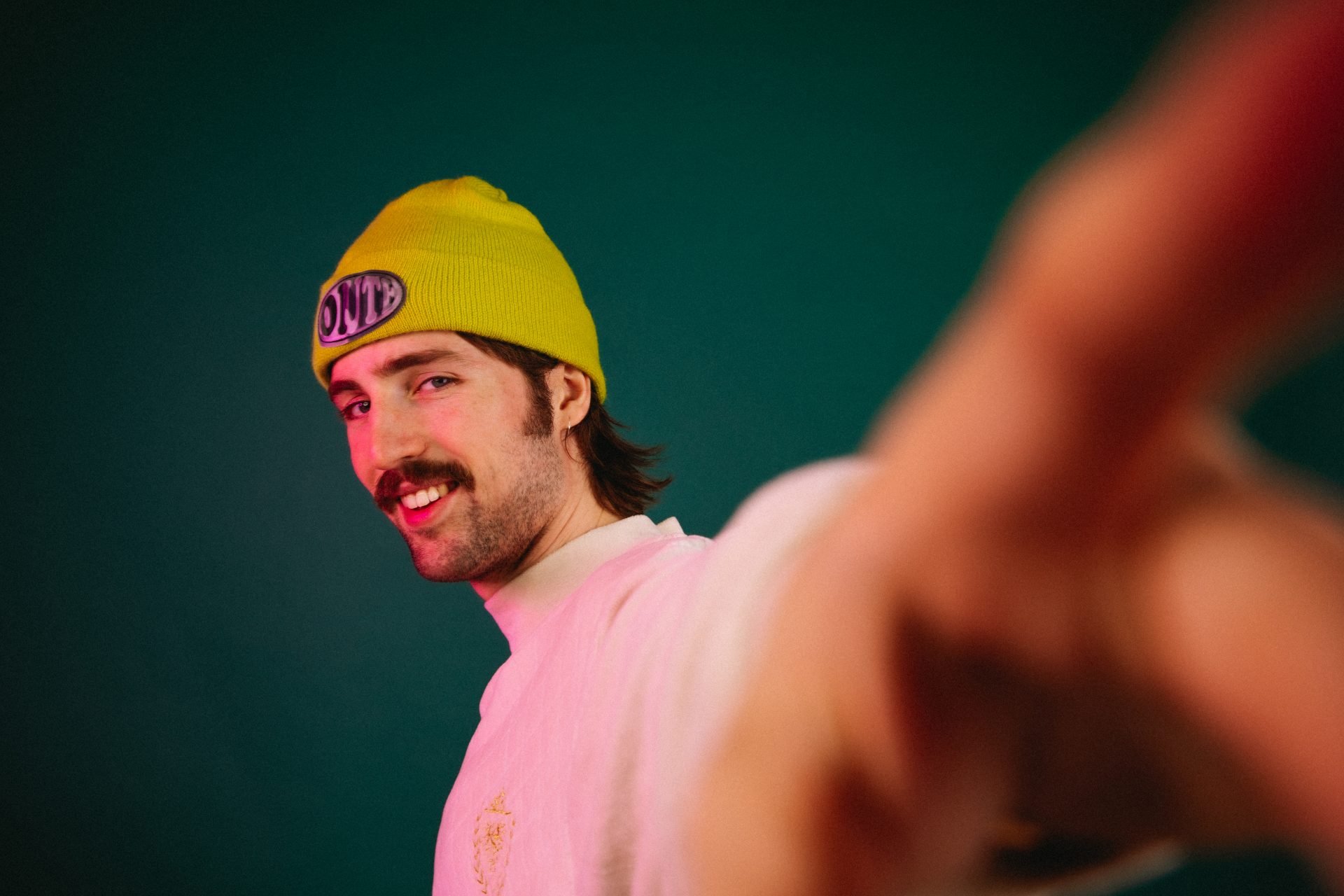 Will Joseph Cook: Goofin’ around

A viral hit, a sense of global community and a new record finds Will Joseph Cook more assured than ever before.

Oh my god! There’s a huge bee in the room,” gasps Will Joseph Cook mid-interview. It’s time to play hero, as he zips off to release the rogue insect back into the wild. “You better bee-lieve it,” he laughs. It’s a fitting interruption for someone with so much buzz around them [Sorry – Ed]. Following the release of 2020’s aptly titled ‘Be Around Me’ – and the TikTok explosion surrounding it – it’s been non-stop hype in Will’s world.

You’d think that level of exposure would add significant pressure to whatever came next. Not really, it turns out. Instead, the king of indie bops didn’t hesitate to launch himself full throttle into his next project, catapulted by newfound freedom. “You’ve proved that you can make a record, and someone’s given you the opportunity to block out a bunch of time in your calendar and make something incredible. It’s the most fun I’ve ever had in the studio.”

Rather than feeling daunted by the online fame, Will found that approaching his latest album, ‘Every Single Thing’, he was more self-assured about it than ever. “Having something happen like that, that platformed me in such a massive way, was super validating,” Will explains. “It celebrated the biggest creative risk on the record. The bit that went viral I almost deleted from the song. Going into this project, I felt like I could be a lot more myself and take things a little less seriously. I’m putting my creative ideas under less scrutiny. Leaning into what pops out of my brain rather than thinking: is this cool? People want to see something original and hear something deeply relatable that hasn’t been said out loud yet. It was a quest to find more of those things.”

The moment in question on ‘Be Around Me’ is quintessential Will Joseph Cook – it’s the flutters of a new romance, uncertainty and real raw emotion that defines his music. ‘Every Single Thing’, though, is tied together by more than one common trait. It’s a body of work that flows effortlessly from track to track with a continuity that has developed hugely since his earliest releases. Written over around three months and then recorded in a post-pandemic Mexico, it was built over a condensed space of time that offered the record the opportunity to become its own entity.

“It came together in a very natural way that I haven’t really had the opportunity to do before,” reflects Will. “I’ve never really worked at that speed before. It was a real privilege to have the opportunity to create something in such a condensed and creative period of time.”

“I think that’s how you achieve that [sense of cohesion]. Songs have to be recorded in the same breath to feel connected to one another. It was a nice change of pace compared to in the past, where it’d be over the course of two years, picking the best songs I’d made from that time period. This was a lot more committal and just really fun. It completely took over my life for a couple months.”

It also marked a new turn for Will production-wise. Initially struggling with the delay of crafting something over Facetime, he soon managed to push the album in fresh, thrilling directions. “The biggest risk was worrying less about the sonics and leaning into the things I had available to me. I’ve been playing a lot fruitier chords and getting into jazz and bossa nova – I had a really big Chet Baker phase over lockdown. I wanted to take those flavours and then also R&B style writing – the sexy confidence that’s in a lot of the lyrics and melodic choices. I wanted to take the amalgamation of those writing and chord influences and put them into my up-tempo, indie aesthetic to see what I ended up with.”

“The bit that went viral I almost deleted from the song”

The result is Will at his most playful and yet most mature. It’s evocative of beer garden flirtations and dancing in the streets at 4am, but at the same time, it’s remaining by someone’s side in their darkest hours and ruminating on if you will ever find closure. It’s light-hearted and breezy, intended to lift you out of a difficult spell, but it also acknowledges those difficulties. Will’s funky, pop-heavy sound allows those tenser moments to become more palatable and easier to swallow.

“It’s a love song album – that’s the general theme,” Will remarks. “Some of the tracks are more reflective. ‘Bop’ is written from the perspective of being nervous and flirting with someone at a house party when you’re a teenager, and how abstract the idea of love seems and how cheesy it is. The closing track ‘Guaranteed’ is a lot more existential, looking at what it’s all for – why are we even able to feel these feelings? It’s more deathbed thinking. It’s not all super rosy. In general, I actively try to make my music make you feel weightless when you’re listening to it and for it to feel like a positive release. If I’m writing about something more difficult, I want to present it in a way that makes the topics feel lighter or more manageable. A spoonful of sugar helps the medicine go down – I think it’s one of those.”

It is an innately saccharine endeavour, but never so much that it gives you a toothache. ‘Goofin’ About’ is an almost slow-jam-esque venture that keeps things grooving with a longing to remain in the present. It’s a key feature of ‘Every Single Thing’ – it does at times reflect and dream, but it finds a lot of joy in the moment. Because of that foundation in the now, you experience every rush and high alongside Will.

That’s not to say that he can’t also tackle the more serious, introspective moments. ‘Today It’s Raining’ tackles a period filled with worry as his girlfriend fell ill and had a stay in hospital mid-lockdown. “It was a song to make her feel better and get the sad feelings out,” Will confirms. In that sense, there’s a kind of healing in the track. A mellow and stripped-back recollection of the gloomy day, it provides some solace to be found in re-treading that ground. There’s an unbreakable thread of hope that prevails throughout.

To weave that thread, Will reaches for the familiar and the resonant. By providing a series of tracks that ultimately mirror a host of feelings felt by many, there’s a promise of good to be found in relatability. “I didn’t want to cheap out on any lyrics on it. Those are the best songs. Something that people can project onto and really understand what you’re getting across. That’s underrated in a lot of pop music.”

‘Easy Undone’ and its chirpy beats feel like the antidote to any gloominess, while ‘4am’ bounces into life by expanding outwards into immense distortion. There are multiple instances of those emancipating sonic experiences, creating that weightless, floating feeling Will strives for. He manages to costume them differently every time. They may sound miles apart, but the album continually delivers that all-important levity in every shade. “It’s the first time it’s felt like a considered vision,” attributes Will. “It came about in such a short space of time because of that. I was like, well, I know exactly what I’m going to be making here: I’ve got my sound palette, I’ve got my themes, here are the songs all fully formed on guitar. That takes a while to find. Some people come straight into it at fifteen and know exactly what they are, but I’m still forming myself as a person, let alone a musician.”

“I’m still forming myself as a person, let alone a musician”

‘Every Single Thing’ does offer that journey towards self-discovery, and those new means of creation found in the process certainly contribute. Naturally, crafting an album mid-pandemic proved to be a different process, but there’s some good to be found in that. “It freed up a lot of space for artists, if there was any silver lining,” Will reflects. “No one’s telling you to go on tour, so you can focus on writing and creating and go back to where everyone started – being in their rooms, making tunes.”

“It opened up alternatives. I think a lot of people were very set in their ways in how albums could and should be released. There are people now that will have done or will never do a live show, and that doesn’t mean they’re less of an artist because some people don’t want to play live. I think that’s a dynamic that wasn’t permitted in the pre-pandemic industry as much. People were expected to turn it into a live show, and some people are introverted and want to stay at home. I think this has validated all of those people. Anything that breaks down the conventional barriers is a good thing because it allows people to be themselves.”

Though this is a liberating development for some, for Will, touring remains a beloved part of his artistry. Fresh from a support slot with Declan McKenna at the Royal Albert Hall (“definitely one of the most fun shows I’ve ever done!”), this year has seen Will back on the road across the UK on his own headline tour. After the worldwide success of ‘Be Around Me’, however, he found that his fanbase had strayed far beyond UK borders. From Mexico to Indonesia, the world has quickly become populated with Will Joseph Cook fans. Though his tour only took him around the UK, he found a way to involve those international listeners; each night livestreamed on Twitch to provide an immersive experience for those who couldn’t make it.

“Because I don’t have huge fanbases everywhere, everyone is so spread out. That’s what happens with a lot of online fanbases now. It makes touring very convoluted. I thought it would be cool to share something that would otherwise be very UK-centric and weave it into the story with everyone else,” shares Will.

Beyond tuning in from hundreds of miles away, Will has found himself with an infinitely committed fanbase that has ultimately transcended him in the most heartwarming way. “There’s loads of cool stuff – I have a few group chats with fans in different countries. They don’t even talk about my music on there anymore,” Will laughs. “It’s just become a friendship group, which is kind of the goal. It’s so hard to form a community within music nowadays, especially for younger kids who missed out on those formative years of going to concerts and meeting people there. It’s nice if people can become friends online first, and when they come to the shows, it’s a get-together, not just a solo experience. They don’t have to have loads of people at school or work that are also into it. They can just go and experience it with their Will Joseph Cook mates. I’ve been completely pushed out. It’s beautiful!”

There’s something equally romantic in the bonds Will’s music has facilitated between fans and his combination of head-over-heels lyricism and giddy beats. Each easy guitar strum of ‘Every Single Thing’ guides you a step further into this therapeutic, appreciative world. Make yourself at home and allow Will Joseph Cook to relieve the weight from your shoulders. ■

Taken from the July 2022 edition of Dork, out now. Will Joseph Cook’s album ‘Every Single Thing’ is out now.