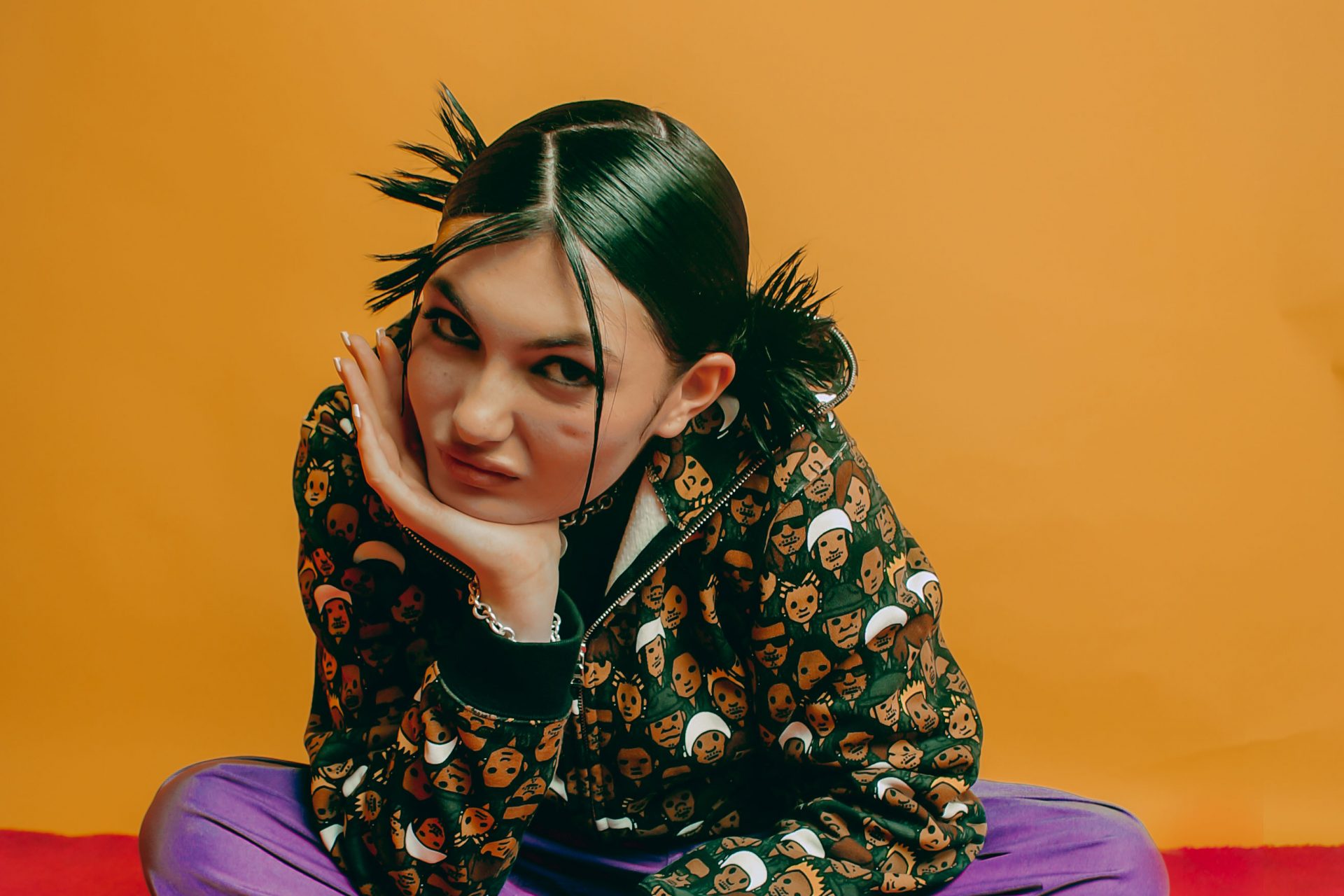 “You can do whatever you want,” says Willow Kayne about the culture surrounding music in 2021. A culture in which, by dropping just two peerless pop bangers, she has effortlessly announced herself as one of the most exciting new pop stars going. Willow Kayne certainly is going to do whatever she wants, and we’re going to listen.

It’s hard to overstate just what a character Willow Kayne is. Positively bursting with personality and attitude, Willow is hilarious, completely self-aware, haphazardly chaotic, gloriously inventive and creative and almost cartoonishly fun in the best possible way. In short, she’s everything that makes a thrilling pop package, powered on energy and enthusiasm. Like consuming five cans of the more garish technicolour energy drinks, her vibe is always set to maximum. For Willow, her main passions are threefold, and each informs the other. “I really like fashion, graphics and music. Luckily they all work hand in hand,” she says excitedly before casually dropping in, “I’ll probably end up directing music videos in the future,” like it’s the easiest and most obvious thing in the world. You see, that’s the thing with Willow: anything and everything is possible.

Although she has only released two songs properly this year in the anthemic ‘Two Seater’ and high-energy middle-finger kiss off for the trolls of her latest single ‘I Don’t Wanna Know’, those two songs have made a gargantuan impression. For those “in the know”, though, Willow has been making compelling odd pop for a while on Soundcloud. Some of those early songs have disappeared; however, some other examples of Willow’s maverick genius remain, like the super cool, super strange lo-fi rap of ‘Gibberish’. “That song started the whole chain reaction,” she explains. “I didn’t realise that it would get so much recognition. At the time, it only had like 40k streams, but I was like, oh wow, 40,000 people like my song!”

“My generation is pretty confident and cutthroat”

Songs like ‘Gibberish’, and her two properly released singles highlight the naivety and enthusiasm that make Willow so exciting. Most of her earliest music was made on Garageband and a “cheekily acquired” copy of production software programme Logic. “Musically, my structure was just shit,” she laughs. “If I’m doing it on my own, it still is a bit shit, but I’ve never had musical training, so I was like, ‘It doesn’t really need a bridge, does it?’ It does make a song and is semi-important stuff to know. I remember I once posted a song where I rhymed a word with the same word, what’s going on there?”

The combination of that indelible spark of charisma coupled with DIY experimenting helped catch the ear of some music industry bigwigs in America, precipitating a life-changing moment for Willow. “From ‘Gibberish’, some people in America found me, and they wanted to fly us out to LA,” she says. “Two weeks later, me and my mum are in LA. I was just sitting on a balcony smoking a cigarette next to my mum thinking, I could do this for a career. Little things I put out on Soundcloud got me here.”

The Willow-down: 5 facts about Willow Kayne

1. Willow’s two favourite smells are dark woody amber – think fancy perfume or a sponge. “I like the smell of a natural sponge. Like a bath sponge.”

2. Her video for new single ‘I Don’t Wanna Know’ is amazing. Directed by Bedroom (who have done vids for Sports Team and Beabadoobee) it finds Willow in her multicolour wondrous bedroom flying through cyberspace to slap down the trolls.

3. She also made the song with Dork indie hero Oscar Scheller.

4. It only took her two seconds to instantly declare her fave flavour of ice cream: pistachio.

5. She’s a new Gen Z icon in the making with another new song on the way “soonish” and a couple of EPs too.

The experience of actually living in LA and recording was a surreal one. “I thought that I would go to LA, and it would be kids taking selfies in the street and everyone sipping kombucha, but I loved it,” she exclaims. “One thing I didn’t like though and will not do again is you would do a session, and there’d be 10 kids in the room, just there. They’d say, ‘oh yeah, I contributed to the vibe’. What do you mean? I don’t know who you are, Marcus!? It’s a different vibe.”

The most important thing for Willow, beyond making actually good, vibrant songs that connect, is creating her own world to accompany the music. The visuals, the clothes and the imagery are just as important. “The people I truly look up to have all built a whole world with an aesthetic to match,” she says. “The idea that you can dress the world and pick the soundtrack is exciting to me.”

Her rise over the past six months has been swift, including winning an Ivor Novello award and being mentored by pop royalty and banger king Nile Rodgers. Opportunities are coming thick and fast for Willow, and it’s easy to see why. Her music and attitude resonate perfectly with a new generation of kids who want to take control and express themselves any way they desire. Those sentiments are at the heart of Willow’s music. “It’s very ballsy music,” she proclaims. “I’m very rude in my lyrics, but it’s fun and singalong. My generation is pretty confident and cutthroat.”

One medium in which Willow truly shines is on TikTok, a platform that she uses in a super engaging way to bring out her personality. She also uses TikTok as a testing ground for songs she’s working on, offering fans an intriguing glimpse behind the curtain. “I’m sitting on 50 songs. I like sharing things because I’m impatient,” she says. “TikTok is where my personality comes out most because you can just chat shit.”

It’s still early days for Willow, and the possibilities are endless. “I have no idea where it’s going to go,” she laughs. “Some days I wake up and go, yeah, I’m going to do a punk tune today! It just depends on how you feel. I think about this quite a lot – what is my genre? I don’t even know how to describe the music. I’d just like it to be described as Willow Kayne music. I want my own genre.” Get ready for Willow Kayne music to take over the pop world.

Taken from the October 2021 edition of Dork, out now. Willow Kayne’s single ‘I Don’t Wanna Know’ is out now.