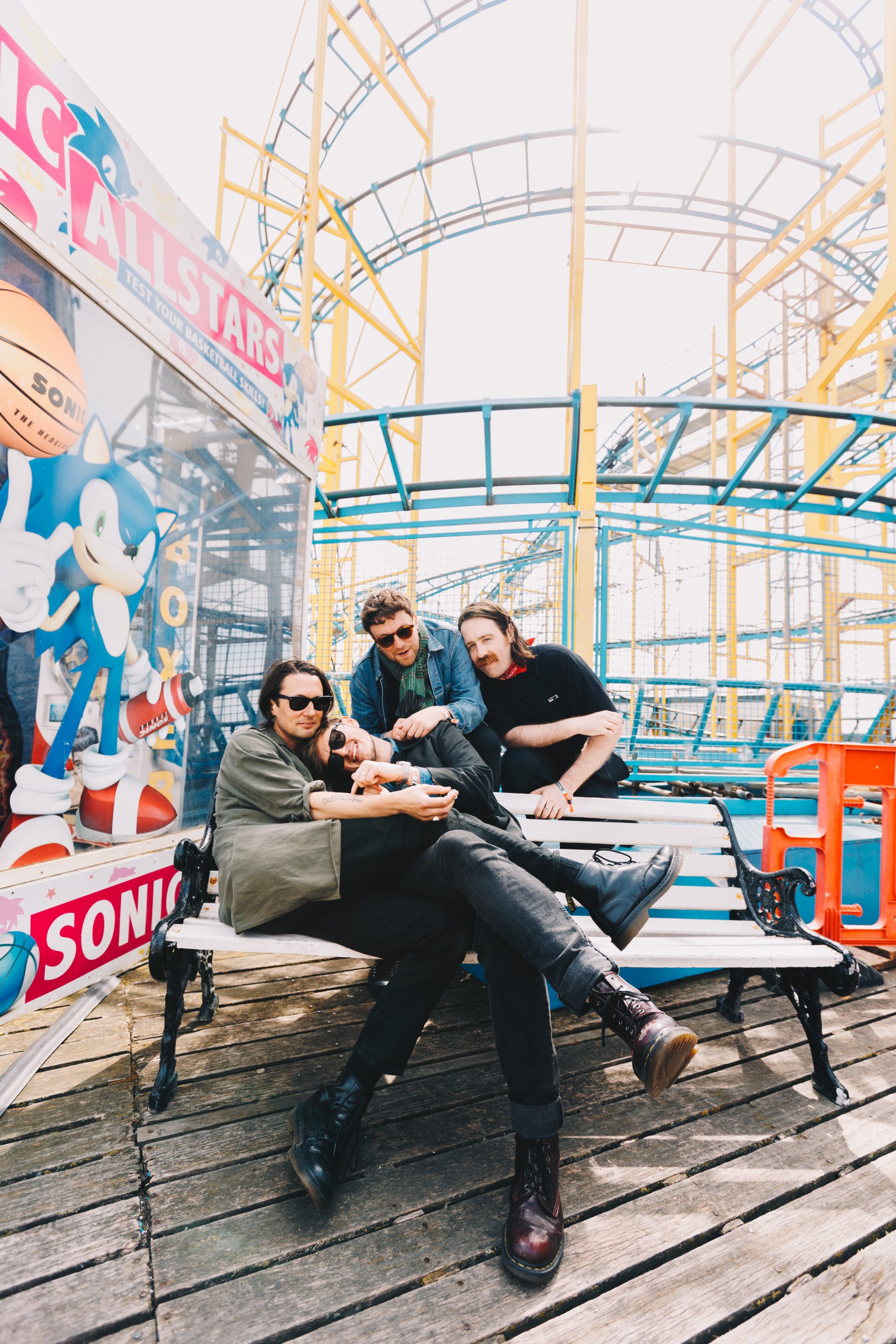 Yard Act: “We haven’t written our ‘Sex on Fire’ yet”

It’s been a mad, breakout year so far for Yard Act. With a chart bothering debut album and a rep as one of the best live acts on the planet, we reconvened to check in on what’s gone down.

Over lockdown, the concept of the ‘Staycation’ was dusted off and given pride of place in the British psyche. The romance of the seaside was resurrected, and the temperamental weather and gale-force winds were gallantly ignored by thousands of holidaymakers trying to pretend they were by the Mediterranean. Seagulls! Fish and chips! Those machines where you put 2p coins in and get more 2ps back sometimes!

Luckily we don’t have to act like we all want to go to Cornwall or Brighton instead of Barcelona anymore, so seaside towns have had to resort to their old tricks to draw us back. Front and centre in Brighton’s case is The Great Escape, an annual festival of new music which is like SXSW, but not as sunny.

Cut to James Smith and Ryan Needham of Leeds post-punk darlings Yard Act in the pub at the end of Brighton pier, trying to avoid being blown overboard. “This might be the furthest out to sea we’ve ever done an interview,” says James, stirring the ice in the unexpectedly pint-sized mojito he’s been given by the bartender.

It’s not the only first that the band have encountered this year. Their debut album ‘The Overload’ hit Number 2 in the charts, they played a slot at Coachella and even made an appearance on The Tonight Show Starring Jimmy Fallon, among other highlights.

“It’s weird; we don’t really talk about how amazing it all is,” says Ryan with a laugh. “We’re just getting through week by week because we’re so busy and don’t have that many chances to reflect on everything. When someone lists the chronology of the year so far, it is pretty mind-blowing, but we’re in the eye of the storm. Because it got incrementally weirder instead of hitting all at once, each step feels like the most natural thing, despite how bonkers it actually is.”

“I feel like it’ll be a few years before I realise what’s actually happening,” James adds, crunching on an ice cube. “I can anticipate what it’s like for someone on the outside looking in, because I’ve been there, and I’ve watched other bands’ successes. You can’t escape it, and it looks like such a rush. But this is the first time I’ve been in it to any great degree, and you just take it day by day, which I’m grateful for. Those highlights will probably reveal themselves once everything slows down, but at the moment, it’s just nice. It’s nice because we like each other, and that makes it easy.”

It’s not all business-as-usual, though, with the band starting work on their second album, as well as working out the best way to take their show into bigger venues without losing anything. As any fan of the band will attest to, Yard Act’s live shows are as much about the band chatting with audience members and inviting them to participate as they are about the music. A recent gig even involved James’ grandad coming on stage for a rendition of ‘Green, Green Grass of Home’. As larger gigs loom, it’s no surprise that they’re wrestling with how to preserve that side of things.

“We’re deliberately trying not to write for bigger stages – partly not to tempt fate,” James jokes. “The fun of it is that the opportunities expand, and you get to decide where you see yourselves within that. What do we want to retain of where we’ve come from, and what’s ok to lose as we expand? I don’t think you can take our ramshackle show where we chat with the audience and let them climb on stage. That’s not going to fly in a thousand capacity venue.”

“I suppose it might,” concedes James. “But the main thing is we’re making choices as we go, to figure out what we want to be and what we want to lean into or out of as we expand. On one hand it’s going to be great breaking out of those 200 capacity venues, but on the other hand, we could always drop back down, and that isn’t necessarily a bad thing.

“At Coachella, I was standing there watching people like Megan Thee Stallion and Rina Sawayama, who were both incredible, and almost taking notes on what they were doing. Obviously, we’re unlikely to get that slick, it’s not in our nature, and it wouldn’t hang well off of our gangly frame. But you do need to fill that bigger stage and consider things – like actually getting a lighting engineer, for a start!”

The band also supported Foals on their UK tour recently, yet another ‘pinch me’ moment in a year full of them. “Now that was really useful,” James continues. “Because it’s hard to imagine Megan Thee Stallion playing in Southampton Joiners, but with Foals, you know they did the same circuit that we did, so it gets you thinking about what they’ve retained and how they’ve evolved to get there. It sounds boring but I was there taking notes again, seeing what we could learn.”

So far, not so rock ‘n’ roll, but with multiple previous bands under each member’s belt, Yard Act are more than aware that success doesn’t usually happen by accident. “There’s an unhelpful mythology there,” admits James, amidst discussions of what it actually means to have ‘made it’ as a band. “Then you get layer after layer of thinking you’re in the clear, and you just never are. I really naively thought that when we hit the A list on BBC 6Music, everyone must have heard of us, but there’s a fucking ginormous world of people out there who don’t have any fucking clue who you are. If you want those people to go to your gigs and pay your wages by seeing you, then you’ve got to get out there and play the music to them.

“It’s brutal, and it sounds Tory as fuck, but I do understand that nobody owes you a career. We live in a weird capitalist society where nobody has any job security, not least within creative industries. The absolute blunt truth of that plus free well is that if an audience doesn’t like what you’re doing, they fuck off, and they don’t pay your wages. It’s not a romantic view, but it’s probably good life advice.” He grins as he bites into a slice of Margherita pizza that’s been procured from somewhere nearby.

“Best life advice I can give is don’t get leathered every day,” adds Ryan. “That makes it a bit easier.” ■

Taken from the July 2022 edition of Dork, out now. Yard Act’s album ‘The Overload’ is out now.