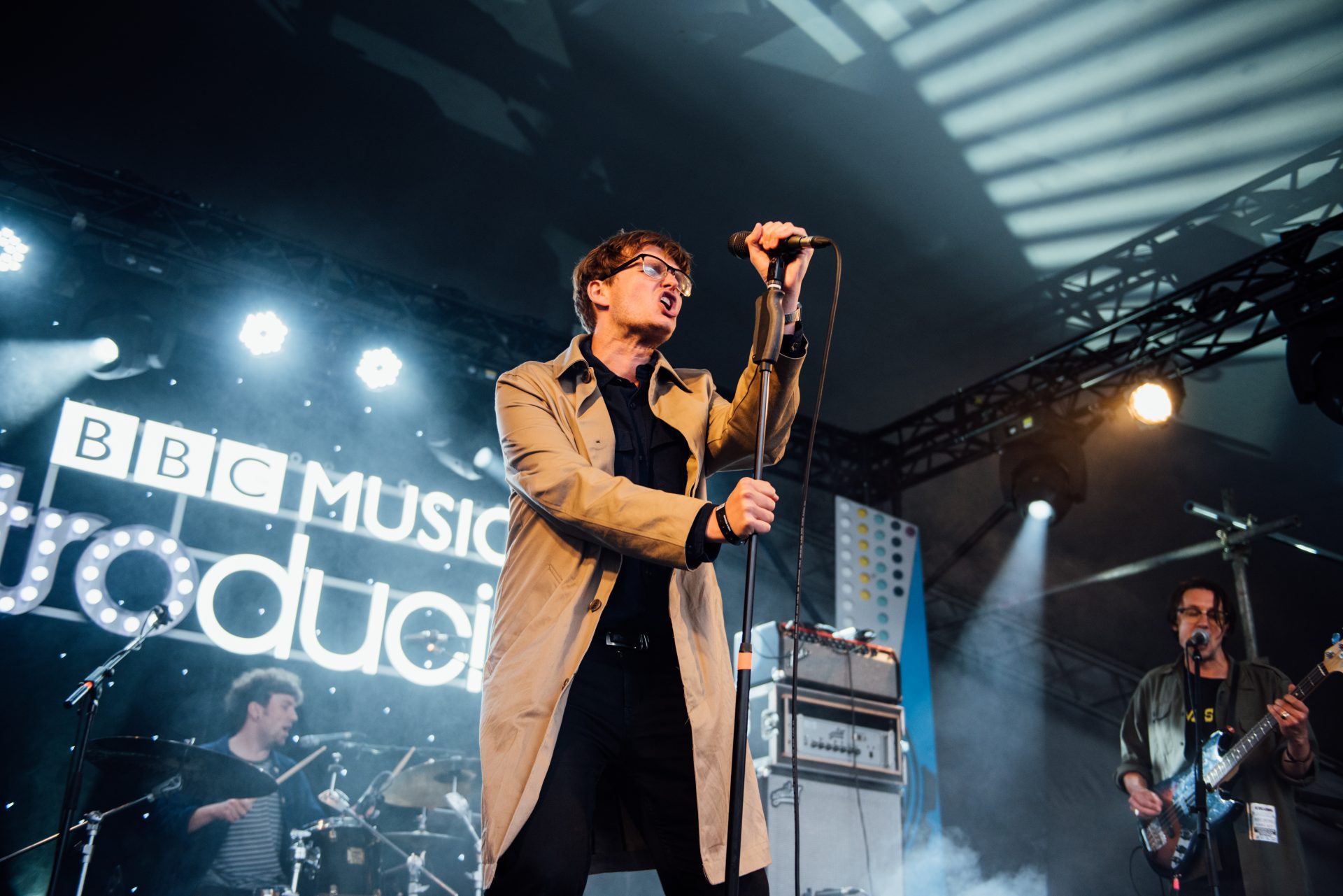 Yard Act: “I reckon we’ll be fourth top of the main stage in 12 years’ time”

They’ve just announced their debut album ‘The Overload’ for next January. Yard Act are ready to make their move – just in their own individual way.

Day three of a festival can be a low energy affair. A combination of everyone getting a bit excited in the first two days and the looming threat of a trek home with all sorts of camping gear strapped to your back doesn’t really lend itself to a party atmosphere. Luckily for us, as we catch up with them at this summer’s Reading Festival, nobody told Yard Act that.

Within seconds of arriving, talk has turned to guitarist Sam Shjipstone’s broken wrist, apparently the result of him “messing around on a moped like a prat”. From there, conversation swiftly turns to singer and lyricist James Smith’s previous life as a TV extra – “I used to just stand in the background on Peaky Blinders mouthing ‘I want to have sex with Cillian Murphy’ over and over,” he says with a grin.

“You know Cillian Murphy is a fan of Yard Act,” replies bassist Ryan Needham. “There’s probably a high chance you could have sex with him one day.”

From standing in the background while Cillian acts to finding out he’s a fan of your band (yes, we are ignoring the other suggestion in the above, thanks for asking). It’s a pretty good metaphor for Yard Act’s rise over the past year. Forming pre-pandemic and managing to record one song (the brilliant ‘The Trapper’s Pelts’) before the complete shutdown of the whole world, they can’t quite believe they’re now emerging to sold-out gigs and crowds of people who know all the words to their songs.

“It’s just all so fucking virtual, isn’t it?” says Sam. “Releasing music in lockdown is like the musical equivalent of being a drone pilot – just watching numbers and feeling complete disconnection from the audience that presumably sits behind those stats. It’s like some hyperreal satire of the 21st century.”

“There was some indication that we were heading in the right direction,” says Ryan. “We’ve all been in bands before so we could tell from the engagement and the comments on social media that there probably would be people knocking about in the real world when things did open up.”

Despite the relief of walking out on stage and realising they hadn’t been the subject of an elaborate, months long social media hoax, the band are keen to avoid taking it for granted. “It’s nice to push on really,” says James. “I’m not basking in it, as nice as it is to have people singing along at every show right now. We’ll probably go to Europe soon and nobody will have a clue!

“To be honest Reading & Leeds are a bit like that, because this isn’t a line-up where punters will necessarily know who we are, so we’re back in underdog territory. We play Green Man and you know that all of those trendy 6music listeners will have been forced to listen to us via that, but here? As long as people stick around, we’ll be fine.” He laughs. “there’s absolutely nothing worse than people walking around from the sound you’re making, it makes you want to stop the song and shout ‘what did we do wrong? What can we do to improve?’

“So far though, the reaction has been good – I reckon we’ll be fourth from the top on the main stage in 12 years’ time. That’s the plan anyway, then I can retire, or at least navigate a slow decline back down afterwards.”

The clock’s ticking then, with fingers crossed for no more lockdowns so that the band can make every second count. Having said that, it didn’t take long after forming the band for James and Ryan to record stream-of-consciousness, character-driven banger ‘Fixer Upper’, so if any band can rocket to the middle of the main stage in just twelve short years, it’s Yard Act.

“Graham [‘Fixer Upper’s narrator, a stand-in for every yuppie second home owner ever to exist] is a weird one actually,” says James. “the character is rooted in reality, but it’s an amalgamation of 10 plus people, with a little dash of some ultra-specific stuff in there, too. I do try not to take cheap shots at people, and I think I’ve managed that with the track, which – without blowing my own horn – is only possible with layered character development. Having said that, it is nice to step over the line and sneer every now and then. Everyone’s thinks they’re better than everyone else secretly, right?”

If ‘Fixer Upper’s Graham is what propelled Yard Act into the hearts, minds, and Spotify playlists of the public, the band are hoping their debut album ‘The Overload’ will maintain that forward momentum. Due for release on 7 January next year, it’s made up of 11 new tracks, a deliberate choice which reflects the forward progress the band have made since their first singles – not least in adding two more members to James and Ryan’s initial two-piece.

“Since Sam joined the band, we’ve really been able to push things a lot more,” says James, to a wave from Sam’s bandaged and broken hand. “I think we also made a lot more freedom for ourselves when we stopped trying to make the drumbeats sound like acoustic drums, because we were doing everything digitally – Jay Russell [drums] hadn’t joined yet when we did the album so we were down a real drummer. But when we just leaned into it sounding like a programmed drum beat, that was the real starting point I think.”

“We just started doing really harsh cuts where it’s clearly been looped, just playing around with stuff like that.” says Ryan.

“So yeah I think sonically it’s pushing beyond the sound of the stuff we’ve released, but lyrically it is more of the same.” says James. “The main difference is that we recorded it all together, so it’s got a theme running throughout it in the way that the first four songs don’t.

“That theme is money and greed – my greed!” He laughs. “It’s me grappling with the idea of these ultimate principles that just do not exist and are complete bullshit. You can totally bend on your own beliefs from time to time, which I never thought you could in the past. Then I had a kid and I just thought ‘fucking hell, if I wanna actually do this, I have to not be completely stupid with money.’ So I went from doing stuff because it’s fun and not looking at the budgetary side, to thinking about it constantly and staring at spreadsheets for the first time in my life.

“Based off of that realisation, the album is just me wrestling with the fact that I’ve had to look capitalism dead on in the face for the first time ever. After living in bliss and never needing anything and having very few material desires, to thinking ‘yeah you know what, maybe I should buy a house and look after my kid’ – it all changes.”

“Didn’t you refuse to go on holiday for like a decade at one point?” Ryan asks incredulously, to laughs from the rest of the band.

“Yeah that one caused many a problem.” admits James.  “Boycotting aeroplanes, which went out the window as soon as we got offered an American tour. Just me chasing the booker like ‘no, no, no, it’s alright now, I’ll fly!’

“I actually pledged to do a year without flying, but then the pandemic hit and it was just a very easy year. Maybe I am the virus in that case? Unless…WE ARE ALL THE VIRUS! We are the virus, nature is healing.” He pauses, adding. “If you put that last bit in you have to say I ‘smiled wryly’ or ‘joked with a laugh’ – people can’t think I’m serious, I fucking hate that shit.” He says, smiling wryly, and also joking with a laugh.

Taken from the October 2021 edition of Dork, out now. Yard Act’s debut album ‘The Overload’ is set for release on 7th January 2022.

The 1975‘s Matty Healy turned up to support Phoebe Bridgers in LA, and brought some unreleased songs with him

Rejoice! The live version of WILLOW and Tyler Cole‘s ‘Meet Me At Our Spot’ has arrived on streaming services