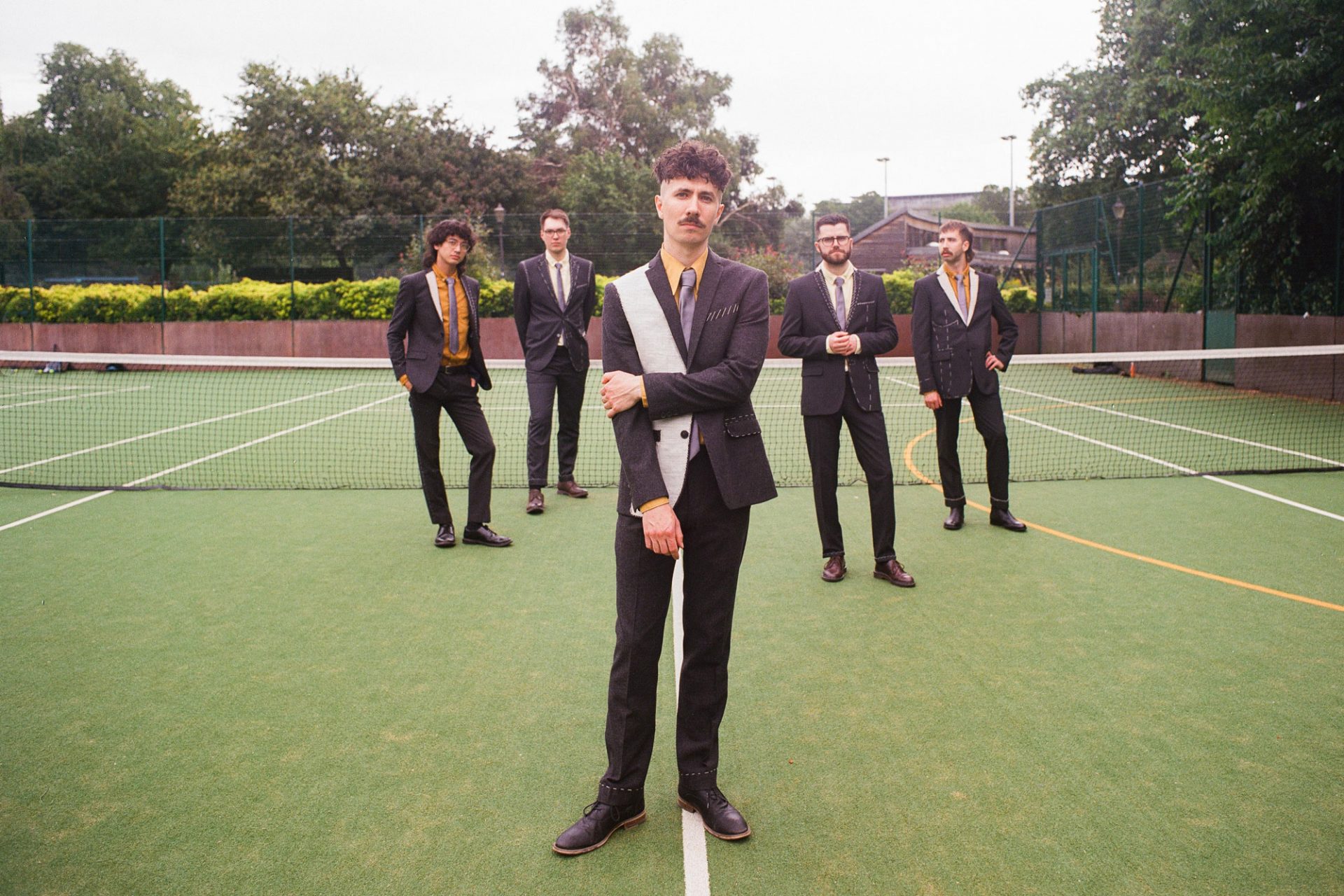 Youth Sector: “It’s healthy to feel like the worst band in the world sometimes”

With their EP ‘Adult Contemporary’, Brighton’s Youth Sector definitely have some stuff to say. Matched with some whip-smart bangers of substance, we pinned down frontman Nick Tompkins to find out more…

Hello Nick! What have you been up to today?
Thanks for speaking to us! You’ve caught me in the middle of finessing a new tune of ours, currently chopping things up, moving sections around and generally driving myself insane.

The new EP is great, obviously. What comes first for you when writing a song – the subject or the music? What do you most enjoy writing about, generally?
Thanks! The music comes first with the subject very soon after. Generally, we’ll start off with a musical bed, and I’ll riff some vocal ideas over the top; usually, certain improv lines will jump out as resonant or exciting, which tends to inform the theme of the song. That’s not to say the themes are a complete fluke, I’ve got a note on my phone of topics I want to write about, and I’ll use that to steer the ship in the right thematic direction. I usually end up writing about things that frustrate me – right-wing politics, climate change and all that fun stuff, but I’m also interested in character-based stuff. For instance, we’ve got an unreleased song about a fictional celebrity daytime TV couple going through a public and messy divorce…

One of the lyrics says “the bad news is that there is no good news”. Is it in some ways easier to write about a world on fire than one that’s all flowers and sunshine?
It is when you just don’t have the “flowers and sunshine” outlook. No doubt we’re all lucky and privileged to some extent in the West, but unfortunately to me, the fact that the world is on fire, nationalism is on the rise, and flagrant inequality has become completely commonplace seems a lot more urgent to talk about than how lucky we all are that the sun rises every morning and that summer is on the way again.

Being a British band at a point where borders are closing and touring is getting harder post-Brexit has its obvious challenges. The self-destructive nationalism is something you touch on – how much does it feel like opportunity is being lost for new artists because of it?
It feels massively like an opportunity that we are watching being missed in real-time while being seemingly helpless to change anything. Seeing the tories’ pig-headed approach to Brexit and hearing about the several chances they had to change course around work visas for touring musicians whilst inexplicably deciding not to, you have to see that as an act of violence to our own music industry and culture at large. I have no doubt that it will do long and short term damage to our culture, and we’re all losers for it.

“I usually end up writing about things that frustrate me”

Brighton has a rich history of great bands. Does coming from a place with that kind of track record and artistic atmosphere help you as a band, or do you think it’s sometimes harder to punch through with so many other exciting acts coming through?
I think it’s a bit of both, but mostly, it’s a help. With such a vibrant scene, it attracts great promoters and the opportunity to play with much better bands than your own, which drives your development. There’s definitely an element of oversaturation which can be tough, but I think ultimately, it probably drives bands to improve quicker in order to punch through.

How did you guys get together?
We all met at Uni in Brighton. If you thought that story was good, I’ve got a bunch more like that…

What did you listen to while you were growing up? Did you have a musical upbringing?
I had a fairly musical upbringing; my dad was pretty informative in terms of my music tastes. He got me massively into punk music (The Clash, Stiff Little Fingers, New York Dolls, The Stranglers etc.) which was my obsession from around age 10-16. I was always massively into Robbie Williams though way back to my earliest memories and still stand by all of his early albums (anything pre Rude Box) to this day, and that’s a hill I’m willing to die on.

When was the first time you really felt you were on the right track as a band? Was there ever a eureka moment?
I think we’re constantly having eureka moments, which are quickly followed by moments where you think you’re a bunch of talentless idiots. I’m working on a couple of tracks now, which, in the moment, feel like eureka moments in themselves, like something has clicked in the songwriting, which is exciting, but we’ve gotta ride the wave while it’s there because it rarely lasts for very long. That’s not a complaint; I think it’s healthy to feel like the worst band in the world sometimes.

What do you think is your biggest achievement so far? Is there something that you’ve got as a big goal for the future?
Last year, we played our first European show at Left Of The Dial festival in Rotterdam alongside some other great UK artists, which followed right off the back of tour supports with Courting and The Ninth Wave. I think that string of shows and being able to top it off with some great gigs abroad felt like our best outing as a band so far. So I think a goal for the future would be more of that, but eventually with us at the top of the bill.

Everyone has been held up because of the pandemic. How long has this EP been in the bag? Do you already know what’s coming next for you?
Yeah, we’ve had this down for ages, the EP was recorded by November 2020, so it’s been in the bag a while. We’ve got a whole heap of new material that we’re itching to get out; not quite sure what form that will take or exactly when yet, but it definitely won’t be such a long wait for the next release this time.

Taken from the March 2022 edition of Dork, out now. Youth Sector’s EP ‘Adult Contemporary’ is out 18th February.