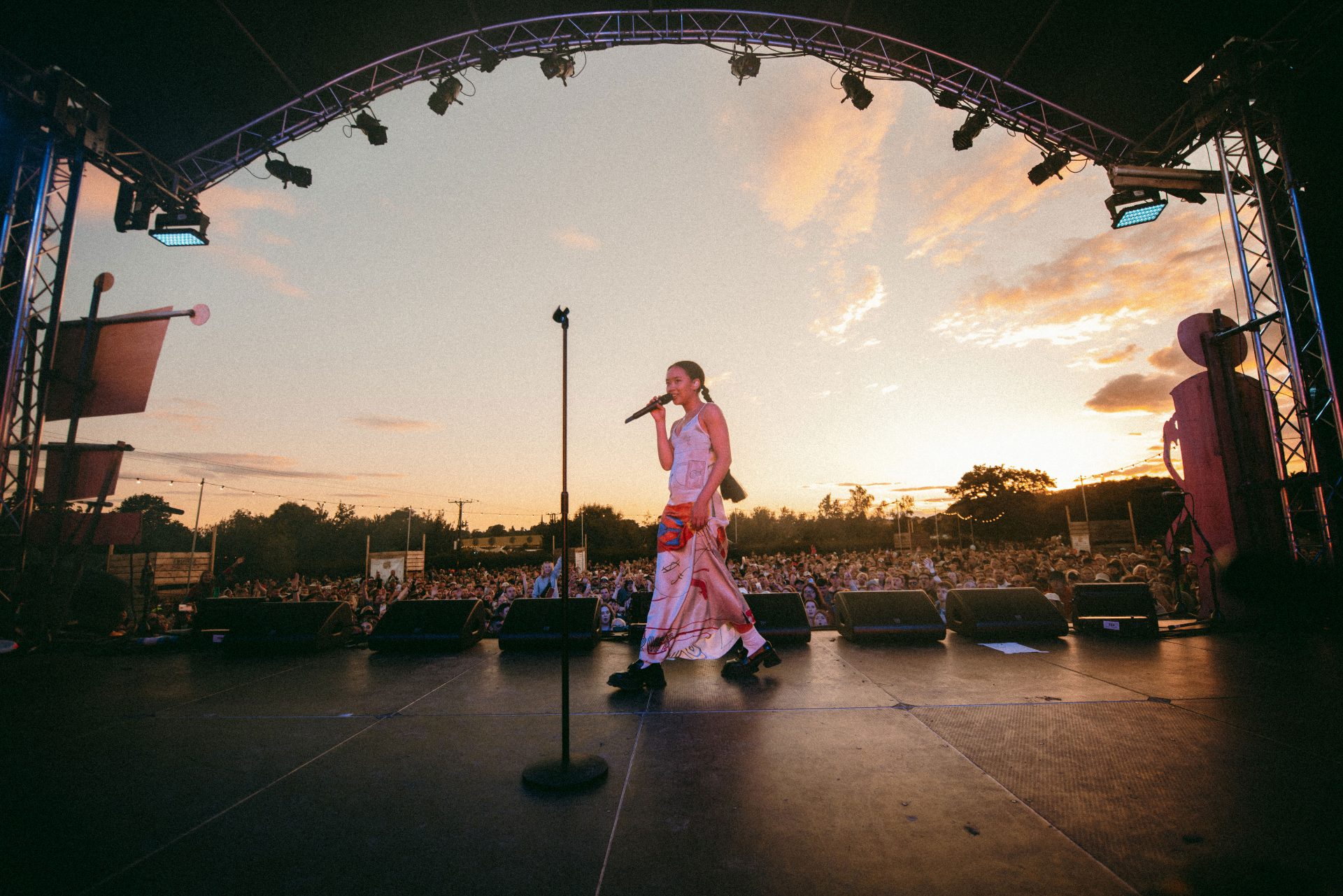 A festival with a fantastic track record for showcasing stars of the future, Barn on the Farm has its finger on the pulse and is often ahead of the curve; Lewis Capaldi was a returning favourite here for years before exploding into the mainstream. As you mooch around the cosy site, you’re equally likely to come across a future Reading & Leeds headliner, Radio 1 A-lister or a twee indie song set to bother your eardrums on the newest FIFA game. 2022 is no different, with an eye-catching line-up including Griff, Holly Humberstone and Beabadoobee descending on a cosy Gloucestershire farm.

Finally back for the first instalment since 2019, organiser Josh Sanger has mixed things up by redesigning the festival site, with the Outdoor Stage now sitting in a more spacious field and given an artistic makeover (adorned like a post-apocalyptic petrol station), allowing more freedom to put on a big pop show. The good vibes at Over Farm are unchanged however, the line-up blending familiar faces, up-and-coming acts that will hope for a Barn-to-arena ascent like Sam Fender and Capaldi have enjoyed, and a few established acts to sprinkle on some stardust.

Headliners at Barn roughly fall into two categories: returning favourites who’ve worked their way up the bill and won over repeat attendees (see Dermot Kennedy from the 2019 edition), and moonshot bookings from the daydreams of the plucky organisers (Maggie Rogers’ dazzling set last time around). Sunday night headliners Easy Life fall into the former category, at ease working a crowd they know like the back of their hand. Having just played the Pyramid Stage the previous week, it’s another example of Barn’s booking team getting ahead of the buzz and locking in acts before they blow up.

Saturday night’s main event definitely falls into the latter category; Bombay Bicycle Club clearly love their first visit to Over Farm, and the musical lineage makes perfect sense looking at line-ups over the years. The indie favourites receive a raucous reception as they close the Main Stage (located inside a tin barn, facing out into the setting sun), and are having a lot of fun as they show off tracks from their brilliant 2020 record ‘Everything Else Has Gone Wrong’.

‘Eat, Sleep, Wake’ is an addictive opener, wobbly guitar lines and repeating vocals insisting that you get on board, and ‘Is It Real’ keeps the energy up. Classic track ‘Shuffle’ reminds us just why Bombay are so revered in indie circles, and a cover of Selena Gomez’s ‘Lose You to Love Me’ allows the band to loosen up. We get a first listen of a new song, ‘I Want to be Your Only Pet’, before the four-piece bring the house down with an obligatory encore of ‘Always Like This’ complete with brass section tooting. With a lot of the weekend’s acts in the process of carving out their sound, here is a reminder of the kind of performance to aspire to; tight after years performing together, confident and dexterous enough to work the crowd without missing a beat.

Earlier in the day, Bombay’s singer Jack Steadman and drummer Suren de Saram guest with Flyte, getting a flavour of the easy-going camaraderie that defines the festival. The duo work through reimagined versions of their repertoire with help from rotating guests, with the Paul Simon homage ‘Mistress America’ getting toes tapping. Returning hero and Barn alumnus Holly Humberstone is also present, helping out Flyte before delivering a triumphant Sunday Main Stage performance. With most of Holly’s family and friends present, it was a heartwarming moment to hear her songs bellowed back at her. After spending the year supporting Olivia Rodrigo across America, this was a special homecoming.

Playing what she says is her first-ever festival early on Saturday afternoon, there are no nerves on show as Dylan (aka Natasha Woods) blasts through a half-hour of addictive power-pop. Taking time to warm the crowd up with a verse of Guns’ n’ Roses’ ‘Paradise City’, her own tunes more than hold their own, ‘Nineteen’ an earworm that rattles around long after she leaves stage. With a current pop-punk resurgence to ride, Dylan can hope to go far on today’s showing, which is fuzzier and more impactful live than her recorded work.

Occupying the second slot on the Main Stage is Beabadoobee, whose 90s-inspired alt-rock receives a curiously lukewarm reception compared to her fever-pitch headline shows; although we don’t see the pandemonium we’re accustomed to when Bea is onstage, the poppier ‘Last Day on Earth’ wins the crowd over and gets people “doobee doo” ing.

A few hours earlier, Sam Ryder gives a clue as to what this audience really wants, flamboyantly tossing his luxurious blonde locks and doing his best Freddie Mercury “hey ohh” impression. And, of course, we all get to belt out the Eurovision song. It’s all cheesy as fuck, but everyone’s having a good time, and isn’t that the point of all this?

Griff delivers a pop masterclass on the Outdoor Stage on Saturday, her confidence belying her youth as she smashes out hits’ Head on Fire’, ‘One Night’ and ‘Black Hole’. It’s a credit to the astute bookings here that so many of these acts have taken time out from larger stages to treat Gloucester to artists that bother the upper echelons of the charts.

On a sleepy Sunday morning, guitarist Eli Smart gets things going with an energetic blast of rock and roll that draws on his Hawaiian roots, combining staccato guitar strumming with lap steel flourishes provided by his dad, who looks chuffed with the whole thing. A fine musician with a unique spin on indie, it’s a refreshing start to the day.

Maisie Peters battles through technical issues as she co-headlines Sunday night, bringing out Gretta Ray and JP Saxe to duet, and embracing the importance of putting on a spectacle. Barn might be a step down in size from supporting Ed Sheeran in stadiums, but Peters gives it her all. The synth-pop ‘Pyscho’ gets a boost from a strutting keytar player, ‘Cate’s Brother’ is Busted rewired for 2022, and a supreme rendition of ‘John Hughes Movie’ closes things out in style.

One weekend highlight might be a simple pleasure, but The Vaccines are undeniable on a festival stage. After being surprise guests in 2019, they had so much fun they agreed to return for a ‘special guest’ slot on Sunday afternoon, packing out the Main Stage area. In under an hour, Justin Young stalks the stage, conducts the crowd and rattles through more indie classics than you can shake a stick at. For a band who will, to an extent, live off their massive debut album, it’s amazing how well they blend newer songs into their set, orchestrating singalongs just as loud for recent single ‘Your Love is My Favourite Song’ as they later elicit for a joyous run at indie anthem ‘If You Wanna’.

Roaring back to life after two years of gathering dust, Barn on the Farm reminds us just why artists fall in love with this little festival, and why they keep coming back. Big enough to attract indie big-hitters but small enough to make space for the next generation to earn their stripes, it’s great to be back in the Barn.