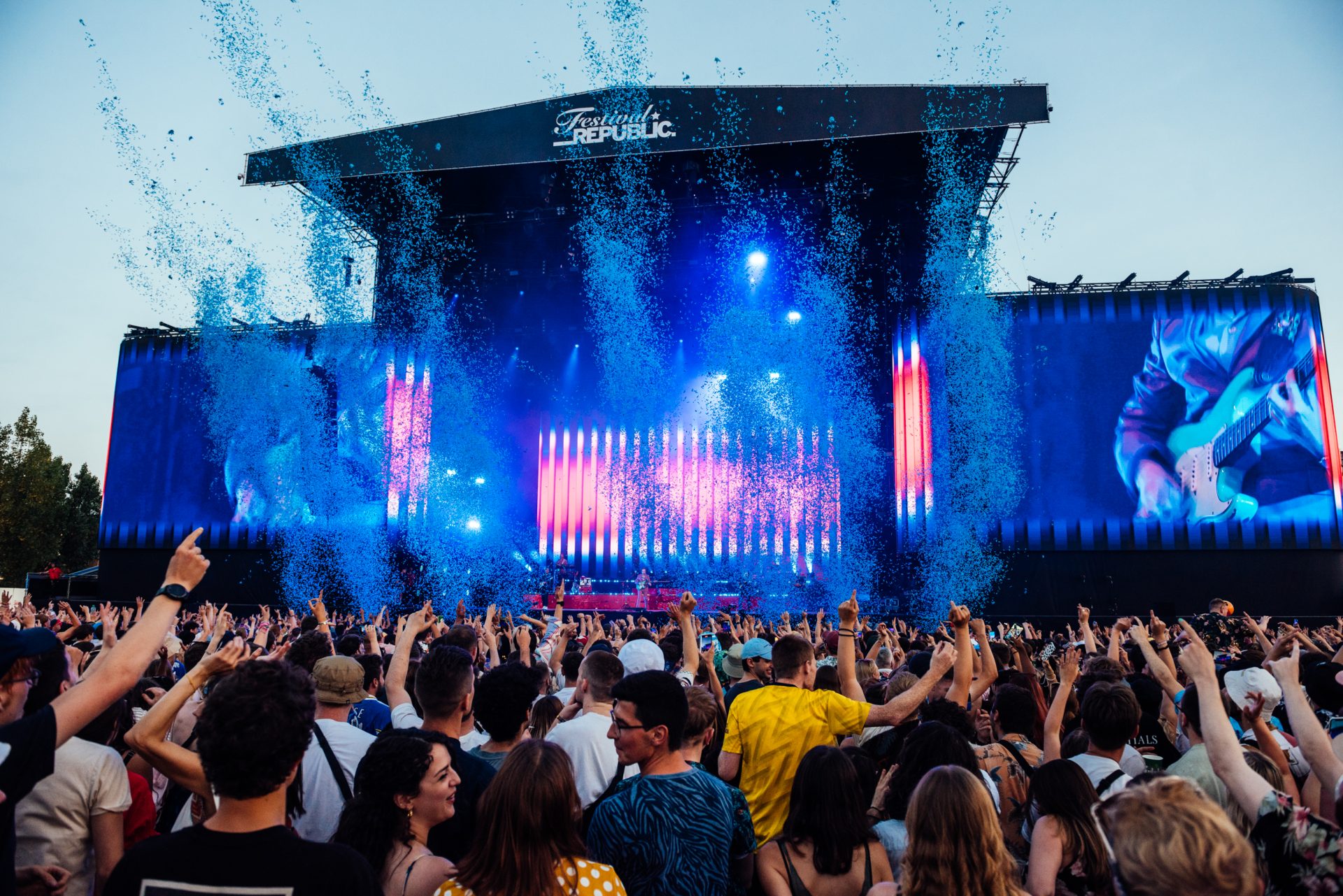 It’s fair to say we know a few things about indie – be it big arena icons, tiny club shows, or new names promising a musical revolution. Nestled in London’s Finsbury Park, Community 2022 is a genre’s state of the nation address that needs to be experienced to be believed.

“It’s warm,” observes Priestgate frontman Rob Schofield. Stating the obvious doesn’t stop him pounding and prowling The N4 Stage like he’s just devoured enough sugar to knock out the average man. Only adding to their status as one of the best new live bands in the country, it’s all heart-on-sleeve emotion as their mesmerising brand of punk meets new wave indie grips Community early doors. ‘Eyes Closed For The Winter’ and ‘Bedtime Story’ ensure they’re taking the mantle of discovery of the day for many. Equally flipping the script is Courting. With debut album ‘Guitar Music’ on the horizon, and Alfie Templeman joining them – because why not – their sound takes over the Main Stage with ease.

Today marks the first time that Crawlers have played a festival main stage – not that you’d know that judging by their command over their blistering mid-afternoon set. Crunching riffs and serves galore come from ‘Fuck Me (I Didn’t Know How To Say)’, ‘I Can’t Drive’ and new track ‘I Don’t Want It’, but it’s the manner in which they seize it all which means more. Whether it’s talking openly about anxiety and loving yourself, or simply letting loose as Holly Minto does on stage – it’s bold ambition that rings through. Closer ‘Come Over (Again)’ suggests Crawlers are the sort of gang you’d want to follow.

It’s pretty ace when you catch an artist getting better and better with each performance. By now, these sorts of moments are becoming an everyday occurrence for Alfie Templeman – but that doesn’t mean they’re any less as stunning. Feeling effortlessly at home on the Main Stage, a set that encompasses ‘Stop Thinking (About Me)’, ‘Candyfloss’, ‘A Western’, ‘Obvious Guy’, ‘3D Feelings’ and ‘Happiness In Liquid Form’ is a surefire sign of the breadth of his bubbling mind. A cheeky lick of ‘Smells Like Teen Spirit’ and The Wombats’ Moving To New York’ (“we could just play their whole set for them – maybe not,” he cracks), as well as a guest appearance from his dad Martyn thrown in for good measure, show Alfie Templeman is having a ball on a summer Saturday.

Firmly making a statement, Pale Waves fly in from a US tour to stake their claim to headline these stages in years to come. With that immediate star presence, it’s hit after hit that grabs Community by the shoulders. Whether it’s early cuts like ‘Television Romance’ and ‘There’s A Honey’ or singalong tender moments like ‘She’s My Religion’ and ‘Easy’ – they’re impossible to resist. Even more exciting is what cuts like ‘Lies’ and ‘Jealousy’ point to – emphatic anthems that already have fans moving in unison despite only recently dropping. With a leader like Heather Baron-Gracie blazing a trail, Pale Waves confirm their lofty intentions.

There may not be a more perfect definition of ‘scenes’ than when The Wombats open their early evening set at Community with ‘Moving To New York’. With a frankly ridiculous number of crowd-pleasing bangers served up at rapid speed, there’s no stopping the tens of thousands of people gathered from throwing themselves into each blast. Whether it’s the drowned-out singalongs of ‘Kill The Director’ and ‘Let’s Dance To Joy Division’, the whipped-up euphoria of ‘Lemon To A Knife Fight’ and ‘Greek Tragedy’, or the immediate refrains of newer tracks like ‘This Car Drives All By Itself’ and ‘Method To The Madness’ – The Wombats are kings of the big festival moments. Today is no exception.

If Community is the first time many fans discovered the world of Daisy Brain, it’s guaranteed to have been a top day. His distinctive brand of fuzzy grunge-pop is one born for balmy days like this: all surging singalongs, erupting riffs and dynamite potential. Bouncing across The N4 Stage, cuts like ‘Kleptomaniac’ and ‘Boring’ already sound perfectly at home. As Daisy Brain extends his hand to get onboard now – it’s impossible to resist.

Taking to the N4 Stage with a crowd practically bursting at the seams to get a view, Circa Waves are the talk of the town as the evening draws in. For good reason. Offering a ride across a career that has seen them build and evolve with each step, ‘Wake Up’ lights a fuse on Finsbury Park. Cue mosh pits and limbs in the air as hit after hit follows. Even sound issues and some eager tree-climbing from fans looking to get a peek doesn’t stop them – it’s a sizzling summer moment topped off by an unstoppable finale of ‘T-Shirt Weather’. A reminder of their standing and rich catalogue that’s only getting bigger; that’s how you seize the moment.

After such a stacked day, it’s easy to see how pressure may hit on Community’s headliners Two Door Cinema Club to close out proceedings in a suitably celebratory fashion. Two Door, though, have become experts at this game. For their first UK show in quite some time, it’s practically overflowing with – and we quote – “absolute scenes”. As the opening one-two of ‘I Can Talk’ and ‘Undercover Martyn’ lays out, they mean business. Each track is dialled up to the highest order. ‘Something Good Can Work’, Talk’, ‘Cigarettes In The Theatre’, ‘Changing Of The Seasons’, ‘Sleep Alone’, ‘This Is The Life’, ‘Are We Ready (Break)’ – it’s a pace that never relents.

Everything fits perfectly together. New track ‘Wonderful Life’ is a swirling world of keys, oomph and hooks. Whilst that may be the only slice of new music, tonight’s set still feels fresh at every turn. Whether it’s the stadium-sized blockbuster show that spans across gigantic screens, or the setlist that skips from singalong favourite to singalong favourite – Two Door Cinema Club have everyone tuning in.

As ‘Sun’ and a final firework of ‘What You Know’ round out the evening, the bright lights and sounds that ring across Finsbury Park are like those of a perfect house party, just super-sized. As a flag in the ground of modern indie? It’s doing just fine, thanks.