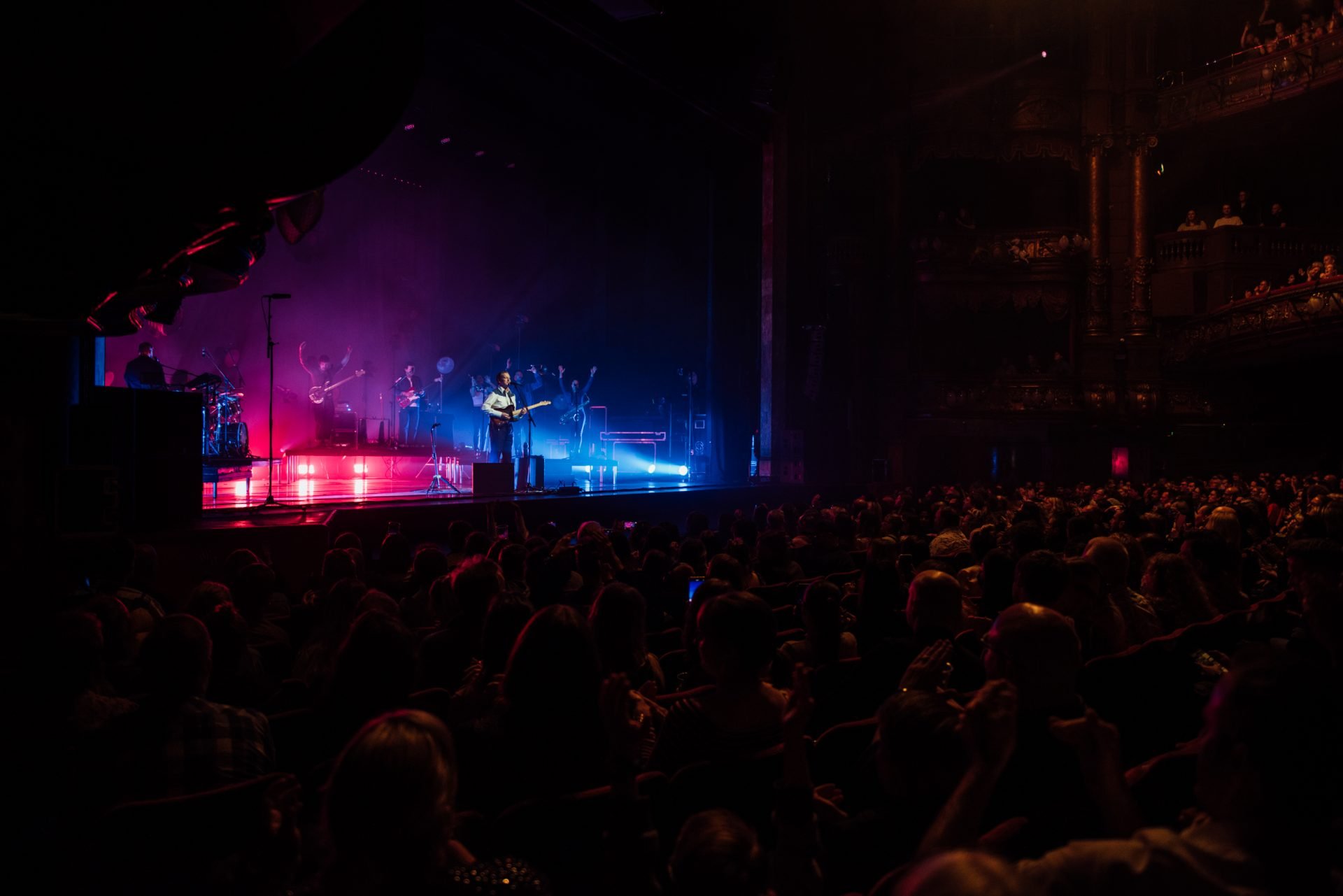 By this point a national treasure up there with David Attenborough and that lad who does TikToks about trains, George Ezra‘s loveable brand of mesmerising tales and heart-warming honesty has set him apart as one of the biggest names in British music.

Returning to the stage in the grand halls of the London Palladium, tonight’s comeback feels like an unveiling at his next insatiable chapter. The show being delayed by a late bout of chickenpox only adds to how grateful he is to be back doing what he loves most, and his set shimmers with everything that makes our Geoff a cut above. At times a campfire singalong, at times a bonafide superstar – he straddles the balance in a way that acknowledges his festival-topping status while still feeling like each person gathered is along for the ride with him.

It’s bubbling from the off. ‘Anyone For You’ already feels like a classic Ezra rider, while ‘Get Away’ and ‘Barcelona’ are a perfect distillation of the jumping throws to George’s game: arms in the air moments matching effortlessly with ripped raw bedside tales.

When his last album, ‘Staying At Tamara’s’, took off, his quick rise to festival headliner status was one he nailed perfectly – but with added time and warning, his show has grown leaps and bounds into one that knows the big-time places he’s about to conquer. Dropping ‘Pretty Shining People’ and ‘Listen To The Man’ early in the set is a moreish offering that sets the tone for what’s to come. It’s George, and it’s us – and that combination is a surefire route to good times.

Not missing a step despite almost three years away, there’s pleasure in the comfort. A hot water bottle of hits, it’s also a night that shows the breadth of his style. ‘Saviour’ is a gospel-tinged late-night ode, ‘Did You Hear The Rain?’ is a rollicking beast of a cinematic soundtrack and ‘Hold My Girl’ is a tear-jerking communal singalong. Every moment is wrapped around him, front and centre on stage, telling stories of what made these songs real.

Aside from the opening single, the only other taste of George’s hyped upcoming third album is ‘Green Green Grass’ – a sugar-sweet pop banger that could have been made from the desk of the biggest superstar DJs. With a backstory based on celebration in the face of death, it’s the ridiculous hit that’ll catapult his ascent even higher, with a chorus born for radio spins and summer montages.

‘Paradise’ has fans lifted from their West End seats, while ‘Blame It On Me’ has shuffling adulation from fans across the age pool. His ability to connect all of them is a rare skill, reaching across generations purely as a great human being that serves up tracks that snapshot everyday life. ‘Cassy’O’ punches directly, while in ‘Budapest’, George has the sort of peerless track that unites one and all.

Trading in escapism and universal hopes, tonight at the Palladium sees George Ezra return in a way that makes it feel like he’s never been away. The last true bop’n’roller is back, and it’s a very big deal indeed.