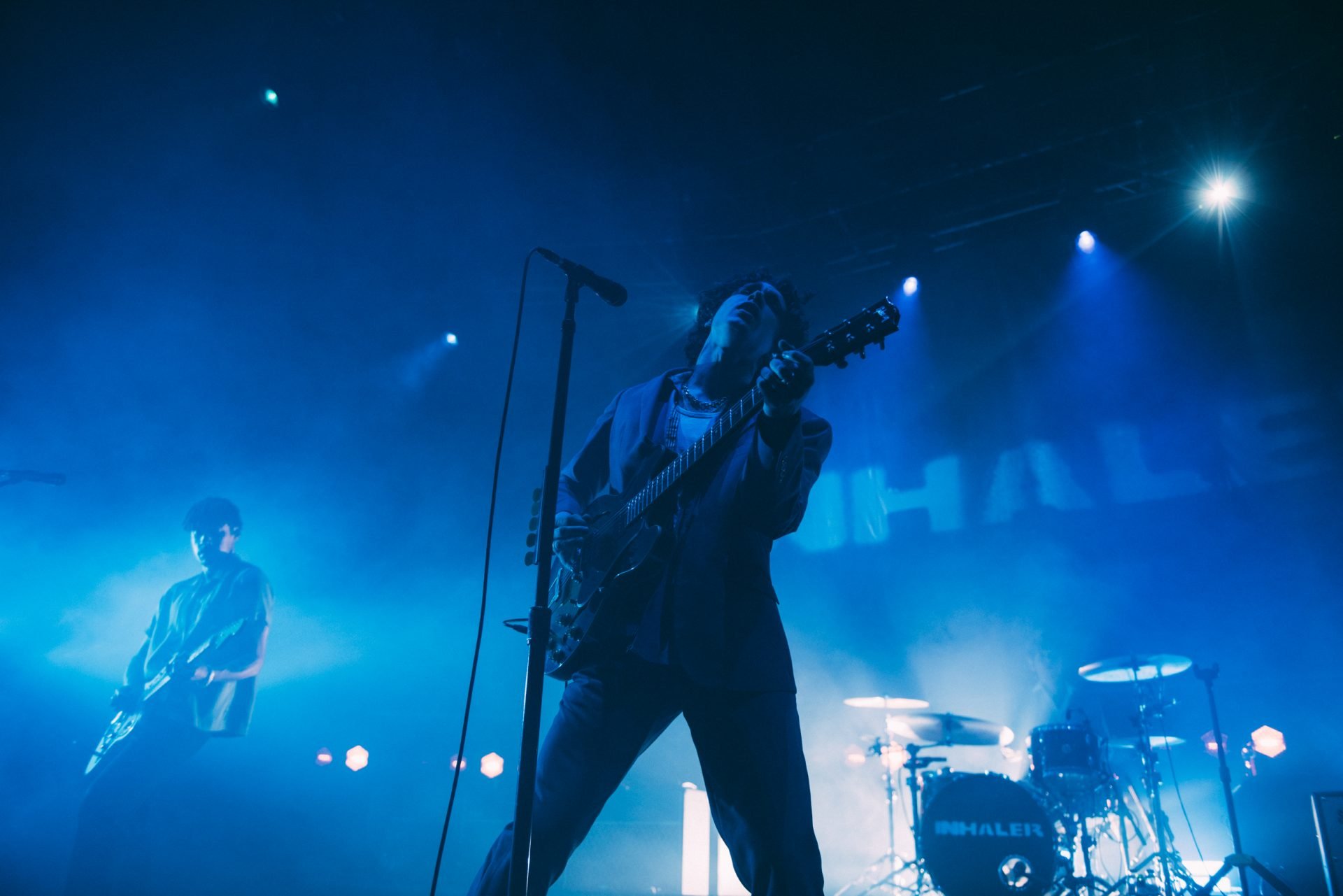 October 2021. Inhaler are storming London’s Kentish Town Forum in the sort of manner that makes you wonder if the walls holding up this venue can withstand it much longer. Coming towards the end of an opening chapter that took them from buzzy newcomers to bonafide leaders of a new pack of bands – it’s the sort of affirming show that leaves you more excited than ever for where they go next.

Fast forward almost exactly 12 months later, and that question is primed to be answered. With a rise that continues to grow even with just a couple of new tracks out in the wild, it marks the sort of unstoppable rise that has come to define Inhaler. Anthemic and euphoric, tonight at The Roundhouse is a grandstand preview of glorious ambition realised.

Illuminated in phone screens and bright lights from the very start, Inhaler storm through a set that explains the vast crowds in front of them. ‘These Are The Days’ lights a fire that never dims through a set that celebrates their journey so far but also shows off a newfound confidence that’s impossible to resist. ‘When It Breaks’ and ‘Who’s Your Money On? (Plastic House)’ – despite dipping and diving in intensity – are met with feverish excitement, while ‘Totally’ and ‘In My Sleep’ combine those worlds of scream-your-lungs-out devotion and electric circle-pits. It makes you wonder how in only one album (and a glimpse at the next), Inhaler have already formed the sort of devoted following most would only dream of. Thriving with swagger on stage, there’s a natural ease to their set – not by phoning it in or playing by numbers, but by simply being a band always made for this.

With every bounce and move, they race through a set filled with the swaggering charm of tracks like ‘Slide Out The Window’ and ‘My King Will Be Kind’ (the latter bellowed back in vast unison). They collide with the eruptive hit of ‘It Won’t Always Be Like This’ and ‘Cheer Up Baby’ in a manner that signals the uniqueness Inhaler have right now. Aside from glorious technicolour lighting, it’s a show whose star attraction is the band front and centre. Almost a callback to stadium-filling greats of the past, to do that less than a year on from a headline show celebrating the end of their opening chapter only signals how fast-paced the evolution of Inhaler is.

Whilst a beacon for an invigorating new chapter, tonight sees just three songs to satisfy the hunger for what comes next. Aside from opener ‘These Are The Days’, latest single ‘Love Will Get You There’ is a rapturous slice of Smiths-style technicolour release that bounces between The Strokes, The Rolling Stones and Northern Soul in one glorious cocktail. Yet it’s the unreleased ‘If You’re Gonna Break My Heart’ that cuts deepest. Finding Inhaler at their most earnest, it’s a wide-eyed ode to heartbreak where there is no hero or villain but instead just looks at what remains after the fact. It’s an added level of evolution that showcases how Inhaler are brimming with confidence and freedom.

A surging live act that can’t be denied, an ambitious band building on every success or the natural next steps of four mates living their wildest dreams – tonight at The Roundhouse says it all. Whilst most bands dream of these nights to crown a career, Inhaler seize it to launch a new phase. If ‘These Are The Days’ then tonight is not a chance to “be there” in the knowledge you can reflect back in the future – it’s a chance to live in the moment. This is Inhaler’s moment, and we’re in for a treat.

Inhaler are cover stars for Dork’s November 2022 issue, out now. To find out all about their new album ‘Cuts & Bruises’ – set for release on 17th February 2023 – order a copy direct to your door below.